Mozambique’s electoral commission should do the right thing 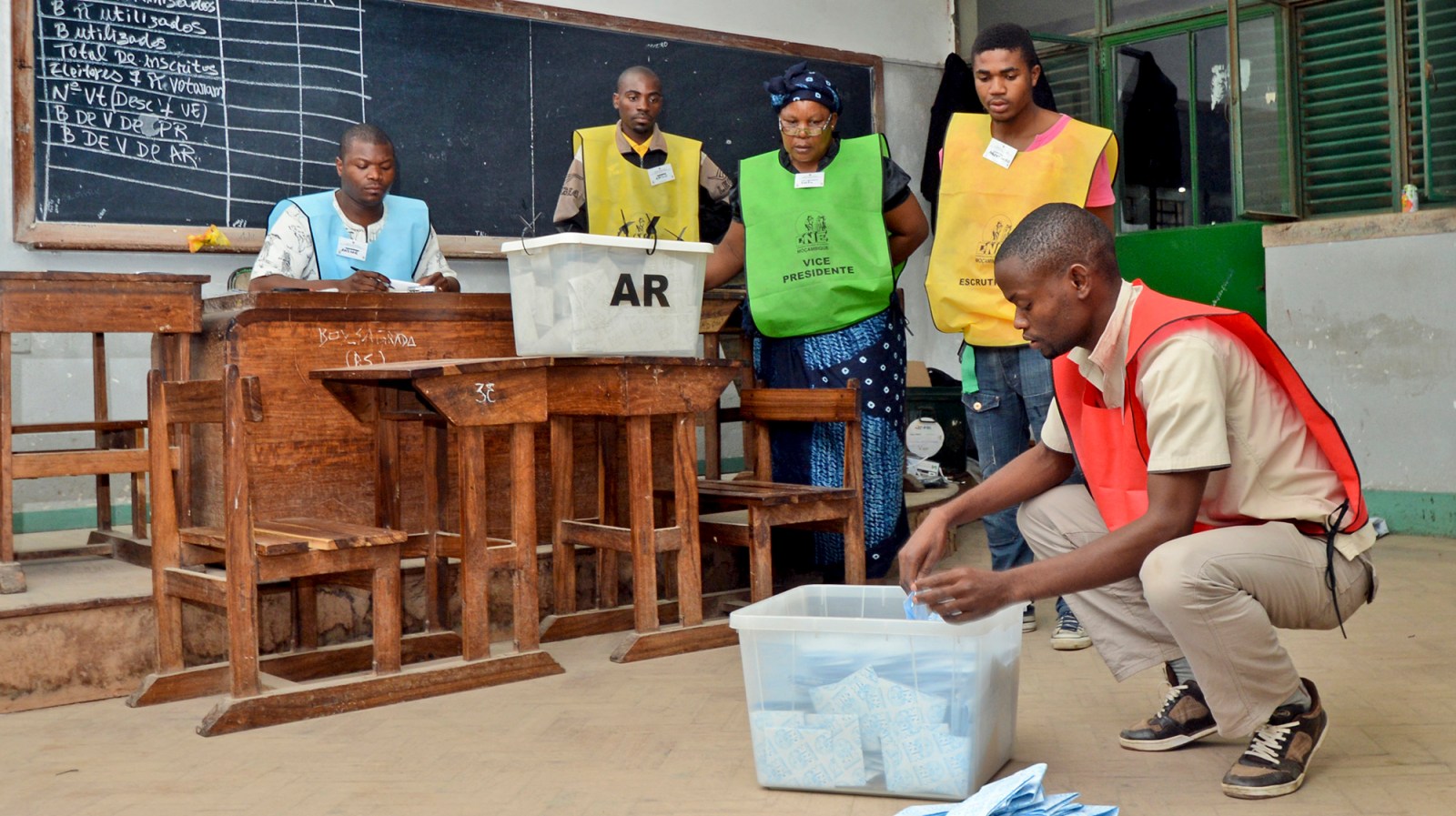 Officials of the National Elections Commission (CNE) of Mozambique count the votes in an electoral Assembly in Maputo, Mozambique, 15 October 2014. EPA/ANTONIO SILVA

An audit to remove doubts over voter registration figures would help achieve free and fair elections.

Tensions are mounting in Mozambique in the run-up to all-important elections on 15 October. A row has broken out over the results of voter registration that seem to indicate a bias in favour of provinces that are historically in the camp of the ruling party.

The opposition has called for an independent audit of the voters roll. They want to determine whether the large number of extra voters registered in Gaza province – up to 300,000 more than the adult population recorded in the 2017 census – was a deliberate move to inflate support for the ruling Mozambique Liberation Front (Frelimo).

President Filipe Nyusi is running for a second term at the helm. His main opponent is the Mozambican National Resistance (Renamo) leader Ossufo Momade, who took over after the historic opposition leader Afonso Dhlakama died in May last year.

Daviz Simango is leader of the Democratic Movement of Mozambique (MDM), an earlier breakaway from Renamo. The party is expected to get only a few percentage points in the polls, but he could be a kingmaker in the unlikely event of a second round of presidential elections.

The stakes are also high in provincial and parliamentary elections happening on the same day. For the first time, new legislation will apply because of a settlement between the government and Renamo. The former rebel movement has complained for years about the lack of decentralisation in the country. In 2013 it took up arms again to force a more equitable electoral system where provincial governors are elected rather than appointed by central government.

The results of local elections in October 2018 show that the race between Renamo and Frelimo could be tight. Despite Frelimo winning 44 of the 53 municipalities, it won only 51.8% of the total number of votes. In the aftermath of a massive debt scandal and a growing insurgency in the northern Cabo Delgado province, analysts say this election could be the toughest yet for the former liberation movement.

Following voter registration, the National Electoral Commission released the results in June. Parliamentary seats are allocated based on the number of registrations in each of the 10 provinces. Civil society groups and the opposition noted that the 1.116-million registered voters in Gaza province far outstripped the 830,000 adults in the 2017 census. In the last elections in 2014 Nyusi’s best score was in Gaza where he got 94% of the votes.

Provinces like Zambezia and Nampula, where the opposition is strong, suddenly have far fewer registrations than before. These new figures mean that Gaza will get eight extra seats in Parliament, while Zambezia province loses five seats and Nampula loses two.

The new figures were approved by the electoral commission, which comprises representatives of all political parties according to their parliamentary representation – meaning Frelimo members are in the majority.

The National Institute of Statistics meanwhile confirmed the concerns of the opposition and civil society. It is sticking to its figures and believes that Gaza province would only have such a high number of adults by 2040. The higher registration figures in Gaza could also affect the presidential vote.

Could these differences in the registration figures be the result of mere logistical obstacles? After all, Mozambique has struggled lately with thousands of people displaced by the devastating cyclones Idai and Kenneth earlier this year and the insurgency in the north. Until recently, people were also fleeing renewed attacks by Renamo. It could also be that the census was incorrect.

An independent election expert in Mozambique told ISS Today that it was unlikely the new registration figures were merely a mistake. The electoral commission had set itself certain targets even before the registration, which it accomplished by over 90% in most provinces, he said. In Gaza, however, it achieved a score way over 100% and in Zambezia far below target.

That means it deliberately targeted a higher registration figure in some areas and fewer in others than during the previous elections, the election expert said. (Generally registration is much higher than participation in the polls because a voter card can serve as a useful administrative document other than for voting.)

The expert believes it is unlikely that the National Electoral Commission will agree to an independent audit, “but it’s worth a try … observers will be coming to the country to assess the elections and this issue will play a major role in the credibility of the elections,” he said.

Mozambique analyst Joseph Hanlon says similar audits have been done in places such as Zimbabwe. Technology is available to do an audit in one week, with the necessary political will. Any duplication of voters could be picked up and the roll cleaned of ghost voters, at least for certain districts of Gaza province that show the biggest anomalies. This would contribute to the transparency and credibility of the process, he writes in the July issue of his election bulletin.

The electoral commission would have to move fast. A tender for the independent audit would need to be sent out and following the selection, the audit results would need to be available quickly before campaigning starts in August. If the findings end up in a change of parliamentary seats, parties would have to either withdraw candidates in some provinces or add new ones in others.

Opposition parties are willing to do this if it means the audit will remove doubts over registration figures. Given the tense context and the high stakes in these elections, the electoral commission should act quickly. Any questions that could scupper the credibility of the election even before voting gets under way, must be resolved. DM