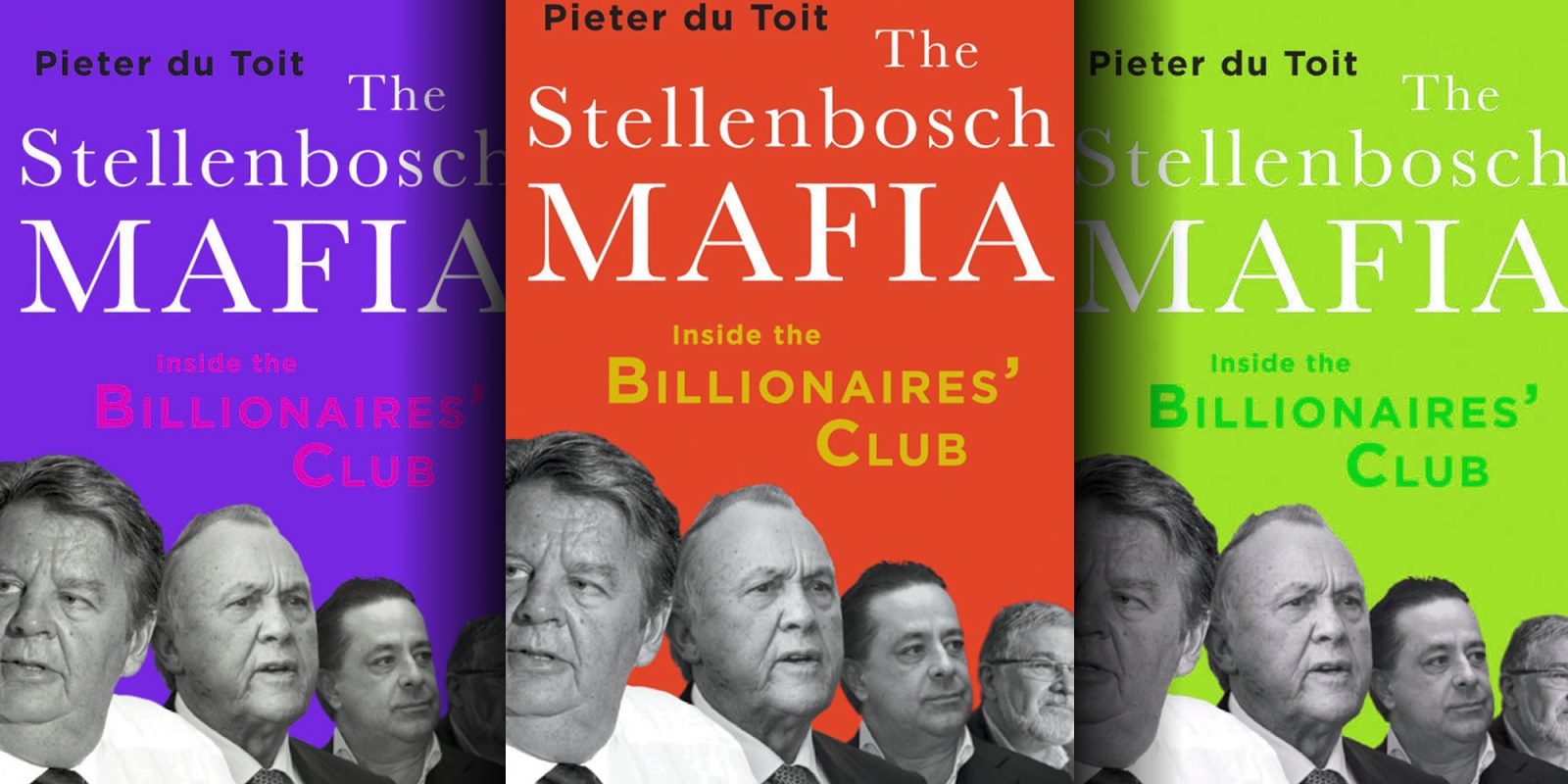 Pieter du Toit’s new book ‘The Stellenbosch Mafia: Inside the Billionaires’ Club’ (Jonathan Ball) aimed to find out whether there really exists a group of white Afrikaner businessmen influencing government and steering economic policy. Spoiler alert: the book concludes that there is no such mafia – but the scale of the money and clout it describes is still breathtaking.

That is the revelation contained within The Stellenbosch Mafia that EFF deputy president Floyd Shivambu at one stage was on pretty cordial terms with billionaire Johann Rupert – allegedly sharing a winelands lunch, advising Rupert on how to buff his public image, and asking for Rupert’s help in building a Limpopo hospital.

Shivambu has subsequently denied all of this on Twitter, while the EFF released a statement calling the book’s publication evidence of “the desperation of the Stellenbosch Mafia to capture the EFF”.

Du Toit remains unperturbed, telling Daily Maverick: “Shivambu has in the past denied many things – like his proximity to VBS Mutual Bank – and he repeated his denials to me. My sources for the reveal about his relationship with Rupert, however, are well-respected, on the record and not known for fibbing in public.”

The nugget of the Shivambu-Rupert exchanges is irresistible, given that the EFF has played a leading role in building up Rupert as the arch-villain of white monopoly capital. But it is a relatively minor detail in the book, mentioned fleetingly in the course of a much wider profile of Rupert.

Indeed, anyone who expects The Stellenbosch Mafia to be packed with similar tidbits exposing the interplay of businessmen and politicians will be disappointed. Instead, the book offers something quite different: a thoughtful account of how a few big-hitting Afrikaner businessmen came to make Stellenbosch their base, and an analysis of whether there is any merit to the suggestion that they have acted in concert to pull the levers of politics and governance behind the scenes.

Du Toit makes it clear from the outset that there is no denying the extraordinary financial heft of the likes of PSG Group founder Jannie Mouton, Mediclinic’s Edwin Hertzog, Shoprite’s Whitey Basson, Pepkor’s Christo Wiese, Naspers’ Koos Bekker, and of course Rupert himself. All these men have Stellenbosch connections: either through education, domicile, or the location of their business interests.

“The size and reach of the companies either founded or controlled by these businessman from Stellenbosch are enormous,” Du Toit writes. “Between them, they have major or direct stakes in no fewer than 16 of the JSE’s top 100 companies. This includes three among the top 10, seven among the top 30 and nine in the prestigious Top 40 Index.”

The biggest of these companies is Koos Bekker’s Naspers – yet Bekker and his media empire are absent from the book beyond these early mentions, despite Du Toit’s acknowledgement that Bekker is “regularly lumped together” with the other so-called Stellenbosch Mafia members.

It is tempting to conclude that Du Toit omits Bekker from his assessment because News24 is owned by Naspers – but, to be fair to the author, only two Stellenbosch businessmen are given the lion’s share of the pages: Johann Rupert (and to a lesser degree his father Anton) and Steinhoff’s Markus Jooste.

Rupert is an obvious choice, as the supposed “don” of the so-called Stellenbosch mafia. Jooste – the book implies, though does not state outright – is Rupert’s antithesis.

Where the Ruperts’ attention to detail is legendary, Jooste made business decisions based on gut rather than scrutinising balance sheets. While Rupert abhors ostentatious displays of wealth, Jooste swept into Stellenbosch and flashed his nouveau riche cash all over town, to the evident disdain of the Stellenbosch old guard. Rupert is a family man; Jooste was having a long-running affair.

In this telling, Steinhoff’s demise is as much a morality tale as a case of corporate fraud and mismanagement. It’s the ant and the grasshopper, with Jooste taking the latter role and Rupert the former.

Rupert claims he was always suspicious of Jooste, but that didn’t stop some of the other Stellenbosch heavyweights jumping aboard the good ship Steinhoff. Primarily, Christo Wiese, who lost an estimated $2.3-billion in 24 hours after Steinhoff’s collapse.

Records the book: “If [Wiese] had known about [Jooste’s] affair he would not have done business with Jooste, Wiese later said.”

That is a fairly jaw-dropping sentiment: that what could have saved Wiese from the most disastrous business decision of his life was not scrutinising Steinhoff’s balance sheets more closely, or inquiring where the money came from to wine and dine Jooste’s cronies in such lavish fashion, but discovering that Jooste was committing infidelity.

It’s also very telling. The Stellenbosch that comes through most vividly from du Toit’s book is not so much the town awash with money and influence – though yes, that too – but the town seething with gossip, rivalry, and social snobbishness, like a Boland version of the Monterey setting of HBO series Big Little Lies.

It’s this basic fractiousness that makes the “Stellenbosch Mafia” notion seem more implausible than anything.

PSG’s Mouton expresses it thus to Du Toit: “Some of the big mafia figures are – allegedly – Johann [Rupert] and Christo [Wiese], but they seemingly don’t like each other, which makes the whole Stellenbosch Mafia thesis laughable. And Whitey [Basson] and Markus [Jooste] never liked each other.”

But playground politics aside, what of the real politics? One of the rich men – they’re all men, by the way – interviewed by Du Toit insists that when these titans of business get together, all they discuss is their frustration at wanting to do more to build South Africa, but being stymied at every turn.

Rupert, meanwhile, comes across as progressively more embittered about being unable to pull political strings in the way his enemies suppose.

“There’s no inclination in the Ramaphosa government to involve Rupert in discussions about business or the economy. Or, it seems, to leverage his global network in favour of economic development,” Du Toit writes.

Rupert seems distinctly piqued about this – especially because the book makes it clear that his influence on the international stage is by no means imaginary. Rupert has the ear of Middle Eastern royals and Wall Street giants. In one anecdote Rupert tells Du Toit, he is phoned by an unnamed US investor – who sounds like someone on the scale of Warren Buffet – who asks Rupert whether he should short the rand. Rupert says no.

The effect of the anecdote is presumably intended to be evidence of Rupert’s nation-building commitment, in protecting the currency from this kind of speculation. But instead it comes across as, frankly, chilling – particularly when Rupert says later: “I don’t control the currency, but if I did decide to encourage people to short the rand, it will have an impact”.

Well, let’s just hope he never does that!

This is the paradox of the so-called Stellenbosch Mafia. On the basis of the book, there is no evidence to suggest a coordinated attempt by Afrikaner businessmen to influence public affairs or fiscal policy in South Africa. But that doesn’t mean their clout doesn’t exist.

Indeed, some of the book’s most interesting parts deal with influence-mongering on a much smaller stage than the conspiracy theorists imagine.

Take rugby at the University of Stellenbosch, for instance, which sounds in dire need of a book-length investigation on its own. When large-scale corruption involving the Stellenbosch rugby club came to light, a university finance officer said that although she thought the financial allocations were odd, “I was made to believe that rugby players had different rules to the other students.”

Or how about this little vignette about National Braai Day, mentioned almost in passing by Du Toit:

“It’s run by a guy called Jan Braai – real name Jan Scannell – whose efforts are funded by the Millennium Trust. The trust, by all accounts a billion rand or more strong, is a foundation run by Michiel le Roux, one of the founders of Capitec, and managed from Stellenbosch. Scannell, whose father was CEO of Distell, is married to the daughter of Claas Daun, one of the drivers behind Steinhoff. And Jan Braai is paid to organise braais and social media campaigns to usurp Heritage Day in favour of Braai Day.”

That may seem trivial, but from another angle it’s a pretty significant flexing of muscle to shape national culture. The so-called Stellenbosch Mafia members may complain about the Bell Pottinger campaign which brought the mafia narrative to the forefront, but initiatives like Braai Day can be seen as a not totally dissimilar form of influence-peddling.

And if the doors to the Ramaphosa administration really are shut in their faces, as The Stellenbosch Mafia suggests, maybe the cultural and sporting realms are the last available spheres in which Afrikaner businessmen can still buy influence.

There may not be a Stellenbosch mafia per se, concludes du Toit, but “there most certainly is an intricate network of a connected and privileged few, a network with access to vast reservoirs of human and financial capital”. DM