Maboneng: A new dream for a new decade

Maboneng: A new dream for a new decade 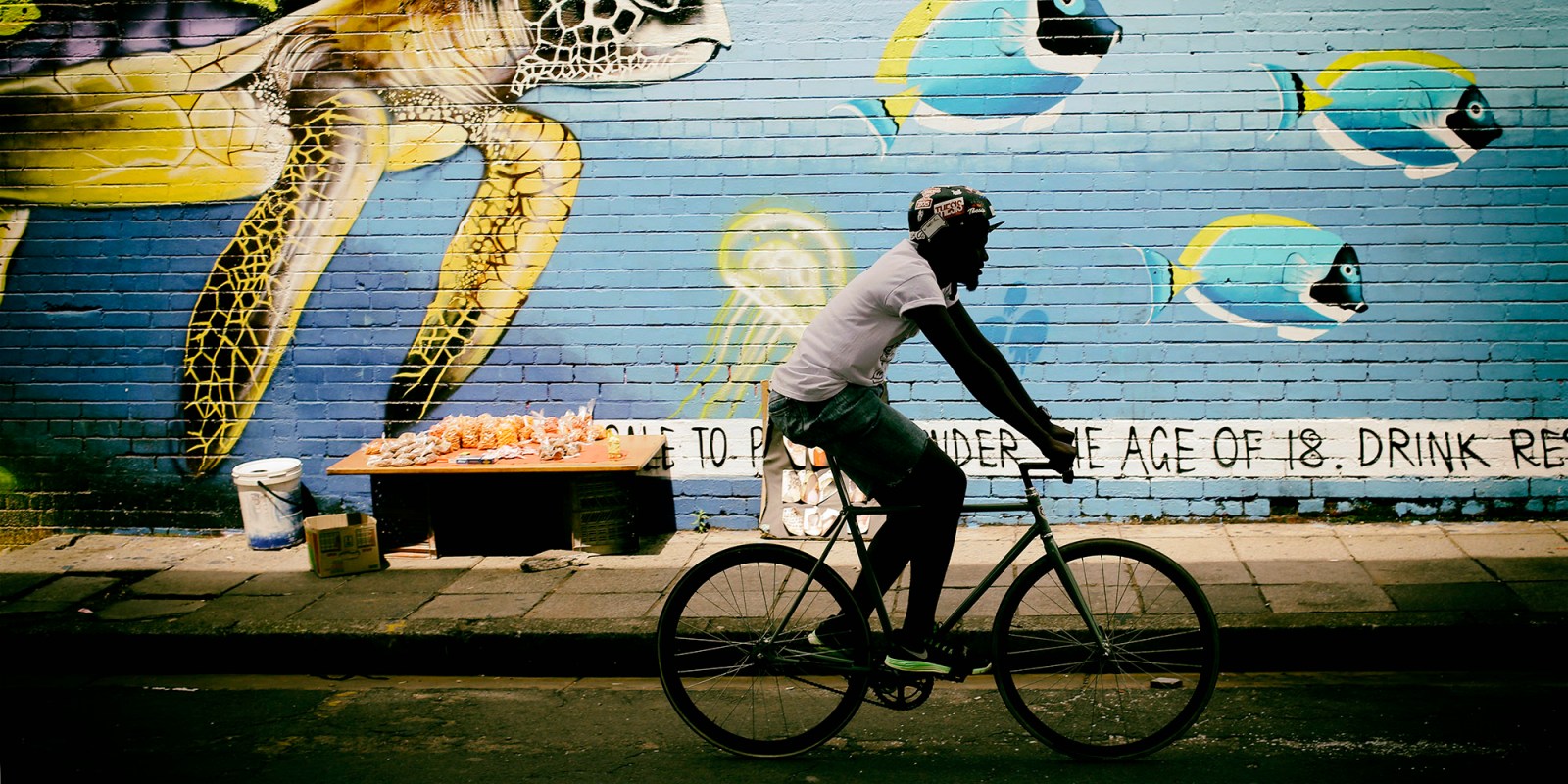 A man cycles past graffiti painted on a wall in downtown Johannesburg. (Photo: EPA / Kim Ludbrook)

The precinct on the east of Jozi turns 10 this year. It’s a little worn and weary, but still hopeful that its wonder years are what’s next.

It’s a milestone year for Maboneng – the precinct marks 10 years of rising on the eastern rim of Joburg as an audacious reinvention of the area demarcated on maps as City and Suburban.

In 2009 this “Place of Lights” was a dream come true in a mix of money, vision and an infectious urban regeneration agenda. Even as gentrification debates raged and naysayers predicted it couldn’t last, people came. For years they bought into the dream by investing, forking out for artisanal everything on rooftop bars and scribbling their aspirations on the “Before I die I want to …” public chalkboard. Maboneng made people fall in love with Jozi all over again.

Then the lights dimmed in 2016 with news that investment holding company RMH had bought shares in Propertuity, the property development company headed up by Jonathan Liebmann – who was Mr Maboneng. In April 2019, 18 properties in the Propertuity stable were sold at a liquidation auction.

But while Propertuity went bust, Maboneng has not. It is a changed creature for sure and now in its “life after Liebmann” phase, tenants and residents are finding their feet. It’s about balancing competing needs in a changed ecosystem and riding out the economic downturn exacerbated by the misery of the M1 highway closure that continues until October.

A Maboneng Civic Association was set up more than a year ago. Its priorities have been to claw back on security, street cleaning and regulating noise levels. These services and the enforcement of rules slowly evaporated when Propertuity pulled out – though the company paid proportionate contributions till transfer deals were finalised.

Now it’s down to voluntary contributions and negotiating rules with new property developers and business owners who aren’t governed by what used to be precinct-wide rules set by Propertuity.

“Voluntary contributions are always tricky and it means that we can only do as much as what we are able to collect. Around-the-clock guarding for just one guard costs around R24,000 per month, so it’s about trying to get the neighbourhood to take ownership,” says Camila Magner, general manager of Urban Space Management, the company employed to provide services for Maboneng.

The uptick in pickpocketing, phone snatching, public drinking, public urination, litter and harassment from impromptu car guards hasn’t gone unnoticed. Magner says they’re working to stabilise these problems and points out that it’s a challenge for a precinct that celebrates the fact that it’s not boomed off.

There are also problems with the increased night-time noise levels as more bars and clubs open. Lauren Mulligan lives in Main Street Life. She and her partner bought two bachelor apartments there in 2010.

“We wanted to be in the city and to live among young, community-minded creatives. But even when Propertuity was in charge there were problems with management. At one point my levies for a 34m² flat including parking were close to R1,300. There were hidden costs and we always had to raise levies for something or other,” she says.

In recent years, the precinct’s noise levels, security concerns and an eroded sense of community turned her off Maboneng.

“Our building’s WhatsApp group is always complaining about noise levels. When I was trying to finish my Master’s I had to move out because it was too loud to concentrate. People come here to party all night now, but we live here,” she says.

For Hayleigh Evans, who worked for Propertuity in the early days and lived in Revolution House for a time, Maboneng under Liebmann was a “testing ground and entrepreneur boot-camp” – perfect for her 20s, she says.

Evans says: “There was engineering by one vision without the full capacity to drive things as the precinct grew, maybe, but Maboneng will survive by responding to what its community wants now.”

These days she lives in the suburbs but still runs POPArt, a theatre she co-founded, and works at William Kentridge’s Centre for the Less Good Idea at Arts on Main (AOM). Kentridge has become the owner of a number of units at AOM. The heavyweight artist’s name in investment has had a steadying effect.

Mikhael Subotzky Studio has also been at AOM from the beginning. Medeine Tribinevicius is studio manager and is active on the AOM body corporate and the Maboneng Civic Association.

She says: “There’ve been lots of changes over the years and the precinct has its struggles and its strengths. It can be complicated because everyone has their own agenda and there are shifting players now. But the AOM body corporate and the civic association are trying to get productive engagement going to get buy-in from more tenants and owners so we can work together around shared goals and shared values that still exist here.”

She says Maboneng has always been about many disparate elements co-existing. “It’s a diverse community, it’s not about one group or one building that holds Maboneng together.”

Maboneng’s curated retail, craft and food outlets have been joined by pumping clubs and bars. Loosely regulated street vendors have popped up as long-established businesses relocated. The Museum of African Design (MOAD) is now largely empty space. Evans and another long-time Maboneng faithful, Bheki Dube, say the shift in character is not the end, rather another incarnation for the precinct.

Dube, who is founder and CEO of Curiocity Backpackers, believes Maboneng will find its stride again. His backpackers still attracts foreign tourists excited by the neighbourhood, he says.

“You can’t look at any neighbourhood development and growth with a linear perspective; it goes through changes. I believe Maboneng is ready for great new things,” he says.

Most notable is Jewel City, the hulking housing and retail development on the western side of the M1 flyover. The development is by Divercity, an urban property development fund made up of shareholders Atterbury, Ithemba Property and Talis Property Fund. It’s worth R2-billion and has an 18-month completion time-frame (end of March 2020).

“Jonathan [Liebmann] always envisioned a corridor for pedestrians between Maboneng towards the Towers and now it’s happening,” says Dube, who met Liebmann as a 17-year-old and abandoned his dreams of becoming a photographer to be an entrepreneur in Maboneng instead. Dube is about to expand the Curiocity brand to Cape Town and the Kruger Park.

Dube adds: “Jewel City will have a supermarket and a gym; it’s the kind of amenities that were lacking for Maboneng locals.”

Jewel City will have 2,600 residential rental units starting at R2,800 a month. It joins the likes of Drivelines, the shipping container building owned by Quorum Property Group on Market Street, in vying for occupants. Drivelines is at about 40% occupancy with a starting rental price of R4,900 a month.

The scale of the Jewel City development looks like reckless optimism to some, but Magner, whose company is also doing services management for Jewel City, believes developers have done their homework. Securing a rental, however, sometimes comes down to would-be tenants having to tick boxes like producing three months’ bank statements and letters from employers – a barrier out of step with the large informal economy in the city.

Back at Maboneng, a new business like Unknown Union in the MOAD space is hoping for the precinct to deliver on its promise. The designer fashion retailer and recording studio opened its doors in February, the most trying time of the precinct, just two months before the auction.

Manager Robert Moleleki beams as he shows the innovative architectural design that supports the retail floor, the studio and an intimate bar area. He says: “It was always our dream to open our flagship store in Maboneng among the creatives here – and now here we are.” DM