Is Tunisia turning a blind eye to illegal hunting? 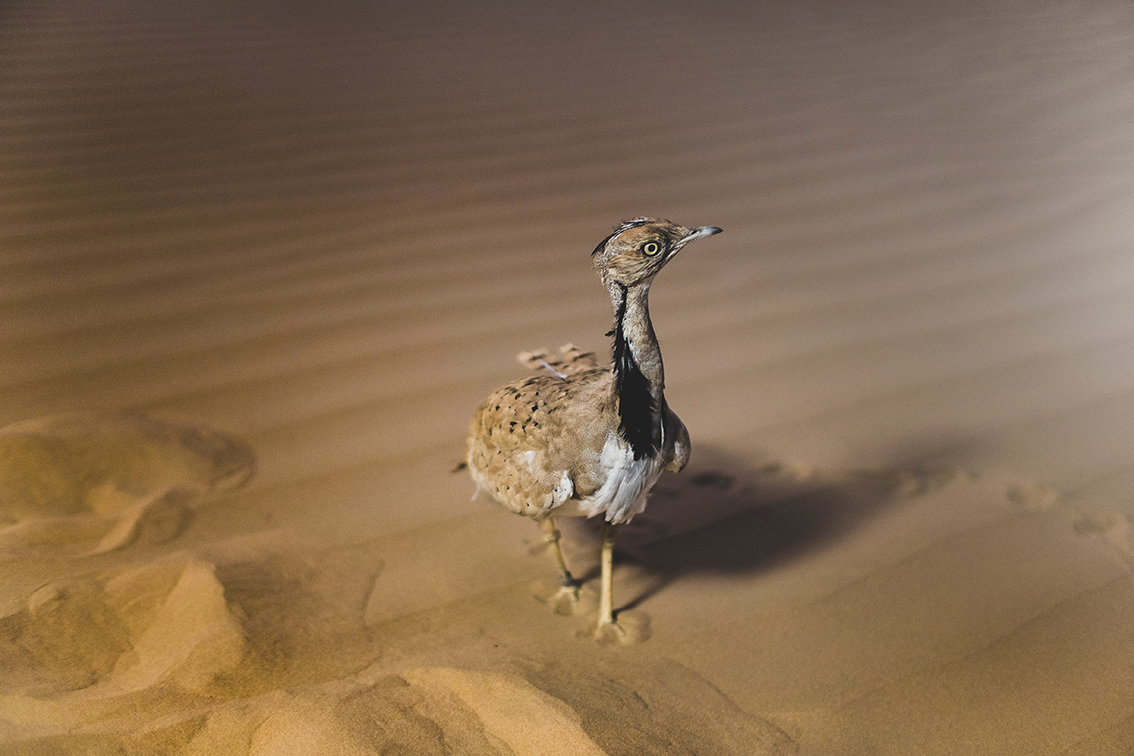 Photo of a houbara bustard by Zoltan Tasi on Unsplash

Despite strict controls, protected species are threatened by poaching and trafficking fuelled by Gulf states markets.

Hunting in Tunisia is strictly regulated, and hunting of protected species like houbara bustards is outlawed. Yet there are reports of large hunting parties in Tunisia – allegedly sanctioned by government. Together with wildlife trafficking in the region, poaching has become a serious problem that needs much more attention from government and civil society.

Data on illegal hunting and the illegal wildlife trade in the region is scarce. In 2015, a report by the non-governmental organisation (NGO) BirdLife International found that between 50,500 and 227,000 birds were killed illegally each year in Tunisia.

But according to the executive director of the NGO Les Amis des Oiseaux (AAO), Claudia Feltrup-Azafzaf, who contributed to the report, these figures are largely underestimated. “They are based on proven cases reported and extrapolated,’ she said. ‘We lack financial resources, and there is little awareness among citizens and authorities.”

In January, Abdelmajid Dabbar, president of the NGO Tunisie Ecologie, reported that Qatari nationals were illegally hunting protected species in the Tunisian desert using falcons and hunting rifles. Photos and videos distributed by activists showed a convoy of about 30 off-road vehicles, a helicopter, and the carcasses of Thomson’s gazelles, Saharan hares and houbara bustards. When confronted by conservationists, the hunters said the Presidency had given them permission.

The houbara bustard is a bird prized for its meat and organs, which are believed to be an aphrodisiac. Houbara hunting was traditionally carried out by falconers in Gulf countries, where the Asian variety of the bird was once prevalent. Hunting in the region became so intensive, however, that by the late 1980s the species was almost extinct.

After his rule ended in the Arab Spring, Qatari hunters – who were close to the new regime – soon took to the desert. Dabbar said the presence of Qatari humanitarian organisations on the Tunisia-Libya border along with business projects were enabling these expeditions to take place.

In an interview with France 24 in January, Qatari journalist Ali Al-Hill explained that Qataris had owned large stretches of land in the Tunisian desert since 2008, which had allowed them to hunt there legally. The interview provoked a strong public reaction in Tunisia, but authorities remained silent.

In Tunisia, hunting is strictly regulated. A licence to own a rifle can only be issued by the Ministry of Interior; and falconry is only allowed among local communities in the north-east, irrespective of whether it is on public or private land.

Protected species such as the houbara bustard cannot be hunted. The bird is classified as a species threatened with extinction in Appendix 1 of CITES (the Convention on International Trade in Endangered Species of Wild Fauna and Flora), to which Tunisia is a signatory. It also appears on the Red List of the International Union for Conservation of Nature as a species threatened with extinction. This follows the sharp decline of the bustards in North Africa over the past 25 years.

In February, Tunisia’s agriculture minister Samir Taïeb said on Express FM Radio that his administration had not authorised the January hunt. However his ministry did sometimes ‘receive requests by embassies in Tunis to organise such hunts,’ he said. But ‘those pertaining to protected animals are never granted,’ and in this case, they had not received any request. The Presidency has not yet responded to the hunters’ claim about receiving permission.

This episode is not an isolated case, either in the country or the region. The goldfinch – an emblematic North African songbird – is also trafficked in the Maghreb along traditional smuggling routes. Ornithologist Ridha El Ouni, told ENACT that ‘at the border with Algeria, a wild goldfinch is worth TND150 (€40). At the market in Tunis, a trained goldfinch can be sold for up to TND1 500 (€400).’

ENACT research on goldfinch trafficking found evidence that Moncef Bey Market in Tunis was a hub for this illegal trade, as well as for other protected species. In August 2018, the AAO alerted authorities to the presence of some 100 goldfinches, European greenfinches, pink flamingos and a booted eagle among the market stalls.

Feltrup-Azafzaf told ENACT that “our monitoring capacity stops at the General Directorate of Forestry, but we do not know what happens beyond that, and if the judiciary has taken legal action or not”.

The market for illegal wildlife trade in the region is vast. In 2014, one Saudi prince alone killed about 2,000 bustards in Pakistan in less than 10 days. How many birds could several dozen well-equipped and organised hunters have killed in Tunisia in January?

In Pakistan, where some Asian bustards still survive, limited hunting in exchange for a large fee has become a lucrative illegal business. It is also a source of political conflict between the country and Gulf states.

The January episode highlighted the many challenges facing state and civil society actors charged with protecting endangered species in Tunisia. A national strategy to stop wildlife poaching and trafficking would allow, among other things, for gaps in Tunisia’s laws to be filled. An official awareness-raising campaign about wildlife crime should also be conducted in partnership with civil society. DM