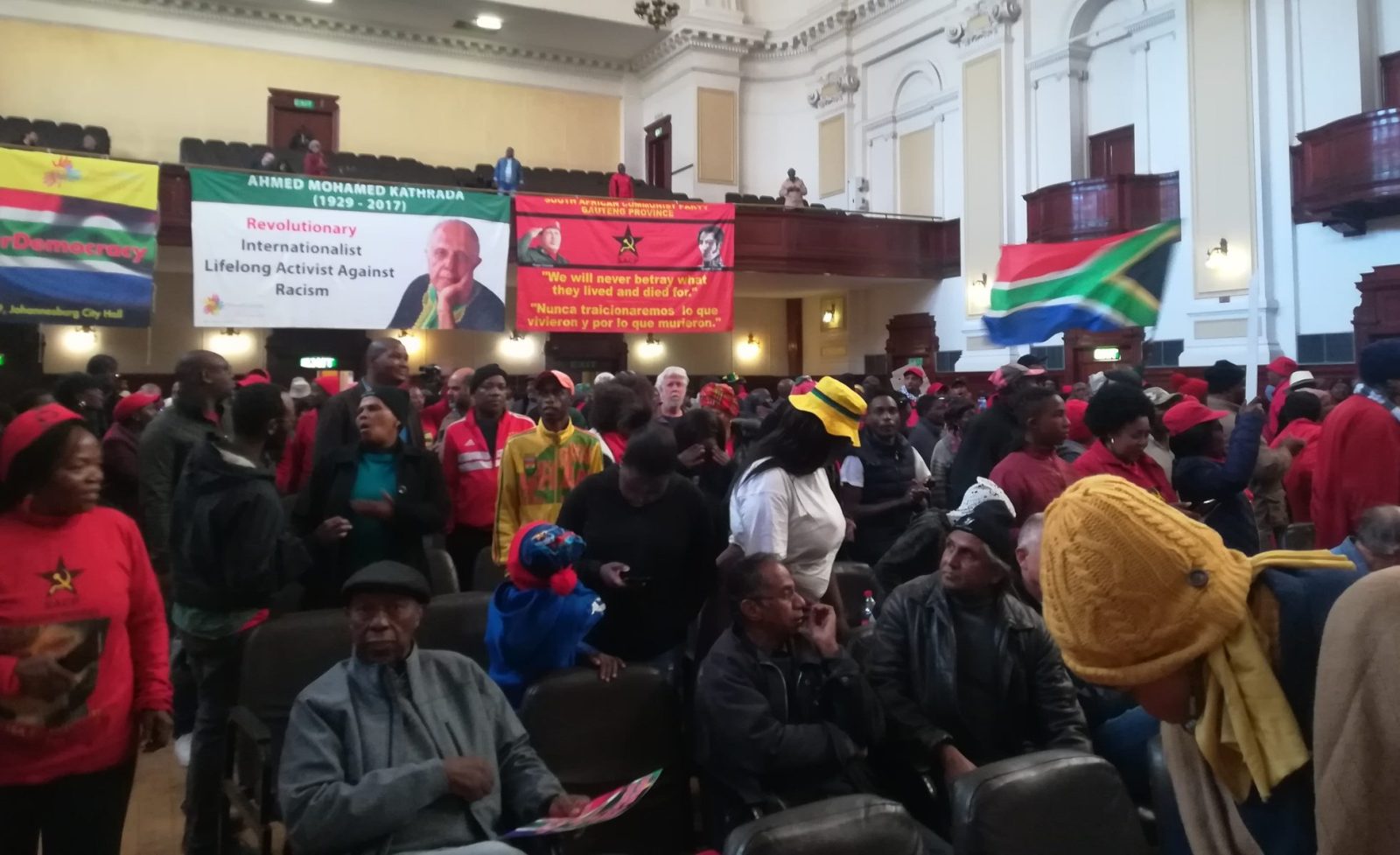 The Johannesburg City Hall was filled to capacity on Sunday afternoon as the Ahmed Kathrada Foundation, the South African Communist Party (SACP) and other civil society organisations held a joint rally against state corruption.

Posters reading “Defend our democracy”, “Defend our parliament” an“Reclaiming our values” were stuck on the walls of the hall.

The campaign was launched on 19 July following the appearance of former President Jacob Zuma before the Zondo Commission. The commission is investigating state corruption particularly under the administration of Zuma and the relationship between the Gupta family and the state.

It was endorsed by a number of civil society organisations including Amnesty International, SECTION27, Socio-Economic Rights Institute, Corruption Watch, Freedom Under Law and others.

Neeshan Bolton, Executive Director of the Ahmed Kathrada Foundation, said the aim of the campaign was to “defend our democracy” by fighting against state corruption.

He said civil society organisations partnered with a political party (SACP) because there was a common interest to fight state corruption, hold leaders accountable and protect those who had been victimised for fighting corruption, like Pravin Gordhan.

“PG [Pravin Gordhan] is human like the rest of us. He will make mistakes,” Bolton said. Looking to Gordhan who was seated in the crowd, he continued: “But we believe in your integrity and we stand with you.”

Deputy General Secretary of the SACP, Solly Mapaila, said the campaign was not for Gordhan specifically but it was largely inspired by him and aimed to protect anyone who was victimised for taking a stand against corruption.

He said corruption at Eskom was the reason why the state enterprise was in a major crisis and “the country was plunged into darkness”.

“We must all unite as South Africans in our diversity … and say that this will not be allowed to continue,” he told the crowd.

Mapaila also took a jab at EFF Commander in Chief Julius Malema, calling him “the real constitutional delinquent” and “commander in thief”.

He accused Malema of benefitting from unlawful tenders in Limpopo. “We can’t allow fascism to take root in our country and clothe itself in our [red] colours,” said Mapaila.

He said radical economic transformation was needed but it was something that should benefit everyone in the country, not just the elites who steal from poor people.

Representatives from various organisations also spoke about their reasons for joining the campaign.

Mark Heywood, former director of SECTION27, said the campaign was about equality and social justice. “Corruption kills indiscriminately but it kills the poorest and most vulnerable people first.” He referred to the tragic death of Michael Komape – a six year old boy who drowned after falling into a dilapidated pit latrine at his school in Limpopo.

He said the Life Esidimeni tragedy was also a result of corruption. “140 men and women died because tenders were given to non-existent NGOs and people who were not qualified. The health department has become a feeding ground for thieves.”

Nicole Fritz, Chief Executive Officer of Freedom Under Law, said the organisation believed in the founding principles of the Constitution: equality, dignity and freedom. She said constitutional rights of citizens had not materialised in a way that it should have during democracy and “we most certainly will not realize our Constitution if we don’t confront state capture”.

Derek Hanekom, chairperson of the Ahmed Kathrada Foundation and a former cabinet minister, said it was unrealistic to think that South Africans would sit back and watch their democracy being threatened. “This democracy that we fought for came with a lot of pain, sacrifice and loss of life,” he said. “President Ramaphosa does not have a magic wand to fix deeply broken institutions … but the process has begun and we should support that process.”

Hanekom said democracy is only as strong as its active citizenry and he urged people, especially the youth, to unite and fight against state corruption. DM