Read an Excerpt from Pieter du Toit’s new book, The Stellenbosch Mafia: Inside the Billionaires’ Club. 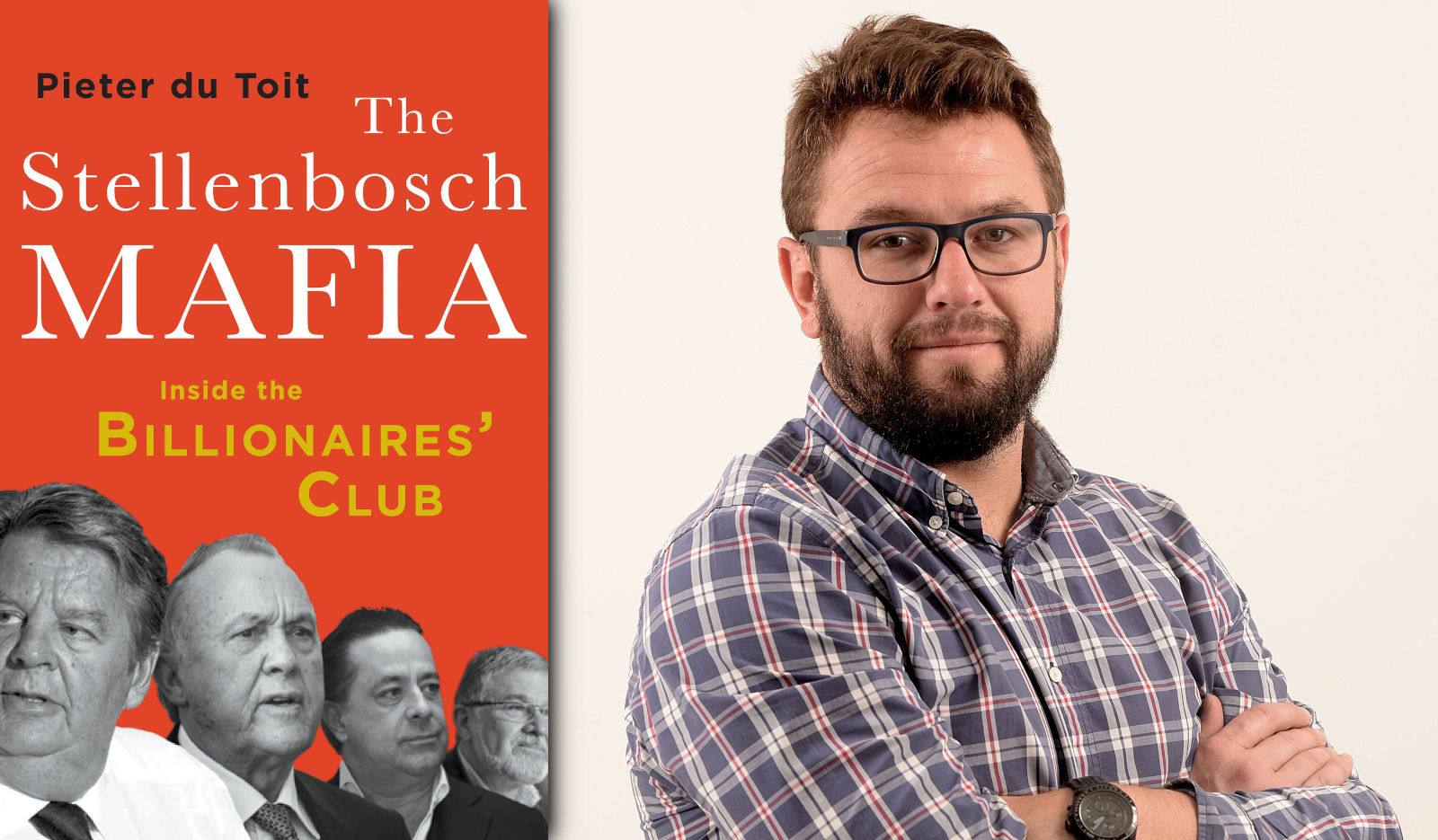 The picturesque town of Stellenbosch, nestled against vineyards and mountains, is home to some of South Africa’s wealthiest individuals: all-male, most of them Afrikaans – and all fabulously wealthy. In his new book The Stellenbosch Mafia: Inside the Billionaires' Club, Pieter du Toit examines this “club” of billionaires to determine whether the town has an outsized influence on South African business and society.

In the following excerpt, Johann Rupert, one of Africa’s richest men and a member of the “club”, reveals the details of the Bell Pottinger-orchestrated campaign he alleges was launched to discredit him, and denies he has ever been involved in state capture.

In November 2016, Rupert received a text message from a contact in the ANC. The message confirmed to him something that he had long suspected: there was an orchestrated campaign afoot to discredit him, his family and his companies. ‘They’re coming for you. The Guptas have hired Bell Pottinger to push the “state capture” story onto you. They’ll earn R24 million, plus expenses, for their work. It will be paid by an intermediary,’ the text message read.

It went further: ‘It seems to also be slightly personal, about Edward Zuma and the cigarette trade. They also believe you are funding Maria [Ramos, then Absa’s chief executive], Trevor [Manuel, married to Ramos], Pravin and [Mcebisi] Jonas [then deputy minister of finance]. Apparently Zuma is on the front foot against Thuli and massive cabinet changes coming. Bell Pottinger [are the] brains behind the attack on you …’ (11)

Less than two weeks later, Richemont’s contract with Bell Pottinger, a London public-relations firm that had been contracted to the company for more than 18 years, was terminated by Rupert. At Remgro’s annual general meeting he railed against the firm, disgusted by a company he had long trusted. ‘Whilst they were still in the employment of Richemont, they started working for the Guptas.’ Their task, he explained, was to deflect attention from state capture allegations involving the Guptas and target Rupert – a client of theirs! (12)

Rupert denied that Remgro unduly influenced the media or that he was involved with state capture. ‘We have never done business with the state … ever. Firstly, I didn’t trust the previous bunch, and I don’t trust these guys. We have zero influence on the media or the media companies we are invested in.’ He says that has never been to the offices of eNCA, a company in which Remgro has a stake, and he doesn’t even know where the offices of Caxton, in which the company also has a stake, are. During apartheid he was branded a ‘verraaier’ (‘traitor’ in Afrikaans). ‘The attacks used to come from the right, now they come from the left. It’s not fun … and it’s steered by Bell Pottinger. I’m saying this publicly now. It is well known in the press about how well this campaign is orchestrated to protect a certain family and a certain individual.’

By that time, Rupert had been the target of a sustained and vitriolic social-media campaign – run by Bell Pottinger, it would later emerge. The company had been contracted by the Guptas and Zuma’s son Duduzane, to counter the rolling coverage in the media of the Indian family’s apparent undue influence on the head of state, the ANC and government.

Rupert’s image was regularly satirised by the army of anonymous users on Twitter, many of them part of the network and narrative spawned by Bell Pottinger. The Rupert name was used with the hashtag ‘WMC’, or ‘white monopoly capital’, and gained traction as the family was positioned as the torchbearers of exploitation and capitalism. One Twitter account, created by Bell Pottinger, published an image of fat, rich, white people gorging themselves while emaciated black people ate crumbs off the floor. One of the fat, rich people resembled Rupert. (13)

Rupert initially merely expressed concern that Bell Pottinger was aiding the state-capturing family and communicated it to the company. But Bell Pottinger’s Victoria Geoghegan, who ran the lucrative campaign, wasn’t to be swayed. ‘As we have known from the start, we are in the middle of a civil war, with the Guptas and allies on one side, and Johann Rupert and others on the other side,’ she wrote in an email to the company’s bosses. ‘More mud will inevitably be thrown. However, it is difficult to turn down such a large retainer.’ (14) Lord Tim Bell, one of the company’s founders, said he had been opposed to the contract. ‘It was the wrong thing to do. Johann Rupert was a client. And I wasn’t sure why we were doing something against his interests. I instructed everyone to stop working for the Guptas, and they completely ignored me,’ he claimed. (15)

Zuma sat behind it all – Rupert’s vilification and that of his name and his family – Rupert believes. ‘He drove a campaign against me because he couldn’t control me. He did everything to get dirt on me: got people to watch me, investigators overseas, set up immigration officials against me, SARS, the Hawks, the NPA [National Prosecuting Authority] … all of them looked at my affairs,’ he says. ‘What can they do to me? Nothing … In the old days, you could take a factory, but today it’s all about intellectual property rights. And they can’t take that.’

The Bell Pottinger campaign and subsequent assault on him and his name – the association with white monopoly capital – have hurt his family. He says it was a relief the day he turned on the television to find that the Guptas’ news channel, ANN7, was no longer on the air. (16)

Rupert, who has always been vocal about his loyalty to South Africa (his private plane bears the national springbok symbol), has started to doubt the country’s future. His children live in England – he thinks it’s better that way. ‘When they are here [in South Africa] we don’t sleep. When they were here, they couldn’t go out into public without being insulted. It affected my family.’

The self-styled Afro-optimist doesn’t believe he’ll stay in the country if things don’t change drastically. ‘I’ve told some in government and the ANC in private as much: if SARS ever again tries to sabotage me … I have been by far the highest individual taxpayer in this country for the last twenty years. Our family companies are the biggest payers of dividends from outside into the country, more than what the rest of the JSE does combined. We have never taken money out of the country, I promised Dr Gerhard de Kock [a past governor of the South African Reserve Bank] that if he allowed me to build Richemont overseas, I wouldn’t take money out. The value Remgro and Richemont created through BAT is immense.’

He’s angry at being considered the face of white monopoly capital and says that former president Thabo Mbeki understood his family businesses. Mbeki, Rupert says, explained that the government (thanks to investments by the Public Investment Corporation) owned twice as much stock in Rupert businesses as the family itself did. And he adds that he’s given away his salary since 2005. (With his estimated personal wealth of $5.9 billion (17), he can surely afford it.)

‘At the age of 69 I’m therefore working for the state and third parties … and I’m going to stop, I’ve had it up to here. I am not going to be taxed three times for the same earnings. I pay tax overseas, I pay tax here, and they [SARS] want to argue over rubbish while, in actual fact, they owe me money!’

Rupert believes his phone has been tapped for years because his enemies are convinced he controls the currency. He doesn’t, he says. But if he wanted to, he could cause some damage. ‘I have been protecting the currency, not weakening it. Investors from the US call me and ask whether they should short the rand, and I always say no. I don’t control the currency, but if I did decide to encourage people to short the rand, it will have an impact.’ He had hoped that the ANC leadership that was elected in December 2017 would be an improvement, but he has lost faith in the party. He believes the country has already reached a point of no return, and that the proximity of David Mabuza, the deputy president, to the top job is too close for comfort.

Rupert loves South Africa, but is dismayed at what has become of the country over the last decade. He was a friend of FW de Klerk and they were in contact while he was president. He also had a close relationship with Mandela, whom he revered as a father figure. He often spoke with Mbeki. But never to Zuma, and he has had no contact with Ramaphosa since he became ANC president and head of state. There’s no inclination in the Ramaphosa government to involve Rupert in discussions about business or the economy. Or, it seems, to leverage his global network in favour of economic development. Rupert is persona non grata, it seems. ‘I’d like to have contact with Ramaphosa, but I’m not going to force myself on him.’

The Stellenbosch Mafia, published by Jonathan Ball Publishers, will be available at all good book stores from Monday, 22 July 2019. ML.

(16) The Guptas’ news channel was discontinued by DStv in August 2018.

The Stellenbosch Mafia is published by Jonathan Ball Publishers and retails for R260.