Herschel Jantjies’ on-field heroics paper over cracks off it 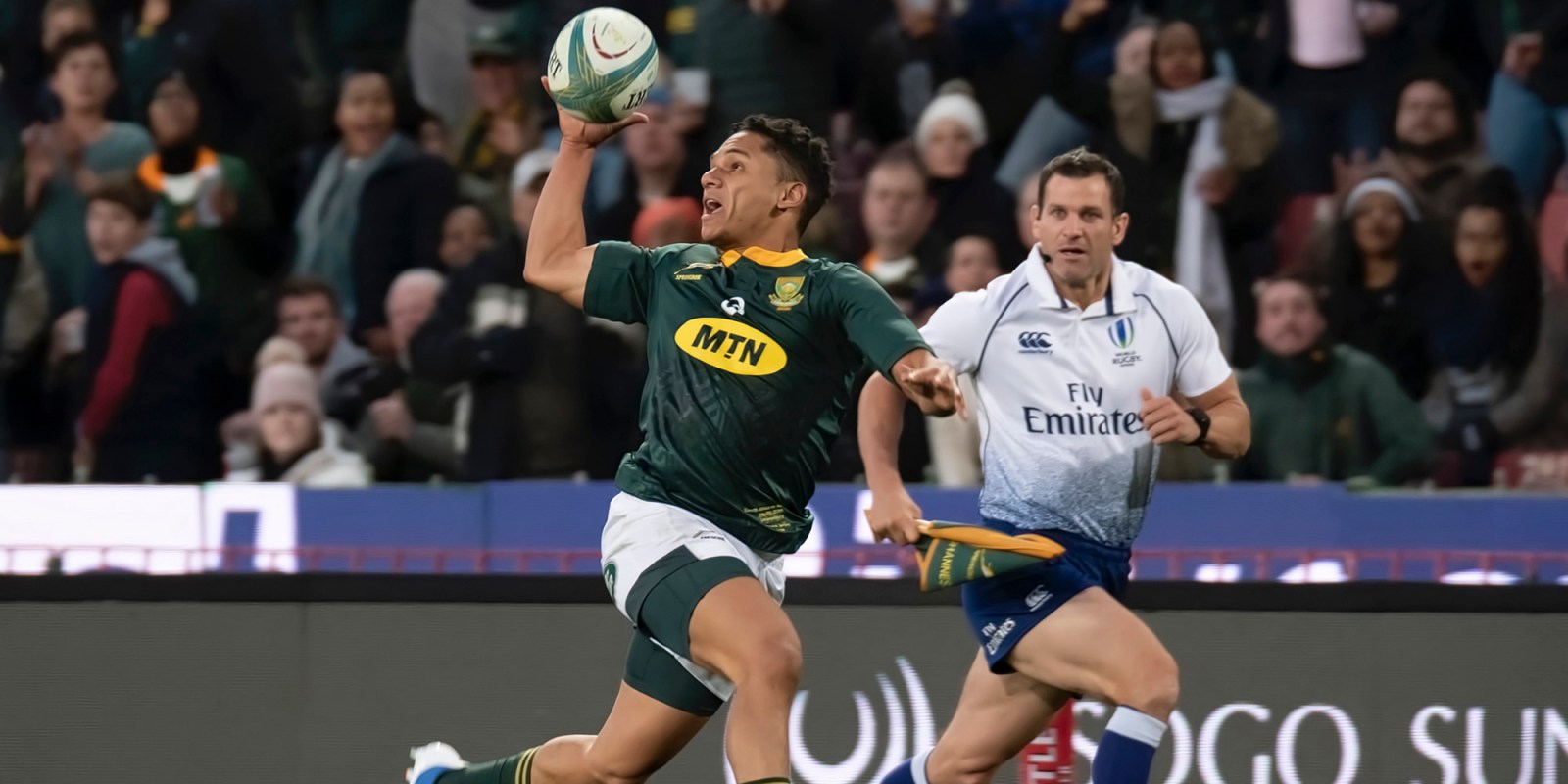 JOHANNESBURG, SOUTH AFRICA - JULY 20: Herschel Jantjies of the Springboks during the The Rugby Championship match between South Africa and Australia at Emirates Airline Park on July 20, 2019 in Johannesburg, South Africa. (Photo by Wessel Oosthuizen/Gallo Images)

Springbok scrumhalf Herschel Jantjies stole the show on Saturday, the opening day of the 2019 Rugby Championship. The debutant starred with two tries in Johannesburg as South Africa went top with a 35-17 win over Australia, holding on to first place after New Zealand’s scrappy 20-16 victory against Argentina.

Rassie Erasmus could hardly have asked for a better performance from his experimental side. The Springbok coach took a gamble when he selected a team littered with inexperienced Test players for the clash against the Wallabies at Emirates Airline Park. It paid off to perfection as the youngsters grasped the opportunity to impress with the World Cup looming.

The diminutive Jantjies, 23, shed a tear during the national anthem. If you didn’t know better, you might have said he looked overawed by the occasion. The next time he showed any sign of his youth was when he sheepishly collected his Man of the Match award after the game. In between the first whistle and the last, however, Jantjies was totally in control of proceedings. If he felt the slightest hint of nervousness, he certainly did not show it.

Tenacious in defence, he was always a step ahead of the Wallabies on attack. A perfectly-timed inside pass from S’bu Nkosi set the Stormers scrumhalf up to run in for a maiden test try in the 11th minute. Brimming with confidence, Jantjies added a second in sublime fashion just after the hour mark, going round the outside of Dane Haylett-Petty after the winger short-sightedly joined the breakdown with nobody covering the gap he vacated.

The University of the Western Cape product has long since proven his credentials at Super Rugby level. When it comes to top-quality players of colour, there are always a few nasty trolls who feel compelled to give their worthless two cents, but nobody in their right mind was in any doubt about Jantjies’ quality. Nevertheless, some social media critics feared his introduction to the Springboks starting XV had come too early. If those who held reservations haven’t yet abandoned them, they are at the very least keeping eerily quiet, perhaps taking a moment to digest their slice of humble pie.

While it was a near-perfect evening on the field for the Springboks on the field, the poor attendance should alarm South Africa’s rugby authorities. The Xerox Golden Lions tweeted that there were 51,206 fans at Emirates Airline Park for the opening Rugby Championship fixture. This was the first time in the era of the four-team tournament that attendance here for a match in this competition fell below 60,000, according to Wikipedia’s tallies.

This dip reflects a concerning trend that has long affected South African Super Rugby teams. According to New Zealand news website Stuff, South Africa collectively lost close to a quarter of its Super Rugby crowds between 2015 and 2017.

At the time of writing, tickets for the match against Argentina at Loftus Versfeld on 17 August are priced between R100-R800 on TicketPro. South Africa has endured economic adversity in recent years, and while even the powers that be in rugby need to pay bills, perhaps more could still be done to accommodate supporters who are struggling financially themselves.

Erasmus can’t be blamed for this. His main focus is matters on the field and he seems to have made all the right moves there. Players such as Herschel Jantjies, flyhalf Elton Jantjies and replacement scrumhalf Cobus Reinach have caused selection headaches. However, there is little doubt that the Springbok coach would rather have this than the sort of headache Steve Hansen probably had while watching his All Blacks limp to victory in the later kick-off.

Buenos Aires was never going to be an easy place to visit without the likes of Kieran Read and Sam Whitelock. However, the All Blacks still had enough quality to put in a far better performance than the one they actually delivered.

New Zealand made 19 handling errors and conceded 25 turnovers and 11 penalties. Having looked a shoo-in for the victory at 20-9 up at half time, Hansen’s men finished narrowly on top with no sign of the late spell of dominance that one almost expects when watching the All Blacks.

Beauden Barrett showed flashes of brilliance at flyhalf, but younger brother Jordie was underwhelming on the wing. The 22-year-old is capable of the spectacular himself, but he can’t afford to put in too many error-strewn performances if he aims to establish himself as a certain pick in a highly competitive team.

It is easy to forget that there was a time when the All Blacks were known as the best team in world rugby every year except during World Cup years. After a decade of dominance featuring back-to-back world titles, those demons have long been laid to rest. Or have they?

It is admittedly far too early to tell, but we might pick up a few clues on Saturday 27 July as the Springboks visit Wellington’s Westpac Stadium at 09:35 SAST. If 2018’s hair-raising double-header is anything to go by, we are in for a treat.

Leonard Solms is a freelance South African multi-sport journalist who has written for a number of regional, national and international newspapers and websites. He won a Rhodes-Investec Top 100 Award in 2018, the year in which he completed his Bachelor of Journalism at Rhodes University.