Springboks vs Australia: The future is green and gwijo

Springboks vs Australia: The future is green and gwijo 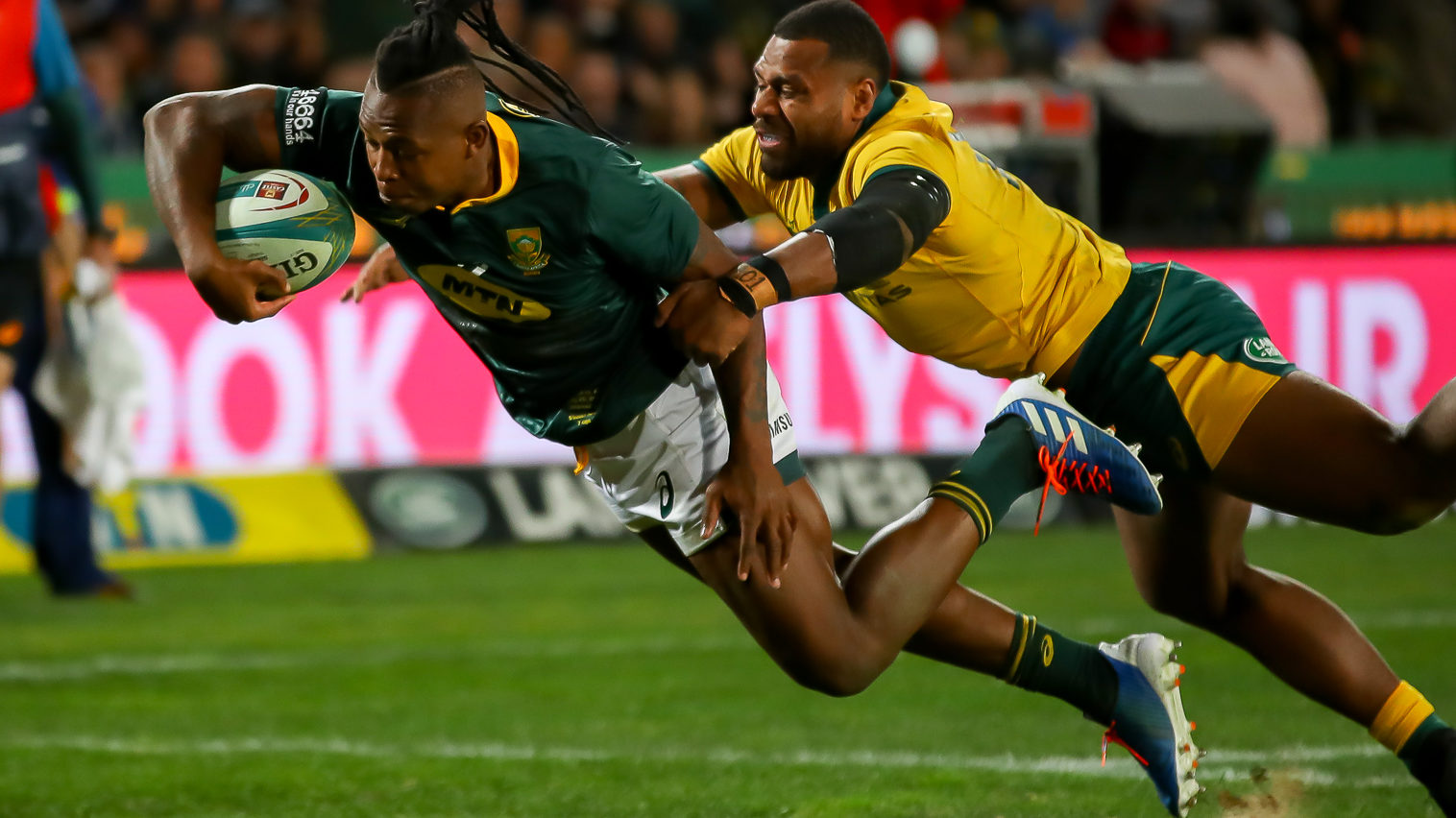 It's been there for a while, just below the surface – a Springbok side just begging to be let out to live their best life. On Saturday in Ellis Park, that best life was a dream debut and a captain carrying water bottles. The future is green and gwijo.

Those who know that wily old fox Rassie Erasmus well will tell you that he doesn’t like a fuss. He’s cut from the “it’s amazing what you can achieve when you don’t care who gets the credit” cloth. That kind of philosophy is never going to announce itself with a thunderclap, but ever since taking over, there have been glimpses of it.

But here’s the thing about favouring humility over hubris: it’ll eventually waltz over the turf in all it’s splendid, spine-tingling glory.

The Springboks were never going to lose to Australia at Ellis Park – fate just doesn’t have that kind of malice in its scripts. But their 35-17 win in the opening 2019 Rugby Championship match is almost a footnote. Because this game was never about the scoreline. It was about the balm, not just for the hurt of loss the country so keenly felt this week, but also for the cynics who thought that the sport had gone to the dogs.

It doesn’t mean the problems are fixed, even the coach himself admitted that much in his post-match interview. But it does mean that something other than the gwijo (Xhosa folk songs) is clicking.

There’s much to be gleaned from the way a team adapts to new players entering the fray. As far as debuts go, Herschel Jantjies must be pinching himself. Doing it for vertically challenged people everywhere, if it weren’t for the tears during the national anthem, you’d be hard-pressed to pick him out as the new kid on the block. But then again, that’s been true for most of the Bok debutants in recent months.

After one of Jantjies’ two tries, S’busiso Nkosi cradled his face in a congratulatory embrace, perhaps remembering that it was just over a year ago where he too was on debut – scoring two tries against England as the Boks came from behind and injected some much-needed belief.

Aphiwe Dyantyi, not available for this game but watching on, must have remembered his try-scoring debut, too. The list of players who have flourished under Erasmus’ tutelage is growing by the fixture.

There were sparks of what is possible during the brief Allister Coetzee era, but conservatism and a stubbornness to confront the challenges head-on snuffed out that flame quickly.

But as South Africans will have learned from our load shedding years, when the flame goes out, you just need to know where the lighter is.

And Erasmus and this merry team clearly keep spares.

An injured Siya Kolisi carrying water bottles when he could be wrapped up warmly somewhere pretty much sums up the philosophy that’s shaping this team.

It’s much easier to gloss over shortcomings when a side is winning, but that it’s the coach who brings them up without being probed is telling.

More importantly, engineering a convincing performance despite the faults means something special is bubbling. Even when down to 14 men, the Springboks didn’t flinch.

Teams that empower their players to express themselves with such freedom foster that great heart spirit some of us only hear about in songs.

Jantjies not only had the cool to score twice but the intelligence to boss decisions and run a tight ship from the heart of the team. Even with the number nine jersey so hotly contested now, it’s unlikely that any of these players will begrudge whoever gets it.

Better still is that the Boks seem to be doing this transformation thing without flinching – and reminding everyone that tries sound so much better in isiXhosa.

The Springboks might not be the finished product just yet – but if this is the tapdancing they’re doing in infancy – the world won’t be ready when they graduate. DM