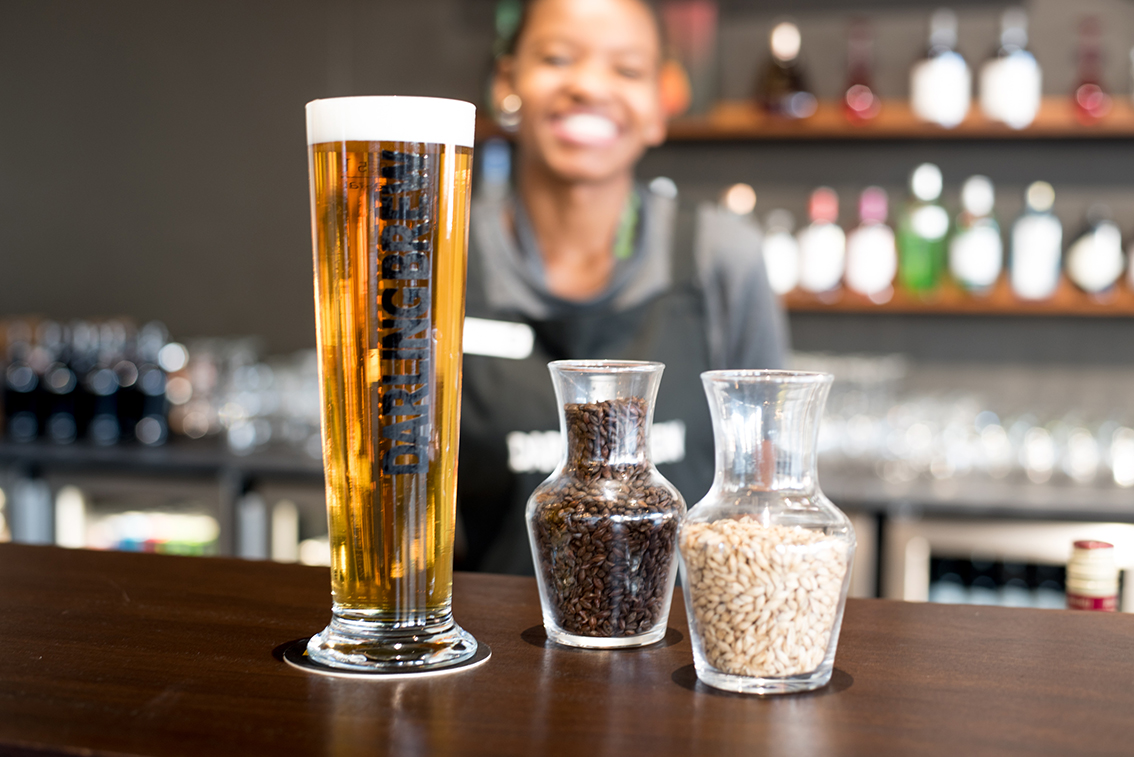 While a drive out to Darling Brew in Darling is always a fun road trip, Capetonians can now get their fix closer to home. At the beginning of March, 2019, Darling Brew Woodstock opened its doors.

The craft beer movement has brought us a whole lot of amazing brews, many of which are creatively packaged and named. It must surely be a big part of the attraction, because even though I’m no beer drinker, I’m seduced by this, every time. Which has a lot to do with how I end up with a bunch of beers at home that I don’t know what to do with.

Darling Brew – in Darling, funnily enough – came into being in 2010 when co-founders Kevin and Philippa Wood set off on an open-ended trip through Africa. Long story short, an unexpected encounter resulted in the microbrewery, and an ever-evolving and -growing range of beers.

The branding takes its cue from nature and sustainability, and the concept of “slow beer” (which came out of a red-wine-fuelled night and scribbled notes; I know the feeling well). Slow Beer is not only the name of Darling’s first brew, but the philosophy which encompasses all the beers, and the fermentation process.

While a drive out to Darling Brew in Darling is always a fun road trip, Capetonians can now get their fix closer to home. At the beginning of March, 2019, Darling Brew Woodstock opened its doors. The beers are available on tap or in bottles – some even in cans, like the new Pixie Dust, a golden Weiss inspired by the Cape honey bee – as well as plenty of well-priced wines, cocktails and spirits. The Woodstock outlet is, however, mainly a restaurant, in partnership with Verde Hotels.

“I think the unique selling point of Woodstock is that Darling Brew is known for its very wide range of beers,” says Philippa. “However, most establishments will only stock one or two of this range. Woodstock brings you a wide selection of DB which is ever-changing according to the seasons. For example, the limited edition Black Mist Orange and the hoppy Bone Crusher. People will definitely drink beers here they didn’t even know existed!” 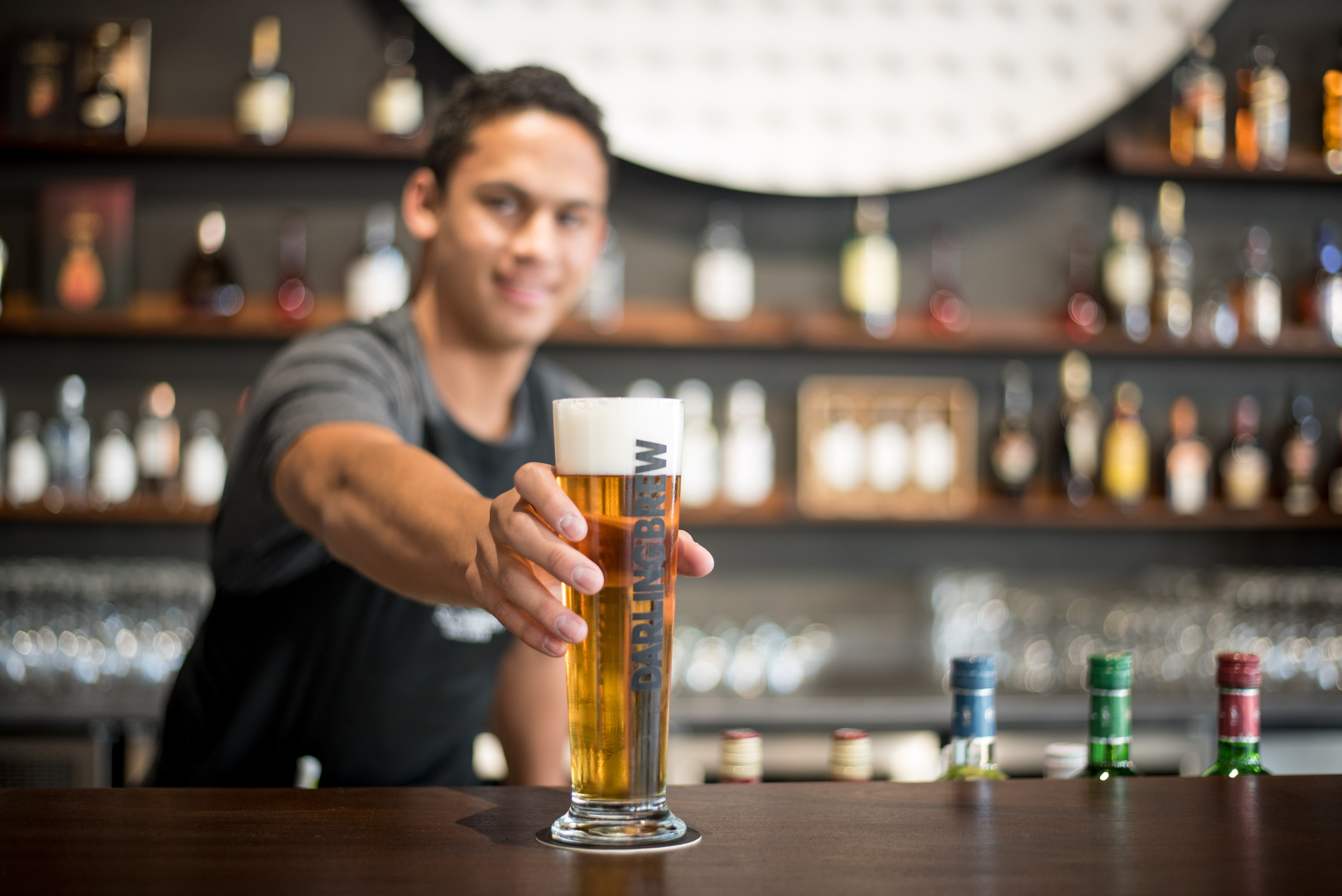 Says Verde owner Mario Delicio: “We simply felt that Darling needs an additional tasting room close to Cape Town. Since Woodstock is already home to various craft breweries, and is a trendy suburb, we felt we should be there as well. And of course we wanted to have an additional place where all the Darling beers would be available.”

Hotel Verde at Cape Town airport is, as the name suggests, a green hotel. It is energy-efficient, uses a greywater recycling system and has a zero-waste-to-landfill goal. This ethos is the perfect match for Darling Brew’s sustainability efforts which have been in place since the get-go. DB has a four-star Green Star SA Existing Building Performance V1 certification, and is the first brewery in South Africa to be certified by the Green Building Council of South Africa. In 2015, Hotel Verde achieved the highest six-star certification in the same category, the first hotel in Africa to achieve this. The GBSA “works with its membership community to champion a collective cause – to accelerate the development and adoption of best green building practices so that all buildings are designed, built and operated in an environmentally sustainable way”.

Beer and food go hand in hand at DB Woodstock. If you don’t already have a favourite, tap into the Big Daddy tasting of eight brews as an introduction. These include the original Slow Beer, Gypsy Mask native ale, Black Mist black ale, Thunder Bird IPA, Blood Serpent carbon-neutral pilsner, Rogue Pony and Pearl Rose pale ales, and Bone Crusher wit beer. Each comes with an explanatory card, but if you need human interaction to guide you, the staff are on hand to do so.

If this inspires you to try your hand at brewing, sign up for a class with 26-year-old Jan Kaserer. It costs R899 a person, which includes a three-course meal, eight-beer tasting, a 1L growler (a great big jug) of any Darling Brew beer on tap and a 5L mini-keg of your unique brew. Apparently this is a team sport, and the results take six weeks, after which you can return to claim your keg.

The menu, which is presented in a small newspaper format, is heavily loaded with delicious carb-rich meaty goodness, all of which goes so perfectly with a cold beer – sausages, naturally, as well as pretzels (the big fat bready kind, not the crispy little salt-studded things you buy in packets from the supermarket and serve to Granny with her sherry), and flammkuchen. Not to be confused with pizza, these use soft white cheese or crème fraîche instead of mozzarella.

Platters, burgers, steaks and desserts feature as well (and a salad); some even use beer or beer by-products. The Beeramisu, for example, is a twist on the Italian classic made with DB’s Silver Back dark wheat beer.

Nab a bag of beer grain crisps to eat there or take home. Available in two variants, Slow Beer and Bone Crusher, they’re made with 40% spent grain from their namesake beers. Spent grain is a by-product of the brewing operation, and is high in minerals, proteins and dietary fibre. It’s usually thrown away (or fed to livestock), so this is a way for DB to further reduce its carbon footprint.

About those sausages… there are several from which to choose, and I picked a good old fashioned Vienna. My German friend wrinkled her nose, but chef Nalene du Plessis assured us these are no ordinary Viennas.

“Our meat is sourced from a local butchery that has responsible farming ethics. They have been supplying meat for decades and have a proven track record,” she explained.

“We source our pork products – cold meats and sausages – from a family-run business which uses responsibly sourced meats and traditional German methods that ensure the final product is authentic and of high quality.”

I categorically vouch for the sossies. Served with mustard and bread, they had that lovely tight, satisfying snap when I bit into them, and didn’t mind at all that I was drinking red wine, not beer.

Darling Brew Woodstock plans to bring social offerings like live music, open mic nights and speed dating to the table. Plug points and WiFi make it a place to mix business and pleasure, and one of the hugest perks in this area is that there is undercover parking. Even so, don’t drink and drive, darling. DM