History favours the Springboks heading into the match w...

History favours the Springboks heading into the match with Wallabies 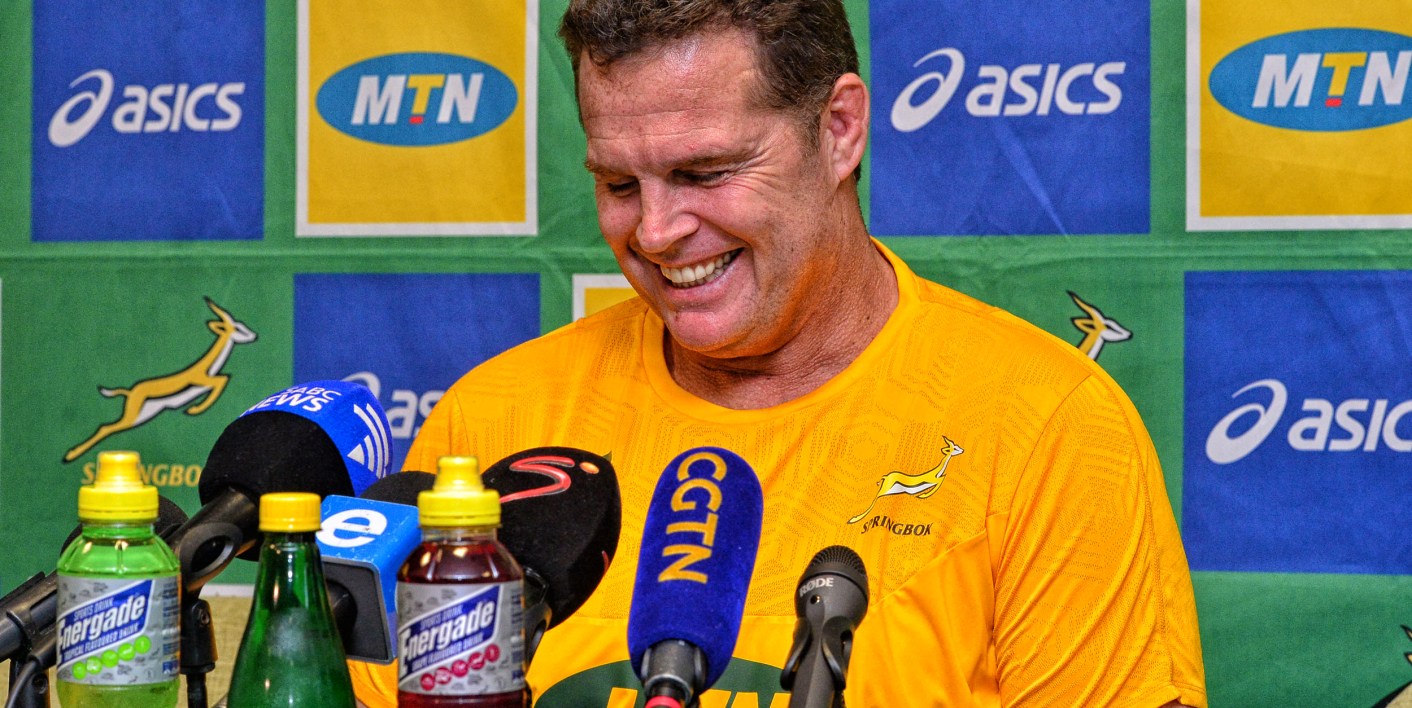 Photo: Rassie Erasmus is announced as Springbok coach during a South African rugby press conference at SuperSport Studios in Randburg

The Springboks are set to get their Rugby Championship under way when they tackle Australia in Johannesburg. With one eye already on the Rugby World Cup in Japan in two months’ time, South Africa’s coach Rassie Erasmus is looking to use the tournament to try combinations and give players an opportunity to impress.

The last time the Springboks played they edged out bitter rivals New Zealand 32-30 in this very competition in October last year. This after they’d left the sporting world’s proverbial jaw on the floor with a shock defeat of the All Blacks on their home turf. Prior to that gutsy victory in Wellington, South Africa hadn’t beaten New Zealand at home in nine years.

Fast forward to just under a year later, and the Rugby Championship is back, this time in a world cup year. And Bok head coach Rassie Erasmus has selected a new-look, experimental South African side as he tries out combinations to see what works and doesn’t work, while giving all his world cup prospects minutes to try and impress him and his technical team.

“We have planned to mix things up in the first two Tests of the season, in order to give game time to as many of the players in our wider squad, and we believe this is the right combination to face a very good and competitive Australian side” said Erasmus after announcing the team set face the Wallabies.

Some of these prospects will be internationally based Springboks who are legible to represent their country thanks to recent rule changes by the South African Rugby Union. This means players such as Marcell Coetzee (Ulster, Ireland), Cobus Reinach (Northampton Saints, England), the mercurial Frans Steyn (Montpellier, France) are back in Bok mix and will get a run-out on Saturday. Former Stormers/Western flanker Francois Louw, who now plays for Bath in England is one of only two overseas based players in the starting 15. The other is Rynhardt Elstadt who plays for Toulouse in France.

The uncapped Elstadt will be in great company at the number 6 flank alongside the experienced duo of Louw and Pieter-Steph du Toit. Herschel Jantjies of the DHL Stormers will be another debutante on Saturday. The scrumhalf who was impressive for his team in the recently concluded Super Rugby campaign will partner the experienced Elton Jantjies (flyhalf) in a new-look halfback combination. Vodacom Blue Bulls prop Lizo Gqoboka is also set to earn his first cap off the bench.

Erasmus, speaking off the uncapped trio said: “we are excited for the forthcoming year and I want to congratulate Rynhardt, Herschel and Lizo on their first inclusion in a Springbok match-day squad”.

In the absence of injured captain, Siya Kolisi, the larger than life Eben Etzebeth will lead his country against the Aussies. It’ll be twelfth time the Stormers lock leads his country out in a test.

Australia meanwhile will be looking to improve on their dreadful record at Ellis Park. In 10 tests that the two nations have played there, the Wallabies have only won one (back in 1963), with the Springboks winning the other nine. In fact, the last time the two played at that stadium, the Springboks recorded their biggest win against the Wallabies; a thumping 53-8 victory in August 2008.

Wallabies head coach Micheal Cheika is mindful of their struggles at this venue. He told the Wallabies’ official website: “We know we go into the game as heavy underdogs but most of the players have had a touch over three great weeks of training to prepare, so really they just can’t wait to get out and get into the battle.”

The most notable of those players is James Slipper. The Brumbies prop last put on a Wallabies shirt in December 2016. Slipper said he never thought he would ever don that famous gold jersey again after twice testing positive for cocaine. However, when his two-month ban ended, the Brumbies gave him a lifeline, and he did not disappoint as he helped them to the Super Rugby semi-finals. He will be looking to bring the same fighting spirit to the Wallabies camp.

His Brumbies team mate Tevita Kuridrani is back in the national team as well after missing last year through injury. Kuridrani will be partnered by Samu Kerevi in the centres, resuming their combination for the first time since November 2017, when they faced Scotland in Edinburgh.

The most notable absentee in the Australian team is of course Isreal Folau. The 30-year-old will be absent having been a near ever-present the past six seasons, starting in 31 of his country’s 33 matches in the tournament. This after the Australian Rugby Union terminated his contract over a controversial social media post a couple of months back.

However, Cheika is choosing to focus on putting all his trust in the players available to him instead of pining for the outstanding Folau.

“I’m feeling a lot belief and commitment from the people in this Wallaby squad. They’ve all invested a tonne of effort into our preparation and I know the 23 men selected to represent us all on Saturday will do us proud,” Cheika said.

The match is scheduled to commence at 5.05pm South African time. DM