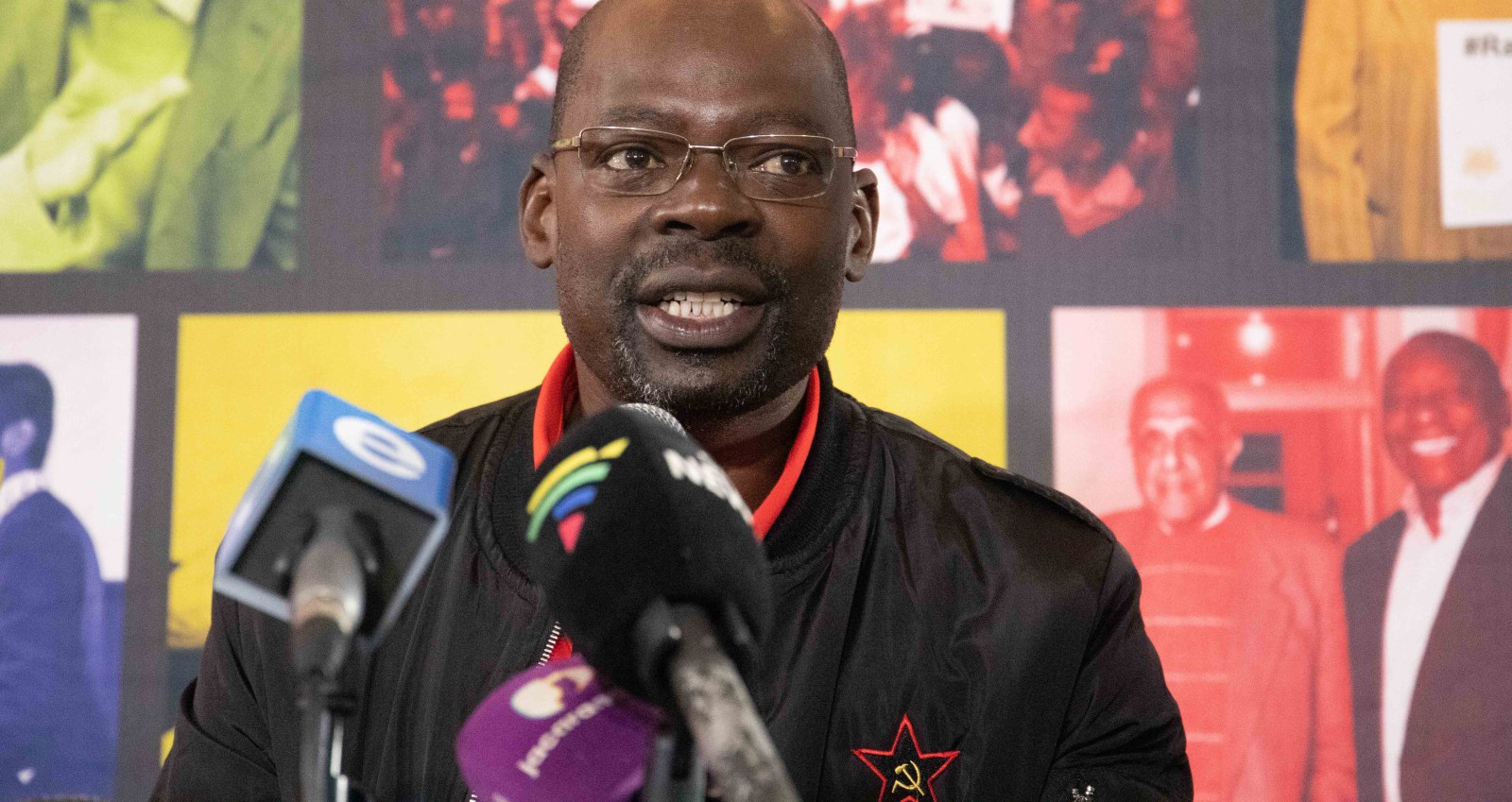 ‘We fought very hard to be where we are. We can’t be allowed to be taken back,’ said the SACP’s Solly Mapaila on Thursday. (Photo: Lelethu Tonisi)

The band’s back together. They fought State Capture and they’ve reunited against those trying to reverse their wins.

State Capture, that broad term generally known as Zuma-era corruption involving the Gupta family, was exposed by journalists and then called out by civil society. Members of the tripartite alliance and then factions of the ANC joined the chorus.

Civil society organisations rallied under the banners of the Anti-Corruption March and Save SA, particularly once the #GuptaLeaks were revealed, and tried to unite society behind a common cause. Former president Jacob Zuma was the primary villain with state reform the key aim.

Things started to change when Cyril Ramaphosa won the ANC presidency and began a reform campaign that, whether moving towards a better government or towards different benefactors, clamped down on headline corruption and was a marked change from the Zuma era.

But there was always going to be a push-back and the same civil society organisations have come together again to defend those they believe are under threat for fighting corruption. The influence they had on challenging Zuma and his cronies is still debated, but the band has decided to reunite to face their old foes.

“This I hope will be our last fight,” said Paul O’Sullivan from Forensics for Justice, and many of the high-profile criminal cases in the past decade, on Thursday.

O’Sullivan was one of the many civil society members that joined the South African Communist Party (SACP) to announce a plan to join those fighting back against the capturists.

“Today, we face a concerted fight-back against the renewal of our society by many of those implicated in State Capture. There is an attempt to subvert the processes under way to rebuild efficient and ethical governance so that they remain unaccountable,” said a statement read by SACP spokesperson Alex Mashilo at Constitution Hill, Johannesburg.

He was joined by representatives from organisations including the Ahmed Kathrada Foundation, Amnesty International, Freedom Under Law, the Helen Suzman Foundation and Johannesburg Against Injustice.

Zuma, at the State Capture Inquiry this week, questioned the purpose of efforts to investigate corruption under his administration, to put it lightly. Factions of the ANC are doing the same. The EFF, almost in tandem with Public Protector Busisiwe Mkhwebane, have made those that some see as corruption busters — read Pravin Gordhan — appear as corrupt themselves.

Anyone at the top levels of government has skeletons to hide, right?

“We fought very hard to be where we are. We can’t be allowed to be taken back,” said the SACP’s Solly Mapaila on Thursday.

The SACP and civil society coalition didn’t name who their enemies are in the current fight, but they made clear inferences — Mkhwebane and the EFF, Zuma and elements in the ANC: They’re trying to protect the corrupt, the illicit cigarette smugglers, abalone poachers, criminal syndicates. Mapaila said they’re using the money they stole to keep themselves out of jail.

“If we allow someone like PG to fall, all of us will fall one by one. Corruption will never be defeated,” he said.

The SACP and civil society coalition plan to defend those they see as the apex in the fight against State Capture by making their collective voices heard. They will hold a rally in Johannesburg on Sunday and make various petitions to government and the NPA to continue to support the State Capture Inquiry and prosecute those implicated in corruption.

The group also called on parties in Parliament to support the process of reviewing Public Protector Mkhwebane’s fitness to hold office.

EFF leader Julius Malema responded to the press conference with his own on Thursday. He continued to attack Gordhan, calling for Ramaphosa to hold him accountable for the Public Protector’s adverse finding against him.

While Malema also called on Zuma to answer questions at the State Capture Inquiry, he focused on Gordhan and claimed he should have already been reprimanded by the president.

“Bring it on, let’s go to the streets. If you want a fight, you will get it,” Malema warned the SACP and civil society groups.

An SACP civil society rally at a venue like the Johannesburg City Hall won’t deter the likes of Malema from attacking people such as Gordhan. Nor will it make a difference to the ANC faction against Ramaphosa.

The aim, however, is to increase public support for those the SACP and civil society groups believe are confronting State Capture and clear the muddied public waters of what’s true and false. DM