Reporters’ Notebook: On the streets with the Zuma-ite...

Reporters’ Notebook: On the streets with the Zuma-ites 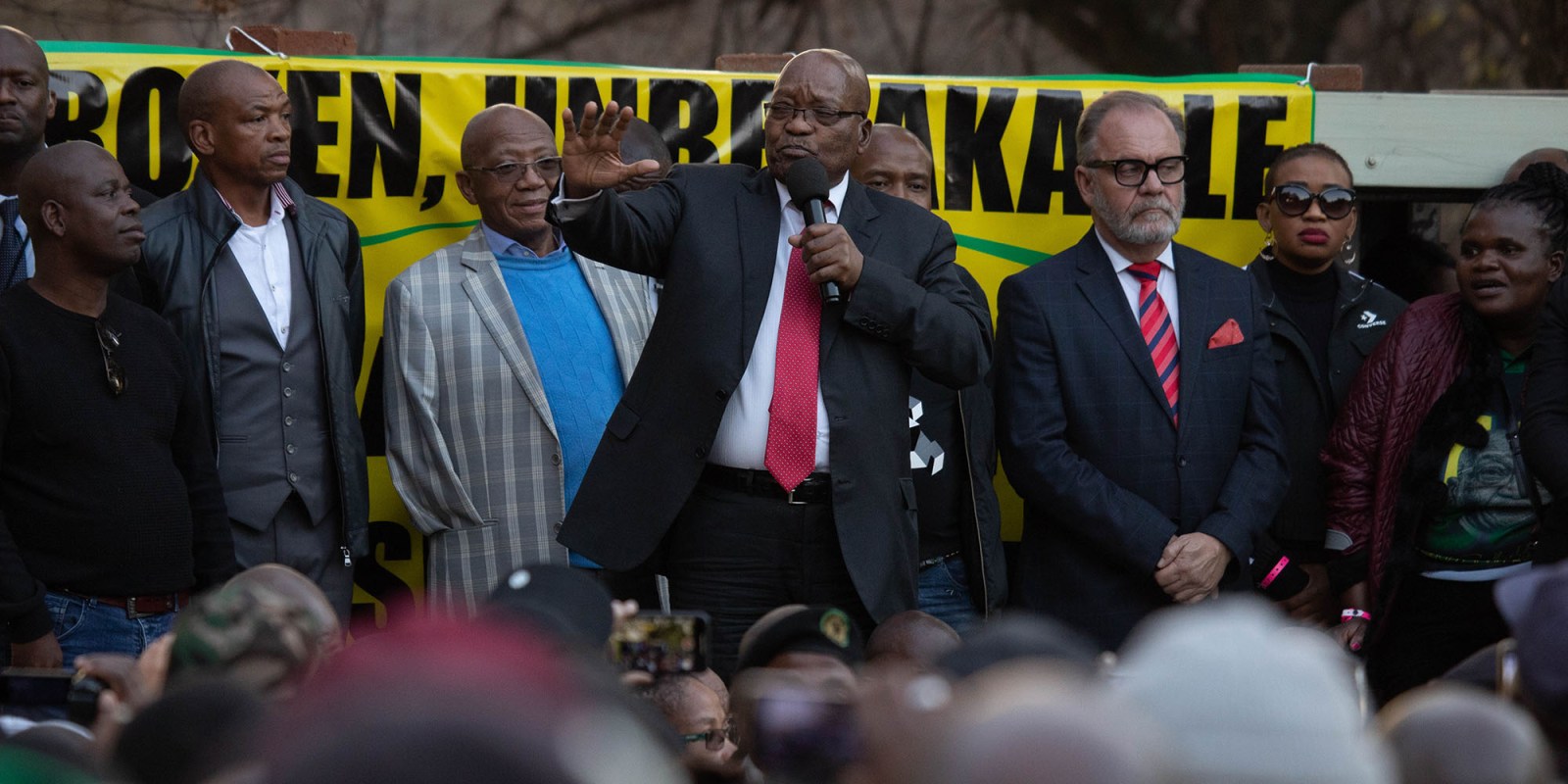 As former president Jacob Zuma took the stand at the State Capture Commission, his supporters lauded their hero on the streets.

“Let us be vigilant, the enemy is still around,” former president Jacob Zuma told supporters after his first day at the State Capture Commission on Monday 15 July.

Zuma’s supporters began to arrive at the inquiry in Johannesburg as the former president’s long-awaited testimony was about to get under way. Many had a clear definition of who the enemy, or supposed enemy, was.

On the day his political party was deregistered by the Independent Electoral Commission because of its blacks-only membership, Black First Land First (BLF) leader and Zuma ally Andile Mngxitama told media the inquiry had become a forum to attack black people. “Where’s Marcus Jooste?” he asked of the former Steinhoff boss.

“This is not about Zuma. It’s about the economy of this country, which is in the hands of white people. Everything else is a joke,” he continued.

There was a heavy police presence outside the Hillside House offices in Parktown. Mngxitama was barred from going inside to support his fave, supposedly because he was wearing party regalia.

The BLF leader argued with police and strutted for the cameras, telling the cops to let him in or arrest him. He finally made it inside later in the day.

Others arrived outside the inquiry to highlight their own issues, unrelated to Zuma’s testimony. Daily Maverick has reported how an ABI and SABMiller empowerment deal left drivers destitute and they picketed on Monday to once again share their plight.

“All we want is to be paid our money and we will move on,” said owner-driver Mandla Manyoni, who believed their court attempts were sidelined à la Bosasa.

Once Zuma finished his conspiratorial monologue inside the inquiry and finally started facing questions on whether he suggested to either the Guptas or former GCIS boss Themba Maseko that the government’s advertising spend should go to The New Age and ANN7, the real action was in the McDonald’s across the road.

“Cyril Ramaphosa!” yelled a supporter watching TV when Zuma mentioned he had a list of spies.

The restaurant erupted in supportive  laughter when Zuma appeared to struggle to answer basic questions.

Zuma’s supporters continued to claim the former president pursued “radical economic transformation” and that’s why he is being targeted.

“It can’t be that in this country people who fought for the liberation are paraded like criminals when people who oppressed us are sitting in their living rooms and celebrated like heroes,” said Bafana Mahlabe from the Radical Economic Transformation Forces group, handing over a memorandum to the commission with support from the Umkhonto we Sizwe Military Veterans Association (MKMVA).

“The commission must not be dealt with as if it’s a kangaroo court,” he continued.

The memorandum said the group was concerned the inquiry was being influenced by “white minority interests” and its scope should be expanded to investigate the beginnings of colonialism in South Africa.

Congress of South African Students (Cosas) KwaZulu-Natal Secretary Sandiso Zulu said “he is the only president who has taken education seriously; that is why we support him”.

Nancy Scheepers, a Zuma supporter who travelled from Diepsloot via a taxi organised by her ward councillor, said “what they are doing to him is not right. We want him to mention the people who are behind all of this. We support Zuma and we love him”.

As supporters waited for Zuma to address them at the end of the day across the road at Pieter Roos Park, his long-time ally, the MKMVA’s Kebby Maphatsoe, took the mic, thankfully avoiding having to hear Carl Niehaus speak.

“They are an embarrassment to the money we are spending on that commission,” he said.

Zuma was brief when he finally spoke to his supporters. He is expected to be on the stand until Friday and said he will return to make a further address.

“Our organisation is at a critical moment in its history. And not long, this moment will be unveiled. So, we should remain in our trenches to defend the ANC,” he warned.

“When I listened to the evidence that was talking about me, I didn’t think that there was anything that needs me to come and clarify. Because while in the minds of many, when this commission was established, was to find fault within me.”

“Today was the beginning. I am still on the podium answering questions and I think we should allow that process to move smoothly. Mine was to come and thank you for coming to support me.”