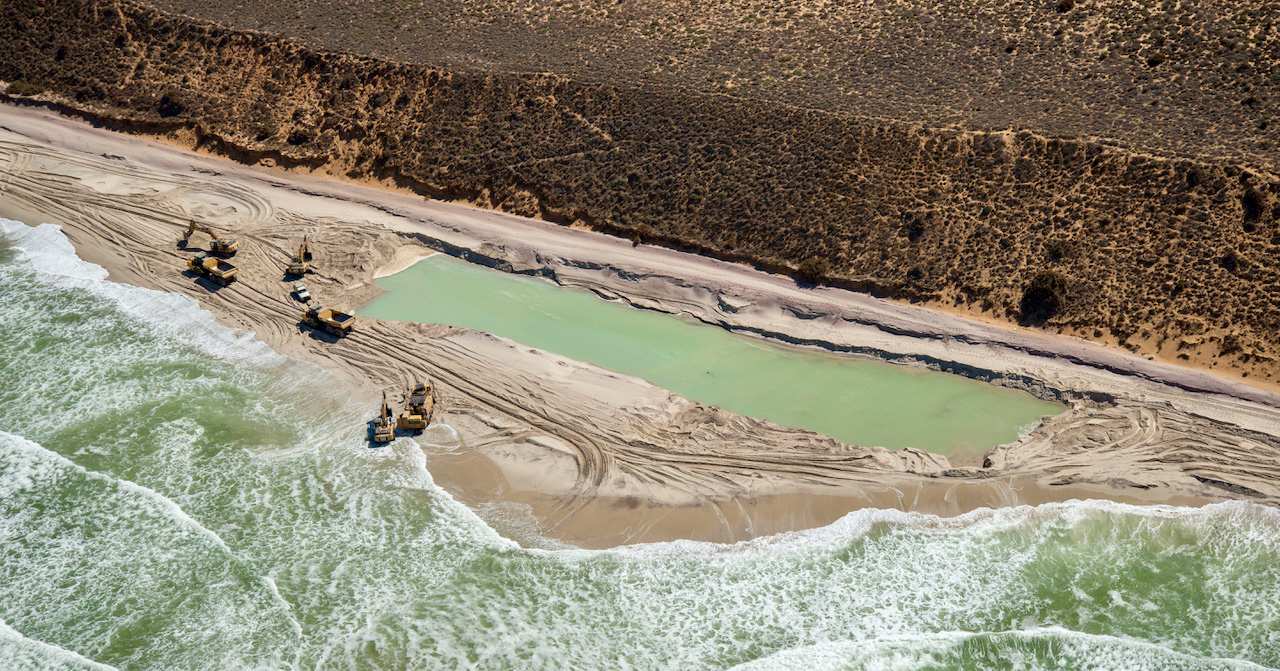 Part of the current mineral sands extraction by the Tormin mine on the West Coast. Photo: John Yeld

The government has given Australian-owned Tormin mine the go-ahead to vastly expand its current extraction of mineral sands on 10 additional West Coast beaches and on an inland strip of old beach adjoining the existing mine near Lutzville. Environmental and activist groups plan to appeal the decision.

Tormin mine has been given the go-ahead to expand its current extraction of mineral sands on 10 additional West Coast beaches.

The government has also condoned illegal activities by the mine, for which its owner Mineral Sands Resources (MSR) was fined R1.25-million, and authorised it to continue them.

Both decisions are being strongly contested and formal appeals have already been filed. One of the appellants is environmental justice group, the Centre for Environmental Rights (CER), which has filed two appeals: the first against condonation of Tormin’s illegal activities, and the second against the authorisation of the expanded mining area.

A crucial challenge raised in its appeal over Tormin’s expansion is the legality of section 102 of the Mineral and Petroleum Resources Development Act. Under the existing act, section 102 allows the state to simply expand existing exploration and/or mining rights without any further environmental, social and economic assessments being required.

However, Parliament has been trying to amend this and other sections of the Act since 2009. An amended Bill was introduced to Parliament in June 2013 but was returned by then president Jacob Zuma because of constitutionality issues relating to some parts of the proposed new legislation ­– but not to section 102, the CER’s appeal states.

“It is clear that it is the intention of the legislature to limit any extensions or variations of a mining right, to disallow amendments or variations that involved extensions of the area of the operation. Unfortunately, section 102(2) has not been brought into operation.

“The intention of the section 102 process is being misused by MSR to expedite the approval process without complying with the necessary Mining Works Programme and Social and Labour Plan requirements. It also means that the economic viability of the project has not been tested through comprehensive mine economic calculations.”

The CER argues that MSR should have followed the standard procedure by applying for a new mining right over the proposed expanded area, and that the Mineral Resources department should not have allowed it to simply apply for an extension of its existing mining rights.

The unlawful activities at Tormin were condoned by the department through a Section 24G application, named after the relevant clause in the National Environmental Management Act (NEMA).

It said the R1.25-million fine for the infringements – expansion of the processing plant area into an area of natural vegetation and the construction of a new dam to hold seawater for processing – had been paid in full.

This was despite a complaint by Mark Caruso, chairman and chief executive of MSR’s parent company, Mineral Commodities Ltd (MRC) of Australia, who wrote in the company’s 2018 annual report that it considered the fine “excessive” in respect of the “alleged minor infringements” and that the company was attempting to negotiate a lower amount with the South African authorities, although not through a formal appeal.

The department set conditions for the condonation, including required rehabilitation of the disturbed areas “incrementally and as soon as possible”, and stabilising the slopes of the new seven-metre-high dam.

The mine’s environmental consultants acknowledged that the expanded processing area and the dam occurred within a defined Critical Biodiversity Area (CBA), and that clearing work here adversely affected existing vegetation and “probably” destroyed plants of species of conservation concern and other protected species.

But the department stated in its decision document that issues raised by interested and affected parties during the Section 24G process had been “adequately addressed”, and that the impacts of Tormin’s unauthorised activities ranged from “insignificant” to “very low”.

However, this benign assessment is strongly contested by the CER in its appeal. Noting the area affected by the Section 24G decision is both a CBA and occurs within a globally recognised biodiversity hotspot, the Succulent Karoo, it argues that – crucially – the cumulative impact of expanded mining has not been properly investigated “when considered together with the existing mining activities on the site, the proposed expansion of the Tormin mine, and the recently approved prospecting application alongside the banks of the Olifants River”.

Referring to Tormin’s financial obligations around post-mining rehabilitation, the CER argues that despite “significant evidence” on the impact of the mining activities for well beyond three years after closure of the mine, there is no clarity on how MSR plans to address the long-term impact.

Another appeal comes from a newly constituted group, the North Western Cape Mining Forum, that was formed in May. Its appeal, signed by chairman Edward Mostert, says the forum is not opposed in principle to the expansion of Tormin’s operations, but further mining and prospecting approvals must be put on hold while a comprehensive reassessment is done as the basis for the transformation of the industry in the Matzikama municipal and West Coast district areas.

Environmental authorisations, mining permits and rights here have “for decades” been granted to just a handful of companies that have “dominated” the local industry, while historically disadvantaged people have been excluded, the forum’s appeal states.

It wants a moratorium on all new environmental and mining authorisations, “until all stakeholders in the mining industry in the areas urgently engage in a structured and constructive manner and agree in writing on the conditions under which mining operations will be conducted in future in the areas”. DM