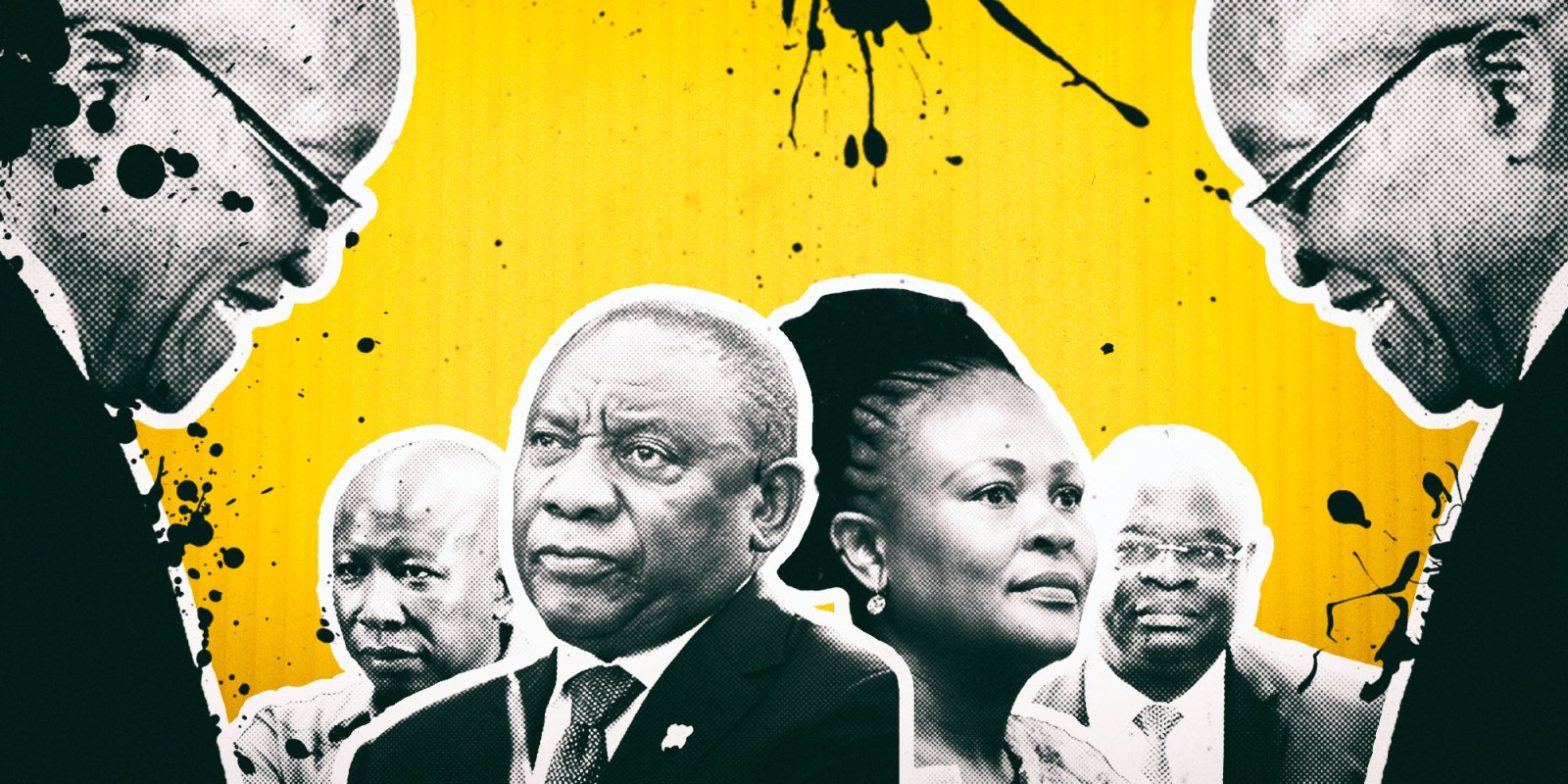 The EFF tries to physically prevent Pravin Gordhan from addressing Parliament; Tom Moyane takes to Twitter; a newspaper rehashes an old story about the SARS ‘rogue unit’. What’s going on?

Looking at the developments over the past few weeks in our politics, it would appear certain dynamics are coming close to boiling point.

While there are different groups and individuals involved through various interests, it appears there is one major faction trying to stop the rot of corruption, and another trying to stop that clean-up. (It is, of course, much more complicated than that, but we don’t have the whole day here.)

As former president Jacob Zuma appears to be preparing, for real, to start testifying at the Zondo Commission on Monday 15 July, the campaign against Public Enterprises Minister Pravin Gordhan (…and whoever else is seen as a threat, including this publication, its journalists and management – Ed) is ratcheting up. All of this ahead of what could be the climax of this fight, the Public Protector’s possible (by now very likely – Ed) findings against President Cyril Ramaphosa himself.

Zuma is due to appear at the Zondo Commission this morning. Whether he will appear and testify remains to be seen, but the fact that preparations are being made to manage the traffic disruptions that may be caused by people protesting in his defence suggest that he may well take to the stand for several days.

The fact that he is doing this is important.

At the very least, it suggests that Zuma, and those around him, feel the need to change the narrative. The story of the Zondo Commission has been about him and the people he put in place. It has all been negative. It is one of the reasons Zuma no longer looks nearly as powerful as he did a year ago; political power started ebbing from him the moment he left office.

It appears clear something is being planned. Last week, out of nowhere, former SARS commissioner Tom Moyane joined Twitter. Just like Zuma did when he first joined Twitter, Moyane tweeted a video in which he made one or two points about current events. He followed that up with a written tweet about the unit deemed to be “rogue” by Public Protector Busisiwe Mkhwebane.

The way these tweets were produced indicates it is not just Moyane and his cellphone, but rather an entire team behind this highly coordinated series of moves, including a flood of Twitter attacks on some of South Africa’s most prominent journalists.

Zuma has testified under oath before, during his rape trial in 2006. What happened then is likely to be an indication of how he will behave now.

Firstly, it is likely he will make a request to speak in Zulu through an interpreter. This will have the political impact of making a point about race in our society, and the practical implication of giving him more time to prepare his answers. But it is his right to do so, should he so choose.

His performance in 2006 was impressive, and any lawyer questioning him may find it difficult to pin him down. Unless there are documents signed by him, it might be difficult to directly implicate him in anything. Zuma is likely to simply stick to his lines: the Guptas are merely “friends”, he did nothing wrong, his decision to fire then finance minister Nhlanhla Nene was merely a political one, there was nothing wrong with his proposed nuclear deal, etc.

Certainly, it will control the country’s attention.

At the same time, the movement against Gordhan is gaining pace. The Public Protector is clearly moving against him. Her office has repeatedly denied that there is any political motive in her probes into him, and the unit he allowed to be set up when he was the SARS commissioner. But reports in the Sunday Times on Sunday appeared to show she relied on evidence from someone who did not play the role she claimed in her report.

This is likely to be used by Gordhan as part of his legal review of her findings.

Mkhwebane’s findings were used by the EFF to justify its attempt to stop Gordhan from speaking in Parliament on the evening of Thursday 11 July. This was unprecedented. Members of one political party attempted to use physical force to stop a member of another party from speaking. (That type of behaviour has rarely been seen since Germany, circa 1920s – Ed)

The EFF’s statement that it was doing this to protect the Constitution seems impossible to justify. How can a party with only 10% of the vote claim it has the right to stop someone from speaking in Parliament? How can it break the rules of Parliament in this way? Who gave it the right to decide who can speak and who cannot? And why is Gordhan not allowed to speak (because of a finding by the Public Protector) while Transport Minister Fikile Mbalula is allowed to (despite a similar finding by the Public Protector)?

This smacks of desperation.

Despite his best efforts, it appears that EFF leader Julius Malema (who got into trouble with SARS while Gordhan was in his first term as finance minister) has not been able to move public opinion against Gordhan. This means that he may have run out of options, and Thursday’s attempt to use physical violence to stop someone from speaking was an expression of that.

All this may be setting the stage for what is likely to come next, the investigation by Mkhwebane into the Bosasa loan or donation to Ramaphosa’s ANC leadership campaign in 2017, which could be the climax of these particular dynamics.

If Mkhwebane is playing a political role, it is likely she will make a finding against Ramaphosa. This would allow his critics and his enemies (who can be different people) to claim there is no “new dawn”. It could change the story in dramatic fashion, and take the heat off those who appear to be on the back foot.

However, it is also true that these are what many call “tribal times”. An example of this is how people in the US either support President Donald Trump or oppose him, and the facts of the issue no longer matter. The same dynamic is happening in the UK over Brexit.

In our case, groups of people support either Zuma or Ramaphosa, no matter what facts come to light.

This is expressed in our media in interesting ways. The Sunday Times had a front-page story about the weaknesses in Mkhwebane’s findings, an editorial criticising her, a column demanding her removal and a piece by Gordhan himself.

The previous weekend, the Sunday Independent had a poster claiming “Gordhan on the ropes” while publishing pieces by Piet Rampedi and Mzilikazi wa Afrika. They both published the original “rogue unit” in Sunday Times, that was first found by the Press Ombudsman to be untrue, and was then retracted by the paper.

This battle has been going on for some years; the attempts to change the minds of the public on this issue, and in favour of different factions go back some time. Now it seems that the balance of power is about to be properly tested. The problem for Zuma, Mkhwebane, Moyane, and Malema is surely that many people see them as corrupt. The claims against Zuma, his many scandals, the Guptas relationship and his obvious lies when trying to explain his decision to sack Nene, for example, and his personal conduct have surely cemented views of him (towards the end of his presidency his approval rating dropped to 20%).

In the case of Moyane, the findings of the Nugent Commission, and the testimony from Bain and Company about how the damage to SARS was premeditated surely makes it impossible for him to change this public perception.

And in the case of Malema, only 10% of voters cast their ballot for him.

All of this can be compared to evidence that Ramaphosa was key to the ANC’s victory in the May elections.

This suggests that the political “tribes” have spoken. And that it will be very difficult to change their view.

The next question is how long can our politics, and the country, last at this temperature? DM