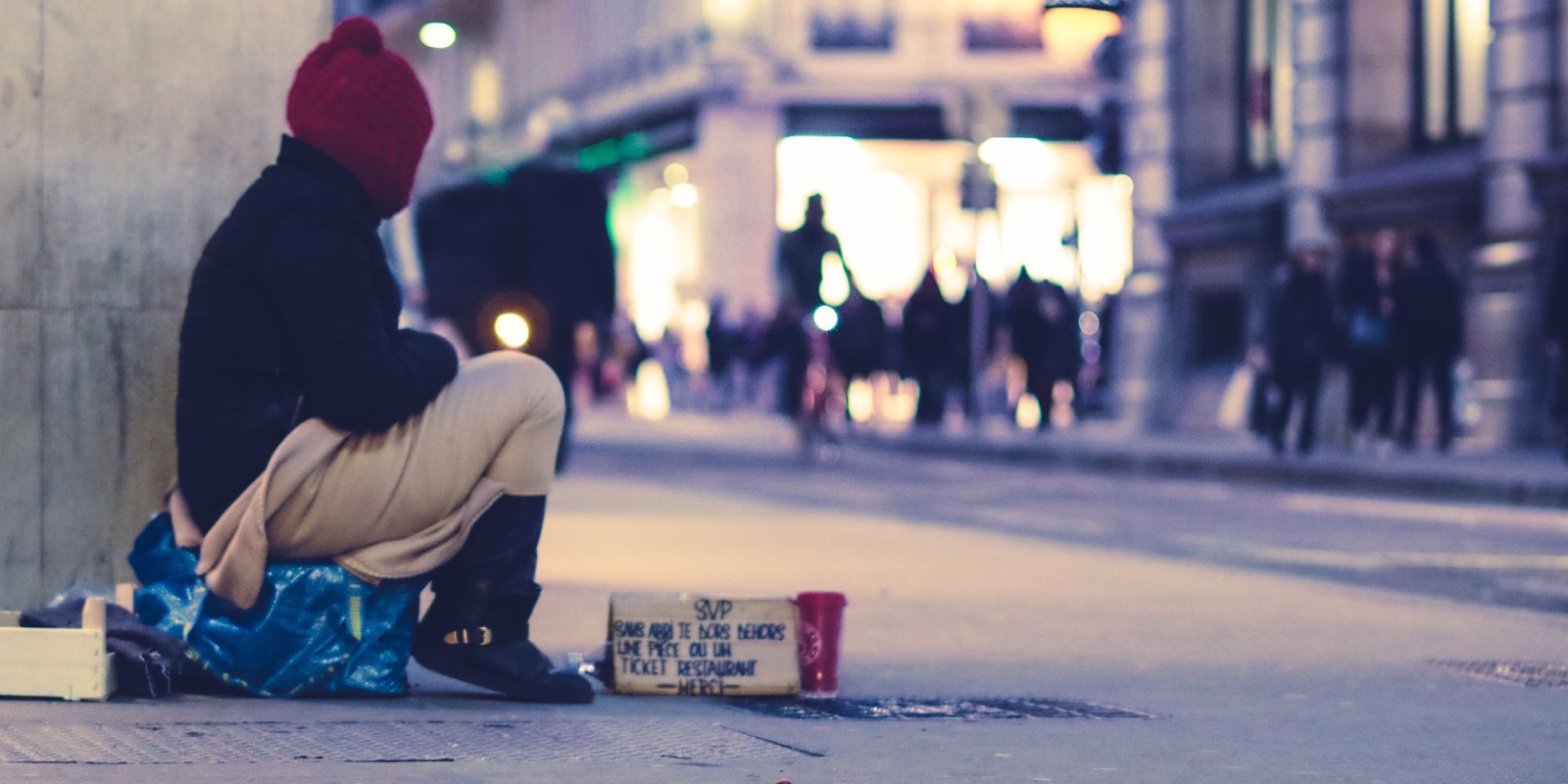 The decision to issue fines under the current City of Cape Town by-law to the most vulnerable and poorest citizens was a betrayal of the essence and values of our Constitution, say the writers. (Photo: Ev/Unsplash)

Making the homeless community invisible to society is not the appropriate way to deal with the challenges they face. This action has the potential to drive them underground and increase their vulnerability and stereotyping.

An urgent discussion initiated and hosted by the Community Chest took place at its offices in Cape Town on 8 July 2019 to consider the recent reports of fines being issued to homeless persons living on the streets of Cape Town.

The meeting was attended by 16 organisations and their representatives.

The event was held in the wake of media reports of 199 fines being issued to homeless people by local law enforcement. It was arranged as an initial fact-gathering discussion to establish whether shelter organisations had any experiences and/or knowledge of the reported fines. It also sought to hear accounts of the magnitude and impact of fines imposed on homeless persons in Cape Town.

The group expressed concern that the decision to issue fines under the current by-law to the most vulnerable and poorest citizens was a betrayal of the essence and values of our Constitution and would, in effect, be giving more power to very powerful forces over increasingly vulnerable people.

The continued referencing of homeless persons in relation to “nuisance by-laws” and the use of such by-laws to police their actions have the compounded effect of creating deep stereotypes of homeless people.

At its most basic level, it denies homeless persons the rights and dignity conferred upon them by the Constitution. It implicitly allows for homeless persons, in both the social psychology and the practice, to be seen as unwanted nuisances and drives up reporting of their presence within communities. And without necessary safety nets and services in place from government departments and social agencies, who transversally address human vulnerability, it allows for the homeless to be primarily engaged by law-enforcement agencies and the legal system.

The legal process of issuing a fine will of legal necessity end up in warrants of arrests with the very real potential of non-compliance or failure to pay the imposed fines ending up in prison sentences. In fact, it amounts to fining poor people for being poor.

It also further exacerbates the divisions within the City and its people by deepening the prevailing “us vs them” attitude and it entrenches the economic and spatial divides that have earned us a global reputation as being the most unequal society in the world.

While it is recognised that some diversion programmes from the street into more secure accommodation are in place, not all homeless persons make use of them and they are also not sufficient for some people, especially families. This too must be understood within the context of not developing “one size fits all” solutions to the very complex issues of what leads to homelessness and what entrenches a life on the streets.

The failure by authorities to understand the devastating impact of poverty, the loss of income through illness and unemployment, the breakdown of relationships, the loss of children and loved ones, the loss or destruction of familiar habitation and the stress, fear and insecurities that such vulnerability brings into the human psychology, as well as the pain and trauma of past and ongoing injustices all aggravate the life of a homeless person. To further “persecute” such vulnerabilities with punitive policies is tantamount to torture.

The meeting noted that one of the organisations, after the breaking of the story of the fines and prosecution of homeless persons, could not find any street people in the areas where they normally provide services. They were told the homeless people had gone into hiding because they feared being fined.

The meeting also recognised that the problem is not just a City of Cape Town issue, but that national government has to play its part in its legislation, policy framework and budgeting obligations towards its citizens, which includes homeless persons.

The meeting called for a national collaboration by agencies working with homeless persons as well as the homeless community itself, to begin mapping strategies, policies and solutions that will more appropriately address the challenges faced by homeless and displaced persons.

While these stakeholders will each have their own course of action over the next few weeks, the dialogue agreed that there is an urgent need to investigate the by-laws which regulate the fining of homeless persons and their alignment to the Constitution. Every organisation present agreed it is wrong to have a process in place that directly or indirectly has the effect of criminalising homelessness and threatening homeless persons’ futures forever.

The meeting accepted and made it abundantly clear that while these issues are complex and global, it should not deter us from being and acting as a humane, just, inclusive and caring society that shows deep commitment to address and respond to the call of our Constitution to build a prosperous and inclusive democracy for all our citizens.

This commitment is the hard work of building a new South African society. Anything else will potentially deepen the fractures of our intended unity and prosperity and entrench our reputation as the most unequal society in the world. All stakeholders from across society must help support, encourage and facilitate the building of a safe and prosperous South Africa.

The meeting concluded that, with the help of pro bono legal services, it will start the process of looking at the legality of these fines. By focusing attention on the legal aspects, it is hoped authorities will be prevented from criminalising something the Constitution does not entitle it to criminalise.

The issues raised will be taken up by the agencies present within their own organisations as well as by local and national Street Peoples’ Forums. DM

The meeting was also attended by the following individuals in their private capacities: Vernon Motseme and Suzette Little.