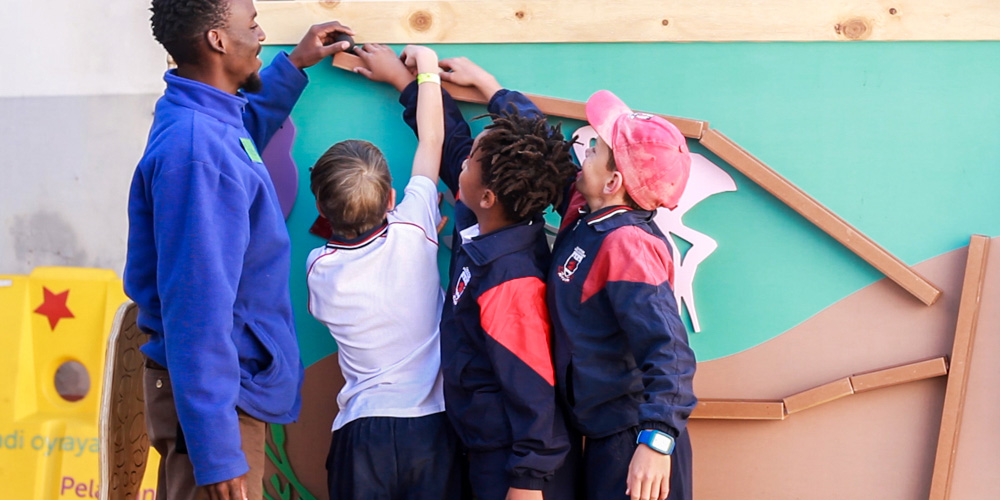 Play Africa, a children’s centre at Constitution Hill in Johannesburg for play learning, aims to make play an integral part of early learning and healthy development to spark imagination and enhance problem-solving capacities.

Cheryl-Lyn Selman, acting CEO of Play Africa, says the Children’s Museum at Constitution Hill endeavours “to foster a culture of play and make them (children exhibits) accessible to children in Johannesburg”.

The interactive exhibits, which comprise of a range of play equipment such as the Children’s Court, Fantasy Corner, Farm to Market, Reading Corner, Water Table, Rigamajig and others, facilitate self-directed play to “support children’s cognitive, emotional, social and physical development”.

With more than a million children in the City of Johannesburg, Selman says Play Africa provides a solution for children who do not have access to a place to play in a safe environment.

Before the fixed location at Constitution Hill began in 2018, Play Africa would host pop-ups at schools and malls.

Selman said the intention of the fixed location was for kids to have “quality play” by introducing them “to the exhibits and allow them to decide for themselves which one to use”.

Some children spend 15 minutes on an exhibit then move on to the next, while others spend the entire two or three hours at the Children’s Museum on one exhibit.

And instead of putting kids in front of the TV, parents can bring them to Constitution Hill to play and learn at the same time, said Selman.

Play Africa’s philosophy is based on Reggio Emilia’s Play Pedagogy where learning through play is aimed at unlocking a child’s creativity.

Mpho Tsele, a play and learning supervisor, said “a lot of children come from underprivileged backgrounds”, live in flats and “go to schools in flats”.

Selman says that Play Africa is not a day-care centre, but a place where the parent or teaching assistant is always present to “encourage meaningful interaction with caregivers”.

“It quiets all the distractions and facilitates connection,” said Selman.

However, “the important thing is the time parents get to spend with the child”, says Tsele.

“You get out as much as you want,” said Selman.

And rather than parents fixing or doing things for the child, Tsele says Play Africa allows children to lead the play.

Tsele recalls how often when she gets home she has to pretend that her living room is a volcanic mountain for her child, who insists that she must move over it.

“I realised that modelling and pretending that there is lava on the floor through imagination thinking can encourage critical thinking,” said Tsele.

Futhi Mbongwe, programme manager for Play Africa, says the Children’s’ Court where children model a court case and debate, helps them focus on children’s rights, the constitution and equality.

Children also learn about peaceful demonstration and hold mock elections — from registering to vote, inking the thumb and casting the ballot.

Mbongwe says this allows children to have a dialogue about whether they know their rights and shows them that protests in South Africa can have a positive effect if done properly.

Another exhibit that Mbongwe says is “activated” a lot by the children is the Fantasy Corner. Here, they dress up and play different grown-up characters.

Mbongwe says the children turn the space into a house with a traditional family. They often turn it into a hospital with doctors and patients.

Another interactive exhibit is the farm to market, where children learn the process of farming and taking fruit and vegetables to the market.

According to Mbongwe, this helps children “understand the food chain” and learn how to work as a group by ensuring the vegetables are harvested and sold at the store.

“The objective is not for the kids to just play, but for personal growth. Learning as much as they can, to be prepared for work and for the world,” said Steven Asei-D’antoni, a professor of applied sciences who was visiting from Hague University.

Asei-D’antoni visited Play Africa to learn more about “the initiatives around play learning in South Africa”.

He said: “In a world where things are faster, play learning teaches more desire to connect and have empathy”.

Furthermore, he believes learning should not be painful, but rather organic. For their first three years, children learn through playing. A methodology, he says, schools neglect.

“It is a natural way of learning and school goes against nature,” said Ase-D’antoni.

He said creativity drops in the classroom and educators need to be trained not to focus on ticking off objects in the curriculum, but rather how children learn.

Selman says Play Africa plans to build a “world-class green building on par with the rest of the world” which will cost R120 million and host more children with bigger exhibits.

Furthermore, Play Africa intends to educate teachers and parents about the significance of incorporating play in classrooms as a means of meaningful learning. DM