Reform of Libya’s security sector must not fail again

Reform of Libya’s security sector must not fail again 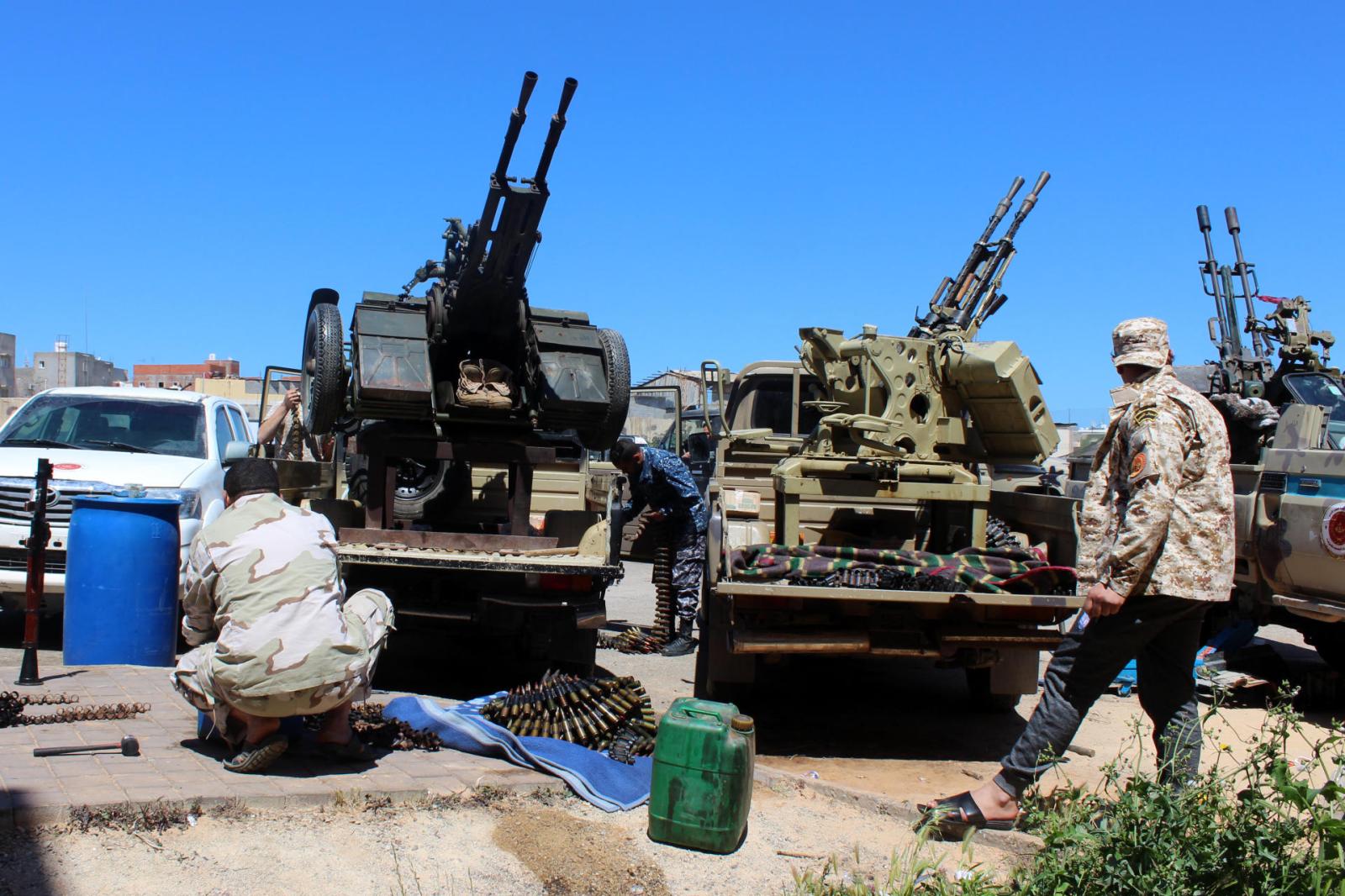 Militants, reportedly from the Misrata militia, stand on gun-mounted vehicles as they prepare to move to the frontline to join forces loyal to the UN-backed unity government, in Tripoli, Libya, 09 April 2019. Commander of the Libyan National Army (LNA) Khalifa Haftar on 04 April ordered Libyan forces loyal to him to take the capital Tripoli, held by a UN-backed unity government, sparking fears of further escalation in the country. The UN said thousands had fled the fighting in Tripoli, while ministry of health reported 25 people, including civilians, were killed in the fighting. EPA-EFE/STRINGER

Regardless of who wins the fight for Tripoli, the power of armed groups over government is being entrenched. By Matt Herbert

Successive Libyan governments and the international community have worked for eight years to stabilise and reform the country’s security sector. But all this has been halted by the outbreak of war between the internationally recognised Government of National Accord and Khalifa Haftar’s Libyan National Army.

The formality of the titles accorded to each side obscures that the fighting and the dying is being done largely by armed groups affiliated with either side. The outsized role played by these groups is not a quirk of this conflict, but rather the central weakness of the Libyan situation.

There is little surety about how the battle in Libya will be resolved. But three things are clear: the conflict has significantly altered the situation in the country; there is no possibility of returning to the old status quo; and an effective security sector reform process is more necessary than ever.

When the current fighting around Tripoli stops, Libyan and donor efforts to stabilise and reform the security forces will begin again. Rather than doubling down on approaches taken before the 4 April conflict, those involved should pause to understand what has changed, how programmes should be altered, and how Libya’s security sector broadly can be improved.

Libya’s security forces collapsed during the country’s 2011 revolution, though they had been neglected and began hollowing out long before. During the uprising, control of security passed from the government to a variety of armed groups quasi-affiliated with state security structures or operating outside formal control.

For eight years, successive Libyan governments have attempted to claw power back from the groups. New security force units have been built and trained, and steps taken to incorporate armed groups into the security architecture.

The United Nations, European Union and donor nations have supported security sector reform process, dedicating large sums of aid and contributing considerable human capital. But neither Libyan efforts nor those of donors have achieved any significant success in rebuilding an effective security sector.

Overall it remains weak and fragmented, with power and capacity remaining largely in the hands of armed groups. Even groups loosely affiliated with the state are largely unintegrated into the formal chain of command and are unaccountable for their actions. This leaves armed groups involved in a range of missions that should be the job of statutory forces, from protecting government buildings in Tripoli to defending the capital against Haftar’s alliance of armed groups.

Regardless of which side triumphs in the fight for Tripoli, the conflict has further entrenched the power of armed groups over the government. This heightens the risk of further violence and conflict. If the government is to gain this power back, an effective security sector is needed more than ever.

And so, when the current conflict ends, Libyan and international planners must ask what happens next regarding security sector stabilisation. Most important is the need for in-depth understanding of how the conflict has affected the security sector overall. This isn’t just a matter of facilities and equipment damaged or destroyed.

Rather, the focus should be on networks and perceptions. What power dynamics have shifted between armed groups affiliated with both sides? How have Libyans’ attitudes on security force matters been altered by the conflict, and what are their immediate security needs?

All programming on security sector stabilisation and reform should be reviewed in light of this changed context. Implementers and donors could be tempted to simply reinforce old strategies, betting that better programme management or more funding would achieve success out of failure.

Such thinking could be dangerously wrong. Approaches designed before Haftar’s move on Tripoli would probably be ill-suited or counter-productive in the changed post-conflict context. To avoid this risk, assumptions need to be questioned and programmes adapted.

Even before the conflict, reviewing and revising the myriad security sector reform programmes in Libya was overdue. Coordination among international actors has been uneven, with some donors seemingly more focused on achieving domestic political goals, mainly around migration, than on Libyan security needs. Some important actors, notably the African Union, have played only a limited role in the process.

In search of short-term operational success, some donors have focused resources on military units for civilian law enforcement missions, risking long-term dysfunction in civil-military relations. Clientelism between international donors and specific security units has led significant resources to be lavished on units that offer little immediate value to Libyan citizens.

By building consensus on these and other bedrock issues, Libyan officials and international partners can better begin to plan for how to restart the reform process in the wake of the conflict. The groundwork should be laid now for a more effective strategy than what the country has seen to date. This means asking the right questions and checking fundamental assumptions.

Such an approach will not be simple nor yield the sort of immediate and visible results that donors often demand. But it is necessary to ensure that Libya’s security sector is tailored to the needs of Libyans and can operate effectively in the post-conflict environment. DM