Philippi mother: ‘I could hear the gunshots from chur...

Philippi mother: ‘I could hear the gunshots from church’ 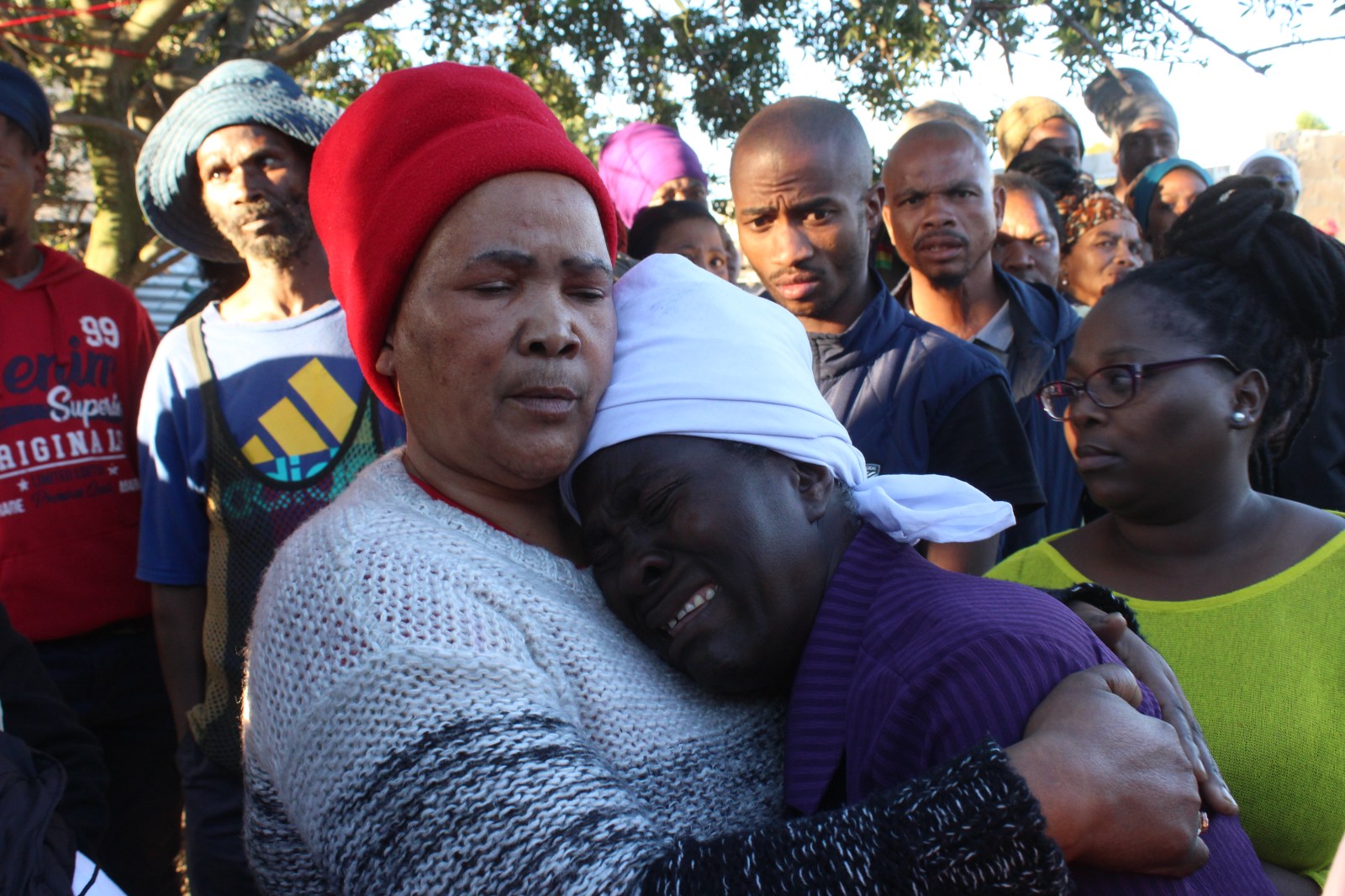 Ernes Anderson (white head scarf) is consoled by a neighbour outside their home on Wednesday. Her daughter, Siya, and five of her friends were shot dead last Friday night in Marcus Garvey, Philippi. Photo: Velani Ludidi

Police Minister Bheki Cele has visited the home where six women were shot dead last Friday night. Five other men were also gunned down in two separate incidents over the same weekend in the area. Velani Ludidi for GROUNDUP

The last time Ernes Anderson saw her daughter was last Friday night to attend a church service near their home in Marcus Garvey, Philippi. A short while later, her daughter Siya, 20, and five other friends were shot dead in their yard in what appears to have been a targeted hit.

Her friends were Zoleka Bulana, 27, Queen Bulana, 26, Nomathandazo Nomgcana, 18, Gcobisa and Lelethu [some surnames and ages are unknown to GroundUp]. The motive for the murder is unknown.

“I could hear the gunshots from church but nobody paid attention until a young boy was sent for me,” said Anderson.

“I arrived before the police and saw my daughter lying with her friend in a pool of blood … I cried while they were covering her with a blanket,” she said.

The women’s murders were the first in a spate of deadly shootings in the area over the weekend. On Saturday, the Zwelibi family of Lower Crossroads lost three of their children aged 17 to 25. They were shot while at a friend’s house. Two other men were also killed at the KwaThandi Tavern that same night.

Police Minister Bheki Cele visited the Philippi East community on Monday where residents demanded that he deploy more police in their area.

On Wednesday afternoon, Cele returned to the area to visit the home where Siya and her friends were murdered. But as Cele and his security entourage entered the home, murdered Zoleka Bulana’s four-year-old daughter became unnerved, crying hysterically. Her aunt, Khuthala Bulana, explained that the toddler had witnessed the shooting and was very traumatised. She said the child has not received any counselling.

“These are good people here to help. You are safe,” said Bulana to reassure her niece, but the toddler held onto her, staring at the strangers in her home.

Cele told the families that he could not reveal the details of the investigation but promised that arrests would be made.

“Looking at this home it was clear that the shooters knew their targets,” he said.

The families pleaded with Cele to assist with getting the women’s bodies released from the state mortuary so they could be buried. Anderson, from Zimbabwe, said that she was undocumented and fears that her daughter’s body will not be released because of this.

Bulana said there were many unanswered questions around her sister’s death.

“The pain is unbearable, and we are left with this child [to whom] we will have to explain why her mother is never coming back,” she said.

Cele then asked the media to leave while he spoke to the families privately.

Outside, community leader Thembisile Mbenene said that crime in the area would only be resolved when government departments like Human Settlements, Social Development and the police work together.

“The minister of police comes here alone … Look at how many children are not at school. Look at the unemployment here and the way people are living here,” he said. DM