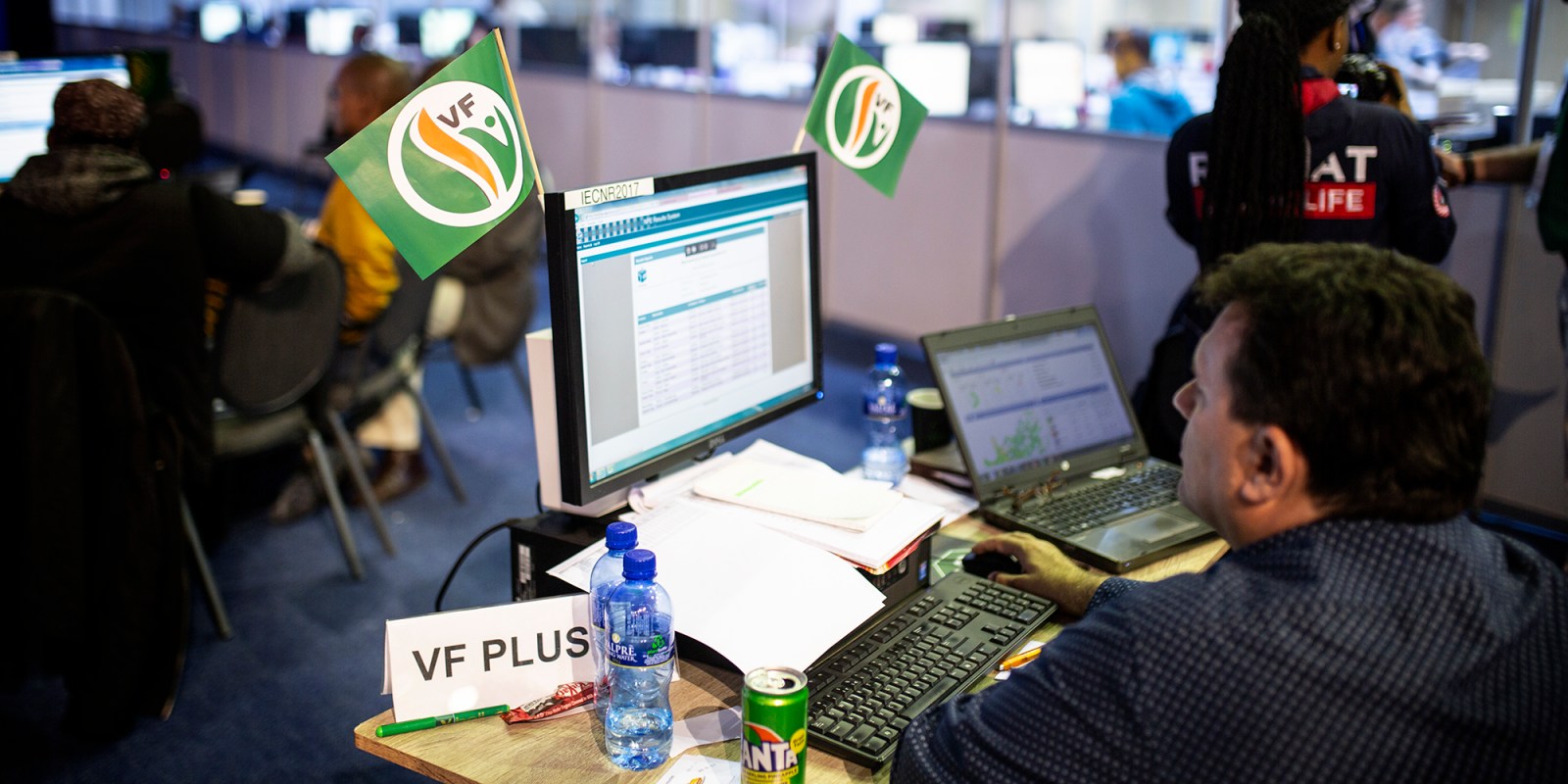 The Freedom Front Plus (FF+) desk at the IEC's National Results Operations Centre (ROC) in Pretoria, 9 May 2019. Photo: Leila Dougan

The DA’s month of many by-elections could not have started off on a worse note than what transpired in the town of Stilfontein on Wednesday night. The ANC retained Embalenhle and Jeppe’s Reef.

The Freedom Front + (FF+) shocked the Democratic Alliance (DA) in Stilfontein in the Matlosana municipality in North West on Wednesday night by comfortably taking a ward off them, in what was a safe DA ward in 2016. The African National Congress (ANC) defended two wards in Mpumalanga on Wednesday night. The Economic Freedom Fighters (EFF) gave the ANC a fright in one of the wards by making large inroads in the ward around Embalenhle, next to Secunda.

Political parties would have started July by looking at the next few rounds of upcoming by-elections. They would have noticed that there were over 35 by-elections coming up in the space of a month, and that of the 12 marginal wards being contested, the DA would be defending nine of those, with the by-election in Matlosana being the first of those nine marginal wards.

FF+ leader Pieter Groenewald cut his political teeth here when he was elected mayor of Stilfontein in the late Eighties. He still has deep ties to the town, and those ties will grow much stronger after the result here on Wednesday night gave the FF+ a win, and also their only elected ward councillor in South Africa.

Stilfontein is part of the Matlosana municipality. Matlosana’s principal town is Klerksdorp. It also includes Orkney and Hartbeesfontein. Stilfontein has a strong attachment to the surrounding mines.

The DA beat the FF+ by over 1,000 votes here in 2016. What is important to note is that the FF+ finished well ahead of the ANC in 2016 to come second. The FF+ tends to do better when voters in a ward know that by voting for the FF+ instead of the DA, they will not hand the ward to the ANC. This was clear when the FF+ surged in two Mogale City by-elections in suburbs of Krugersdorp just before the national and provincial elections in May. In both those Mogale City wards, the FF+ finished ahead of the ANC in 2016.

The DA’s 1,000+ vote win in 2016 was wiped out in the 2019 provincial elections in Stilfontein. The FF+ beat the DA here by 106 votes. If there was ever an opportunity for the FF+ to win a ward off the DA, and continue that momentum from their good returns in the 2019 national and provincial elections, it was in Stilfontein. The FF+ not only rode that momentum, they turned it into a convincing win. A win which will give them great motivation to challenge the DA in other wards with similar voter profiles. There are two such wards coming up – Rustenburg and Roodepoort – within the next few weeks.

The FF+’s win in Stilfontein was best illustrated by the returns at Driefonteine school. In 2016 the DA won this voting district by over 300 votes. On the 2019 provincial ballot, the FF+ beat the DA by 80 votes. On Wednesday night the FF+ beat the DA by over 200 votes. Turnouts tend to be lower in by-elections compared to national, provincial and local government elections, these numbers mask the FF+ growth in the voting district, and the DA’s free fall.

At the larger People’s Hall voting district, the DA beat the FF+ by over 750 votes in 2016; on the 2019 provincial ballot the FF+ just pipped the DA by 26 votes. On Wednesaday night that majority for the FF+ in the district grew to over 250 votes.

Embalenhle is near the town of Secunda. It is in oil refinery and coal country. Govan Mbeki also encompasses Bethel, Evander, Charl Cilliers and Leandra.

The EFF easily won the 38th street voting district in the ward, getting 68% of the vote, compared to the ANC’s 31%. In 2016, the ANC got 65% of the vote here, while the EFF mustered 26%. This was a remarkable surge by the EFF, but not enough to flip the ward to the red berets. The EFF will see this ward as a major pick-up opportunity in 2021.

Two weeks ago, the EFF showed good growth in a by-election in Siyathuthuka, next to Belfast in Mpumalanga. The EFF will be upbeat about their growth in this province.

Jeppe’s Reef is a border town on the R570 road by the Matsamo border post with Swaziland.

Nkomazi municipality lies next to the Kruger National Park, Swaziland and Mozambique. Its principal towns are Malelane and Komatipoort.

The ANC had a comfortable hold in this super safe ANC seat. They will be happy they received 90% of the support here in this ward. This bodes well for the 2021 local government elections.

The next round of by-elections are next week when the DA will have to pick up the pieces and defend a tricky ward in George in the Western Cape. They will have to fend off the incumbent councillor who defected to Patricia de Lille’s GOOD, and an ANC which got over 30% of the vote here in 2016. DM