The challenges of bicycle commuting in car-crazy Joburg

The challenges of bicycle commuting in car-crazy Joburg 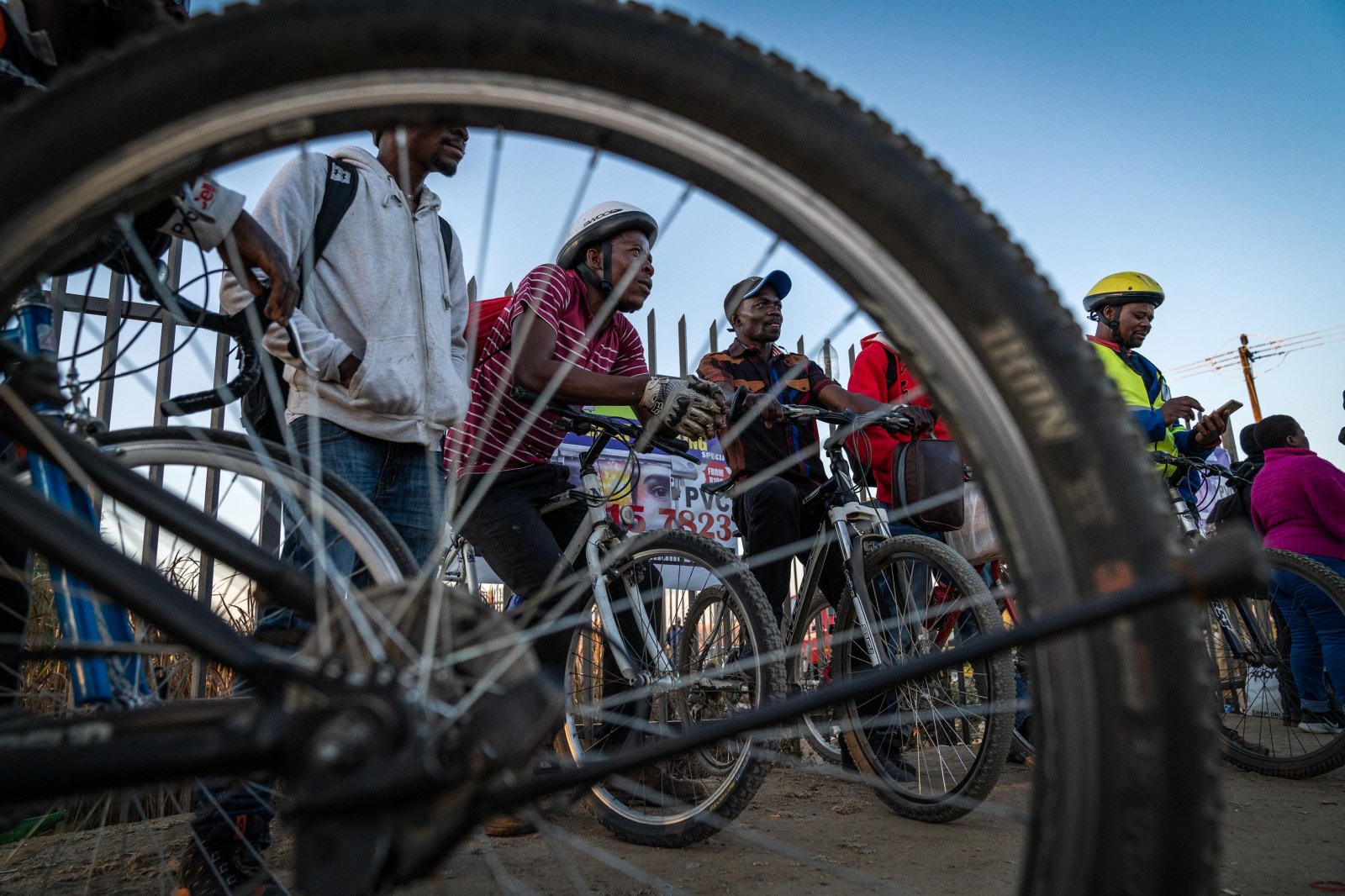 Cycling to and from work is a common choice made by many workers from Diepsloot who say that they save around R1000 - R1500 per month on transport costs. Picture: Ihsaan Haffejee

Cycling is affordable and good for the environment but South Africa’s busiest city has failed to make room and safety measures available for those who cycle.

Making the first and final stretches of daily commutes easier, or the so-called “last-mile problem”, is the Holy Grail of transport planning. In Diepsloot, in Johannesburg’s far northern reaches, the proverbial last mile is a very long one. And for thousands, it is taken by bicycle.

Clifford Ncube, 36, is among those who wind the gravelly path out of the township every morning, through the huge upmarket residential and retail developments sprawling north of Fourways, and into the city.

Ncube cycles 22km to and from Woodmead every day, where he works as a security guard. Most of Diepsloot’s cyclists keep properties in Joburg’s affluent neighbourhoods safe and neat as security guards and gardeners. The distance he cycles is not exceptional. Vasco Nyirongo, 40, and Shadrack Marufu, 36, ride a similar 20km stretch every day to gardens in Kyalami. Vincent Zimba, 28, cycles 30km each day to Zoo Lake in Saxonwold.

“It’s the best transport for charges,” explains Ncube. He sends between R1,000 and R1,500 that he would otherwise spend on taxi trips to his family in Zimbabwe. It’s a huge boost to the R4,000 he earns a month.

Life and death on a bicycle

Although cyclists save money, they are vulnerable in the traffic.

“The taxis are killing us,” says Clement Nkomo, 29. Nyirongo interrupts him: “Not only taxis!”

In January 2017, Nyirongo was hit by a private vehicle that swerved suddenly in front of him. His ankle was torn open as he was flung into the air. He remembers being “on top of the cars”.

Nyirongo considers himself lucky. He knows many Diepsloot cyclists who have been killed on the roads. Despite this, well-being is one of the main reasons so many of the township’s residents get around by bicycle.

Nyirongo cannot remember being seriously ill since he began cycling in 2007, and Ncube says that his fitness means he beats common colds easily.

“It’s like a thermostat,” Ncube says of his bicycle. He gauges his health by how well he is cycling. Fewer days sick means more days available to work.

Among the antidotes identified by Diepsloot’s cyclists for their dangerous commutes is an increased cycling infrastructure. A newly built pathway that separates pedestrian and vehicle traffic alongside Steyn City, north of Joburg, for example, has made a few kilometres of their journey demonstrably safer.

Is cycling only for the rich?

Apartheid spatial planning made a misery of most daily commutes. Initial efforts to address part of this legacy in Joburg through public investment in cycling, while well intentioned, were poorly coordinated according to Njogu Morgan, a post-doctoral research fellow in the University of the Witwatersrand’s History Workshop.

Data from Statistics South Africa’s National Household Travel Survey shows that by 2013, affordable modes of transport less harmful to the environment were not working for people. It was found that about one in 10 people used either a bus, train or bicycle to get to their traditional healer or church. Only slightly more – about two in every 10 – used those forms of transport to get to their grants office or police station.

At around the same time, Joburg under then mayor Parks Tau, began building cycling expertise and knowledge, and rolling out cycling lanes. The lanes came at the end of an ambitious set of new transport policies in Joburg, including the Rea Vaya bus system.

During its 2016 local government election campaign, however, the Economic Freedom Fighters (EFF) attacked the cycle lanes as a vanity project that would serve rich commuters. Joburg’s new mayor Herman Mashaba, whose Democratic Alliance formed a coalition with the EFF when ousting Tau and the ANC, abandoned support for bicycle lanes shortly after taking office.

While a wealthy minority spend tens of thousands of rands on finely-tuned recreational bicycles, they seldom use them to commute. Fewer than 0.5% of people from Gauteng’s wealthiest households commute by bicycle. In Diepsloot, cyclists seldom pay more than R1,000 for a bicycle, if at all. Ncube, Nyirongo, Marufu, and Zimba’s bicycles were all hand-me-downs from former employers.

The cycling miracle of Springs

Joburg’s failure to roll out infrastructural support for cyclists is not new. In the 1930s, motorisation meant cities were grappling with how to accommodate all road users. The Johannesburg City Council sent transport planners for training in road design and building in the United States. The way we get around changed forever as a result. Stop signs, traffic lights and even the lines we paint on the road to separate the cars travelling in one direction from those travelling in the other, are all transport innovations from that decade.

But where Joburg failed to accommodate cyclists – the one cycle lane constructed along Louis Botha Avenue has since been swallowed by motor vehicles – Springs on Gauteng’s East Rand succeeded in building a network of extensively used lanes.

The mines in Joburg became profitable very quickly, while those in Springs, most of which were owned by Joburgers, including Ernest Oppenheimer, took more than 20 years. One outcome of the resulting economic boom was that whites began buying cars at breakneck speed.

In Springs, where consumption was less conspicuous in the first half of the 20th century, cycle lanes are today a shadow of their former glory. But in the 1960s, up to 2,500 workers were recorded cycling the 8km between KwaThema and the Nuffield factories in the early hours of the morning.

Morgan believes that there are lessons to be learned from the fleeting examples when South African cities encouraged cycling. These include the climate emergency. The 650kg of carbon per capita currently pumped into the atmosphere every year by Johannesburg’s car-centric transport is likely to double by 2040. Job creation is another factor because cycling encourages low-skill industries, health and spatial cohesion in the face of South Africa’s entrenched divisions.

“The more people can meet with each other on an equal footing, the better,” he says.

In Diepsloot, however, cyclists face more problems than solutions. Winter is the worst time of year, they say. Joburg’s gardens grow more slowly, which means less work for gardeners. And shorter days mean cyclists brave the traffic in inky dark, cold mornings and evenings with little reflective gear and only narrow gravel pavements for protection. DM