Analysis: The riddle of Bruce Koloane, the Waterkloof saga’s most dependable fall guy 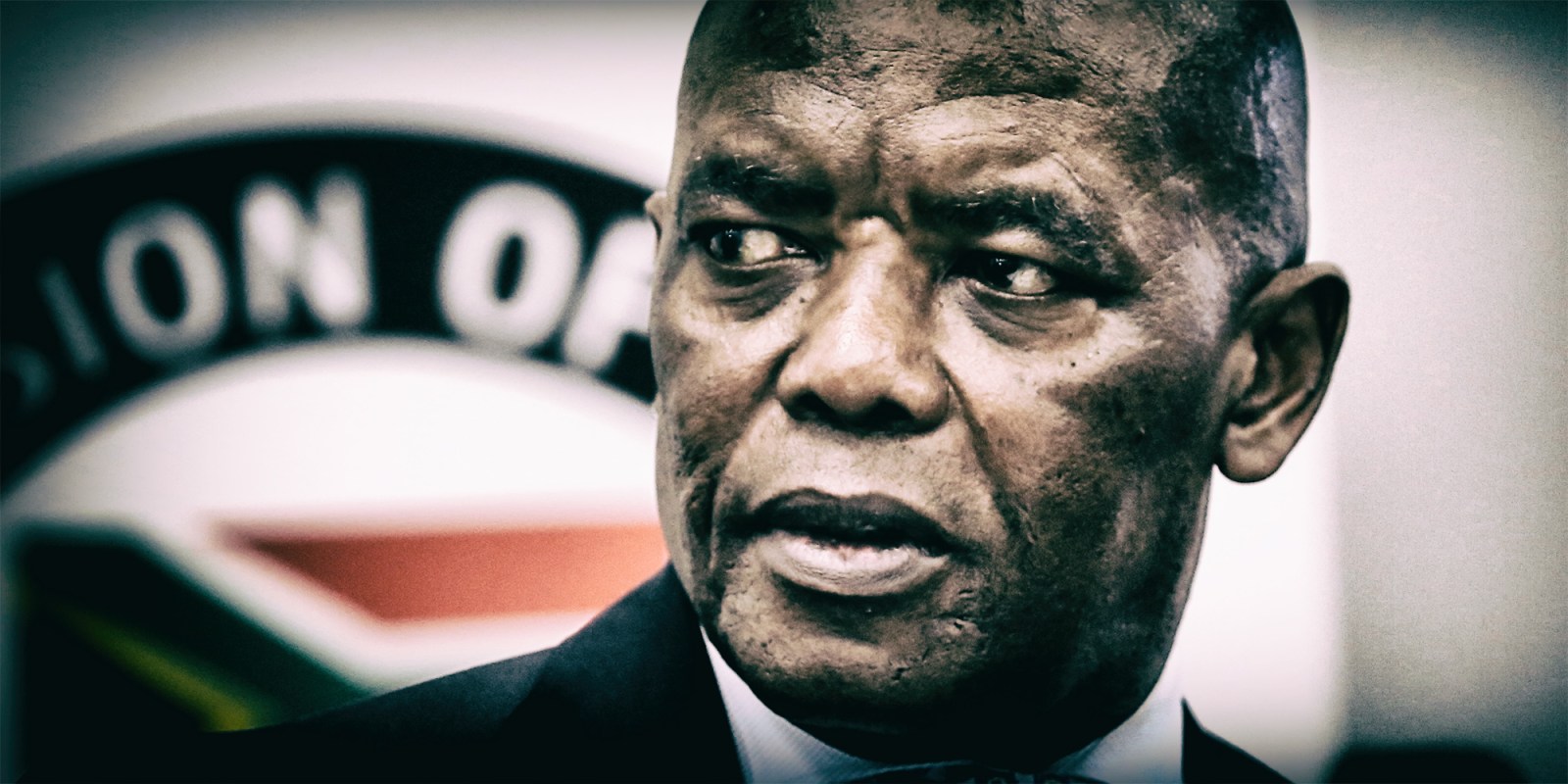 In order to survive the Zondo Commission, former chief of state protocol Bruce Koloane had to effectively throw his own reputation under the bus – painting himself as a pitiful character who name-dropped to get things done and threw his weight around to convince his diplomatic counterparts that he was more important than he really was. But the story just doesn’t add up.

The confetti had barely been swept up from the Guptas’ 2013 Sun City wedding when a fall guy emerged for the decision to let their guests land at the Waterkloof military air base. That was when the name “Bruce Koloane” first entered the headlines.

But Koloane was already a diplomatic big cheese: he’d gone from working as chargé d’affaires at the South African embassy in Beijing to serving as South Africa’s ambassador to Spain, before returning home in 2010 to take up the job of chief of state protocol.

South Africa’s ambassador to the UN, Jerry Matjila, told the Zondo Commission this week that Koloane was a diplomat of such excellence that even the Waterkloof saga could not be allowed to stain his colleague’s record.

“When I understood the totality of who Koloane is,” Matjila said, somewhat enigmatically, “the [Waterkloof] mishap could not erase the totality of his contribution to South African diplomacy”.

Matjila was saying this by way of explaining how Koloane, despite being categorically found to be the baddie of the Waterkloof saga by a government investigation, would escape with a two-month suspension and subsequently be appointed as South African ambassador to the Netherlands.

The story of Bruce Koloane is riddled with contradictions.

On the one hand, we have the Koloane painted by Matjila, and the ongoing bullet points of Koloane’s CV: a diplomat of such talent that his skills and experience could not be wasted by the Department of International Relations and Cooperation (Dirco). A diplomat who made one “mishap”, yes, but whose total contribution to South African diplomacy was immense.

On the other hand, we have the Koloane painted by Koloane at the Zondo Commission on Tuesday 9 July: a man willing to lie about the wishes of South Africa’s top leadership in order to achieve approval for a delegation of Indian guests on a wedding jaunt to land at a military air base.

A man who went to some lengths at the Commission to publicly berate himself for having “failed in my duties”, and who confessed to “a clear abuse of my portfolio as head of protocol”.

And a man who was willing to potentially squander his career in this way for – well, nothing.

“There was nothing in it for me at all,” Koloane told the Commission, bar his interest in maintaining warm diplomatic relations with his Indian counterparts, and in encouraging the former Indian High Commissioner to see him as a “man who can get things to happen”.

Koloane was willing to ride roughshod over diplomatic protocol in order to make himself seem important, in other words.

How does that square with the other version of Koloane – the master diplomat so highly regarded by colleagues like Matjila?

Who is this guy?

Let’s go back. It’s May 2013, and the government team tasked with investigating the circumstances under which the Guptas were able to land an aircraft at Waterkloof release their report.

It is unambiguous: the two officials responsible for securing the use of the base for the Guptas are protocol chief Bruce Koloane, and Waterkloof second-in-command Colonel Christine Anderson.

The report leaves no room for the possibility that Koloane and Anderson acted from a position of unknowing error or misunderstanding, as we wrote at the time. It states that the two brought about the “manipulation of the process”. They “shared a common purpose and acted in concert”.

Justice Minister Jeff Radebe, releasing the report to Parliament’s National Assembly, had even harsher words for the duo.

“Evidence shows that the two officials are not fall guys or scapegoats, but the masters of the manipulation process,” he said. “They were on a frolic of their own.”

Masters of the manipulation process

Fast forward a year and a bit, and one master of the manipulation process – following a two-month suspension and a year’s sabbatical – is made South African ambassador to the Netherlands. Opposition parties lose their minds; former finance minister Trevor Manuel asks at a public lecture: “How do we feel about private planes landing at our military airports in clear violation of rules, and the parties fingered as culprits being rewarded afterwards?”

It was then that Koloane’s name returned to the spotlight after the #Guptaleaks emails suggested some intriguing new information about the mysterious Mr Koloane.

The emails suggested that Koloane was using his position as Dutch ambassador in July 2015 to help broker business deals between Tony Gupta and Dutch company KPG Greenhouses – around the same time that two of Koloane’s friends stayed at the Guptas’ upmarket private game lodge in Limpopo.

The emails also suggested that Koloane sent Gupta lieutenant Ashu Chawla documents about a possible coal mining site in KwaZulu-Natal in the midst of the Waterkloof fallout.

Yet Koloane told the Zondo Commission this week that he had no relationship with the Guptas beyond dealing with them a few times when they were guests of former president Jacob Zuma at official events.

In fact, so hazy is Koloane’s knowledge of the Guptas that he couldn’t even tell Deputy Chief Justice Ray Zondo for certain which Gupta brother made a request in February 2013 to use the OR Tambo diplomacy lounge for their wedding guests.

“I think it was Tony Gupta… although I might be mistaken,” Koloane mused.

At the end of Koloane’s testimony to the Commission, Koloane was asked about some of the #GuptaLeaks allegations.

On the matter of Koloane’s having arranged for his friends to stay at the Guptas’ Limpopo guesthouse in 2017, Koloane confirmed that this was the case. He said he had asked for his friends to be granted a good rate because he had previously heard the Guptas mention “at a cultural event” that they owned a great lodge.

With regards to Koloane having assisted Tony Gupta in making contact with a Dutch greenhouse business in 2015, Koloane coolly confirmed this too, saying that he had an ambassadorial duty to assist South African citizens in such cases.

The most obvious conclusion to be drawn here is that Koloane’s relationship with the Guptas must, surely, have been more intimate than he previously suggested to the Commission if there was an ongoing exchange of favours between the two parties some two years after the Waterkloof landing.

But the second aspect that doesn’t make sense is the following:

At various points in his Zondo testimony, Koloane was at pains to paint his entire experience around the Waterkloof saga as darkened by enormous strain, stress, guilt and trauma. Several times he mentioned the negative impact it had on his wife and children. Koloane said the whole family underwent therapy to “try to forget these things”.

He went so far as to suggest that he had originally omitted key aspects of his involvement in the Waterkloof saga in his testimony to the Commission because his memory had blanked them out as a form of psychological protection.

“There are some [memories] that you want to forget and close the chapter on and never ever get back to them in your life,” Koloane told the Commission.

It would be unbelievably churlish to suggest that Koloane is making that stuff up, and indeed he sounded perfectly sincere in his testimony.

But if you’ve just almost ruined your career and your reputation by performing – by Koloane’s own admission – completely unnecessary favours around the Waterkloof landing for a family you barely know, and brought extreme hardship on your own family as a result, why would you continue to interact with and assist the now-notorious Guptas two years later in your next role?

The final major question that the Koloane riddle leaves us with is regarding the alleged non-involvement of Zuma in the Waterkloof affair, with Koloane telling the Commission that in fact the former president and his Cabinet ministers had never instructed him in any way to green-light the Waterkloof landing.

This corresponds with what the Presidency told the task team investigating the landing in 2013: that Koloane was lying, and “at no point did the president give instructions to Ambassador Koloane or discuss the issue of the landing of the aircraft with him”.

Zondo had harsh words for Koloane about his mendacious behaviour in this regard.

“That was something very, very serious to say about people occupying those positions in the executive,” Zondo told Koloane, pointing out that Koloane had effectively smeared Zuma’s name across the country.

Yet Zuma would go on to reward Koloane for this apparent slander with a plum ambassadorial role.

Like so many aspects of the Koloane story, it doesn’t add up. The Zondo Commission is now faced with the unenviable task of doing that messy computing. DM