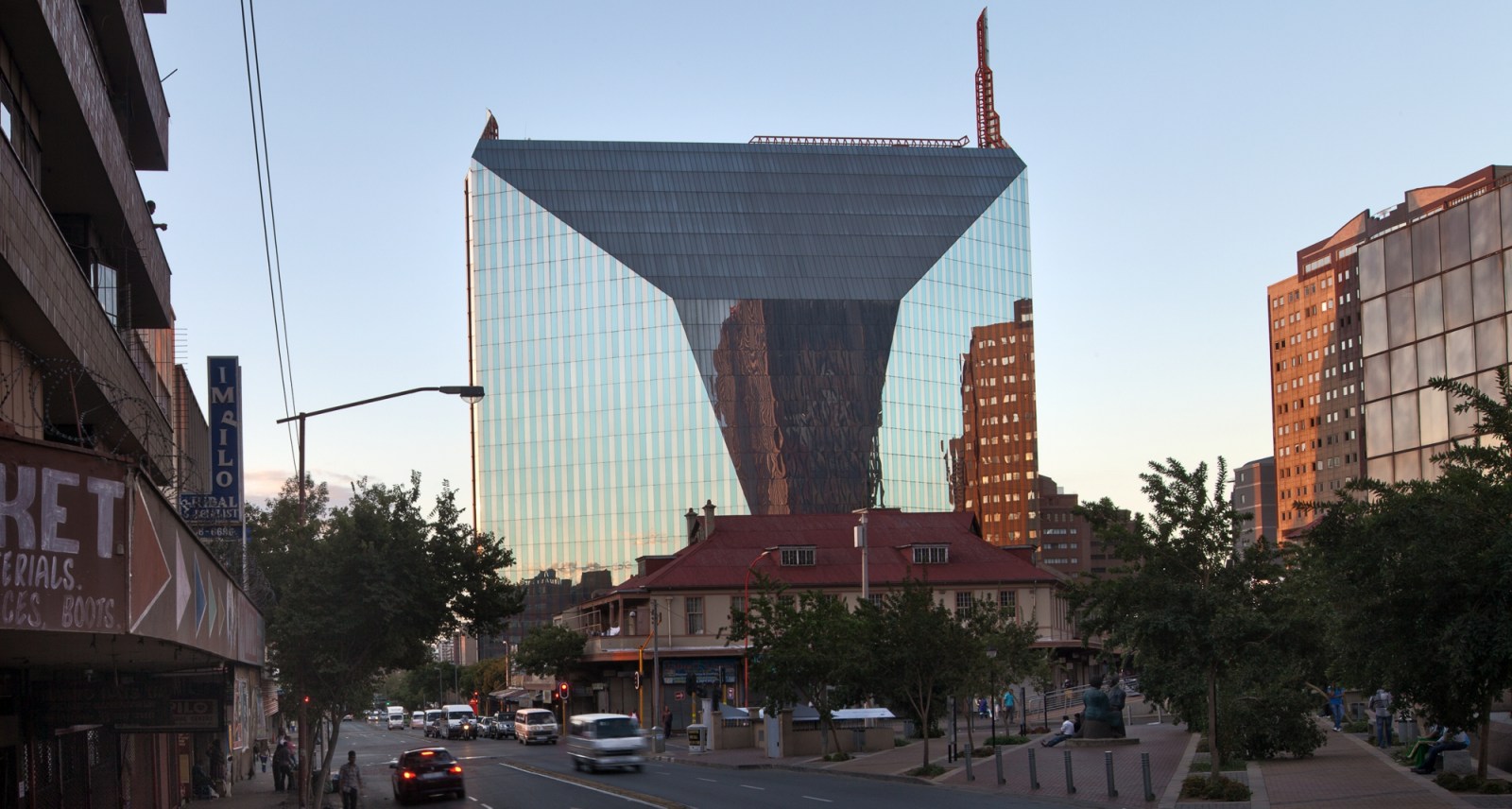 In this episode of Structure & Culture, we look at an iconic edifice in the centre of Johannesburg. Standing at 80m tall, shaped like a diamond with its reflective facades and sharp angles, 11 Diagonal Street is an eye-catching structure.

“It’s a building that inspired me from the very first time I came into Joburg. I looked at that building, and the first word that came into my mouth was: ‘Wow’,” says Thulani Sibande, co-director at Paragon Architects South Africa.

In the late 19th Century, when the gold rush was at its peak and Johannesburg started to expand, Diagonal Street was dubbed “Jubilee Street”.  According to the Gauteng tourism site, early maps place the street as a no-man’s land – where “Indian settlers bought white-owned property and set up businesses through nominees”. The population of Johannesburg grew rapidly, creating what is now the historic CBD.

In 1983, when the construction of the building started, led by architect Helmut Jahn, buildings lining up Diagonal Street were mainly low-rise, no more than two to three storeys high.

Jahn, who is also behind the Messeturm in Frankfurt, Germany and Suvarnabhumi Airport in Bangkok, Thailand, says:

“Johannesburg, like many new cities in this country, is a product of the machine world.  The mechanical gridiron geometric pattern of streets provides a perfect context for geometric buildings.  The initial developments were small-scale and spread over the whole central area.  Gradually, new islands of larger-scale private development spread out from the city core.”

“For this building, the site is a full-block development in an area known as Newton, adjacent to the central business district of Johannesburg.

South Africa became the transition between United States and Europe.  There was a great spirit and belief on the part of the client (a division of De Beers) that a futuristic architecture would point the way to a better social and political future.”

The shape of the building is directly inspired by the client’s identity: “The cut, reflective diamond became the selected Figure of Hope. The immediate vicinity of the building provided site suggestions for contextual relationships on which to develop a design,” says Jahn.

Sibande points out the extraordinary contrast between the architecture of the structure and the neighbouring buildings.

“If you are really a daring architect, like Helmut Jahn, you would come up with something extravagant, like something completely, completely different. Something that will stand out. You should also respect the buildings that surround the site where you want to create that structure. It gives a positive impact on to the neighbouring buildings, by using its facade, its angled, faceted façade to reflect the neighbouring buildings.

“To me, it’s a positive thing that this building is imposing in that area. It’s not saying, ‘Hey, you, three, four-storey, little buildings, I don’t give anything about you…’ Instead, it’s bringing all those elements into its facades, where all those buildings actually reflect directly on to that glass,” he adds.

Sibande also notes that, because there is no parking accessible from street level, the building is accessible to all; this differs from surrounding modern buildings that usually need passers-by, visitors and tenants to enter a building via a flight of stairs.

“It was designed in such a way that you can walk from the street, the pavement directly into the front door. There are some slightly low walls that create a frame around that building. But from the eastern side, you can easily walk down from the street level, and then you access that building straight away. Most buildings are enclosed with parking structures right around them. You first have to go in and then take a lift shuttle to go up to the ground level, which is a little bit of a hostile environment,” he explains.

“If you look at that building now, you compare it with any other building that’s happening in the world. It’s not different; it’s done in the ’80s, and it’s the best building ever. And it’s going to remain like that for many years to come.” ML