Guptas permitted to land at Waterkloof in 2013 due to ‘misunderstanding’, Zondo hears 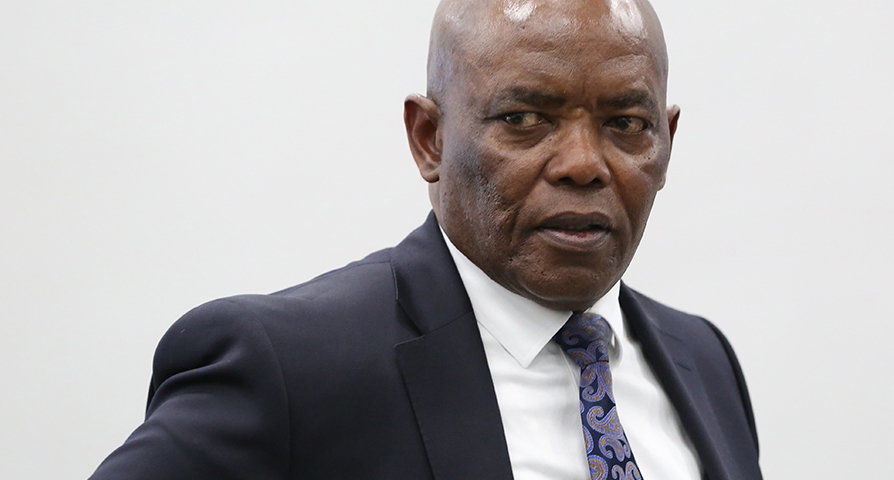 Bruce Koloane, former chief of state protocol who is now an ambassador of South Africa in the Netherlands is at the state capture inquiry where he is expected to give testimony about the landing of an air plane that landed at Waterkloof air force base.Picture: Thapelo Morebudi/The Sunday Times.

Former Chief of State Protocol Bruce Koloane has never publicly given his account of the events that led to the Gupta family being permitted to make use of the Waterkloof military airbase for a wedding in 2013. This week he is in the hot seat at the Zondo Commission. And, appearing for the first time on Monday morning, Koloane was in highly defensive mood – insisting that his approval to use Waterkloof was given due to a ‘misunderstanding’.

Former Chief of State Protocol Bruce Koloane says that the idea that he personally gave permission for the Gupta family to use the Waterkloof airbase in 2013 was the result of a “misunderstanding”.

Appearing before the Zondo Commission into State Capture on Monday morning, Koloane insisted that he never gave the go-ahead to the Department of Defence to approve the use of Waterkloof.

Banging his fist on the table for emphasis, Koloane said: “There is no way I will have given an instruction to an official from another department to issue [such permission].”

Yet en email was sent from Koloane’s personal assistant to the Department of Defence indicating that Koloane had indeed “telephonically approved the request”.

When quizzed on this, Koloane insisted that his PA must have misunderstood him.

In Koloane’s version of events, the first he heard of the Guptas’ wedding plans was when he received a phone call from the Indian High Commissioner to South Africa, the unfortunately-named Virendra Gupta (no relation to the family). The High Commissioner told Koloane that a flight clearance request had been submitted for what he described as a “ministerial delegation” from India who would be visiting South Africa.

Koloane then contacted the Department of Defence to say: “The High Commissioner is on my case, can you please process this application?”

Koloane told the commission that he was embarrassed by the fact that the High Commissioner had not received any response to his request after six days, as he did not want to damage diplomatic relations with India.

At several points, Koloane referred to himself as the “conduit”: the go-between to ensure smooth visits for foreign dignitaries visiting South Africa.

He never instructed the Department of Defence to approve the Waterkloof landing request, Koloane said; he merely asked the department to “expedite” the “processing” of the request, regardless of the outcome.

Koloane was subsequently informed by a defence official that the Gupta landing request did not contain a note verbale: the diplomatic memo which would be required in such instances.

Earlier, the Zondo Commission had heard from former Chief of State Protocol – and current South African ambassador to the United Nations – Jerry Matjila that at least one, and sometimes two, note verbales would ordinarily be needed to facilitate such a request.

Matjila said that the normal process followed in advance of a visit from foreign dignitaries was as follows:

“Once Dirco, though the bilateral desk [of the two countries involved] receives a note verbale from the resident mission, the bilateral desk notifies protocol. Through that note, we expect them to indicate the purpose of the request and the timing. Once that part has been agreed upon, we have to find if the head of state is okay with the request, especially the timing. Once we are certain the President is okay with this type of visit… the preparations start.”

In the case of the Guptas’ 2013 landing, none of these processes was officially followed – though the question of former president Jacob Zuma’s involvement is certain to be raised by the commission, after previous witnesses testified that Koloane said that “Number One knows about the flight”.

Koloane acknowledged that he was present previously at a meeting held at OR Tambo International Airport with former Transport Minister Ben Martins, the CEO of the Airports Company of South Africa (ACSA) and Tony Gupta, to discuss the possibility of the Guptas’ wedding guests landing at OR Tambo.

There, Gupta told the other men that he would like to use the diplomatic lounge at OR Tambo for the wedding delegation, which would include Indian ministers and perhaps “even one of the [Indian] vice-presidents”. Gupta also asked for the use of a designated area to provide a “cultural performance”.

Koloane said that both he and the ACSA CEO advised that the use of OR Tambo in this regard would not be “viable”, because it was also in use by “our own political leadership”. He advised the Guptas to consider approaching private airfields.

Ambassador Matjila had earlier explained that some foreign dignitaries have to land at OR Tambo instead of Waterkloof due to the size of the aircraft in use.

“It’s easier for us when it’s Waterkloof because it’s exclusive, but not many land there,” Matjila said.

The ambassador confirmed that because the purpose of the visit was to attend a private wedding, the Guptas’ party ought to have landed at a “civilian” airport unless there was some exceptional security threat.

“We do have a lot of high-profile weddings [in South Africa],” Matjila said. “They don’t go to Waterkloof.”

Matjila also gave the commission some insight into the other diplomatic headaches created by the Guptas’ wedding delegation.

He recounted his consternation upon learning that some of the Indian state ministers who attended the Gupta wedding had gone “missing” after “enjoying [the wedding at] Sun City”. He learned that the ministers in question had chartered a private aircraft to travel to Cape Town.

“Then I got even more worried,” he said. “If something happens in Cape Town, we could be blamed as South Africa.”

The relevant ministers eventually left for India in more civilian fashion – by means of an Emirates flight via Dubai.

Matjila also mentioned that he believed some of the Indian ministers made time for “meeting with MECs in the Free State” before departing – but he said this was not part of any official government business. DM