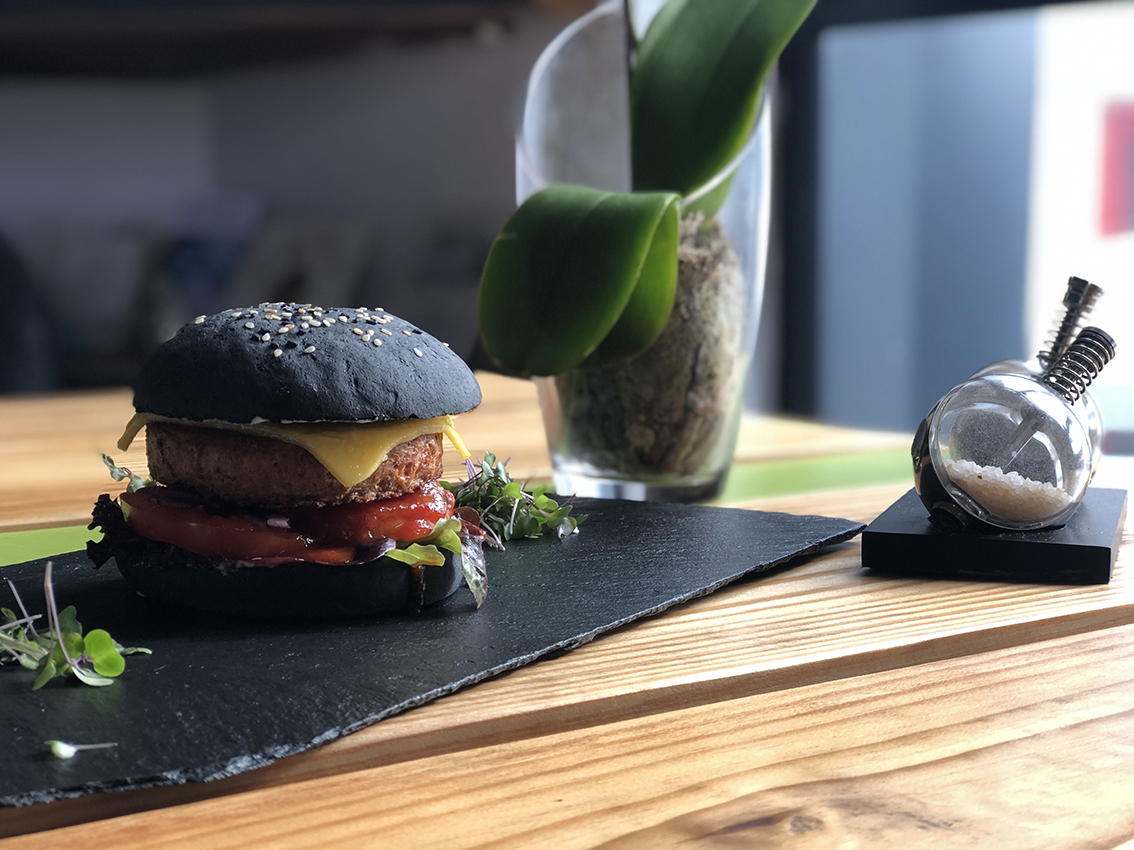 The Kind Kitchen began serving a small vegan menu from Jay Mac’s home kitchen in 2018, which was only available via Uber Eats. The demand for his food prompted him to crowd-fund the tiny café and deli. There are only four tables. Four very busy tables.

Sometimes it seems the world is split in two by one very defining fissure: on this side, the carnivores; on the other, the vegans. Vegetarians are so passé and currently enjoying a period of calm where they are not being ridiculed and denigrated as much for their choices while they quietly munch on a toasted cheese and tomato sarmie.

The two factions mentioned above are far better targets, particularly for each other, and emotions – especially on social media – run hot and high, with a fervour akin to that of religious fanatics.

Google searches can be so much fun. For example, in April 2019, “a couple of carnivores decided to eat raw, bloody liver at a vegan protest in Melbourne as their own form of protest against veganism” . The March 2019 headline, “Man eats raw squirrel to taunt vegans but freaks out meat eaters”, is all you need to read. Neither of those actions sounds at all pleasant; they must have had really strong courage of their convictions. Idiots, I reckon.

A reverse search for information about protests by vegans turned up results (on the first page; who ever looks past that?) titled “Here’s why well-intentioned vegan protesters are getting it wrong” and “Monday’s demonstrations were organised by vegan protest movement … and hurt the vegan cause”.

As an omnivore – sort of a necessary requirement for a food writer, and certainly an advantage – I get to eat across the spectrum with few limitations imposed by lifestyle and nature. In this era, however, the argument is not only for health or compassionate reasons, but for the preservation of this poor planet which has been used and abused like an old crack whore.

With Facebook timelines filled with gruesome images (where are your community standards now, Zuckerberg?) and much chest-beating and rage, it’s a breath of fresh air to meat – sorry, meet – someone like Jay Mac (McNamara), founder of The Kind Kitchen, a vegan café in Woodstock.

Just as well, since the premises above are occupied by a steakhouse.

“Veganism is a great path for us to follow as a species but I’m a realist and know that everyone has to follow their own way,” says Jay.

“It’s not for everyone but my aim is to help people transition and if that means one meal a week then I’m achieving something and educating.”

The Kind Kitchen began serving a small vegan menu from Jay’s home kitchen in 2018, which was only available via Uber Eats. This is a concept known as a Dark Kitchen, a strategy designed to service the food delivery market (the growth of which is annoyingly apparent in my area, with the endless buzz of scooters all night in previously peaceful streets).

The demand for Jay’s food prompted him to crowd-fund the tiny café and deli. Seriously. There are only four tables. Four very busy tables.

“Yeah, Die Antwoord are vegans, and they’re in the studio recording nearby. They posted on Instagram, which is why I think we’ve been so busy today,” said Jay. The video got more than 70,000 views, so he could be right. Ed Sheeran and Passenger also stopped by when their tour hit Cape Town in March, 2019, and that publicity didn’t hurt the cause either.

The menu at The Kind Kitchen is extensive, from breakfasts to sweet treats, with a mind-boggling selection of faux animal products.

“Our aim is to source most of our ingredients from local farmers and producers. We also create dishes which are seasonal and forage for items like kelp and mushrooms in order to make our dishes even more seasonally relevant,” explains Jay.

“Our suppliers we source our ingredients from help us to be more responsible as we grow in demand. This is no easy task but we happily walk this path as opposed to the unsustainable alternatives we’ve done for far too long as a society. Change is never easy. It takes courage to go against the norm!”

The deli shelves are filled with plant-based products to use at home, and you can also get your liquid smoke here. Yes, that’s a thing – literally smoke that has been made into an intensely concentrated liquid (zero nutritional values) which adds a punch of flavour to a variety of dishes.

“Come try some delicious Southern style chicken or a Philly cheese steak made from wheat meat called Seitan,” suggests Jay. “Another firm favourite is our Fried Egg sandwich made from tofu and our own gooey yolk made from nutritional yeast and turmeric, to name a few items.”

I was keen to try a burger made with Beyond Burger™, the world’s first plant-based burger that looks, cooks, and satisfies like beef without GMOs, soy, or gluten.

“We have been proudly creating our version of the cheese burger with this plant-based patty since its arrival in SA in November, 2018,” says Jay.

On this note, there is an issue which South African vegans are loathe to address, one for which Jay says he’s prepared to take the flak with his opinion: No animals are harmed, but imported products stomp all over the place with massive carbon footprints. Plus, they’re hellishly expensive for us.

So I ordered the Basic Bitch Burger (without fries, because they were sold out by the time I got there – 10kgs of potatoes, thank you Die Antwoord). It comes with mustard, mayo, tomato, cos lettuce, gherkins, red onions and melted cheddar cheese. I chose the charcoal activated bun for no other reason than I thought it would look groovy. I was not wrong.

As for the burger itself, Jules/Samuel L Jackson himself would have declared it to be tasty. On the claim that Beyond Burger “looks, cooks, and satisfies like beef” I have to respectfully disagree on all counts. It was good, but it didn’t deceive me for a second. The cheese, though… now that was pretty flipping amazing.

“If you’re thinking of going vegan, then challenge yourself to try it either at home or at a restaurant and you’ll be surprised at how easy it is to find good wholesome meals that don’t just consist of French fries and a green salad. Maybe you just want to start with a coffee. Well, most coffee shops now offer at least almond and soya milk,” says Jay.

Yes, I would eat vegan here again, where the first criterion is yummy food. Everything else is just a bonus. DM