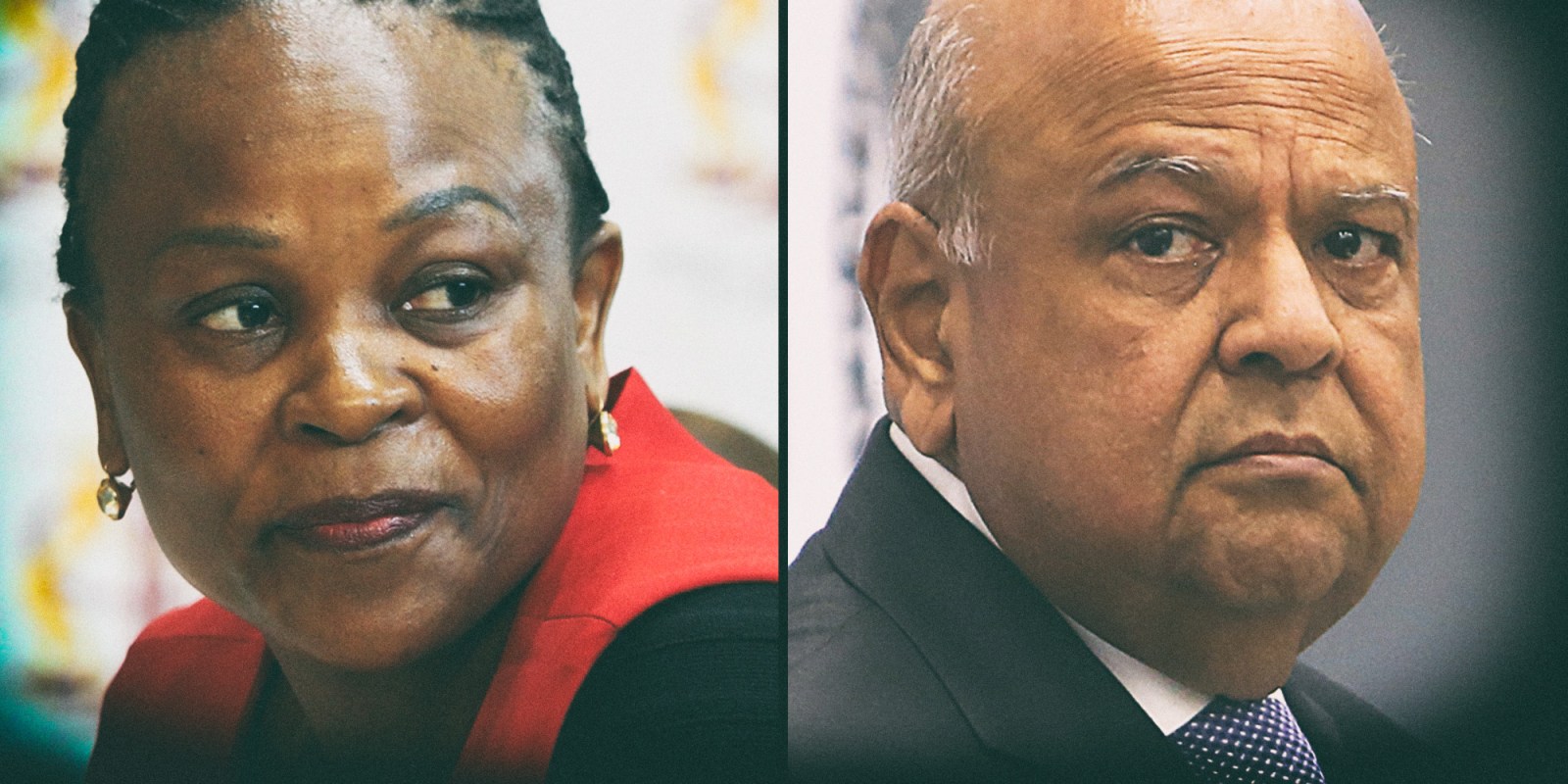 In a second finding against Pravin Gordhan, Public Protector Busisiwe Mkhwebane said on Friday that her office had found that the Public Enterprises Minister had misled parliament about meeting Ajay Gupta. Also according to her, and contrary to the findings of a judicial inquiry, she insisted that the SARS unit was in fact rogue.

At a press conference in Pretoria on Friday, the Public Protector, Busisiwe Mkhwebane, reported that allegations had been substantiated that Public Enterprises Minister Pravin Gordhan had violated the Executive Ethics code by failing to disclose that he met a member of the Gupta family in 2012.

The public protector’s report centered around investigations involving Gordhan and the SA Revenue Services, with Mkhwebane attributing their close connection as the reason why she merged them into the same report.

Mkhwebane said that Gordhan had misled parliament by initially telling it that he has never met the Guptas, but then later recanting after his Chief of Staff reminded him of an incident where he had met Ajay Gupta.

Mkhwebane – in her second finding against Gordhan this year – found it was “implausible” that Gordhan did not remember having met one of the Gupta brothers, due to the prominence of State Capture at that time.

Another focus within Mkhwebane’s report were allegations of maladministration, corruption and improper conduct by SARS. According to the public protector, her investigation has substantiated the allegations of an Intelligence Unit operating within SARS.

Mkhwebane has found that an intelligence unit, known as the SARS Rogue unit, had existed and had conducted unauthorised surveillance. She said that Gordhan was directly involved in its operation, although she did not specify how.

Her insistence of the existence of a “rogue unit” is at odds with other findings that have discredited reports on the establishment of an illegal unit. This includes a finding by retired Judge Robert Nugent in October last year that the unit was not unlawful but that the narrative was used as an excuse to purge top officials.

Responding on Friday afternoon, Pillay issued a statement through his attorney saying that the Public Protector’s  findings – as based on the media briefing as he was not privy to the report beforehand – were “facually and legally flawed”.  After studying the report,  “appropriate legal proceedings for the protection and enforcement of his rights” would be instituted.

As far as Mkhewebane is concerned, however,  “SARS is not mentioned as one of the intelligence structures and can only work with others in principle of cooperative governance”. Mkhwebane said her report “should not be viewed as stifling SARS effectiveness and efficiency of SARS in their investigation of tax evasion” and illicit economy, however it is  to “ensure that they do not encroach the work of the territory of State Security Agency”.

Mkhwebane said her investigation had shown that SARS was able to procure intelligence equipment without having followed the proper procurement prescripts.  The SARS intelligence unit went on to perform surveillance on “prominent people” and the National Prosecuting Agency.

In 2007, SARS intelligence unit intercepted communication within the office of NPA, without an order from a designated judge, said Mkhwebane.

As a result, Mkhwebane has found that SARS has failed to provide her with documents to show that it followed the proper procedure in procuring intelligence equipment to conduct surveillance.

Mkhwebane said she has evidence to show the existence of both the intelligence unit and the equipment they use for surveillance. If its operation was lawful, it is unclear why they would keep it a secret, said Mkhwebane.

She said the failure (by SARS) to provide her with records was aimed at perpetuating the notion that there was not such an intelligence unit at SARS.

The Public Protector then directed her recommendation to the Minister of State Security to “implement in totality the Inspector General report” and “ensure that all intelligence equipment at SARS are returned and audited”. And also “avail a declassified report to public protector”.

The Public Protector recommended “appropriate remedial actions” to President Cyril Ramaphosa that he “take note of the findings of the report as it relates to the erstwhile Minister of finance Pravin Gordhan and take appropriate disciplinary actions against him within 30 days”.

In her first finding against Gordhan in May, Mkhwebane recommended Ramaphosa take disciplinary steps against him after she found he had unlawfully approved a pension for Pillay and then proceeded to rehire him part-time.

Mkhwebane is expected imminently to release her findings relating to a R500,000 payment from Bosasa during Ramaphosa’s campaign to win the ANC presidency at Nasrec.

Mkhwebane’s time in office has been hit by controversy from the get-go. The opposition DA has called for parliament to appoint a committee to probe her fitness to hold office.

Besides some controversial rulings – at least two of which have been set aside on review – Mkhwebane has been accused of being embroiled in a vendetta against Ramaphosa on behalf of a faction in the ANC. She has denied all accusations and her allies insist that she is acting impartially and independently.

Mkhwebane ended the press conference on Friday with two quotes, one from the Bible, and one from former President Nelson Mandela at the Rivonia Trial.

“I have cherished the ideal of a democratic and free society in which all persons live together in harmony and with equal opportunities. It is an ideal which I hope to live for and to achieve. But if needs be, it is an ideal for which I am prepared to die,” read Mkhwebane – Additional Reporting by Daily Maverick Reporter. DM