Holding Sudan back from civil war 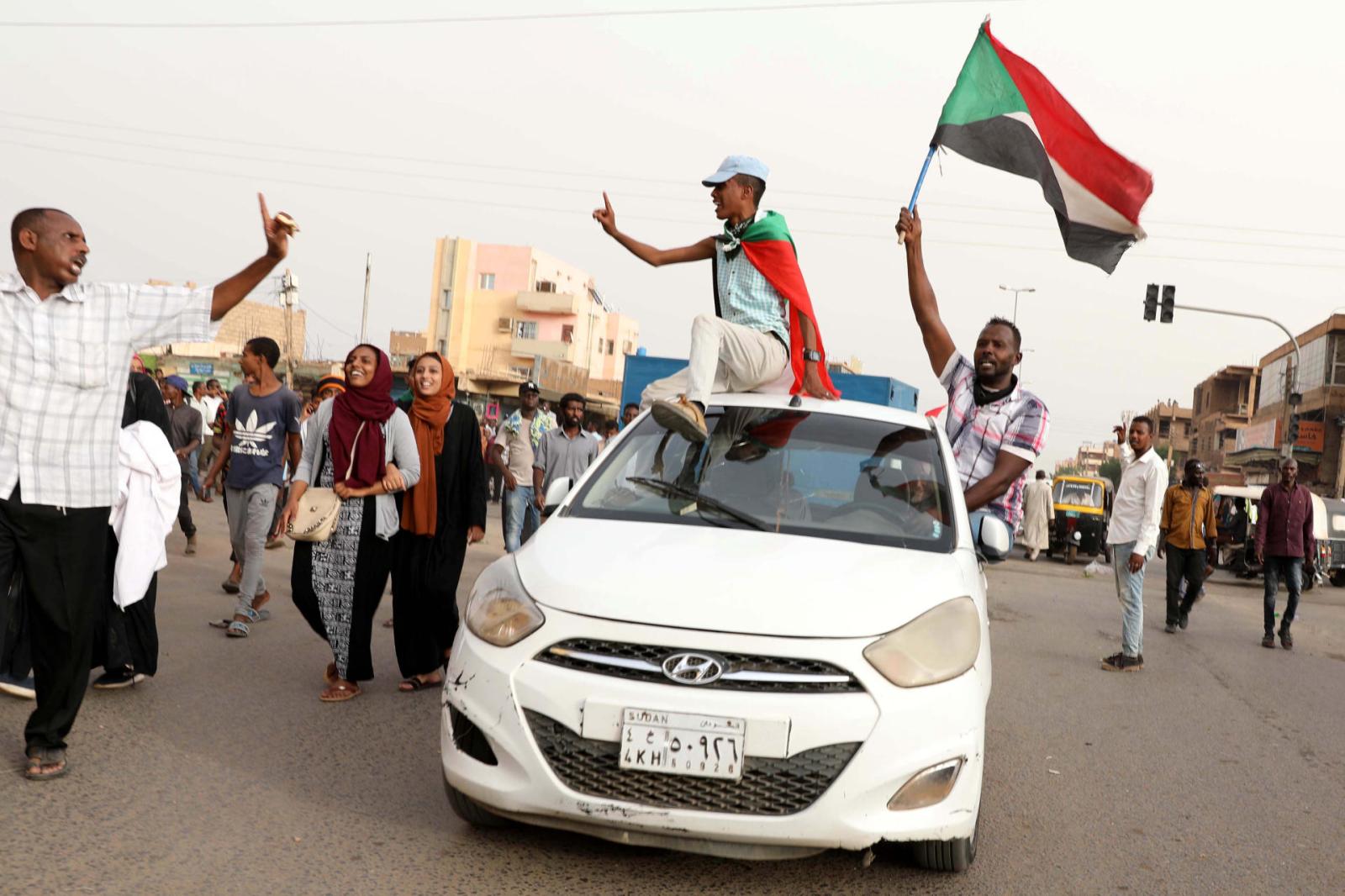 Sudanese protesters shout slogans during a protest against the ruling military council in Khartoum, Sudan, 30 June 2019. According to media reports, Sudan's security forces shoot tear gas on protesters killing at least one and others injured during a mass protest in Khartoum and other cities against the rule of the Transitional Military Council (TMC). The TMC announced that the protest leaders have 'complete responsibility' for any violence or damages. The protesters are calling for a civilian administration following the ousting of Omar al-Bashir as Sudan's president in April. EPA-EFE/MARWAN ALI

The African Union’s suspension of Sudan is significant, but can it resolve the dispute between the army and protesters? By Andrews Atta-Asamoah

After militias killed up to 100 peaceful protesters in Khartoum on 3 June 2019, the African Union’s Peace and Security Council (AU PSC) took swift action, suspending Sudan’s membership of the continental body three days later. The suspension sends a strong message, but must be followed by unified, dedicated and well-resourced mediation by the AU in order to prevent a slide into civil war.

The Transitional Military Council’s move to unilaterally end talks with the civilian opposition, which contributed to the suspension, effectively keeps the military council in power until elections in nine months. The Lomé Declaration on unconstitutional changes of government also played a role in PSC’s decision.

But possibly the key factor behind the PSC’s strong stand was the international backlash against the atrocities committed by the Rapid Support Forces militias (also accused of brutality in Darfur). The pressure on the PSC to act against the military council’s impunity was palpable.

On 4 June, China and Russia had blocked a United Nations (UN) Security Council position condemning the Transitional Military Council’s action in Sudan. This meant a strong AU position would be especially useful in subsequent UN discussions about the country.

The military junta had also disregarded the AU’s 60-day deadline to hand power to a civilian authority by announcing it would stay on until the elections in nine months. Also crucial was the alleged role of external actors, particularly the United Arab Emirates, Saudi Arabia and Egypt, in influencing the military council’s choices.

A tough decision was needed both to provide a framework for global action at the UN level and to safeguard the AU’s role as the primary custodian of continental norms and frameworks.

Before this, the PSC had succumbed to Egyptian sway by allowing the recommendations of the 23 April meeting of Regional Partners of The Sudan, convened by the AU chairperson in Cairo, to influence the PSC’s decision to extend the military council’s 15-day deadline to 60 days. Many say the extension bought time for the military council to consolidate its hold on power with external actors’ support.

Even though the decision to suspend Sudan, in this context, should have been straightforward, not all states backed this approach. Some wanted the PSC to give the military council more time to address the situation. In the end, the suspension was widely supported.

It comes at a time when the drastic turn of events in Sudan points to a treacherous way ahead. The repressive actions of the Rapid Support Forces component of the military council show that former president Omar al-Bashir’s “deep state” structures still oppose the protesters in favour of preserving the status quo.

Sudan’s post-Bashir dynamics have entered a second phase in which the army is working to stay in charge and is ready to use force to curtail civilian demands to hand over power. As a result of these major changes, the rare opportunity for change in Sudan risks being missed, unless the civilian front adopts a different approach in its dealings with the military.

There are now three possible outcomes: a negotiated deal where the military shares equal representation with civilians in the Supreme Council; a deal that grants dominance of the Supreme Council to the army; or a Supreme Council which might have civilian majority but wields no real power, outside the army. The last option would set any civilian leadership up for failure and create the circumstances for a military takeover in the long run.

Uncertainty surrounding the entrenched dispute between the army and the protesters raises the risk of civil war. Discontent with al-Bashir before he was ousted united many Sudanese, but couldn’t resolve fractures in the army, deep divisions between Khartoum and the peripheral areas, and differing interests among Sudan’s many civilian groups.

The Rapid Support Forces has since risen to contest the army’s control of the security space. In addition to the numerous militias operating from the peripheral states of the country, the control of those using force in Sudan remains fragmented.

The civilian front also comprises different interest groups, beyond the factions that constitute the Declaration of Freedom and Change. While some prefer a softer approach to dealing with the army, the Islamists, for instance, want Islamic laws to guide new legislation. Compounding these divisions are emerging perceptions that groups in outlying states are being marginalised by leaders of the Declaration of Freedom and Change.

The Transitional Military Council’s use of force against civilians could lead to the militarisation of civilians. Ordinary citizens could either take steps to protect themselves or look to involving militias operating outside Khartoum. An outbreak of war in the capital could lead to a free-for-all that would be difficult to contain.

As significant as the AU’s suspension of Sudan may be, it doesn’t provide a direct solution to the many rapidly changing fault lines that threaten to further destabilise the country.

The collapse of talks between the military council and civilian Declaration of Freedom and Change over the composition and control of the Sovereign Council, shows that progress cannot be left to the two sides. Robust facilitation and mediation is essential, at least while the Gulf countries are involved on the military council’s side, and the military is reportedly lobbying for international support.

Ongoing AU-Ethiopia efforts to re-start negotiations have significantly contained the escalation of tensions. However, the initial proposals tabled by the AU and Ethiopia show a worrying lack of consensus by the many actors involved in mediation. Unified, dedicated and well-resourced negotiations are needed to bring peace to Sudan. DM

This article was first published by the ISS Peace and Security Council Report.