Coal hunters dodge the trains to scavenge for fallen ro...

Coal hunters dodge the trains to scavenge for fallen rocks

Coal hunters dodge the trains to scavenge for fallen rocks

Unemployed youths collect coal along the railway lines and sell it for R50 a bag. Photo: Kimberly Mutandiro

People hunt for coal that has fallen off trains along the Brakpan-Springs line. By Kimberly Mutandiro

Hunting for coal that has fallen off freight trains has become a living for some people. Every day, more than a dozen women and unemployed young men sneak through the fences to enter the railway line from Brakpan to Springs. They dodge trains as they scour the tracks for any rocks or traces of coal.

The women use the coal in their homes, while the unemployed young men mostly sell the coal to put a few rand in their pockets.

Train drivers hoot when they see them on the line, and the coal hunters scatter until the train has passed. Sometimes metro security guards chase them away, but they keep returning.

“What can we do when we have no money to buy coal?” asks Elizabeth Sibanyoni. She has been coal hunting along the line for about a year, after hearing she could get coal here for free.

“A bag of coal costs R50 and that is too much money. This is a way of getting it free.” 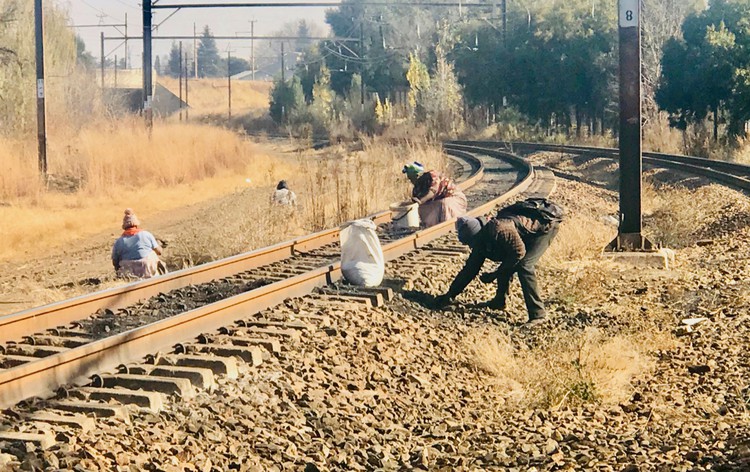 People scour the gravel along the railway lines for any bit of coal they can find. Photo: Kimberly Mutandiro

Sibanyoni lives at Mugongo informal settlement about seven kilometres away. She works as a childminder in Brenthurst, Brakpan, once a week and earns R1,000 per month. She is single and has three children of her own. She says she has been looking for a full-time job for over five years, without luck.

Two to three times a week she collects the coal in a 10-litre plastic bucket. Sometimes she finds enough to fill the bucket. When there aren’t enough coal rocks, she collects dust and any bit of coal she can find. She moulds the dust into bigger pieces using water and then dries the pieces in the sun.

“The sound of the train siren terrifies me. I run as quickly as my painful legs can carry me,” says Sibanyoni.

Lydia Chauke, who is from Mozambique and has been living in South Africa for 15 years, comes to the railway line when her husband is at work, to find coal to prepare supper for the family.

She lives five kilometres away in Mkhandla informal settlement with her husband and five children.

“My husband is a forklift driver at a firm in Brakpan and earns little … Picking up coal helps us save some money,” she says.

She also washes clothes for people, going door to door looking for customers.

Friends Sibusiso Ngwenya and Vhakhele Musina, both in their early 20s, meet every morning at the railway lines to gather coal to sell. They have been doing this for the past six months.

“The earlier we come, the more chances we have of getting more coal, because most people come a bit later,” says Ngwenya, who lives at a men’s hostel in Kwathema.

“We fill up two to three 20kg bags and sell them for R50 each,” says Musina, who lives four kilometres away in Reedsville township.

Ngwenya and Musina both have matric. They say they have been dropping off their CVs at various firms looking for employment, but without luck.