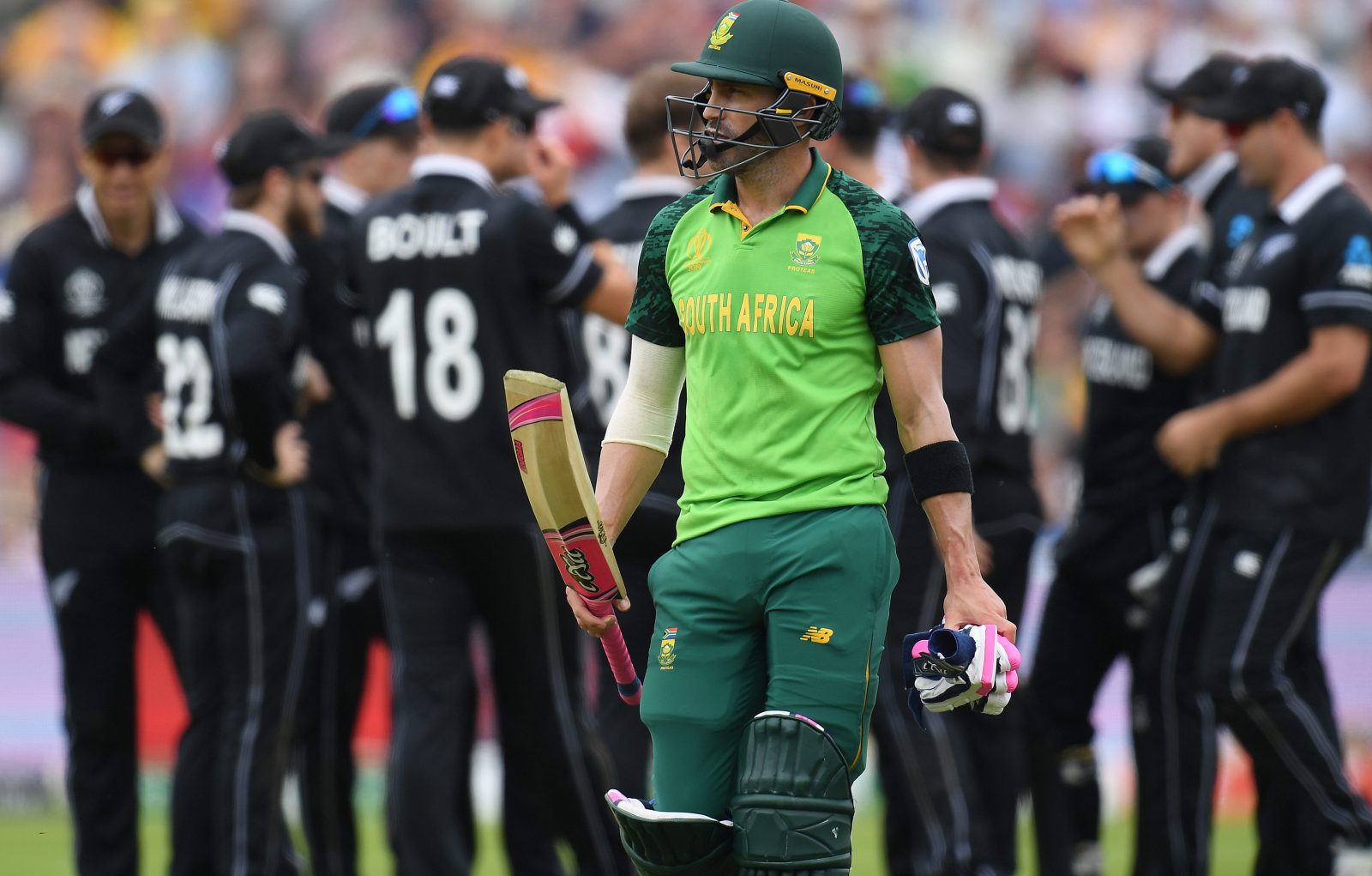 Faf du Plessis of South Africa walks off the field after being bowled by Lockie Ferguson of New Zealand during the Group Stage match of the ICC Cricket World Cup 2019 between New Zealand and South Afica at Edgbaston on June 19, 2019 in Birmingham, England. (Photo by Clive Mason/Getty Images)

South Africa’s cricket players and fans will move on from the disappointment of the 2019 ICC Cricket World Cup. South African cricket might not.

Spare a thought for Faf du Plessis. South Africa’s national cricket captain has been on a two-week walk of shame, trying – along with his brow-beaten teammates – to explain where and how and why the wheels fell off their 2019 ICC Cricket World Cup campaign, so quickly and so dispiritingly.

As Du Plessis told the media this week: “It’s been a remarkable tournament where different teams on their day can beat anyone, and it shows you that if you are not on top of your game, in international cricket… the margins are so small. We haven’t been great this tournament, but we certainly haven’t been that far off the ball.”

He’s right, of course. In the pressure of a World Cup, those small margins magnify into big issues. That’s why so much was made of the AB de Villiers’ “disruptive” offer to come out of retirement and rejoin the Proteas squad. It’s why, as Du Plessis admitted last week, the team management tried to convince strike bowler Kagiso Rabada not to play in the IPL (where, inevitably, he injured his back).

It’s why so many little things – a poorly-chosen shot here, a fumbled catch there – get blown up and singled out as The Reason why the Proteas are out of the tournament.

The point, though, is that the Proteas are out – and it’s been a pretty forgettable campaign all round for them. The focus now turns to the next big project: the 2020 T20 World Cup.

The country’s first-class cricket competition (that’s the four-day games, which prepare players for Test match cricket) didn’t have a sponsor this season. Neither did the domestic T20 competition, which was nearly cancelled due to rising costs and lack of interest.

To say the players are not on board with this is an understatement: just a day before the Proteas’ 2019 ICC Cricket World Cup opening match against England, the SA Cricketers Association (which represents over 300 players, including the Proteas) took Cricket South Africa to the Johannesburg High Court, insisting that it “show cause why its decision to restructure domestic cricket in South Africa should not be reviewed and set aside”.

That puts AB de Villiers’ late offer to come out of retirement into some perspective. After all, what’s more disruptive to team morale: having your old captain and star batsman asking to rejoin the team, or having your union take your employer to court to contest a restructuring process that you weren’t consulted about?

It also makes Rabada’s decision to play in the IPL more understandable. Why would you turn down a lucrative offer to play T20 cricket in India, when the alternative is staying in South Africa and playing in tournaments that don’t have sponsors, for a franchise team that won’t exist next season?

And it all shines a new – and perhaps more sympathetic – light on the team’s performances at the 2019 ICC Cricket World Cup. Faf du Plessis and the rest of the squad have had to answer some tough questions about their batting, bowling and fielding.

You can bet they have a few unanswered questions of their own about the state of cricket in South Africa. DM