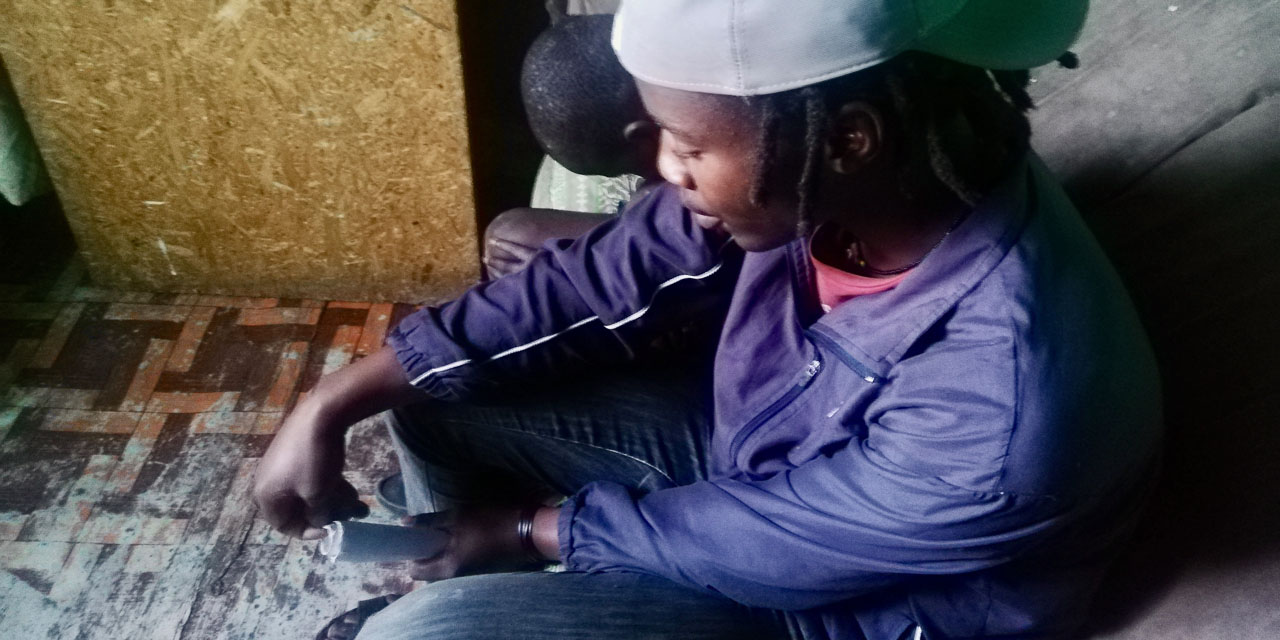 Siyanda Nyovane sits beside his brother in their two-roomed shack holding the letter from social development that would separate them. Photo: Ella Ndongeni

Siyanda Nyovane is head of his household and lives in a shack. The 19-year-old has kept himself and his younger brother in school for years. By Ella Ndongeni

Siyanda Nyovane may only be 19 and finishing matric at Intsebenziswano High School, but for years he has been the head of the household, looking after his mother and younger brother.

Last week, their mother died at the Mitchell’s Plain Hospital. She had been ill for a long time and had sometimes stayed away from home for long periods at a time. Long before she died, Nyovane was in charge of the home, a two-roomed shack in Nkelekethe informal settlement, Philippi.

Their older brother died six years ago, aged 17, while involved in a gang war. Nyovane’s younger brother is 12.

Their main source of income was their mother’s disability grant of R1,780, obtained with the help of a social worker in March. They do not receive a child grant for the younger brother.

When his mother was still alive, she needed Nyovane full time. She spent her last year bedridden. Nyovane was responsible for bathing her and changing her adult nappies.

“My day starts at five in the morning,” he says. “I have to make sure that by the time I go to school there is food cooked to eat in the morning.

“I do the groceries and attend my brother’s school meetings. I barely have time for myself or to be with people my age,” said Nyovane.

The shack is cold and they have only three thin blankets. One side of the shack is closed off with a ceiling board because the roof is damaged and rain comes in. The floor is damp. The window can barely close and they use some of their clothing at night to try and block the wind.

There is a bed, a wall unit in which they store clothes, a couch, and a small cupboard. There is a TV, but it’s broken. In any event, they have no electricity. “It is just there as a decoration,” said Nyovane.

“It’s been difficult staying in school under the circumstances. I am constantly thinking about the situation that is happening at home. I can’t study well because of all I have to do, and if I wait till late, then it’s dark because we do not have electricity and use paraffin light,” said Nyovane.

His mother used to sell clothes at Nyanga junction train station. They were discarded clothes which she’d collect. If any fitted her sons they’d keep them; the rest she sold.

The brothers say the last time they had new clothes was two years ago for Christmas. The only pair of socks Nyovane had, which he would wear for school, went with his mother to hospital.

He said his brother did not want to leave, “and I also do not want him to leave. All we know is each other and I can’t have him staying in a place that we do not know, alone,” Nyovane said.

“We do not know what we are going to do now. All I know is that we cannot afford to make a funeral for her. We have no money to do that, and what will happen now that she has passed away because we were dependent on that [grant] money,” said Nyovane.

The brothers have different fathers, both of whom have hardly been present in their lives. Nyovane has not seen his father since 2017. His brother’s father is unemployed and they do not know where he lives. When they have seen him on the streets they have asked him for help. The most he has given them, they say, is R20.

Nyovane only knows of one other relative, an uncle, who lives in Khayelitsha, but they have not had contact for over a year.

“I would love to go and study teaching after school but looking at the situation now it does not seem possible,” says Nyovane.

GroundUp’s repeated attempts to get comment from the Department of Social Development have been unsuccessful. DM