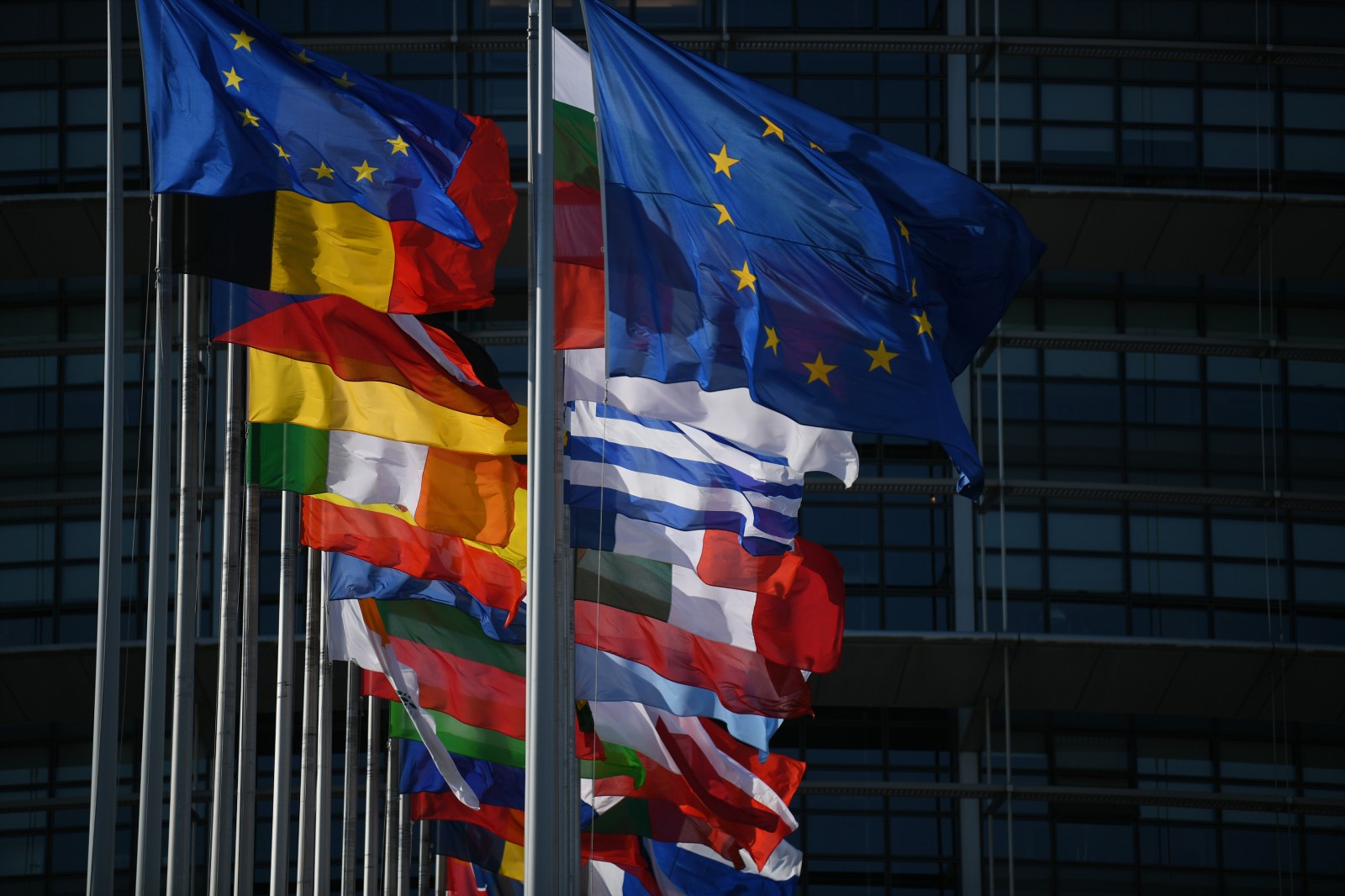 European countries' flags and the European Union flag fly in front of the 'Louise Weiss Building', the seat of the European Parliament, in Strasbourg, France, 02 July 2019. EPA-EFE/PATRICK SEEGER

The weakening of the centre in the European Parliament makes it more democratic – but also makes European politics less manageable. One result has been the unusually protracted negotiations we are now witnessing, to choose the European Union’s chief executive, the President of the European Commission.

Big losses by the two main coalitions in the May 2019 European Parliament elections are what set the scene for the bitter and unprecedented horse-trading among EU leaders that has been dragging on for weeks to try to agree on a new head of the EU Commission and other top posts.

After a first failure to reach an agreement at a summit on 21 June, the EU heads met again on Sunday for what turned out to be a marathon session that went through the night. At about midday on Monday EU Council President Donald Tusk, suspended the meeting – so leaders could get some sleep – until Tuesday.

But there was no telling if sleeping on the problem would resolve it as the differences were evidently very sharp. Many reasons were offered including both ideological and personal.

At the root of the problem, however, is that the two main political groupings – or “families” as some call them – lost their combined majority in the May elections.

The election results surprised many because pro-Europe parties did better than expected. Despite fears of a right-wing, ultra-nationalist, Eurosceptic landslide – fuelled by immigration and other controversies – the Europhile parties won 504 seats, a plus-two-thirds majority in the 751-seat house, as EU ambassador to South Africa Marcus Cornaro has pointed out.

The right-wing Eurosceptic parties combined gained only four seats for a total of about a quarter of all seats. And if, as expected, Britain leaves the EU later in 2019, this bloc will have even fewer seats as Nigel Farage’s Brexit party, which won more seats than any other British party, will depart.

Tusk has attributed the relative success of the pro-Europe parties precisely to Brexit because he says voters from other EU states were able to see for themselves the mess that leaving the union can cause.

Cornaro believes the encouraging performance by the Europhiles is also in part the result of a massive campaign undertaken by the EU – under the banner “This Time I Vote” – to persuade especially younger Europeans to vote. This boosted the turnout from 42.6% in 2014 to an “impressive” 51%, he says.

He believes the votes for the right-wing Eurosceptic parties came mainly from newer EU members most recently liberated from Soviet Union control who had not yet created a sufficiently confident national identity to be able to share sovereignty with the rest of the EU.

He also noted that the far-right was divided on the central question of Russian support. Russian President Vladimir Putin – who at this weekend’s G20 summit declared that liberalism was dying and nationalism was rising – has supported some European far-right parties, such as Marine Le Pen’s National Rally in France and Italy’s M5S/League coalition.

But Cornaro said right-wing governing parties from former Soviet Union states were opposed to Russian support. This major difference had prevented the far-right parties establishing a full platform and caucus in the European Parliament that would give them influential positions as heads of committees.

The logistical and political problem behind the apparently comforting election result for the European Union project stems, however, from the decline of both the mainstream centre-right and centre-left groups. In the previous European Parliament, they had together commanded a comfortable majority.

The biggest one, the centre-right European Peoples Party (EPP), had won 216 seats while the main centre-left Socialists and Democrats family had taken 185 seats. Together they had totalled 401 seats.

In the 2014 elections, for the first time, the different groupings had appointed “spitzenkandidate” (top candidates) who campaigned for Parliament as candidates for the position of the EU Commissioner.

This was supposed to enhance the voice of the European electorate, as the spitzenkandidaat of the winning political grouping would get “first serve” in the contest for the EU Commission presidency, Cornaro notes.

It has also been noted that the incumbent, former Luxembourg Prime Minister Jean-Claude Juncker, would not have got the job without the spitzenkandidaat system.

Since the EPP won the most seats in 2014, Juncker, its spitzenkandidaat, was eventually chosen by a large majority of the European Council (the leaders of the member states) as presidential candidate and confirmed by the European Parliament.

Juncker’s candidature was supported by the S&D group in exchange for other posts and policy concessions, including the relaxation of conservative austerity measures.

The two groups formed a grand coalition which, in an informal alliance with Juncker, had run commission affairs over the last five years without much consultation with opposition parties, an EU insider observed.

The loss of the combined EPP/S&D majority in the 2019 elections disrupted such cosy arrangements, bringing new parties and candidates into the field and highly complicating deal-making.

The EPP lost 36 seats, to remain with 180, much reduced, though still the largest single group. The S&D lost 39 seats, to be left with just 146. Together they now command just 326 seats, 50 short of a majority.

That has meant that the EPP and S&D need a third or even a fourth grouping to form a majority, as Cornaro points out. That is likely to come from the next-biggest group, ALDE&R, the liberal grouping which gained 40 seats in the 2019 election – a massive 58% – to reach 109. If it came on board, the three groups would attain a comfortable majority with a total of 435 seats.

Or the two could join the Greens which gained 17 seats to reach 69. The three together would then hold 395 seats, a majority of 19. For greater comfort, all four groups could combine, creating a powerful bloc of 504 seats, representing just over two-thirds of parliamentary seats and a majority of 128.

Cornaro noted that although the Greens were among the big winners, they lacked any champions in governing national parties. The liberals, on the other hands, had a few, most notably French President Emmanuel Macron.

He also notes that with the Greens and the liberals bound to be more assertive in the new Parliament, Parliament itself would be more assertive and so the interests of voters will be better represented. That would boost the legitimacy of the EU itself.

However, and probably inevitably, the weakening of the two big alliances and the introduction of new political parties into the mix has also complicated the task of choosing the EU Commission President.

German Chancellor Angela Merkel’s CDU is the leading party of the centre-right EPP group. So she started out backing the EPP’s spitzenkandidaat, Manfred Weber, a member of the CDU’s Bavarian sister party, the CSU. However, it seems she has conceded during the lengthy negotiations over the last several hours that the S&D spitzenkandidaat, Frans Timmerman, enjoys wider support and so has shifted her weight behind him.

EU insiders had long noted that Weber was not a strong candidate, mainly because he lacked any experience in a senior government position, versus Timmerman, a first vice president of the Commission, a Commissioner and a former Dutch foreign minister.

Despite Merkel’s apparent shift, Timmerman faces strong opposition from some right-wing member states, notably Hungary and Poland. This seems to have been the main obstacle to the summit reaching agreement on a new EU Commission President so far. DM