Zimbabwe takes a big gamble in its bid to dump the gree... 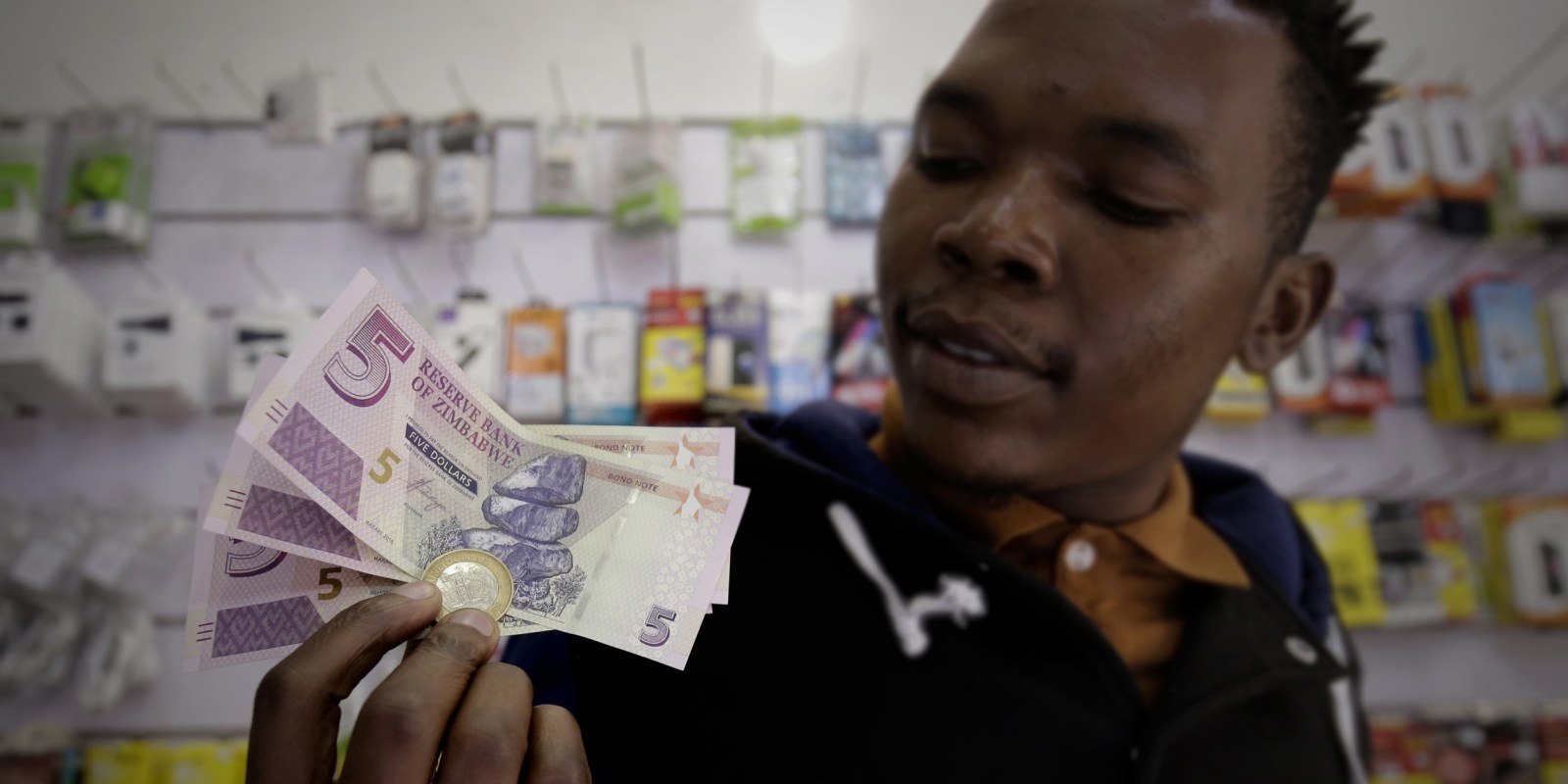 A shop assistant holds the Zimbabwe dollar bond notes and coin in Harare on 25 June 2019. The local dollar is now the only legal tender. (Photo: EPA-EFE / Aaron Ufumeli)

Zimbabwe last week made its interim currency, the RTGS dollar, the country’s sole legal tender, drawing the curtains on a decade of US dollar dominance. Harare was forced to abandon its own dollar in 2009 and adopt the greenback as its de facto medium of exchange in the face of hyperinflation and economic meltdown. Against this backdrop, what could possibly go wrong?

It is probably no coincidence that Zimbabwean President Emmerson Mnangagwa reportedly said last week that his government wanted to sell its ivory and rhino horn stockpiles, with a price tag of $600-million. As his government brushes aside the US dollar for everyday transactions in favour of a curious currency called the RTGS – Real Gross Time Settlement – dollar, it will need as much of the former as it can lay its hands on.

For the past decade, Zimbabwe has shared, with Ecuador and Timor-Leste, the dubious distinction of being a country without its own currency, one forced to use the US dollar. This prevents a central bank from hitting the press button on the printing presses and provides the economy with a currency that people actually have faith in. “In God We Trust” is the motto on US dollar notes. In a dollarised economy, “In The Dollar We Trust” could well be the motto.

Zimbabwe was forced to ditch its own dollar in 2009 in favour of the greenback because no one trusted the former. Zimbabwe $100-trillion notes were printed as hyperinflation ravaged the land, decimating savings and salaries as former president Robert Mugabe’s policies reduced a once thriving economy to rubble. Adopting the US dollar was hardly a panacea – and was clearly a sign that things had spun horribly out of control – but it prevented a complete meltdown that would have probably emptied the country, leaving it with more elephants than people. At least there would have been lots of ivory to go around.

A decade later, the government is trying to roll back dollarisation, leaving the many Zimbabweans of religious faith with only God to trust in.

“They are trying to force people to use a currency that they don’t want to use,” Zimbabwean economist Tony Hawkins told Business Maverick.

“Basically, the government is caught between a rock and a hard place. The rock on the one side is re-dollarisation which they are trying to avoid, and the hard place on the other side is hyperinflation. And the best way to avoid hyperinflation is with a stable exchange rate and this is a gamble to try and achieve that.”

Mnangagwa, who came to power in late 2017 during a coup that overthrew Mugabe, has been known to take gambles. And the stakes involved in this roll of the dice are extremely high. Mnangagwa has said that Zimbabwe must bring back its own currency by the end of 2019. The price has already been high. The central bank jacked interest rates to 50% from 15% in a bid to shore up the currency. Meanwhile, inflation has raced to a 10-year high of 98%, further sapping confidence in the currency as Zimbabweans recall the hyperinflation that forced the economy into the greenback’s embrace.

In May, Zimbabwe agreed to a staff-monitored programme with the International Monetary Fund (IMF), raising hopes that some sanity could be brought to economic policy.

The IMF has said Zimbabwe should allow a free float for the RTGS dollar, in which most Zimbabweans are paid. But economists and investors have expressed surprise at the speed with which Zimbabwe has rushed to make the currency the new reality, not least because many goods and services remain priced in greenbacks.

“It was always expected that they would go back to their own currency, but this is sooner than what people expected. Hopefully, the lessons learnt from the past are still fresh in their memory,” said a senior executive at a South African company that operates in Zimbabwe.

The reasons for the haste to de-dollarise are unclear – perhaps it is the ruling Zanu-PF’s own version of economic “shock treatment” to force the populace to accept it. But weaning an economy off the dollar is an arduous process and the omens are not good.

Even from that base, very few African economies that have been regarded as dollarised have successfully de-dollarised – Angola and São Tomé and Príncipe are the standouts in this regard.

“Countries … that eventually managed to reduce significantly the use of foreign currencies were successful in implementing a sustained process of disinflation and stabilisation, which, in the end, increases the attractiveness of using local currency,” the IMF paper noted.

“Experience also shows that dollarisation is often difficult to reverse. While the use of a foreign currency as a store of value or for domestic transactions has increased sharply in several countries over time, there are fewer cases in which this trend has been significantly reversed.

“Memories of macroeconomic instability and hyperinflation—the key factors that encourage dollarisation – do not wither away easily, encouraging economic agents to maintain foreign currency denominated assets even when macroeconomic conditions have stabilised and policy credibility has been established.”

None of this bodes well for Zimbabwe’s current attempt to cut its dollar dependence. Memories of the hyperinflation have not withered, and policy credibility, despite the IMF agreement, remains a long way off. Still, there are some encouraging signs. The interim currency has actually strengthened on the street in recent days, from as low as 13 to the dollar to as high as 7, according to one Zimbabwe-based journalist. But it is early days yet.

Other signs are more worrying. The IMF paper, looking not just at Africa but more broadly, asked:

“Why did some of these candidates de-dollarise while others did not?” Inflation appears to have been the key: “Six of the eight candidates that kept average inflation below 9% eventually de-dollarised, while seven out of the nine that did not, failed to de-dollarise.”

With inflation almost in the triple digits and the searing memory of Zimbabwean $100-trillion notes still fresh in the minds of many, Zimbabwe does not appear to be a good candidate at the moment. BM