PIC: The financing of a Black Capitalist Class 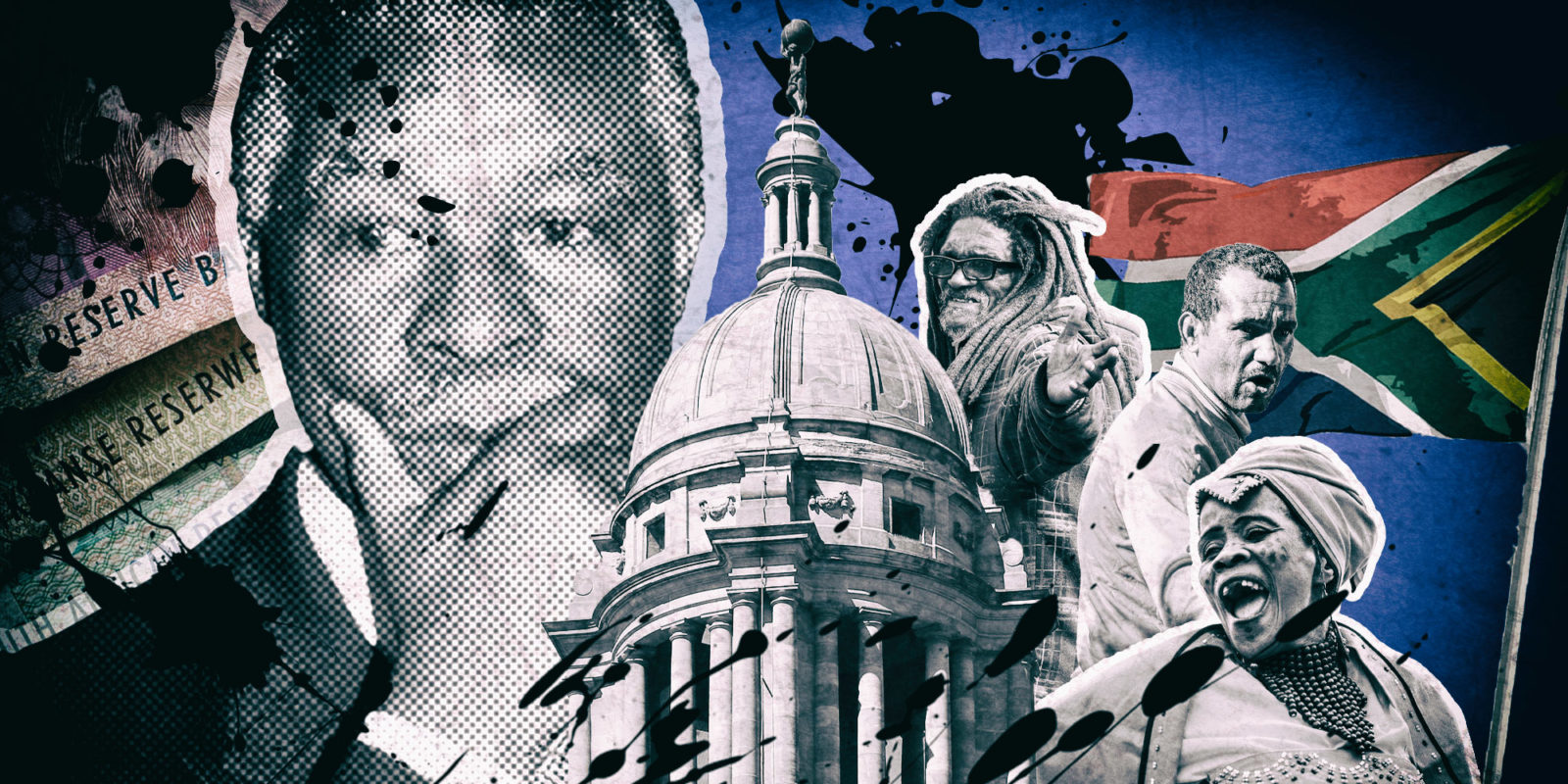 The PIC Commission of Inquiry allows for a reassessment of the role the GEPF and the PIC has played and is playing. Reforming the PIC will mean that it will no longer serve a narrow project but instead can lead to a genuine transformation that includes the majority of South Africans, unlike BEE, even when scandal free.

Since 1994, the government’s priority has been to develop what Thabo Mbeki called a black capitalist class (or black bourgeoisie) in order to “deracialise the ownership of productive property in our country” (Mbeki, 1999). This prioritisation meant the abandonment of the Reconstruction and Development Programme (RDP) and any possibility of being able to redistribute wealth to the majority of South Africans.

The black political elite who had gained power following the first democratic elections was the main beneficiary of such a shift. However, the would-be capitalists had to confront the reality that apartheid had left most of them poor. Their immediate challenge was therefore: How to become capitalists without capital? The development of this aspirant capitalist class therefore needed (1) a state-directed requirement for Black Economic Empowerment (BEE) and (2) the use of SOEs as a means of accessing capital.

In the 1990s context of neoliberalism being consolidated globally, the post-apartheid government adopted a conservative macro-economic framework. This framework resulted in the implementation of a number of policies. First, the South African government reduced capital controls and moved towards greater trade liberalisation, increased corporatisation and began to commodify public utilities. Furthermore it took over the shifts made by the apartheid government in the functioning of the government employees’ pension fund (GEPF) and its counterpart, the PIC, by shifting the pension funds towards a fully-funded scheme.

This shift was part of the negotiated settlement between the ANC and the outgoing apartheid government. The outgoing apartheid government required the pension fund for state employees to be large enough to meet the highly favourable pension guarantees of all senior state and public officials, such as MPs, judges, generals and director-generals1. In order to finance the shift, the ANC government had to continue pumping large amounts of public money into the pension fund. It did this by selling government bonds to the government-owned PIC, which, at the time, was a commission and not a corporation and, therefore, even more closely tied to the government.

The Government has to pay the PIC (i.e. itself) interest on these bonds, thereby artificially increasing its debt burden. Between 1989 and 1996, governments debt tripled from R80-billion to R300-billion, almost half of which was attributed to the growth in public pension fund assets, which increased by R105-billion over the same period.2 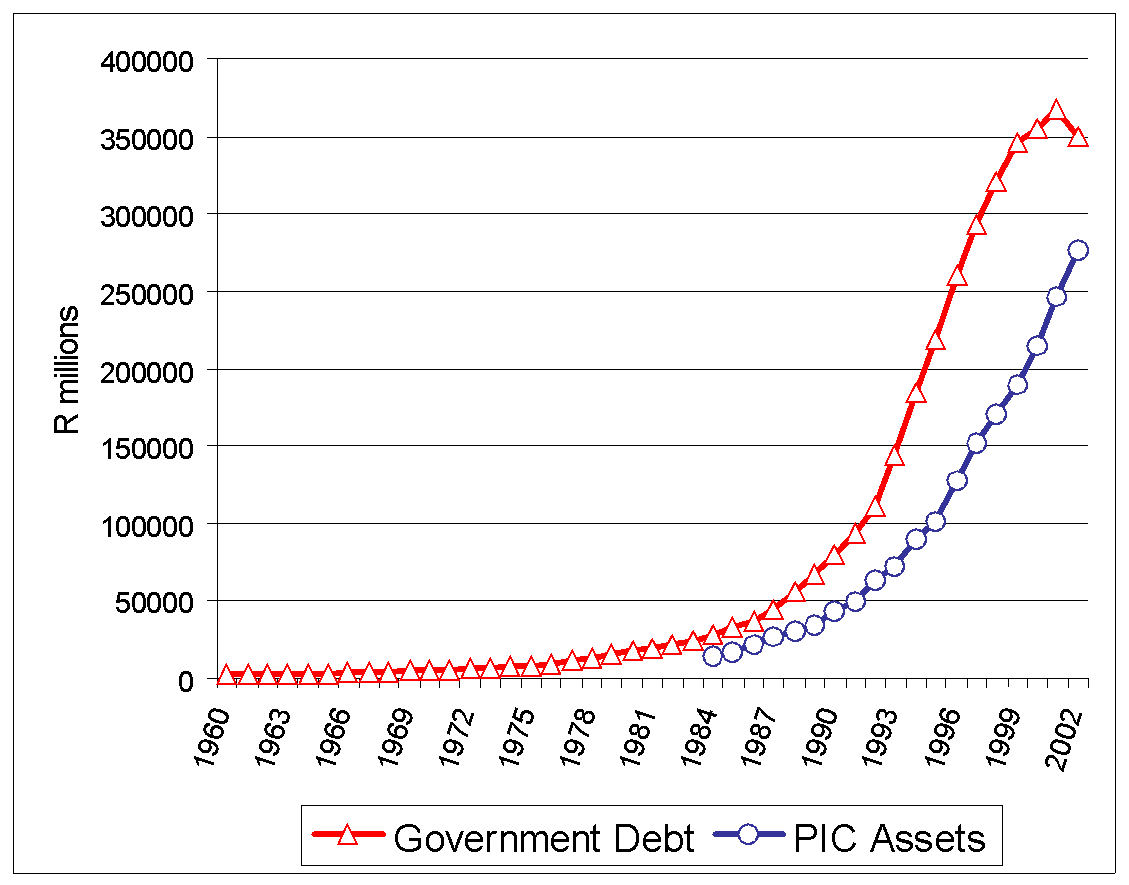 (Figure 1 shows that PIC assets did not grow appreciably until the late Eighties when the negotiation of apartheid’s end took place. At the same time a sudden and matching acceleration of public debt occurred.)3

As a result, public spending on social services and capital investment was restricted as illustrated in figure 2 below. 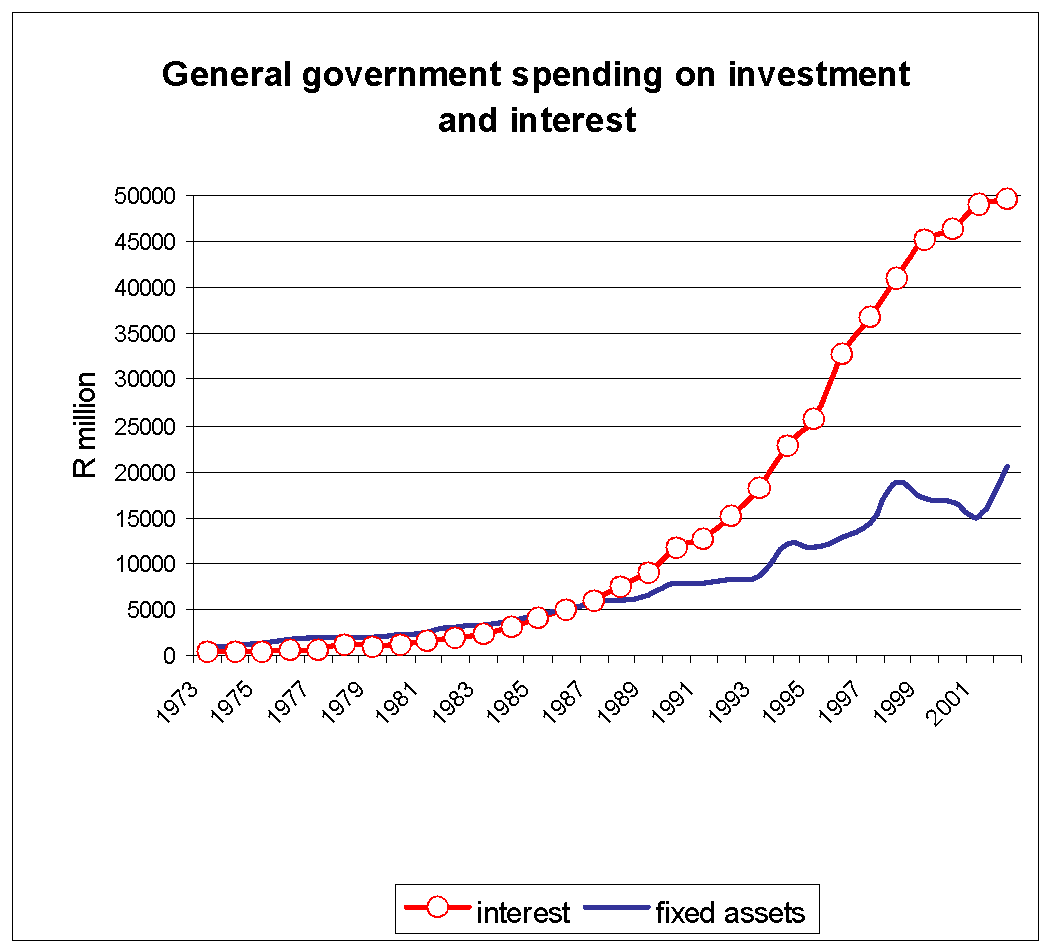 One of the major reasons given by the ANC for not following through with the more redistributive RDP was the government’s claim that it needs to repay the debt. However, a large proportion of the debt was the debt owed by the government to itself. Only part of the debt was linked to apartheid inherited debt, which the post-apartheid government was well placed to refuse to repay under the Doctrine of Odious Debt.

The GEPF, whose assets make up 87% of the PIC, is important for a second reason. In relation to the state being used as a means to accumulate wealth for an emerging capitalist class, the link between state-owned enterprises (SOEs), corruption and cronyism is often made, but one of the most obvious of instruments for this is the government-controlled PIC, the largest asset manager in Africa.

The fact that the PIC manages mostly workers’ money is ironic given the frequency with which it has acted against the interest of these workers. A well known example of this would be when the PIC, Headed by Brian Molefe, financed privatisation by enabling the black investor group – Elephant Consortium – to buy private equity from Telkom.

More recently, paralleling the State Capture Commission of Inquiry, the Public Investment Corporation Commission of Inquiry has brought PIC investments and management under scrutiny. This includes allegations against four of the PIC’s executive directors, one of whom was the Deputy Minister of Finance, Mondli Gungubele.

PIC: A site for cronyism and corruption?

The strategy of capital accumulation of the aspiring black elite through the use of the PIC took two main forms: illegal and corrupt deals along with BEE investment schemes.

Under Mbeki, we see that the early capture of capital by a tiny number of well-placed individuals took place. BEE was the main instrument used to legitimise the use of pensioners’ money to create this new black stratum within the capitalist class.

Under Zuma, corruption and cronyism has been the main source of capital accumulation for his favoured cronies (who duly became his support base in his battle with Ramaphosa). In the PIC this was facilitated through mutually beneficial relationships between those on the PIC governance structure and the corporations that the PIC invests in. An example of this would seem to be the funding of the Lebashe Investment Group. One of the non-executive directors of Lebashe is Jabu Moleketi, who, as the then Deputy Finance Minister, was also chair of the PIC.

Dr Dan Matijila, former CEO of the PIC, justified PIC’s investing in unlisted shares as fostering transformation and inclusive growth. Given the colour-coding of these terms, he is correct. Unsurprisingly, however, he says nothing about the corruption facilitated by unlisted shares. The calls by Abel Sithole, the GEPF’s current Principal Executive Officer, to double investment in unlisted shares should come with warning bells.

Notwithstanding, what could be Sithole’s reversal of these calls, an important measure to put an end to corruption in the PIC would be to support the demand by the GEPF to have unlisted investments suspended, at least until the end of the PIC Commission of Inquiry.

Corruption – a political and economic project

All of this makes it clear that the development of a black capitalist class and the parallel rise of corruption are closely intertwined. The material basis of the rise of corruption lies in the dilemma of a would-be capitalist class having no start-up capital but political power that gave them access to state resources. Related to this is Black Economic Empowerment (BEE), now seemingly being replaced by a “transformation”, being used to legalise and legitimise the predatory practices of the “black bourgeoisie”. The PIC has been involved in both cases.

The GEPF and the PIC needs to be reformed

The PIC Commission of Inquiry is critical in revealing corruption and mismanagement at the PIC. Naming and Shaming is an important short-term measure that hopefully results in punitive action being taken against the guilty parties. However, greater structural transformation is required in order to mitigate against similar corrupt practices in the future. Moreover, reforming the PIC in the following ways will mean that it will no longer serve a narrow project but instead can lead to a genuine transformation that includes the majority of South Africans, unlike BEE, even when scandal free.

These reforms include the following:

Converting back to a pay-as-you-go scheme would free up a huge amount of money for social investment and/or the creation of a sovereign wealth fund. Contrary to popular belief, this will not threaten the pensions of government employees in any way. Self-evident proof of this is that despite all PIC’s abuse and heavy speculative losses, which are now increasingly a matter of public record, the GEPF has not only met all its pension and related commitments but has in fact unilaterally increased payments to its beneficiaries.

The mandate of the PIC currently requires it to ensure both good returns on investment and to contribute positively to broader socio-economic development. Currently, these obligations have not been adequately met. The Alternative Information & Development Centre (AIDC) recommends amending the PIC’s mandate to include the explicit funding of long-term public investments to drive a new industrialisation programme. This will critically boost productivity growth instead of focusing on short-term financial returns gained on the JSE. To do so, the fund should partner with existing efficient developmental financial institutions such as the Industrial Development Corporation (IDC) and the Development Bank of Southern Africa (DBSA). Another main target of its funds should be government bonds and bonds in the crisis-ridden SOEs.

Great transparency and accountability entail public disclosure (with regular reports) of exactly (1) how the PIC is managed, and (2) to whom, how much and under what conditions all investments are made.

This change would additionally mean that the PIC can be used to demand greater transparency from corporations and their practices to ensure that corporations are also held to greater account. The practice of letting nominees hold the shares of the true beneficiaries should be forbidden in the Companies Act, as for example suggested by the investigative journalists of amaBhungane.

Finally, the inclusion of trade union representation on the PIC board is an important first step but much greater worker control over the asset manager is critical.

Strike while the iron is hot!

The PIC Commission of Inquiry allows for a reassessment of the role the GEPF and the PIC has played and is playing. Currently it serves the interests of a narrow class project. If we wipe out cronyism and corruption in the PIC, and transform the GEPF, it can be a critical instrument that can act as a catalyst for a much broader societal transformation. The time to strike is now. DM

This is an amended chapter from a soon-to-be-published Alternative Information & Development Centre (AIDC) booklet on the need to transform the GEPF and the PIC.

Twenty lessons in 20 years: Lesson One – Am I really an entrepreneur?