Now for the path to Society 5.0 — a human-centred, digitally driven economy 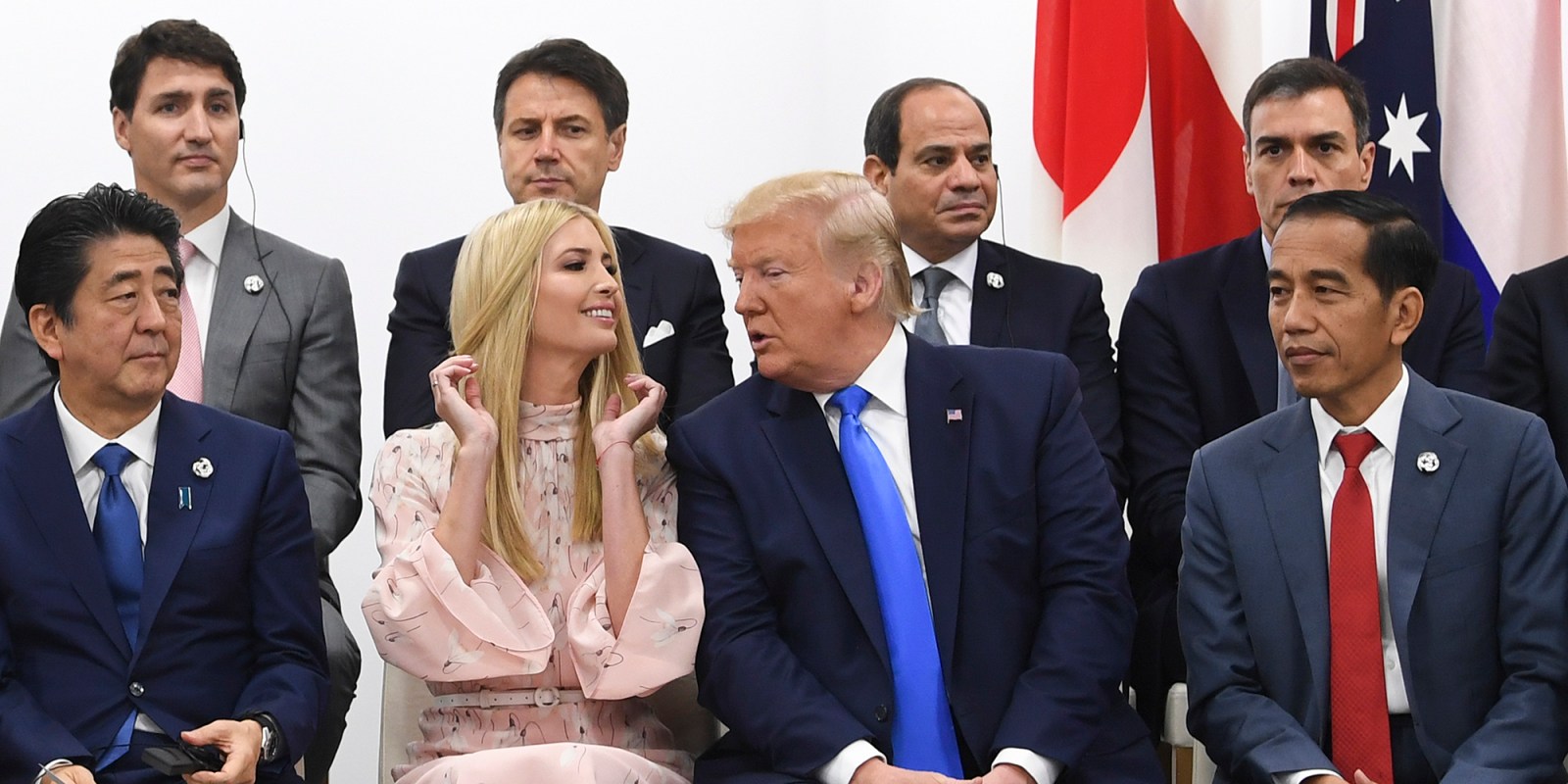 US President Donald Trump speaks to his daughter and Adviser to US President Ivanka Trump at the G20 summit in Osaka, Japan. Leaders from 19 countries and the European Union gathered to discuss topics such as the global economy, trade and investment, innovation and employment. (Photo: EPA-EFE / Lukas Coch)

US President Donald Trump’s backtracking on Chinese tariffs and reversing the ban on Huawei could be seen as steps in the right direction. But it will take a lot more than this to move towards Society 5.0, a vision of the future that hinges on digitisation, human-centred Artificial Intelligence and trusted sharing of data. It will require the free flow of data, agile regulation and an overhaul of the education system to get the lost generations digital-ready.

It was the best G20 outcome possible for financial markets: US President Donald Trump committed to holding off on imposing tariff increases on China and reversed the ban on Huawei.

But will his decisions hold and why is it even more important, as the G20 communique states, “to realise a free, fair, non-discriminatory, transparent, predictable and stable trade and investment environment, and to keep our markets open”?

Without this, the world will not only be geographically divided, but it will be digitally divided too — and leaders at the G20 meetings did agree that a digitally-led economy based on the free flow of data could pave the way to better, more inclusive growth.

Referred to as Society 5.0, this vision of the future hinges on digitisation, human-centred Artificial Intelligence and trusted sharing of data. The importance of the latter is highlighted in the formal G20 communique, which terms it Data Free Flow with Trust (DFFT). DFFT was introduced by Japanese Prime Minister Shinzo Abe in a speech at the World Economic Forum in Davos in January and underpins Japan’s important strategic imperative: To move towards a super-smart society it has termed Society 5.0.

Angelica Donati, a real estate entrepreneur who represented the construction industry at the G20 Young Entrepreneurs’ Alliance (G20YEA) in May, sums up Society 5.0 nicely:

“It is an ambitious plan for transformation which seeks to contrast the problems arising from the country’s ageing population, which are not unique to Japan, but indeed resound across most ‘old world’ economies, by creating a new social contract and economic model which incorporates the technological innovations of the fourth industrial revolution.”

She says it addresses the key pillars of infrastructure, finance tech, healthcare and logistics, and relies on AI and big data-driven deep tech to fuel it.

“Japan wants to create a ‘super-smart’ society, underpinned by the so-called SDGs (Sustainable Development Goals), the 2030 sustainability targets promoted by the United Nations.” So not only does it offer the real possibility of stronger economic growth, but it also does so responsibly, inclusively and sustainably.

In the lead-up to the main event, G20 leaders, digital ministers and young entrepreneurs grappled with the risks and possibilities presented by a digitally-led economy, with borderless data flows. They ended up agreeing that effective data — the foundation of any digital future — is vital as “an enabler of economic growth, development and social well-being”.

At the G20 gathering of digital ministers, it was agreed that emerging technologies, including blockchain, AI and fintech, would “empower all individuals and firms by creating new opportunities and generate new services and employment”.

Meanwhile, the G20YEA emphasised the need for a progressive policy environment, given that new technologies are evolving rapidly. Regulations would need to “manage and mitigate the risks relating to data circulation, privacy and cybersecurity, while being sure not to unnecessarily hinder digital businesses”.

There’s broad agreement that the regulatory environment will make or break this vision of technological transformation. To be supportive of innovation it needs to be agile and flexible, yet robust and sophisticated enough to ensure the protection of personal information and intellectual property.

That’s why you see the communique backing the Regulatory Sandbox Approach, which enables innovation in an environment where regulations are light-touch and ground-breaking fintech initiatives can be tested.

The success of Society 5.0 also hinges on educating, upskilling and reskilling what Japan describes as the lost generation of youth, but will also need to offer opportunities to the myriad others who will otherwise be left behind by a digitally-driven workforce.

The 2019 G20YEA communique sets out what young entrepreneurs believe is needed: The redesign of educational curricula to teach and encourage “the entrepreneurial skill sets that will be key in the creation of the so-called ‘Society 5.0’”.

It ends with: “Nobody should leave school not knowing how to write a business plan.”

If the world’s largest countries do manage to thrash out a workable and sustainable roadmap, it would make possible a more equal and thriving global eco-system. But that will rely heavily on a level of global commitment and collaboration that seems too optimistic, notwithstanding the well-intended support captured in the G20 communique.

This digital nirvana also seems a world away from recent events unfolding in the technology environment. The big four tech companies, Facebook, Amazon, Google and Apple are coming under regulatory scrutiny in the US; there are widespread concerns about Facebook’s planned digital currency initiative; and Huawei, which has become the temperature gauge for a digital, data-driven future based on trust, is hanging in the wind, dependent on Trump’s vagaries.

As always, the G20 communique doesn’t reflect the differences in opinion between countries on the issues it covers. But it is significant that there is a commitment to striving for Data Free Flow with Trust. It signals that G20 countries are willing to engage on how to move from widely divergent sovereign and regulatory approaches to data moving across borders to global regulatory collaboration that seeks to assure the safeguarding of personal data and intellectual property.

The alternative is a fractured, digitally divided world, in which data is protected behind sovereign regulatory walls and the pace of innovation in different countries varies markedly — a far cry from the promise of a technologically sophisticated Society 5.0. BM