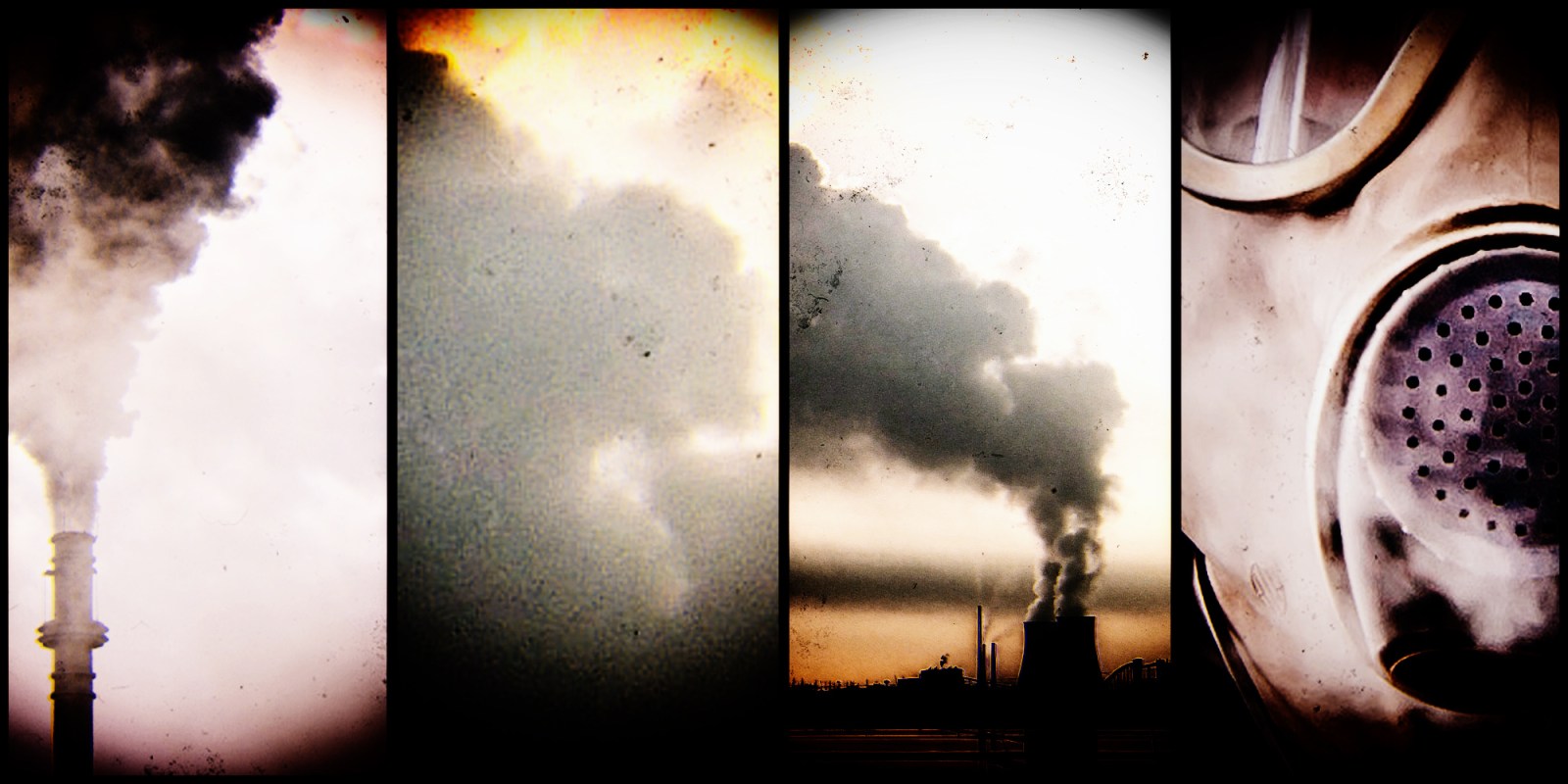 It’s essential that we revise our legislation and policies so that it speaks to the needs of the country and today’s realities, says the writer. (Image sources: Hassan Afridhi/Unsplash, Patrick Hendry / Unsplash, Yiran Ding / Unsplash)

The South Durban community share their neighbourhood with two of the country’s biggest oil refineries practically on residents’ doorsteps. With air pollution killing an estimated 20,000 South Africans every year, this is yet another case of profit prioritised over people.

Section 24 of the South African Constitution enshrines that ‘everyone has the right to an environment that is not harmful to their health or well-being and to have the environment protected for the benefit of present and future generations, through reasonable legislative and other measures that prevent pollution and ecological degradation and secure ecologically sustainable development and use of natural resources while promoting justifiable economic and social development’.

This is an underpinning statement of an individual’s environmental right. In South Durban, however, the enshrined environmental rights do not translate into reality for many in the surrounding community. This particular area in KwaZulu-Natal is one of the most heavily air-polluted areas in southern Africa (Nriagu et al, 1999; Matooane and Diab, 2002), and at the same time is still held by the ravages of apartheid that is deep-rooted in many of the social and environmental grievances experienced today.

The South Durban community share their neighbourhood with two of the country’s biggest oil refineries practically sitting on the residents’ doorsteps. These refineries have controversially been major sources of air pollution and the associated high levels of asthma, cancer, and leukaemia. With air pollution killing an estimated 20,000 South Africans every year, this is yet another case of profit prioritised over people.

Due to the tactics used by developers, the South Durban community is faced with similar environmental injustice in the current democratic era as what it experienced under apartheid.

However, it is also home to one of the largest home-based petrochemical and chemical industries in the country, responsible for calamitous air pollution. The oil refinery duo, Engen and SAPREF, are located at the core of this toxic district (Scott and Barnett, 2009). In addition, South Durban shares its community with the largest chemical industry cluster, including Mondi and Sappi paper mill. These industries combined contribute significantly to pollution in the area. Incorporated in this assortment is the transport infrastructure linked with Africa’s leading port, Durban, as well as the 300 smaller chemical industries and their 150 smokestacks that pump the lethal poison that’s contained in the dirty South Durban air.

The vulnerable residents of Merebank, Wentworth, Clairwood, Bluff, and Umlazi have been the victims of cumulative ambient SO² concentrations that are among the highest recorded levels in South Africa. According to Wiley (1996), a study by Dr Barry Kistnasamy pronounced that children from Settlers Primary School fence line to Engen were three times more likely to be at risk from respiratory illnesses than children attending school north of Durban.

Not only will this death trap add to past and continuing adverse environmental impacts emanating from industrial activities in South Durban, it will also result in these impacts being distributed in such a manner as to unfairly discriminate against the residents and children of South Durban, who are already vulnerable and disadvantaged persons.

This goes beyond air pollution and the grave health impacts suffered by the local residents. This ongoing situation also flies in the face of the greenhouse gas emissions reduction commitments made at the United Nations Climate Summits in 2011 in Durban, and 2015 in Paris to curb global warming. In the light of mounting evidence of the urgency and scale of the climate crisis, inaction by our South African government amounts to climate denialism. Then Finance Minister Pravin Gordhan (2016) pretentiously boasted that “South Africa’s retort to the global climate change crisis” not long after expressing his satisfaction that “work had begun on a new gas terminal and oil ship repair facilities at Durban”.

Sadly, these contradictions are still ingrained in our current political narrative. In his third State of the Nation Address on 20 June 2019, President Cyril Ramaphosa assured he had “heard the voices of the young people who marched to the Union Buildings [on 14 June], urging us to take action to protect our planet” under the banner of #YouthDemandClimateJustice; adding that we must “act now” to tackle the extreme weather conditions that “threaten our very existence”. He highlighted our “responsibility to pursue inclusive, sustainable development that is resilient in the face of climate change”, but in the same breath called for prioritising “the economic sectors that have the greatest potential for growth” including gas, chemicals and plastics, bolstering the mining industry, and boosting air travel to South Africa – all sectors that, if anything, have hefty environmental and carbon footprints.

This inconsistency and the failure to integrate climate change into economic development and employment strategies were further compounded by the claim that “sacrifices and trade-offs” are needed to achieve our developmental objectives. It suggests that job creation and economic growth justify unsustainable practices, regardless of the externalities.

So, what does this mean for the residents of sacrificial zones such as South Durban, who live in such a heavily contaminated area, where industries are escalating toxic emissions to meet the demands of the business as usual? South Durban is located on a flood plain with the majority of development in close proximity to the coastline, which has been experiencing climate change impacts since as early as 2008.

In June 2008, a storm flooded much of the South Durban basin, preventing the Wentworth and Bluff communities from accessing the main highway. A day prior to the United Nations Framework Convention on Climate Change (COP17) summit opening in November 2011, a heavy downpour of rain inflicted such disorder that many lost their lives when RDP houses caved in and collapsed.

In August 2012, the Durban port berths 203 to 205 awaiting extension were severely damaged as a result of heavy winds that caused a ship to collide against cranes, subsequently ensuring a two-week closure, and in our backyard, trucks leaving the Engen facility were found waterlogged.

In October 2017, an extreme storm left South Durban beleaguered, and an estimated 18 residents died. Gusts of wind were recorded at 180km/hour, which steered an MSC container ship into the mouth of the harbour. This storm will go down in the book of history for the microplastic nurdles that suffocated our entire coastline as a result.

Most recently, KwaZulu-Natal and South Durban residents felt the shock of the major storm that destroyed everything in its path in April 2019. This storm made waves when it broke October 2017’s rainfall record, with a whopping 165mm of rain recorded by the South African Weather Service. The destructive storm took close to 100 lives, washed away homes leaving over 1,000 displaced, and resulted in damage to infrastructure escalating the cost of repair to R658-million according to a report that was tabled at the eThekwini municipality’s executive committee on 3 May 2019. As a result, Premier Willies Mchunu declared the south coast of Durban a disaster area after the floods.

Serious emphasis needs to be placed on enacting meaningful and binding climate change laws that will prohibit the flimsy and flawed approach our country and elected leaders of the world currently have towards climate change. Effective climate change adaptation and resilience plans and strategies need to be fleshed out in order to prepare for extreme weather events and environmental and climate shocks such as these – events that we are often ill-prepared for.

This should be aligned with the need to consider more accurately the potential social, environmental, and economic costs of proposed industrial, infrastructure, or urban development projects.

Environment Impact Assessments are supposed to do just that, taking into account inter-related environmental, socio-economic, cultural, and human-health impacts, both beneficial and adverse. Yet back in 2012, Cornell University recommended that “there should be an attempt to rewrite existing assessment legislation”. South Africa has one of the most progressive constitutions and policies which read immaculate on paper, but our experiences on the ground prove a huge disconnect between policy and reality. In order to achieve climate justice, laws need to be rewritten by the experiences encountered on the ground together with enforcement of these laws. In reality and still today, the judge places an onus on the applicant – usually civil society – to prove that an activity is likely to cause a significant impact on the environment.

It’s essential that we revise our legislation and policies so that it speaks to the needs of the country and today’s realities. In this process, participation from the ground up is a constitutional requirement, and we need our recently elected Parliament and Provincial Legislatures to push for greater participation and transparency. DM