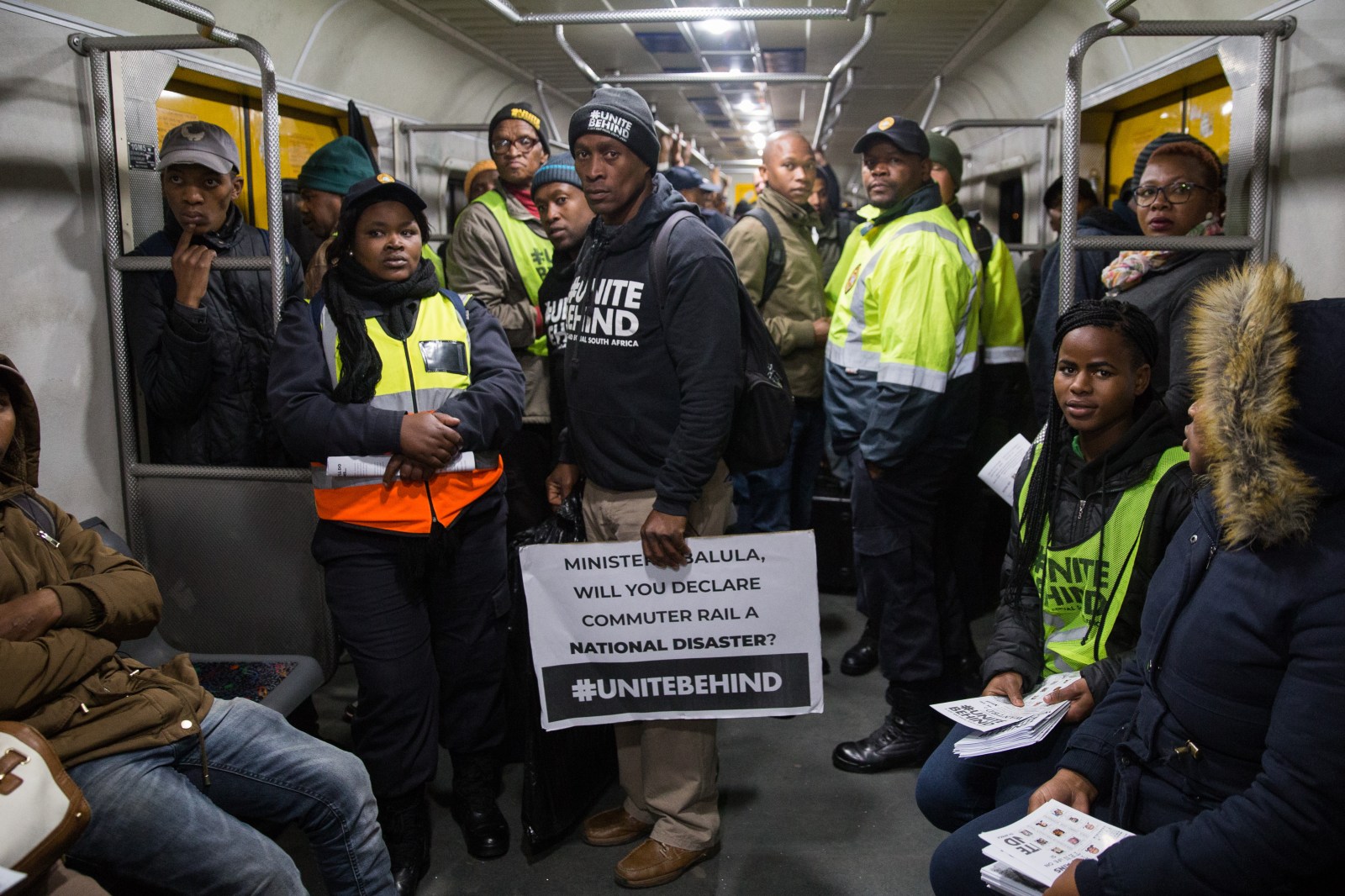 Civil society and commuter groups tell Fikile Mbalula their demands. He, in turn, waxes lyrical to Parliament about high-speed trains of the future. By Ashraf Hendricks for GroundUp

To see first-hand what commuters face in the Western Cape, Minister of Transport Fikile Mbalula planned to take a train from Khayelitsha to Langa on the morning of Tuesday, June 25. The trip did not go as planned. After a long delay and with further delays expected because of two deaths on the Central Line, Mbalula abandoned commuters and used his ministerial escort to get to Langa.

Here he engaged with the media and civil society organisations. Numerous organisations approached the minister.

The Western Cape government said it was “disappointed” he had not engaged with them.

Members of #UniteBehind doorstepped Mbalula as soon as he made his way on to the platform at Chris Hani station in Khayelitsha.

“Rail commuters have been let down by empty promises and an absence of clear plans to fix the broken rail system,” said the commuter activist group.

It added that deaths occurred due to “overcrowding, failing infrastructure and violent crime”. It said women were being harassed and sexually assaulted. Delays and cancellations were causing workers to lose jobs and learners to lose school time.

The organisation demanded that Mbalula:

#UniteBehind said that the minister had promised a meeting with them.

Chairperson of the UCV, Yvonne Dick, brought Mbalula’s attention to the long-distance Worcester Line. Dick said people travelling by train from Worcester are very poor, so alternative transport is not an option. A taxi from Belville to Worcester could cost R110 one-way, whereas the train was R23.

Dick said a train leaving Cape Town at 4.50pm sometimes only reached Worcester the next day after 3am, and then by 4.40am the same worker had to be back on the train to return to the city.

She said that there is no potable water on the train and only two toilets.

Among UVC’s demands are that the City of Cape Town create a by-law to stop the purchase of stolen cables; and that Passenger Rail Agency of SA (Prasa) officials and staff get better training on how to assist commuters.

Provincial secretary of the South African Transport and Allied Workers Union (Satawu) Tembela Dakuse expressed concern that only one person so far had been found accountable for the burning of trains.

Among Satawu’s demands are that workers, including security and cleaners, not be privatised. The union believes this will save money.

Satawu also demands the removal of Richard Walker, Western Cape regional head of Prasa, saying he is unable to deal with the parastatal’s structural problems.

Dakuse said trains in wealthier neighbourhoods had better security and services were more reliable. She said the “black and coloured working class in this province are paying the cost”.

The Western Cape provincial government issued a statement saying it was pleased with the minister’s investigation into the commuter rail service, but disappointed that “he did not seek to engage provincial leadership during his visit”.

In the statement, Premier Alan Winde said it was important that Mbalula experience the frustration of commuters; however, the minister would “go back to being driven in his ministerial vehicle” while commuters continued to face delays.

He said building partnerships across government was “essential to ensuring effective service delivery”.

Mbalula told Parliament during the State of the Nation (SONA) debate, on Tuesday, June 25: “I have set out a set of urgent interventions needed to return the Central Line service into an efficient, trusted and safe service.”

Echoing President Cyril Ramaphosa in SONA, Mbalula spent more words on a vision of high-speed trains connecting Gauteng to Cape Town and elsewhere than he did on his Metrorail experience earlier that morning.

“High-speed rail could be feasible – in this sixth administration, we shall commission a full feasibility study and financing models to achieve this collective dream.

“High-speed rail is an economic stimulant, it is a new cities and towns creator, it is an enabler and multiplier, it is an important tool towards a cleaner air strategy and indeed in speeding up our intended transitioning from road to rail and from air to rail … President, no South African should have a problem with an introduction of rail network to Musina and Buffalo City as you said in your address.

“Prasa will be back on track,” he told the joint sitting of Parliament in the National Assembly. DM