Naspers faces a pivotal moment; can it graduate from being a wild, somewhat haphazard, occasionally inspired tech investor to being a focused operator?

For such a huge company, Naspers has a peculiar problem similar to someone who just arrived at a new school from out to town. Who are they? Are they important? Who are their friends going to be? Should we just ignore them? Could they make the first team?

You could call it a self-recognition problem on steroids. Naspers is now SA’s largest company and not just by a little bit. Naspers is now the same size from a market capitalisation perspective to Anglo American, Standard Bank, Sasol, MTN and Vodacom combined. It’s been an amazing run.

Yet ask ordinary people in South Africans about Naspers, they would almost certainly regard it as a newspaper company, the now tiny portion of the company’s business which I suspect the European managers absolutely despise. Even among the cognoscenti, there is little real knowledge of what the company really does or actually is.

Well, all this is about to change, and arguably that process began on Friday with the company’s annual results. The results were pretty good, verging on excellent. Revenue was up 29% to $19-billion, something Naspers calls “core headline earnings” (profit from operational businesses, as opposed to income from asset sales or dividends) grew 26% to $3-billion. This is not astronomical, but none of the above-mentioned companies is anything close to that, so shareholders should be relieved.

Naspers’s recognition problems stem from two issues. The entire market cap and more of Naspers is accounted for by its 31% stake in Chinese giant Tencent, which means that for many shareholders, the big question is whether the company is a cheap entry into the Chinese internet market. Investors, and Naspers for that matter, have been wrestling with that peculiar, but not unique, problem for years.

The second problem in the recognition department is complicated and goes really to the heart of what Naspers is. Is it, for example, a kind of tech private equity fund, like Softbank? If so, the management skill would be purchasing stakes in companies in the early stage of their development and taking a turn on their gradual crystallisation from worms into butterflies. Or is it a loose collaboration of operational entities, which Naspers management are actually running, as opposed to just choosing or backing?

Naspers is an odd mix of the two. Look at Naspers’ investments: they consist of an extraordinary array of brands and geographic locations. Just keeping track of all of this stuff is bewildering. 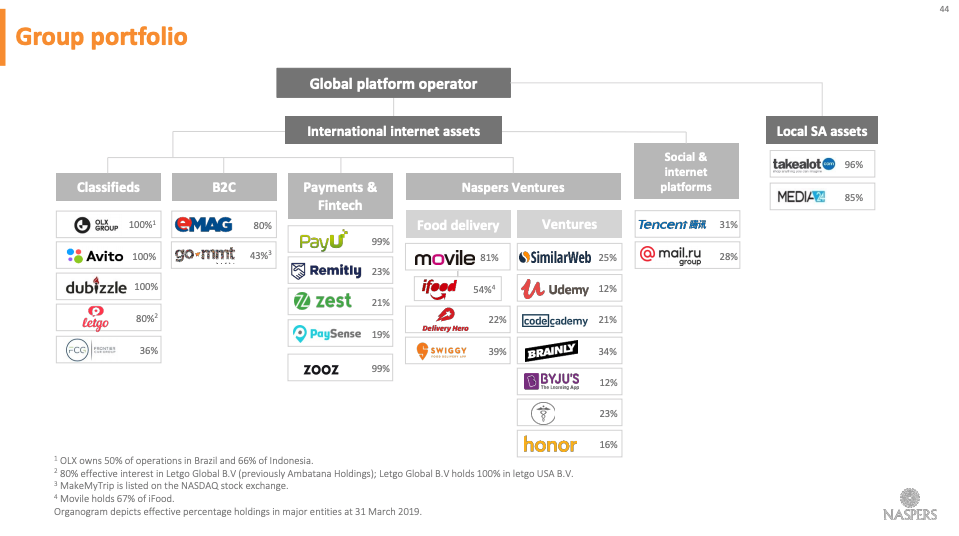 This bewildering nature of the investments is something of a deliberate strategy. Naspers former CEO and now non-executive chairman (the least non-executive in the history of all non-executives) Koos Bekker realised early on the power of being early to market, the utility of letting local management get on with it, and the need to avoid areas where the big guns (mainly the US giants) were operating. Hence, the big businesses are in Russia, China, Romania, and so on. (Yes, Romania.)

But you get a sense, this is all about to change. CEO Bob van Dijk said in the upbeat way of corporate press releases:

“This was a transformational year for Naspers. We entered FY20 well-positioned as a global consumer internet group”. Well, sort of.

After years of avoiding direct confrontations with their big competitors, now it is becoming more inevitable. And consequently, the company probably needs more recognition, more focus and probably a more active management. It urgently needs to move out of the shadow of Tencent. Interestingly, the Naspers investor pack includes a graph which purports to show the company is now growing faster than its Chinese partner.

Take one example. Naspers now has the largest classifieds business in the world (this consists of things like AutoTrader in SA; online places where you go to buy and sell stuff). You might not know it because it is named OLX in Poland and Brazil, Avito in Russia and Letgo in the US. This last company is important because it constitutes a rare investment in the US, where that little thing called eBay operates. The whole group, interestingly, is now profitable, including the US operation.

“Frankly, we do it better than anyone else,” he said. In some markets, the Naspers stable is “much more verticalised”, in the sense that the offerings are focused on a particular topic, such as cars or jobs. Local operations are “very strong”, he says, with great teams on the ground, and they are strong in local languages.

In a different way, the same sort of thing applies to Naspers’s food delivery businesses. They, too, are all over the place, and the company is pouring money into them. Van Dijk himself is dead keen on this business, saying “we are seeing five times more opportunity” than a few years ago.

Swiggy, for example, is the market leader in India and has expanded to 130 cities, up from 34 at the beginning of 2018. It was in seven cities when Naspers first invested in 2017, and in 2018 the group invested a whopping $716-million in Swiggy, bringing Naspers’ effective ownership interest to 39%.

The problem for Naspers is not just UberEATS, but also Amazon, which has just invested in UK-based Deliveroo. Here, the story is a bit different. Amazon actually shut down its own food delivery service and chose to invest in Deliveroo instead. Van Dijk says the logistics and value chain in food delivery are very different from parcels.

“The differences are endless,” he says. Food is time-critical, and half-hours make a difference. He says Amazon’s investment is really a “trial balloon”, but anyway it is a big segment so there is plenty of room for new players.

What it does show, however, is that international competition in almost all areas is coming alive. Naspers is meeting this existential change by, for a start, listing in Amsterdam which will increase its profile, and hopefully its investor base.

Yet, how many South African companies have now tried to redefine themselves through a foreign listing, for it all to come horribly unstuck? BM