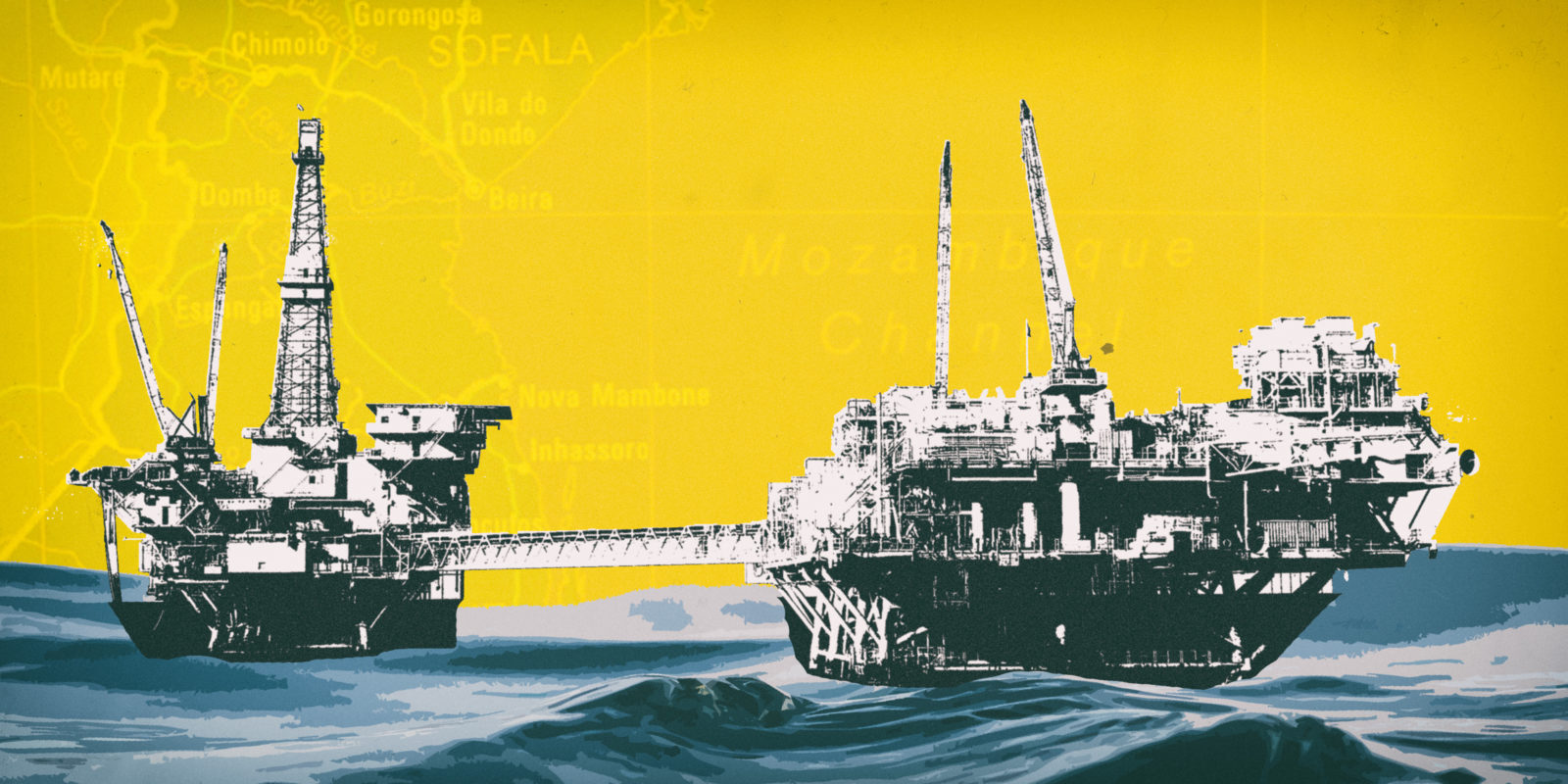 Illustration: Leila Dougan | An impoverished country with a history of conflict, graft and poor governance is more likely to be cursed by a resource windfall. Mozambique, unfortunately, falls into this category, says the writer. (Image sources: Bureau of Safety and Environmental Enforcement BSEE/Flickr / Matt Hardy/Unsplash / Map by PICRYL)

Africa has a new petro-state, or gas-state. US energy firm Anadarko Petroleum this week gave the green light for the construction of a $20bn gas liquefaction and export terminal in Mozambique. The boom could double Mozambique’s GDP. But the shining examples of Angola, Nigeria and Equatorial Guinea suggest that this hydrocarbon windfall could have catastrophic consequences for the country.

If ever there was a candidate ripe for falling under the spell of the “resource curse”, it would be Mozambique. It is in the process of becoming bewitched thanks to the $20-billion gas investment announced this week by Anadarko, which in turn is being taken over by Occidental Petroleum Corp. When that deal is done, Occidental has agreed to sell assets including the Mozambique LNG project to French oil major Total SA.

Broadly, the resource curse refers to the inability of resource-rich developing nations, notably in Africa, to translate their natural wealth into wider prosperity. Indeed, they are often beset by conflict, corruption, iron-fisted rule and a distressing failure to meaningfully diversify their economies. As long as the oil or mineral revenues keep flowing in their opaque streams to the government, which typically squanders or simply loots them, the ruling party will keep on partying, with no incentives to relinquish power at the ballot box.

Think of Angola’s ruling MPLA, or the kleptocracy that has ruled Equatorial Guinea for decades, or the National Party when South Africa accounted for more than half of the world’s gold production, and you get the picture.

An impoverished country with a history of conflict, graft and poor governance is much more likely to be cursed by a resource windfall than a mature, affluent democracy with a diverse economy. Think of Norway, which has transformed its oil revenues into a $1-trillion sovereign wealth fund.

Mozambique, unfortunately, falls into the former category. Its ranking on Transparency International’s highly respected Corruption Perceptions Index is 158 out of 180 — which means it is widely perceived to be riddled with graft.

“Alongside enduring political instability between two rival parties, corruption is a major underlying cause of the country’s malaise and has been recently estimated to have cost the country nearly $5-billion between 2002 and 2014. Blighted by endemic corruption, Mozambique presents a textbook case of a country whose legal and institutional framework has been brought into line with international good practice, but whose good governance window-dressing is unable to compensate for blatant abuses of power,” Transparency International notes in a briefing on the country.

Mozambique was the scene of a brutal theatre of the Cold War, a 17-year civil conflict between the long-ruling Frelimo Party and Renamo, which ended in 1992. There have been flare-ups since then and the rivalry between the two parties could potentially heat up as the stakes in the game have just risen dramatically ahead of the upcoming 2019 general elections. Mozambique’s economy is worth about $13-billion, so the proposed investment is larger than that by a long shot.

“At $20-billion, (the) FID is the largest sanction ever in sub-Saharan Africa oil and gas.”

The government also has an apparent Islamic insurgency on its hands in the gas-rich province of Cabo-Delgado. The World Bank notes:

“While localised, the risk that it will spread to other areas of the province and the country should not be underestimated.” Think of the Islamic insurgencies in Nigeria’s north, which has long felt excluded from the country’s oil windfalls.

Then there is the issue of debt levels, which the World Bank has said “remain unsustainably high”. Mozambique went into financial meltdown after it emerged in 2016 that it had about $1.4-billion of undisclosed borrowing on its books. There was also the $850-million Eurobond, dubbed the “tuna bond”, which reeled in investors with its promises of financing a tuna fishing fleet — sushi is all the rage these days — but instead was channelled to maritime security. There was no sushi at the end of that value chain, but investors still got a raw deal.

Analysts are sounding a cautious note, not least because taxable revenue is likely to be well over a decade away.

“Our forecast is that is Mozambique’s economy will benefit from its LNG resource, but it will be less than expected and will come later than everyone is forecasting. The government’s massive borrowing spree ahead of any actual production (along with the hidden debt from the previous government) has put the country in a negative position ahead of production, which is slated to begin 2022 at earliest,” Shawn Duthie, a Cape Town-based analyst with African Risk Consulting, told Business Maverick.

“However, Mozambique will be collecting only royalty payments at this stage and taxable revenue from companies is only expected in the 2030s, once the companies have recovered their initial expenditure.

“I think, unfortunately, that Mozambique’s gas story will be similar to Nigeria, Angola, DRC — there will be a lot of money coming in from its natural resources, but poor planning, poor governance, poor institutions and a massive amount of debt means that the average Mozambican will not see much improvement in their quality of life from the gas find,” Duthie said.

At least one ailment related to the resource curse has yet to afflict Mozambique. “Dutch Disease” is a theory that was developed after the Netherlands hit it big with offshore gas finds in the 1960s.

The dollars flowing in boosted the value of the currency, making locally produced goods less competitive. Basically, other sectors such as manufacturing and agriculture falter, while the money pouring in pays for imports to compensate for the decline in domestic output.

Mozambique’s metical, which it must be said is not the most liquid currency, has barely budged in value against the dollar in the year to June 2019. But when the money comes in, that could change dramatically — and in a way that could potentially impoverish Mozambique further. BM