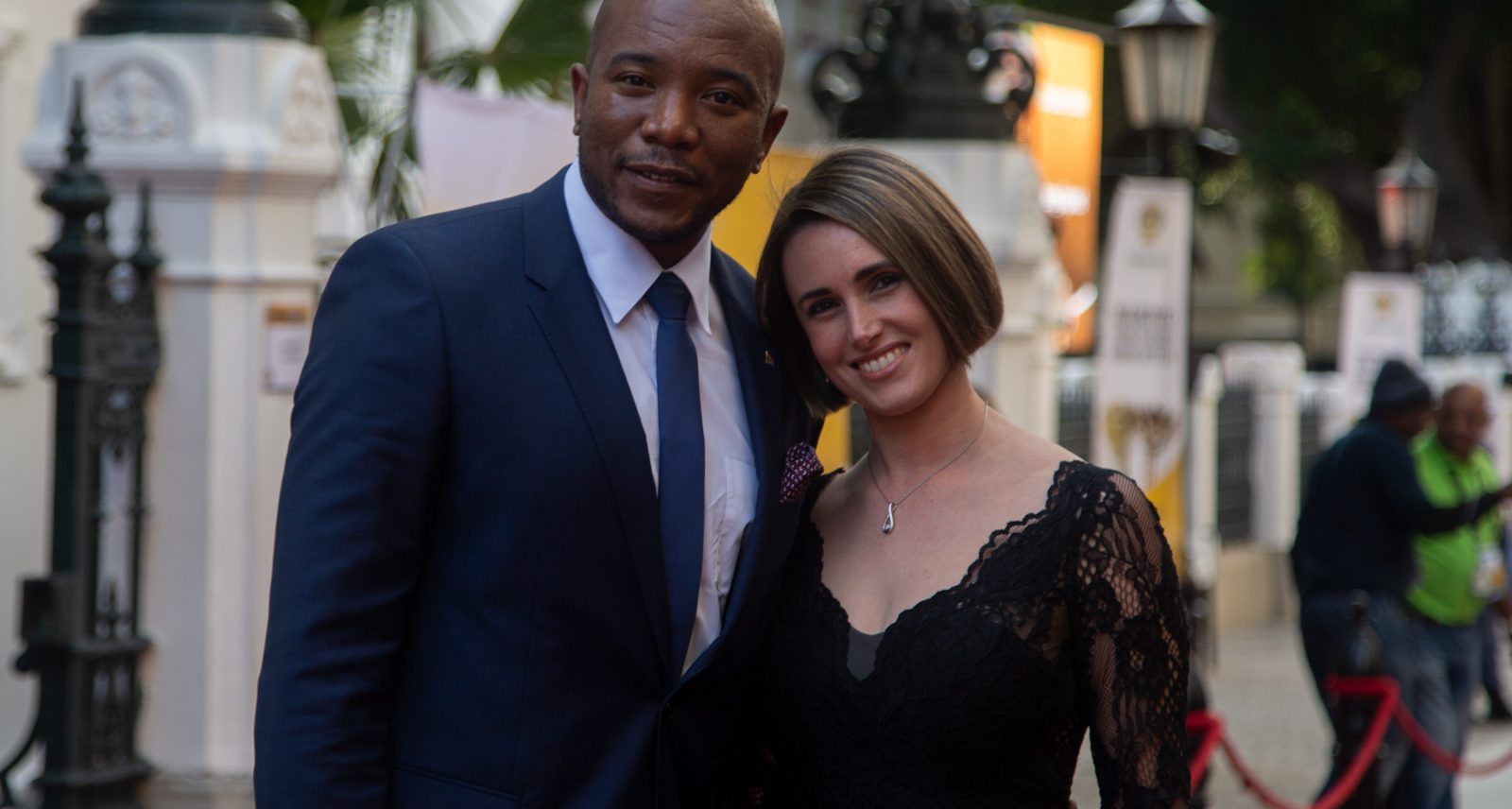 Democratic Alliance leader Mmusi Maimane and his wife Natalie on the red carpet before the State of the Nation Address on Thursday 20 June 2019. (Photo: Aisha Abdool Karim)

A second State of the Nation Address within four months is a SONA nobody needs. On the plus side, it was also the cheapest ceremony for some years. The sense of austerity extended to a somewhat sedate atmosphere, if not to the clothing choices of guests.

Cyril Ramaphosa’s first State of the Nation Address (SONA) in 2019 took place in sweltering conditions in Cape Town in February. His second, on 20 June, saw the temperatures dive in tandem with the expectations for the content of the speech.

But the media focus on the parliamentary precinct was as unrelenting as ever. A record 950 journalists had received media accreditation to cover the event, announced the Government Communication and Information Systems beforehand, with 80 community radio stations broadcasting the President’s address live.

Journalists joked about the “New Dawn” as — for the first time in recent memory — the WiFi provided for the event was ample and high-speed.

And though new Speaker of Parliament Thandi Modise had said that the occasion would be at least R500,000 cheaper than the last SONA, she confirmed that Parliament had bowed to public pressure and reinstalled the imbongi (praise singer) who had been slated to be cut to save money.

The austerity measures did not seem to have extended to the red carpet, however, where many MPs and guests still chose outfits which looked likely to have taken a fair chunk out of a legislator’s salary. Newly minted Justice Minister Ronald Lamola wore shoes by Louis Vuitton.

Perhaps the most eye-catching hair and makeup choices came courtesy of three drag queens — Cape Town’s Cathy, Holly and Molly — who arrived as guests of the DA.

DA MP Nazley Sharif also drew attention in a blue and white peacock dress with a long train which exposed some tremendous back tattoos.

Fellow DA MP Phumzile van Damme, who was in the news this week after taking the V&A Waterfront to task for failing to act against racists, told Daily Maverick that she had no intention of punching anyone at SONA.

Van Damme had brought as her guest her brother Sandile, a young winemaker.

“My husband has had his turn,” she said.

Journalists clamoured for the attention of certain parliamentarians more than others.

In demand was the new chair of the land reform and agriculture committee, Mandla Mandela — but only partly due to his new position. Mostly, Mandela was grilled on whether he had any special insight to offer into the recent tweets of ambassador to Denmark Zindzi Mandela.

“They are tweets from my aunt and let’s keep it at that,” Mandla Mandela smiled.

Chief Whip Pemmy Majodina, well known for sartorial talking points, arrived on the red carpet in a bustling flurry of red from head to toe. Majodina described her wide-brimmed hat as a “satellite dish”, and rebuked photographers: “I’m the chief whip, so I must whip you”.

Resplendent in pink was Public Protector Busisiwe Mkhwebane, who appeared relaxed and upbeat despite ongoing attempts from opposition parties to see her removed from office.

Asked by journalists how she felt about the growing volume of her critics, Mkhwebane said: “I love them. And I will protect them.”

Some politicians needed a little help from their friends to get them in front of the TV cameras. Mzwanele Manyi shepherded the leader of his political party, the African Transformation Movement (ATM), towards journalists, and introduced him as Vuyolwethu Zungula.

Zungula, who is every bit as “absurdly fresh-faced” as Richard Poplak recently claimed, was immediately asked for his response to the claims that ANC secretary-general Ace Magashule and former president Jacob Zuma were involved in the formation of the ATM.

“We’ve had these people accused of being a Zuma party for 14 months with no evidence whatsoever,” he replied.

As the guests and politicians disappeared into the cavernous bowels of the Old Assembly building, the navy band struck up President Cyril Ramaphosa’s theme song — Hugh Masekela’s Thuma Mina.

But there was a sense in the air that this time around, Ramaphosa might have to do more to woo the nation than merely quote some inspiring lyrics. DM