If Babel were a table

If Babel were a table 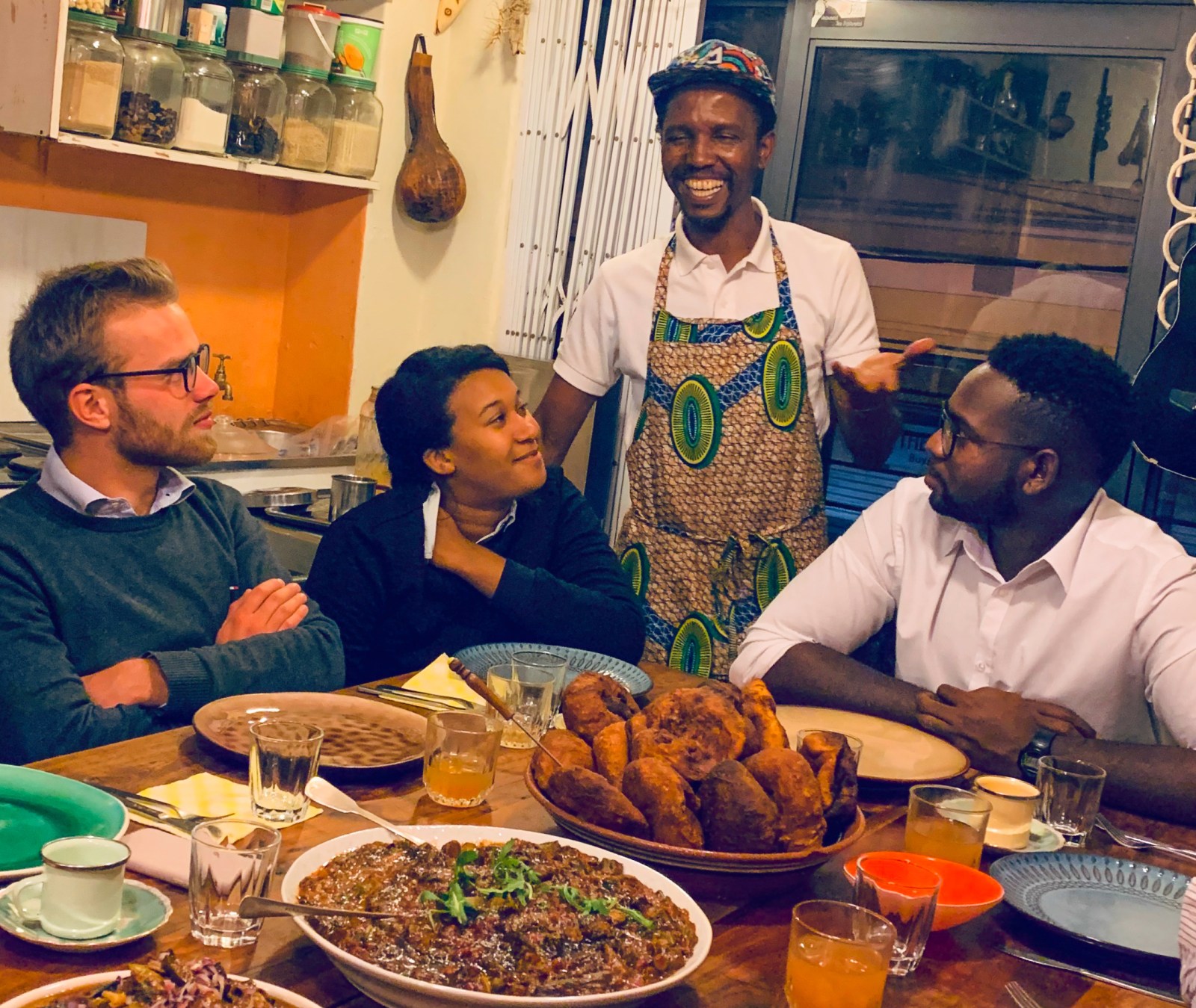 Since it’d be a table and not a tower, those around it would be talking about the food on it. It might be very like the long, wooden table of the Yeoville Dinner Club, a floor up from Rockey Street.

The table, depending on the amount of squeeze, seats 20 or more. I guessed I was number 16 but, before we settled in, Sanza Sandile put “naughty and lovely” welcome cocktails in our hands and herded us onto the balcony, above chugging Yeoville traffic.

Gwynne (Conlyn) and I had taken an Uber together and, when it pulled up, a man stepped from the evening shadows, opening the car door as soon as it unlocked.

“I’m Lloyd. Please mind the water here and here too. Welcome to the Yeoville Dinner Club. I’ll take you upstairs.”

It hasn’t rained in Joburg for weeks but he led us across those strangely milky puddles in tar gaps, down an open corridor, past a group of revellers and up an increasingly spicy smelling staircase to the Dinner Club room. There, Sanza was kissing the arrivals he knew and hugging first-timers like Gwynne.

On the balcony, I agreed with Phindile in a camel MaxMara coat, who looked South African and familiar; with a very tall Dutch guy from a foreign financial paper; and with a woman from Algeria, who wore extremely long blonde braids, that the welcome cocktail sounded dubious and tasted pretty good. The “naughty” elements were Egyptian arak and Ghanaian herbal bitters. They were mixed with local fruit juice.

Back at the long table, Sanzo’s fragrant pan-African dishes were marching right down the centre of the table, interspersed with some pretty pieces of crockery he collects for the like of their looks. There were 13 food dishes in all. There were probably the same amount of different accents and languages of the world, flanking the table.

From the sound of it, poshly enunciating Carmen had to be from the West End of London. Her hair exactly matched the turquoise centres of many of our dinner plates she was helping Sanza move from kitchen to table. Apparently he had run across her at the Market Theatre the previous weekend doing “something with participatory events”. Her parents moved to London from Hong Kong “long ago”.

All the food except dessert was part of a splendid and lengthy Pan-African course, so that paint palette effect, with daubs of everything on my plate, was to be inevitable. Bongani, the physiotherapist with the South African private school accent, who turned out to be from Uganda, advised conspiratorially that the best modus was to sample everything the first time round, then have seconds of everything that tasted nicest – and then take thirds home of anything left of the latter.

It has been becoming clear to me in Joburg lately that everyone is from everywhere. It’s increasingly difficult to make assumptions about names, appearances or even languages.

My initial daub of crisply crusted magwinya was truly South African though, tenderly steamed within. It was followed by a piled-spoon daub that was to prove deliciously moreish and reliably west African, of cassava leaves stewed with caramelised onions, even leeks, groundnuts and cumin seeds, incorporating dark lentils. After a bowl of self-pickled aubergine that Sanza deemed “an east African chakalaka”, fenugreek-flavoured, garlic-redolent and chilli-spiked, stood a generous dish of brightly flavoured jollof rice.

“It probably first emanated among the Wolof people,” claimed Sanza from the far end of the table, “got adopted by Ghana and is now marketed by who-but Nigeria!”

That Sanza is a very good cook isn’t debatable. He’s been proving that for 20 years. Never having been to chef school, he worked his way in (and out of) the hospitality industry between drama and radio stints, filling the gaps in his cuisine and restaurant knowledge, nicking spoons in the early days and bringing the world to Yeoville later.

“Dishes were always my dreams and now they’ve come to the table,” he grinned widely.

Next to me, South American looking Elena, who’s really from the Cameroon, was getting along enormously well with a pilot from another francophone country. As the interest developed, so did the frequency of her elbow jabs into my side and arm. Later, she turned her back to me, the better to gaze into the airman’s eyes. Even so, the assaults on my left side didn’t decrease. Her elbow seemed to work backwards too and when it wasn’t active, her shoulder continued the butting. We were rather tightly packed along our side of the table.

I continued scooping from the long line of dishes, onto my plate, next featuring a ruby cabbage salad, a “slaw without mayonnaise” as described by Sanza.

Instead, it was juicy with reconstituted dried red berries, ruby grapefruit and sesame oil. I was delighted that a platter of Mozambican smoked and steamed fish, not unlike Congolese carapau, was set directly before me, their tails dipping luxuriously over the rim, simply plated with lemon and rocket but nudging a bowl of creamed “chimichurri sauce”, so tasty that everyone wanted it with everything else as well.

I’d completed a palette of my plate by then but made room for some egusi, one of my favourites, a Nigerian melon seed concoction, ground with fried pumpkin leaves, much of which fell into my lap after an extra-enthusiastic Elena jab.

As we ate, multilingual conversations and food discussions began to resolve themselves into English and French mostly, as our mensa lingua, muttered by the full mouthed or whoopingly delivered by people with crumbs on their chins.

Corked glass bottles of water stood among the plates but so did jugs of rum mixed with home-made ginger beer. It seems evident now that I didn’t get around to everything else to eat on the table. I was also hunched in an odd position to avoid as many left ribs assaults as possible while I still felt their pain.

The perfume of cardomom and collapsingly poached guavas on my dessert plate brought me to some sense. They were softly festooned with yellow and green syruped kiwi fruit and a ladling of silky imazi.

A postprandial drink that Sanza had dreamed up included palm wine and sorghum beer. There was a certain milkiness to it that the pre-frontal cortex part of my brain seemed concerned about. However, I was alone in this. The people of the world were knocking them back. Elena’s pilot was keen to drink up any spares and took on mine.

When people stood as best they could to go home, a new polyglot discussion ensued about taxis and transport. One destination could be made out clearly in any of the languages. Melville, if you can believe it, is the place where two-thirds of the people of that table of Babel reside, no matter where they originated. DM