Out but not down: Banyana back to heroes’ welcome

Out but not down: Banyana back to heroes’ welcome 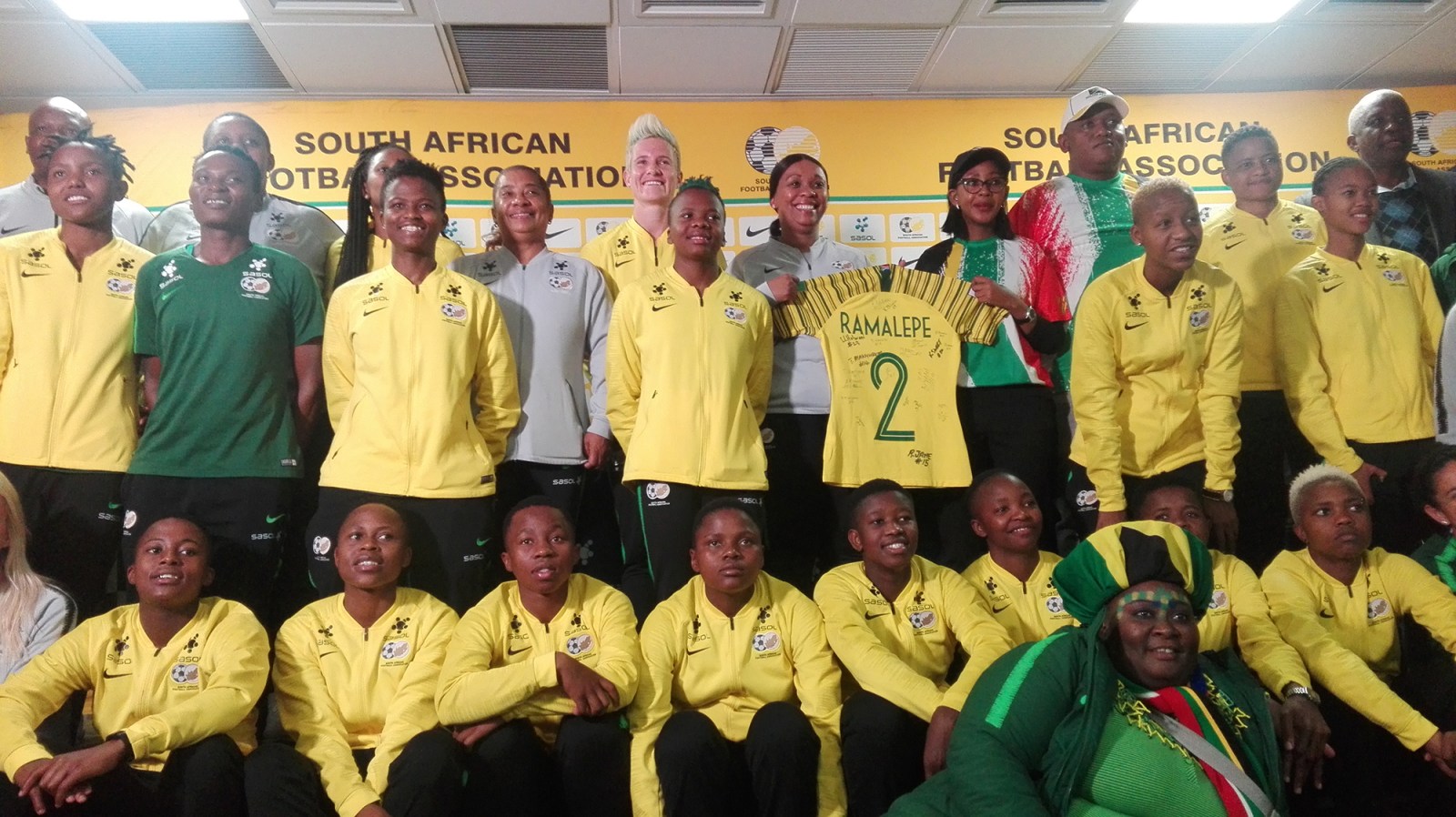 Banyana Banyana's technical team and players pose for a picture with MEC for Sport, Arts, Culture and Recreation in Gauteng, Mbali Hlophe at the OR Tambo International Airport Media Room. Photo by Yanga Sibembe.

‘The talent is phenomenal, the future is bright’ – Banyana coach Desiree Ellis on the way forward.

Banyana Banyana, the South Africa national women’s football team, landed at OR Tambo International Airport on Wednesday June 18 after they were knocked out of their maiden Fifa Women’s World Cup.

They arrived to much fanfare with fans jubilantly singing and dancing as the team made their way into the arrivals hall.

Despite not winning a game during the tournament, Banyana Banyana have shown they have the capabilities to compete at the highest level, with very limited resources. The Under-17s did the same last year at the Fifa Under-17 Women’s World Cup. Two players who participated in that tournament, Karabo Dhlamini and Sibulele Holweni, made it into Desiree Ellis’s squad for France. Banyana also have the reigning African Player of the Year, Thembi Kgatlana, in their ranks.

The notion of laying a solid foundation, and giving SA women’s football every opportunity to succeed dominated the media room at OR Tambo International on Wednesday as coach Ellis, alongside captain Janine van Wyk, and Gauteng’s MEC for sports, arts, culture and recreation, Mbali Hlophe, addressed the media.

Hlophe, after congratulating Banyana for reaching the world stage, said:

“There is an acknowledgement from government that we need to help women’s sport. We’ve been working with Safa [South African Football Association] towards the creation of a national league.”

Hlophe said the creation of this league would attract funding for women’s football. Hlophe also called on the private sector to become sponsors alongside long-time Banyana Banyana sponsors, Sasol.

Ellis highlighted the need for a professional league to ensure Banyana Banyana players are able to compete at the highest level consistently, both at national and club level.

“Some of these players train twice a week, thrice a week [at club level], sometimes they don’t pitch for training because they have to juggle football and work,” said Ellis.

“The talent is phenomenal, the future is bright. Once the structures are in place, there’s no reason we can’t beat anyone.”

Van Wyk was full of praise for her players:

“We’ve had a fantastic experience representing our country for the first time at a world cup. We really fought. Yes, we wanted to make it out of the group [stage], and we failed. But we didn’t fail to make our country proud, we didn’t fail to put our bodies on the line. We have given our everything. We left everything on the field.”

Kgatlana, speaking about her goal – undoubtedly a contender for goal of the tournament – said she was proud of having scored SA’s first ever goal at the Women’s World Cup.

Ellis added that showcasing the skills and talent of her squad was almost as crucial as progressing from the group. This was so that in future, players who represent the national team can be of the calibre of their opponents, who play in elite leagues and competitions like the Uefa Champions League week in, week out.

The team will shift their focus to the Cosafa Cup, of which they are the defending champions. This will prepare them as they set their sights on qualifying for the Olympics in Tokyo in 2020. Should they qualify, it will be for the third consecutive time. DM