Robert Caro’s Working – a masterclass in the art of biography 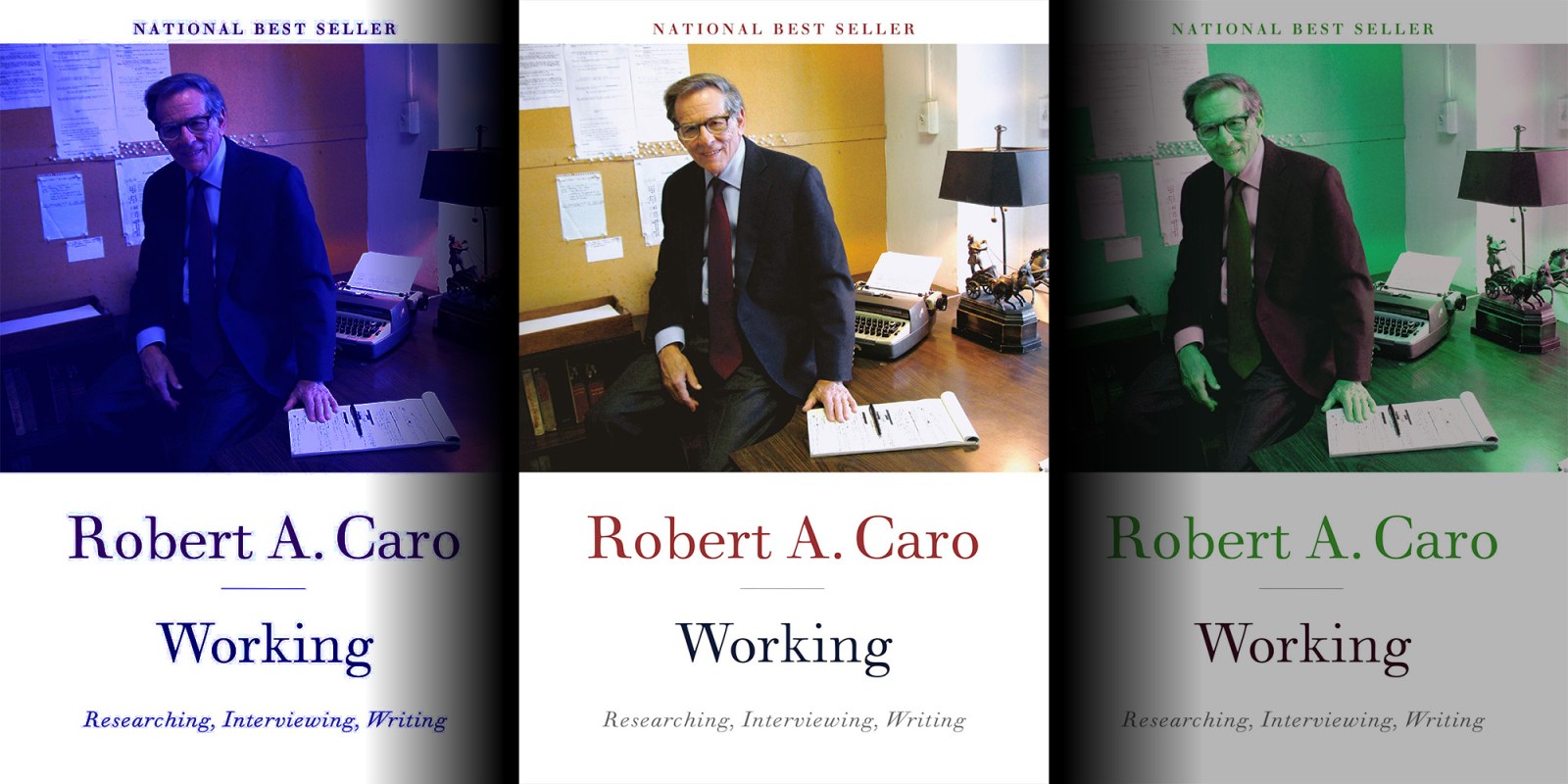 In this era of slapdash opinion masquerading as journalism and ‘ripped from the headlines’ political tell-alls with a half-life measured in months, the complete devotion to facts displayed by Robert Caro's Working should be lauded for what it is: a lasting testament to hugely significant epochs in his nation’s history.

The working habits of successful writers are surely a worthy area of study for anyone with literary aspirations. Any writer who has stared at a blank page intending to fill it with something suitable for publication will recognise the value inherent in modelling some of their own writing life on that of more esteemed scribblers. I’ve always particularly admired the daily routine of Roald Dahl, who wrote in his own writing shed in the garden, at a specifically designed desk, nothing but Ticonderoga pencils in hand, a large supply of chocolate within reach, and a lunchtime that regularly included prawns with mayonnaise and a gin-and-tonic. Eccentric for sure, but also distinctly civilised.

Dahl’s primary source material was drawn from his peerless imagination; his skill was in bringing to life fantastical characters that have an uncanny ability to entrance young minds. Another class of writers that impress are those biographers that take on the herculean task of combing through enormous archives and conducting countless interviews in an attempt to develop a narrative thread and reveal the previously unknown in the lives of great men and women.

There are few Africa-focused political biographies in recent memory that can match the depth and nuance – and sheer length if one is to read the 2007 unabridged version – of Mark Gevisser’s masterful study of the life of Thabo Mbeki. Richard Steyn’s recent resurrection of Jan Smuts, although less ambitious in scope than Gevisser’s work, also deserves credit for shedding new light on a long-neglected figure once considered among the Western world’s pre-eminent statesmen.

Gevisser, Steyn, and other biographers surely merit praise for their efforts to move beyond the headlines and provide nuance and depth to the study of complex personalities. However, I’m willing to bet that even they would express astonishment at the almost ascetic self-discipline and painstaking research techniques displayed by Pulitzer Prize-winning biographer Robert Caro.

The 83-year-old Caro has dedicated nearly all of his professional life to the study of just two men: New York City power-broker Robert Moses and former US President Lyndon Johnson. Even if one were not to study the working habits of Caro, simply placing the nearly 1,400-page Moses biography alongside the well-over 3,000 pages in the four-volume life of Lyndon Johnson (a fifth and final volume is under way) provides visual confirmation of Caro’s extreme dedication to his craft.

Fortunately for those readers fascinated with (and daunted by) Caro’s devotion to the art of biography, he has recently published a series of essays that provide insight into his motivations and his working methods. Unlike his primary output, Caro’s newly released Working is easily consumed in a few sittings, yet its impact on the reader is sure to be consequential. I turned the last page in awe of Caro’s fascination with and commitment to shedding light on the exercise of political power and its very real impacts on the lives of people far removed from the halls of government.

Caro’s working life began in the 1960s when newspaper journalism remained a vibrant profession with ample opportunities for crusading young reporters. His colourful tales of covering New York metro politics for a small New Jersey newspaper can leave one dismayed at the thought that in-depth local reportage of this type is fast becoming an anachronism in a world in which local newspapers, particularly in the United States, are closing by the week.

Of the many lessons that Caro took from his time as a cub reporter in the golden area of print journalism, one clearly imprinted itself on his lifelong working habits. After being offered his first position as an investigative reporter with Newsday, which was then a progressively-oriented New York daily, Caro admitted to his crusty, yet sagacious editor that he didn’t know how to be an investigative reporter. The response he received seems to sum up Caro’s approach to work ever since: “Turn every goddamn page.”

Caro, ably assisted by his wife/research partner Ina, has since turned millions of pages in archives across the United States. The Lyndon Johnson presidential archives in Austin, Texas presented them with the challenge of sorting through over 40,000 boxes of documents, each containing around 800 pages of material, in total around 32,000,000 pages to be turned. Caro admits that he hasn’t turned them all, but the fact that he has been an almost permanent resident of the archives since 1976 highlights his commitment to that axiom of good reportage he learned over 50 years ago.

Caro also understands that archives can only reveal so much about an individual, particularly someone with so multifaceted a personality as that of Johnson, who was equal parts committed reformer and power-obsessed strongman. Caro knew that he would never understand Johnson without understanding the impact of his toilsome upbringing in rural West Texas. Consequently, he and Ina – with all of their New York City mannerisms and patterns of speech – moved to the Texas Hill Country for nearly three years, where they painstakingly worked to develop relationships with all manner of personalities who could offer insights into Johnson, even of the most tangential variety.

Caro’s approach to the interview process – he has conducted hundreds of them for the Johnson series alone – is best described as rigorous and tenacious, yet deeply sympathetic. It can surely be said that he’s expanded his long-ago editor’s maxim to now include: “Talk to every goddamn person.”

Caro himself admits that his interview style can be infuriating to subjects, particularly those who are used to issuing commands (eg Johnson’s staff) rather than being interrogated. Caro demands of his subjects that they provide him not just answers, but a sense of place and mood surrounding an event. He has no compunction about asking a question over and over again in the hope of drawing out some previously unspoken impression. He also emphasises the importance of silence during an interview, knowing that allowing long pauses after a question will often result in unanticipated answers.

Moving Beyond the Person

One can rightly ask the question whether a single individual like Lyndon Johnson or Robert Moses is worthy of a casual reader devoting many months to journeying through their now long-gone eras of prominence. Both men had personalities that could most kindly be described as ruthless, and with behaviour and world views that were often unquestionably contemptible.

I’ll admit that I have many, many hours ahead of me if I am to read every page in the Johnson biography. It’s certainly not that I don’t find Caro’s work engrossing; it’s no more complicated than my desire to avoid lugging a 3kg book on a plane or to the beach (for some reason reading Caro on a Kindle doesn’t seem right). Consequently, more digestible works often claw their way to the top of my nightstand.

However, whenever I do encounter Caro’s prose, either in the latest volume of the Johnson biography or in his not infrequent long-form journalism (the best of which is included in Working), I realise that I’m coming to understand a world that is not just that of a West Texas ranch or the Oval Office, but also a genuinely broad history of America during immensely turbulent times.

Caro makes much the same point in Working when he emphasises that the Johnson epic is entitled The Years of Lyndon Johnson precisely because he wants the reader to understand the milieu in which Johnson was raised and in which he governed. The books are certainly about Lyndon Johnson, but they are also as much about the American civil rights movement, white poverty, machine politics, and post-World War ll economic expansion. Caro is fixated on understanding how modern America was formed as a product of the exercise of political power. The study of the lives of Lyndon Johnson and Robert Moses are outstanding vehicles for undertaking that mission.

In this era of slapdash opinion masquerading as journalism and “ripped from the headlines” political tell-alls with a half-life measured in months, the complete devotion to facts displayed by Caro, Gevisser, and others like them should be lauded for what they are: a lasting testament to hugely significant epochs in their respective nations’ histories.

The octogenarian Caro admits that the publication of Working is in large part an admission that his working life may not last much longer. Nevertheless, he makes it clear that he fully intends to complete the fifth volume of the Johnson series and to also publish a full-length memoir. We can only hope that these works will join his already unrivalled canon, but if they don’t, Caro’s legacy as one of the modern world’s great biographers will be unquestioned and the lessons he teaches writers of all varieties will remain deeply relevant for decades to come. DM

Todd Johnson is the risk leader for a large multinational company. He has previously held roles in corporate strategy, political and partnership risk management, and in the US government as a political-military analyst. He writes here in his personal capacity.