Are you listening Minister Motshekga? 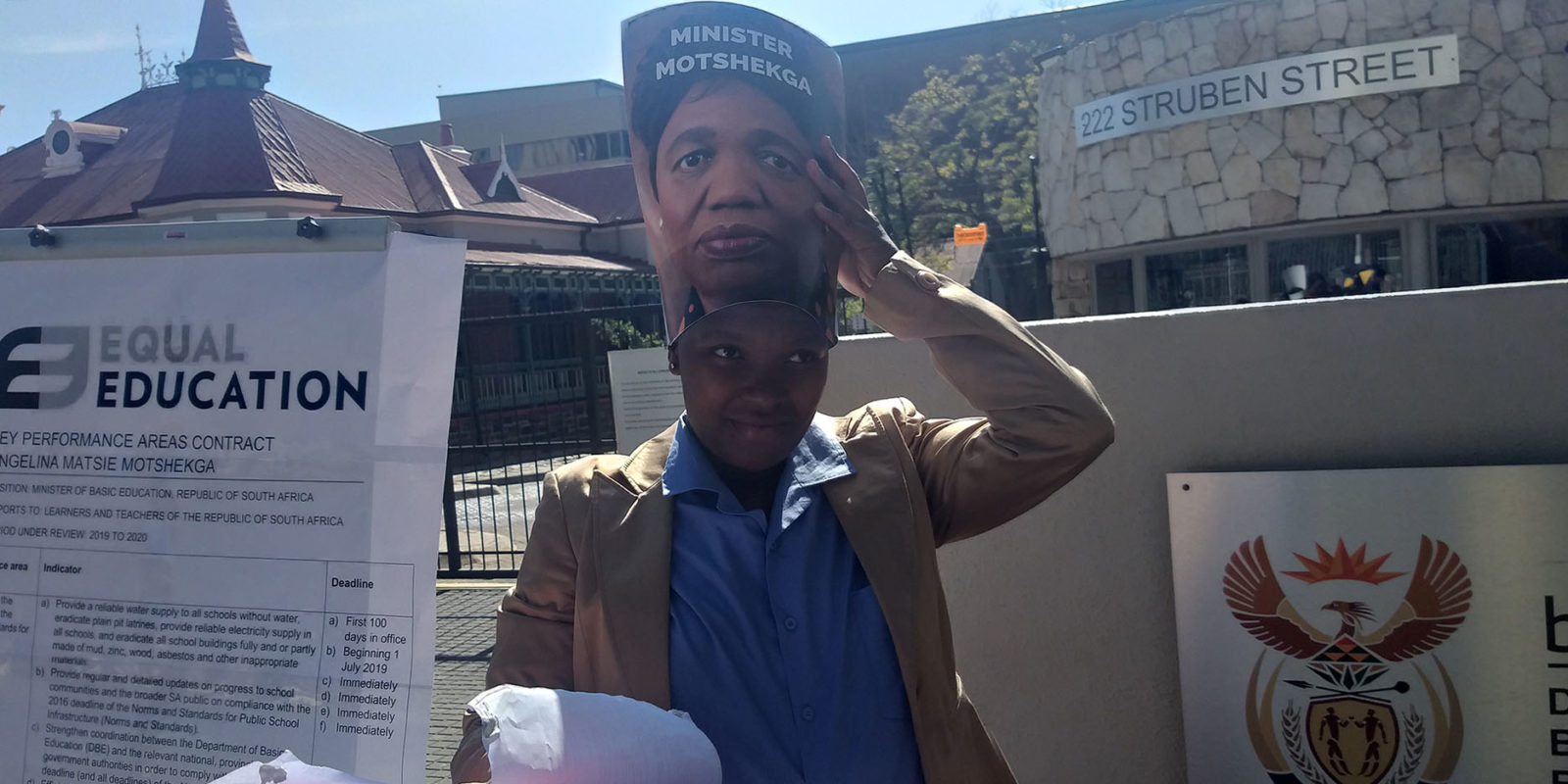 Learner Luyanda Magugu, was sworn in and committed to her responsibilities as minister during Equal Educations march to the department of basic education on Tuesday 18 June 2019. Photo: Bheki Simelane

Pupils have handed the education department a memorandum of issues they want sorted out. It’s for the immediate attention of Basic Education Minister Angie Motshekga.

Learners from five of the country’s nine provinces marched to the Department of Basic Education in Pretoria on Tuesday, June 18 under the banner of Equal Education (EE). Their aim was to highlight poor infrastructure and increasing violence at schools.

Taking her oath of office during the march, “Basic Education Minister Angie Motshekga”, Pretty Nkosi, promised accountability and commitment to addressing problems faced by learners. Nkosi also took the opportunity to express concern about problems at her own school, Thaba Jabula Secondary.

“You have girls stabbing one another at our school. Toilets are dysfunctional, while other pupils have also experienced rape,” said Nkosi.

“All we want is for the minister and the department’s officials to be there for us.”

Several pupils spoke about conditions at their schools

“It is bad, at my school pupils fight daily and they also carry knives and marijuana to class. We need help before we start losing some of our colleagues to lawlessness and violence,” a 15-year-old pupil from Soweto said.

She added, “School is no longer fun as it used to be. We are being terrorised daily to and from school because there is no school transport.”

Equal Education has identified a number of failures in the school system. These include infrastructure backlogs at schools in Gauteng, inconsistent and contradictory reports data, and a failure to effectively deal with violence.

Pupils at Tuesday’s march said their biggest concern was school violence and infrastructure backlogs, which are not new problems. In 2014 pupil Michael Komape died after falling into a pit toilet at the Limpopo school he attended.

“We have the right to easy access to education and infrastructure. Our struggle is real. We are seeing very little change while far too many learners struggle for the most basic education needs,” said Equal Education national junior organiser Tebogo Tsesane.

Equal Education’s deputy general secretary, Tracey Malawana, said she expected their issues to immediately get the minister’s attention as learners could not wait any longer.

“Officials should be accountable. We will make this place our home if the department fails to comply.”

Motshekga did not arrive to accept the memorandum, and officials from her office said she had other commitments. Paul Sehlabelo, the minister’s chief of staff, received and signed the memorandum of demands.

Among the demands contained in the memorandum were calls for the department to:

The deadlines set for the implementation of all the demands range from immediate to the minister’s first 100 days in office to next year.

“We are very happy that you are here,” said Sehlabelo. “The minister has not snubbed you, she expressed her hardship in coming here. The director-general, deputy minister and minister unfortunately had other commitments. It is not a fact that the minister does not see eye to eye with Equal Education.

“We will soon get back to Equal Education and engage around the time frames and what is possible and what is not.” DM