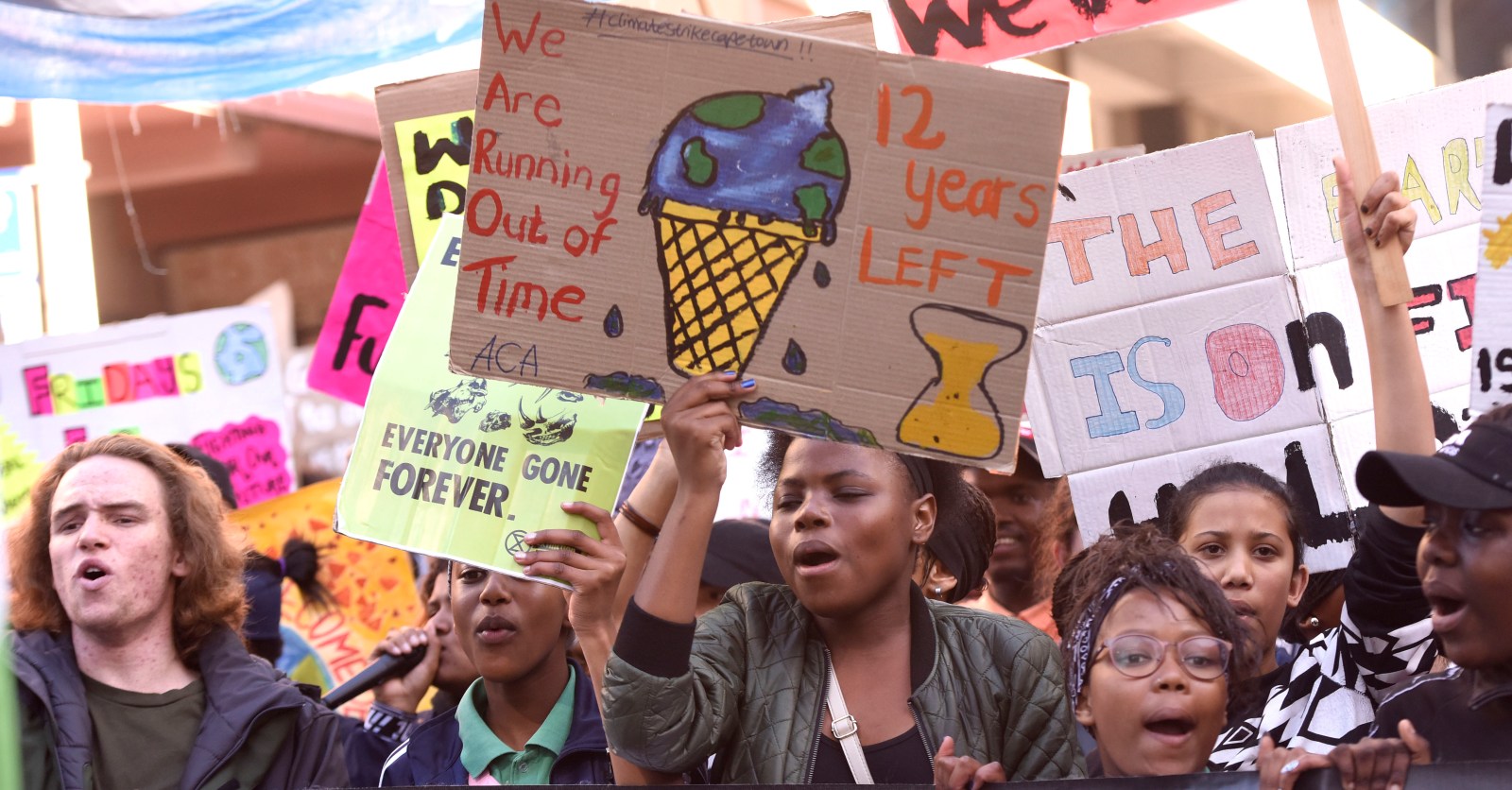 Hundreds of school children marched from Parliament to the City Hall during the Youth Climate March on June 14, 2019 in Cape Town, South Africa. The march, just few days ahead of Youth Day celebrations in the country organized by Extinct Rebellion South Africa, seeks to highlight and create awareness on climate change and adverse effects it will have in the future, if not addressed. (Photo by Gallo Images/Brenton Geach)

‘Why study for a future that I won’t have?’ That was the pointed question put forward by a teenager skipping school to protest against inaction on climate change. She was not alone in questioning what her future would look like if we failed to act. Across the country, in the build-up to Youth Day, young people rallied to demand ambitious climate action and climate justice now.

On Thursday, in the drought-stricken Eastern Cape, youth, farmers, rural communities, and unemployed peoples’ movements marched to the office of the premier to deliver a climate justice memorandum. On Friday, in flood-devastated KwaZulu-Natal, the South African Youth Climate Change coalition marched to the KZN legislature demanding climate justice.

These are just some highlights from over a dozen actions that took place across the country where young people stood up to demand climate action. They mobilised around Youth Day to highlight that climate justice is very much the struggle of their generation. To quote a letter that the South African Youth Climate Change Coalition wrote to the president:

“The youth of 1976 fought against the apartheid educational system, and today we stand with pride to say we are benefiting from their struggle. The fight against ecological apartheid and climate change is the current generation’s struggle. We and the unborn generation deserve a better future.”

Climate change is already deepening inequality and poverty, with studies showing South Africa is 10-20% poorer as a result of climate impacts. Looking forward, if we do not transform our societies within the next decade the world’s leading scientific bodies warn that we will lock in a devastating future which would wipe out much progress on development and leave our youth an impoverished world.

Apart from climate change, one of the gravest threats to our economic future is Eskom’s precarious financial position. Polluting, expensive and unreliable coal dominates our energy sector, dragging our economy down, and leaving only 68% of the population with reliable electricity access. However, with renewable energy now much cheaper than polluting coal, fracked gas, or corrupt nuclear deals, acting on climate change by shifting to renewable energy can help salvage Eskom from financial ruin.

By building a low carbon future we can also create millions of new jobs, many more than would be had by staying locked into our current polluting paradigm. Of course, coal workers are right to worry about their livelihoods in such a future. That’s why young people are calling for a just transition, which helps workers to reskill and transition into the new economy. Similarly, young people are calling for skills and training programmes so that they can enter the new economy.

Young people increasingly recognise that acting on climate change can both help avert climate catastrophe and create opportunity for them. However, so far, South Africa’s leaders have failed the youth on climate justice. Apartheid’s pollution heavy legacy and 25 years of ANC governance have left South Africa as one of the biggest carbon polluters in the world – we are ranked 114th out of 115 countries on progress transitioning to a sustainable and secure energy system.

South Africa’s pledge under the Paris Climate Agreement is ranked as “highly insufficient”, such that if everyone followed our example, we would be heading to a calamitous world of 4°C warming rather than the Paris Agreement’s safer target of keeping warming to 1.5°C. Scientists describe a 4°C future as “incompatible with an organized global community, is likely to be beyond ‘adaptation’, is devastating to the majority of ecosystems, and has a high probability of not being stable.”

With South Africa helping put the world on to such a devastating trajectory, it’s not hard to see why young South Africans are increasingly taking to the streets demanding climate justice. They’re also part of a global youth movement which refuses to allow our leaders to condemn them to an inhabitable planet.

Globally, more than a million young people have been striking from school, demanding action. Now they are calling on the adults to join them in a global climate strike to take place during the week of 20 September, and for people to do everything they can to push for climate action in the interim.

If we do not want the Youth Day we celebrate 30 years from now to be set against the backdrop of a devastated world, perhaps it’s time we listened to the youth of today before it’s too late. DM

Dr Alex Lenferna is a young South African, a Mandela Rhodes and Fulbright Scholar, and a climate justice campaigner with 350 Africa.org.