Octopus fishing in False Bay is killing Bryde’s whales, and with them, a magical and unseen kingdom 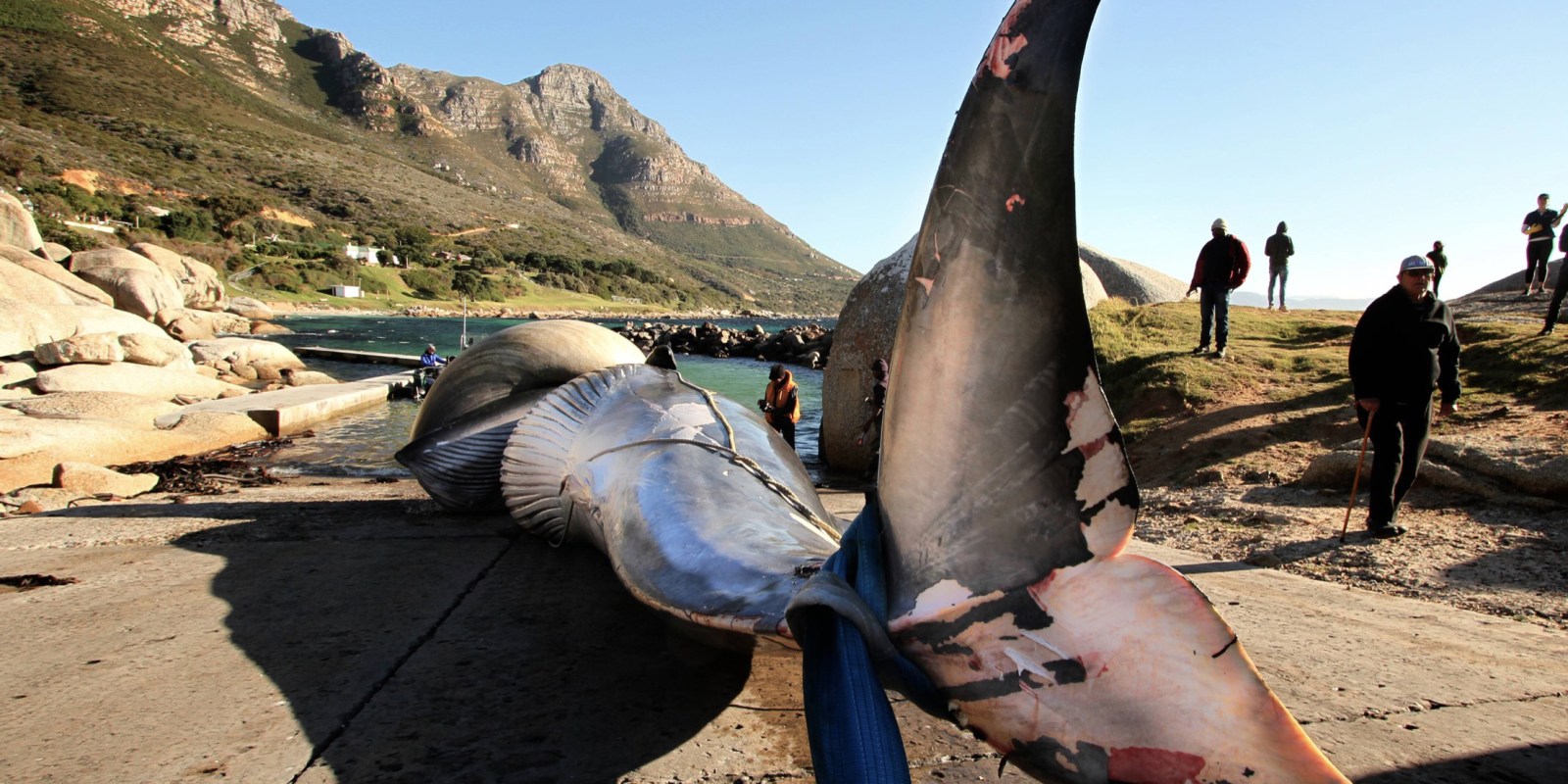 Octopus traps are particularly dangerous to the Bryde’s whale off the Cape coast as they are usually laid close to shore and have multiple lines to multiple traps. (Photo: Seachange Project)

Octopus fishing off the coast of Cape Town is supposedly being carried out for ‘research purposes’. But no research has been published and the gear being used is killing not just octopi, but also Bryde’s whales.

In a golden forest floating beneath a deep blue sea lives a liquid creature with three hearts, nine brains and eight arms. In her magic kingdom, she shares her domain with hundreds of thousands of other weird and wonderful creatures that swim and surf and glide and dig and swoop and stick. In the larger kingdom, leviathans roam and other supremes with razor teeth and eyes that track in starlight watch over it all.

Perhaps this sounds like the beginning of a fairy tale, but it’s the truth of the great African sea forest, the wondrous kelp ecosystem that lives just beneath our waters. While the average person might only see brown fronds on the surface of the water or washed-up plants on the beach, it is an incredibly rich ecosystem of biodiversity, animal behaviours and predator and prey drama as dramatic as anything found in our terrestrial forests. However, this is no Disney story but something out of the pages of the Grimm Brothers. A large dark cloud filled with wanton hunger and doom hangs over this magic kingdom.

Bouncing around like an untethered balloon in the wind, I had to keep wiping my face clear of the sea spray splashing on to my face as I raced across False Bay towards a dead whale. I was on a boat with a whale disentanglement team from the City of Cape Town. We soon came upon the whale (it was barely a kilometre from shore) bloated and dead with its grotesquely swollen tongue hanging out. The male Bryde’s whale had died after being trapped by rope lines attached to an octopus trap. This was the second Bryde’s whale that had died in 2019 and the eighth to die in the past five years. Deep gashes on its body told a tale of a gruesome and violent death.

About 450 individuals have been identified here in South Africa by Bryde’s whale expert, Dr Gwenith Penry. She’s been studying them for the past 15 years. The IUCN red list classifies the Bryde’s whales as vulnerable. Vulnerable is only a step down from endangered. At these numbers, every death is a massive tragedy and as this particular animal was a male in his prime, it’s a blow to future numbers.

Penry told me that the octopus traps were particularly dangerous to the Bryde’s whale as they were usually laid closer to shore and had multiple lines to multiple traps, which is not the case with traps internationally. Once wrapped in the ropes when they swim fast to gulp feed fish, they don’t have the strength to surface and breathe.

No data from the investigation has been made public. Indeed no data from the octopus fishery in more than 15 years seems to have been made available to an independent scientist to assess the viability of the fishery, which was the main reason for handing out an “experimental licence” in the first place. The owner of the fishery has stated that data has been handed to the Department of Agriculture, Forestry and Fisheries, but there has been no independent verification of this either. With no researcher or scientist or even an observer on the octopus fishing boat, what kind of data has been collected at all?

An experimental fishery is also not meant to be a commercial operation, and yet between 30 to 40 tons of octopus is being exported to China every year. In 2018 one kilogram of Octopus vulgaris from Morocco fetched about $14. It must be similar or quite close to the same price here, as it is the same kind of octopus that is being fished.

Penry told me that years ago she had approached the Department of Agriculture, Forestry and Fisheries about the potential danger from the fishing gear, and was told that they did not have the budgets to sink and weigh down the ropes to keep them flat in order to prevent entanglements. If they could not even afford that, on what basis is this fishery being considered viable? She has even informed them that Bryde’s whale movements between March and June were particularly close to shore and had advised that the fishery not operate in those months. However, that advice has not been followed either.

It seems absurd to me that we are not at least calling for a moratorium on this “experimental” fishery until whatever data has been collected is assessed.

There is absolutely no data on how many octopuses there are in our waters. It is being assumed that cephalopods are resilient and therefore on the increase. There is a whole movement worldwide where cephalopods, that is squid, octopus and cuttlefish, are being pushed as the next best protein option to feed a hungry world by chefs, gastropods and food scientists as we fish out everything else to extinction.

It seems absolutely astonishing that this sort of thinking is acceptable. Industrial fishing has pushed our oceans to the tipping point simply because it was predicated on the assumption that the ocean’s resources were endless. Now we know from our careless and wasteful ways that the source is finite. Yet we are happy to ascribe the same logic to cephalopod populations without proper research and study.

What have we learnt? Gary Nel, the proprietor of the Cape Town Octopus, initially claimed he was a fisherman who targeted fish and realised that this was an over-exploited resource. He switched to rock lobsters and learnt that they were down to a mere 3% of their historical numbers. This pushed him towards abalone and that, we all know, is a horror show with untrammelled poaching. This made him a champion of octopus fishing.

Basically, to me, it reads like ‘keep going down the food chain until it all vanishes’. At present close to 400,000 tons of octopus is consumed as food. However closer to a million tons might be killed, between by-catch, used for bait, and for our tables. The demand for octopus is growing so rapidly that there are plans to now farm them. However, raising cephalopods from eggs is almost impossible and octopi do not play well in groups and cannibalise one another. Experts have also warned that it is an extremely cruel thing to do a particularly curious and intelligent animal.

Octopus is the only invertebrate included in the Cambridge Declaration on Consciousness. The declaration was signed in the presence of Stephen Hawking in July 2012 in Cambridge, UK, by an international group of scientists, including cognitive neuroscientists.

Here in False Bay, from all the observations that Craig Foster, co-founder of the SeaChange project, has made over the past eight years of diving every day in the kelp forest, it can almost be certain that the octopus is a keystone species. If the octopus populations collapse, so might the kelp forest. And with it will go uncalculated biodiversity, carbon sequestration and a greater oceanic source of food.

Right now, knowing we are in the middle of the sixth mass extinction with impending biological collapse and a world rocked by hostile weather, worldwide, we fish allowing for 28.5 billion kilograms of by-catch. By-catch is the non-targeted species caught around the world and wasted. That’s 40% of what we catch to eat. By-catch in the ocean is like collateral damage in the war, morally unacceptable and disgraceful.

And instead of having conversations over how to better our fishing methods and reduce by-catch, which could go a long way toward making fishing more sustainable, we are looking to target and destroy more species.

If the Bryde’s whale was a horror show, imagine what we don’t see? Close to 650,000 whales, seals and dolphins are killed every year by longlines, fishing gear, trawl and gill nets and other fishing lines.

This Bryde’s whale, along with seven others, died in our waters for a food source that goes to China. It is an industry that does not employ more than six people.

The magic kingdom is faltering. The darkness is taking over. We need to drastically reshape our consumption patterns and how we view seafood. There’s blood in the water and the predators are waiting. We are devouring the future of our children. We are the horror in the fairytale. DM

Swati Thiyagarajan is head of Conservation and Campaign of the Cape Town-based Seachange Project, and is also the Environment Editor for New Delhi Television, one of Asia’s largest independent news networks.