Men and women looking for work on the roadside will ‘... 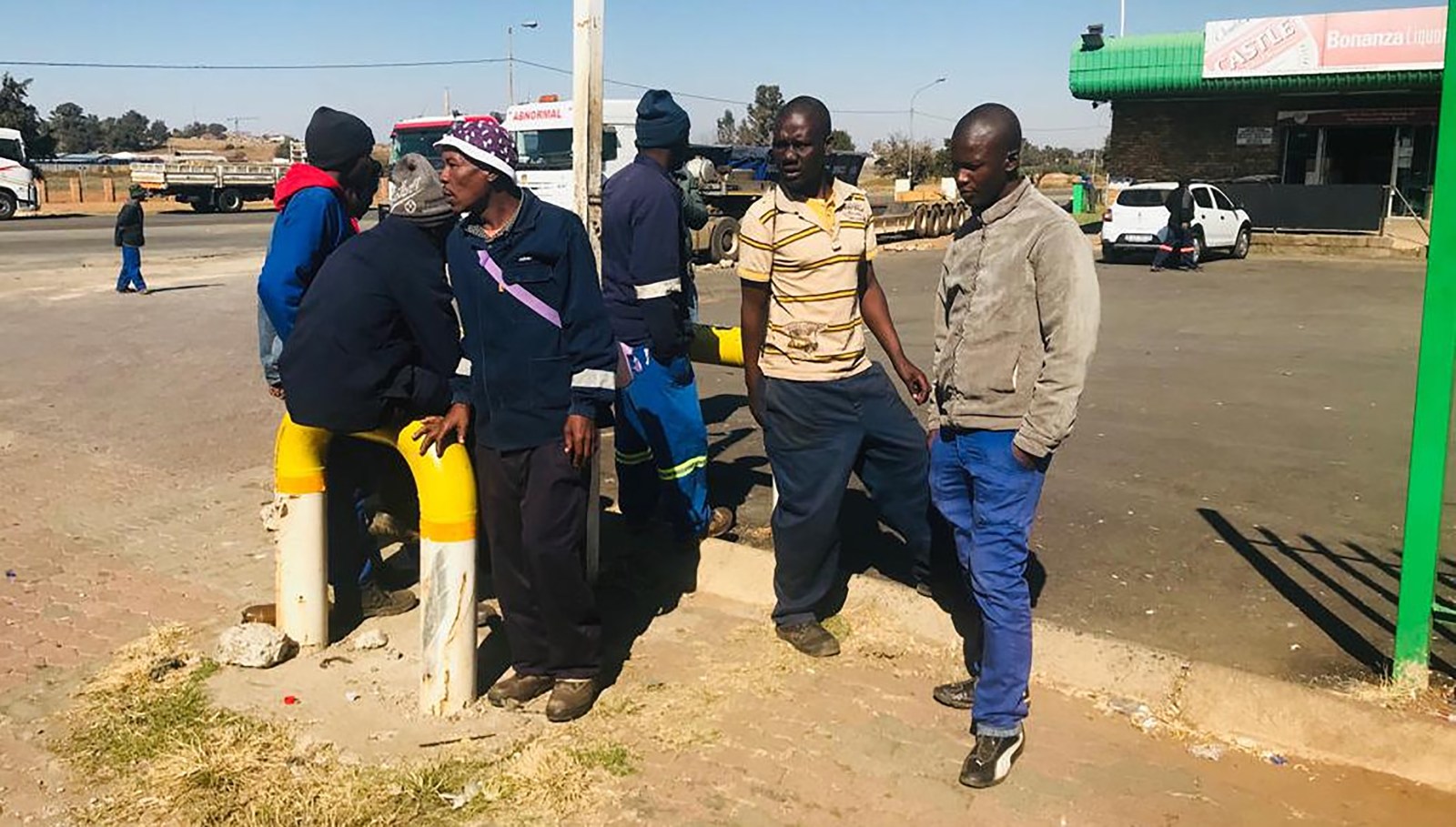 There are five places in Brakpan where men and women wait for work at the side of the road. But work hardly ever comes, and there are tensions between South Africans and immigrants. Photo: Kimberly Mutandiro

There’s a scramble for part-time work in Brakpan. By Kimberly Mutandiro for GROUNDUP

The number of places where men and women wait for work in Brakpan and surrounding towns has increased. There are now up to five spots where people wait for work. Some move around or have created their own spots hoping to increase their chances of getting work. Some of the men and women who turn out daily say they are becoming desperate and will “do anything” for money.

At times there is tension between immigrants and South African citizens as they compete for work. Some men say they will do what they see as traditionally “women’s jobs” because they need the money.

Fifteen or more men stand about at a petrol filling station in Hennie Street in Brakpan, from as early as 5am. Some are there until the early hours of the evening. Women stopped coming to this spot recently because of the competition.

Of late there has not been much work. Immigrants stand to one side while locals stand on their own. Some locals believe their chances of getting work are slim if they stand with immigrants.

“It’s better they (immigrants) stand on their own, otherwise we will fight. Employers will pick up immigrants to exploit them for cheap labour,” says Sibusiso Buthelezi from Langaville township, about 15km away. He walks and hitch-hikes to the filling station every day.

“Immigrants will take R100 or even R50. I’d rather stand here the whole day than work for peanuts.”

Buthelezi, who lives with his parents in nearby Tsakane, has been looking for a permanent job for the past five years. He has a certificate in security and also does welding. He has been coming to this spot for three years but says he has only been hired a few times. This year he has only got one job – to help offload goods at a factory.

He says he regrets having voted in the May elections and believes that all jobs in Brakpan are given to immigrants.

“We always vote, but nothing changes. White people who pick us up for work prefer foreigners.”

Buthelezi says people who commit crimes do so because there are no job opportunities.

Tshepiso Mofokeng rents a room with his wife and three children at Witpoort Estate plots in Brakpan, about 5km away. He too has a security certificate but says he cannot afford to update his Security Industry Regulatory Authority certificate in Pretoria.

Mofokeng has been coming to the spot for three years.

“It’s as if we vote for nothing. Politicians should come and address us here on the roadside and tell us when we will get jobs,” he says.

Mofokeng says he last got a job at this spot in January 2018, but he does not stop coming. It is better than sitting at home.

“We are becoming more desperate. I don’t mind being picked up to do a woman’s job,” says Martin Nkala from central Tsakane. He hitch-hikes and walks to the spot.

He has been coming to the filling station for more than three years. He has not landed a job since the beginning of the year. He says his three children depend on the school feeding scheme because he cannot afford to buy them food. At night they go to bed hungry.

Nkala says he does not mind what work he does, as long as he gets paid.

“I’m so desperate, l can do any job. Maybe l should offer special services to employers [sex work], to increase my chances of being employed.”

Some of those waiting for work are forced to beg for bread from people who come to fill up with petrol.

Some immigrants who wait for work here say they are thinking of moving because of tension with South Africans over jobs.

“The locals say we accept little money for work. They threaten to fight us, that is why we are thinking of moving,” says John Phiri, who lives at Mkhandla informal settlement in Brakpan.

Originally from Malawi, he has been looking for jobs here for more than five years.

He says he has regular employers who pick him up every now and again for gardening jobs. They pay from R80 to R150.

“It is better to take that money than nothing.”

Other immigrants said they would accept small amounts out of desperation because there is no guarantee of getting any work.

Another spot where work-seekers congregate is along South Main Reef Road between Springs and Brakpan. Men stand there from as early as 5am hoping for work. They rely on people who bring them soup and bread as they wait. Some stay until 8pm before walking back home. Others sleep in nearby ditches to increase their chances of arriving early the next day. They say only a handful of people find work each day.

Simon Matsatsi from Extension 4 in KwaThema says he has been looking for work for more than five years. He last worked at a plastic manufacturing firm in Brakpan. Matsatsi, who looks after his two teenage children, says he depends on food from a soup kitchen. He has only got two jobs on this spot since the beginning of the year.

Other people stand along Hospital Road in Brakpan, close to upmarket estate houses. Men stand on one side of the road and women on the other. People sometimes go for weeks or months without getting any work. Some say they will do any job as long as it pays. Most employers who come to the spot offer to pay R100 for a day’s job, at most. Others are willing to pay R200.

Where the women stand, immigrants and South African citizens say they do not mix. This is again because of disputes over payment rates and other issues.

“The problem with foreign nationals is that they take any money, no matter how small. They also offer extra services to employers. It’s better to stand far from them,” says Sibongile Tshabalala from Tsakane. She works three days a week in a house in Brakpan and only comes to the spot to look for extra work.

Dinani Masupa from Lesotho says some employers do offer to pay more for “extra services”.

“An employer once offered to pay R600 if l added ‘extra services’. I refused, but he still gave me R150 for cleaning his house.”

A woman who only gave her name as Sandra says she offers to add sex as an extra service when employers pick her up.

“If the money is good l take it. It’s not like l have much of a choice. Life is hard these days,” she says. DM