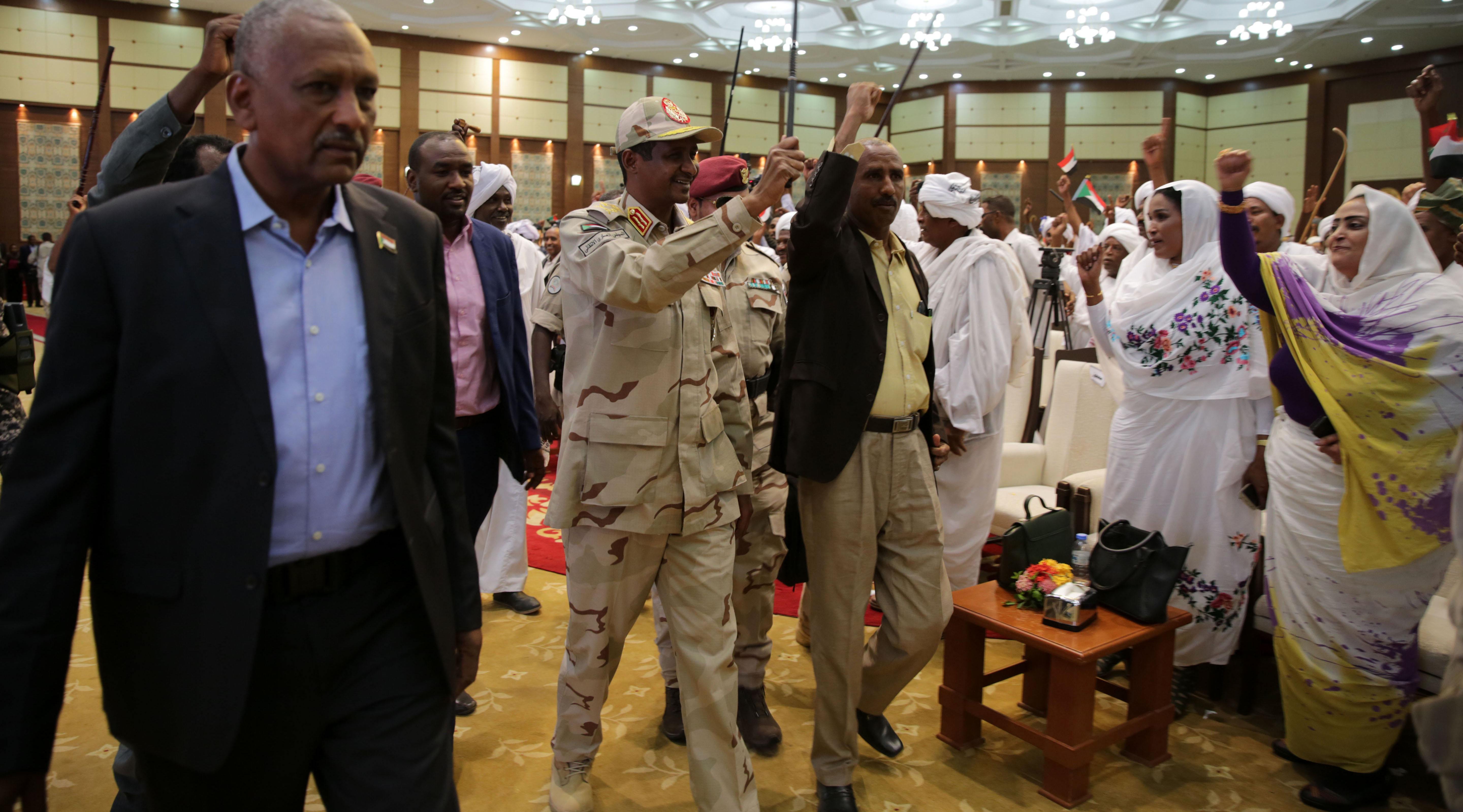 Deputy Chairman of the Transitional Military Council rally in Sudan Mohamed Hamdan Dagalo, also known as Hemedti (C) cheers with supports during a gathering in Khartoum, Sudan, 16 June 2019. According to media reports, Hemedti said the ruling military council will bring to justice those who attacked protesters at a sit-in site near the army headquarter on 03 June where dozens were killed. EPA-EFE/MARWAN ALI

The casual murder last week of at least 100 unarmed civilian demonstrators by the Sudanese military and security forces in the capital Khartoum and the sister city of Omdurman has shattered any hope of a peaceful transition to democracy in Africa’s third largest country.

Their atrocious, documented record of indiscriminate killing, torture and rape of civilians has earned them a well-deserved reputation as brigands and mercenaries, that are little more than uniformed thugs. It comes as no surprise their most recent outburst of violent depravity included shooting wounded in hospitals and raping medical staff, after which bystanders filmed them dancing in the streets to celebrate.

The latest raid and sacking of a village in Western Darfur that left a further nine civilian dead and tens of wounded further illustrate the gangsterism of the RSF as inevitably consistent. Their commander, a former camel trader turned warlord, Lt. General Mohamed Hamdan Dagalo, better known by his nomme de guerre, Hemeti, is none other than the deputy leader of the current Transitional Military Council, a cabal of Islamist generals, that replaced the now imprisoned, deposed former president and fellow genocidaire, Omar al Bashir. Arguably, the notorious Hemeti is now the most powerful member of the junta and the new face of Sudanese dictatorship, not incidentally having risen to his lofty status under Bashir’s patronage, where the RSF became the de facto Praetorian guard to the regime rewarded for its loyal service terrorising Darfur, South Kordofan and Blue Nile states.

But the ever-opportunistic Hemeti was instrumental in the military coup d’etat the Sudanese civil uprising made inevitable since mass protests broke out in mid-December, bringing millions of civilians into the streets. He felt no compunction whatsoever biting the hand that had fed him so lavishly. Despite only a second grade education, Hemeti is adept at manipulating his public image and in the aftermath of Bashir’s overthrow presented himself as a caretaker of the democratic aspirations of the Sudanese people.

It was a ludicrous proposition from the outset that a war criminal would instantly transform into a man of the people and enabler of democratic change. It is only more transparently grotesque now with the fresh atrocities perpetrated by the RSF. What is as clear is that the struggle to liberate Sudan from 30 years of brutal, kleptocratic, hardline Islamist dictatorship is far from over.

Despite vocal condemnation from the US State Department, the United Kingdom, Germany, Norway, the European Union and the United Nations over the recent massacre, these protests in practice amount to little more than a symbolic gesture. Neither is it helpful that China and Russia vetoed more emphatic censure from the UN Security Council, which Germany and the UK to their credit sought to enact.

Beijing and Moscow have long supported the Sudanese regime and Russia, desirous of a naval base on the Red Sea and the diamonds and gold of Darfur, has deployed parastatal mercenaries from the private military company, Wagner Group, the very same guns-for-hire so vital to propping up the Syrian dictatorship, to Sudan to assist the military, including in quelling the protests.

Hemeti, more important, also counts on crucial support from Saudi Arabia, the United Arab Emirates and Egypt, themselves longtime patrons of al Bashir, together with Qatar, despite the enmity between Riyadh and Doha. Hemeti has further ingratiated himself to Saudi Crown Prince Mohammed Bin Salman, by his unwavering commitment to the disastrous war in Yemen, on the verge of prompting one of the worst famines in modern history, where the RSF serve as vassal troops for the Saudi contingent.

But what isn’t often considered by the American and European public is that until Bashir’s overthrow, the Sudanese regime, notwithstanding al Bashir’s indictments for war crimes, crimes against humanity and genocide by the International Criminal Court, had been undergoing a process of rehabilitation with the US and EU. In one of the last official gestures of his administration, former president Barack Obama eased sanctions on the regime, a process that deepened under the tenure of President Donald Trump’s administration, that saw Sudanese generals hosted by their American counterparts.

Hemeti himself dined with the US Charge D’affairs, Steven Koutsis, in Khartoum just a few weeks ago, before the carnage took place. Koutsis did not seem to note anything untoward in breaking bread and exchanging pleasantries with a war criminal. A key objective of US policy in Sudan is to retain the services of the regime in what it regards as a vital outpost for intelligence gathering on Salafi extremist groups at a key strategic crossroads of North, East, Sub-Saharan Africa and the Middle East. What is befuddling, however, is that the Sudanese armed forces have retained their linkages with a host of al-Qaeda and Daesh franchises and other Jihadist groups in the region, in a masterful display of duplicity, despite lip service to the contrary by the Sudanese military.

As tensions grow between Iran and Saudi Arabia and its tripartite de jure and de facto alliance with the US and Israel, where the latter faced recent credible allegations that the Israeli intelligence service, Mossad, tried but failed to install Salah Gosh, al Bashir’s blood-spattered former national security adviser and intelligence chief, himself a central figure in the Darfur genocide, as his successor, Washington and Tel Aviv both will likely only look to preserve the status quo in Sudan, no matter the wishes of the bulk of the Sudanese people. Better the devil you know, goes the reasoning.

The European Union has a different agenda utilising the RSF as one apt observer decried as “border control from hell”, to stem the flow of African refugees fleeing war and terror to European shores. No matter that the RSF is also actively involved in human trafficking and the modern-day slave trade, the EU has funnelled hundreds of millions of euros to the ferocious paramilitaries with little oversight. Federica Mogherini, the EU diplomatic chief, is unrepentant, making her protests rather hollow.

With the chairmanship of the African Union held by authoritarian Egyptian President Abdel Fatah el Sisi, AU condemnation of the brutal excesses of the new strongman in Khartoum equally don’t muster much weight, as Cairo too only wants to keep the lid down on the bubbling stewpot of Sudan.

The AU suspended Sudan overnight but it isn’t much more than a slap on the wrist. The UN drawing down its failed, peacekeeping mission in Darfur, lacking the resources or political will to continue, is itself a dim echo of moral authority. Calls from the Arab League, Saudi Arabia and the UAE for restraint and an investigation into the killings by the RSF are at best only a pro forma exercise, of only cosmetic value so long as Arab funds flow into the Sudanese military’s war chest from the same sources, like offering a Band-Aid to the condemned facing a firing squad.

Or are we meant to believe that Mohammed Bin Salman is now a champion of human rights, when his state executioners aren’t beheading teenagers, moderate dissidents or vivisecting journalists? As mass arrests continue across Sudan and over a thousand opposition figures and ordinary demonstrators have again vanished into Khartoum’s dungeons, what has truly changed?

The TMC throughout pretends to be reasonable and hosting Ethiopian Prime Minister Abiy Ahmed as a mediator is the latest ploy in the farce of feigning openness to substantive dialogue. Small matter that opposition figures that privately met with Ahmed were instantly swept up by the RSF and are now held incommunicado. Thus we can only consider the ostensible pending dialogue between the junta and the civil society that demands their departure with little optimism, where thus far the premise of substantive change by the armed forces is little more than convenient window dressing, as unconvincing as the premise of Hemeti having miraculously adopted a democratic vocation.

Hemeti will face greater upheaval and opposition to come, as the people of Sudan after three decades of oppression have reached their breaking point, but for now the warlord is confident the methods he applied in Darfur will serve him well as means to subjugate an entire nation, in particular when he has such powerful friends and others avert their eyes. The Sudanese revolution is perhaps one of the most seminal page turnings in post-colonial African history since the fall of apartheid in South Africa and the Rwandan genocide, but it is an orphaned revolution, standing alone with little more than the courage of its people yearning for liberation.

The greatest irony is that unlike the Arab Spring, a rising against a secular dictatorship that quickly metastasised into a massive wave of Islamist extremism, the Sudanese Spring is an uprising by moderate Muslims, Animists, minority Christians and other liberal currents against Islamist tyranny in the hope of forging a non-sectarian, secular democracy. For now, while other regional dictatorships and absolutist Medieval Wahhabi monarchies aid the newest Sudanese generalissimo in the making, fearful that democratic hopes could become a contagion across their borders, the democracies of the West are content to sit on their hands as it suits their purposes. Democracy is not a universal right if you are Sudanese, especially if it infringes on the interests of great powers.

The 600,000 dead of Darfur have not mattered since 2008, when the UN froze the butcher’s bill at half the true figure. What should a hundred new corpses dumped in the streets of Khartoum and the waters of the Nile matter now? The Sudanese people remain an expendable people and it shames the conscience of the world. DM