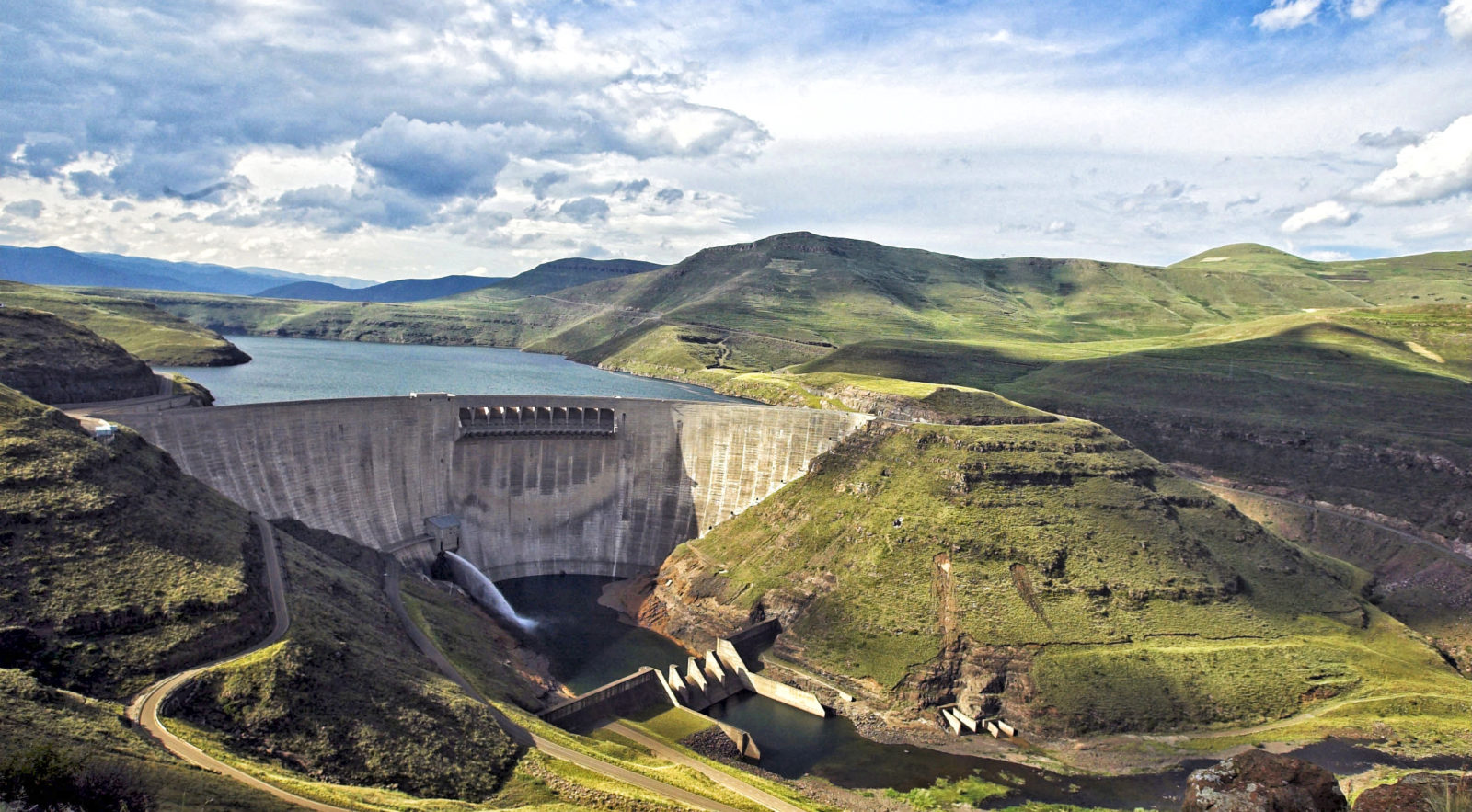 12 February 2007. Lesotho. The Katse Dam is part of the Lesotho Highlands Water Project and supplies water to the Gauteng Province in South Africa.

The MNN Centre for Investigative Journalism (Lesotho) has learned that among the 133 companies hired to carry out various projects related to the rural water programme were operations linked to the Alliance of Democrats (AD), a key member of Lesotho’s ruling coalition. By SECHABA MOKHETHI and BILLY NTAOTE for amaBhungane.

Have you ever found yourself stranded in rural Lesotho with a dire need to quench your thirst or answer the call of nature, but were forced to do your business in the bushes or drink from an unprotected well?

If your answer is “yes”, be aware that this might have been because some of the funds budgeted for rural water supply have been mismanaged or misdirected to senior politicians or relatives of ministry officials.

In 2017 World Vision reported that “80 per cent of the rural population in Lesotho still collect their drinking water from unprotected sources … a majority of them must travel more than 30 minutes to collect this unsafe water”.

This is despite the country’s abundant unadulterated water, much of it exported to South Africa. According to the Lesotho Highlands Development Authority, 15-billion cubic metres were sold across the border between January 1998 and April 2019.

Currently at issue is a controversial decision by the Ministry of Water Affairs in 2016/17 to commit an additional M90-million for rural water supply contracts when the funds were not budgeted for. The original budget for that year was M65-million.

Ministry officials claimed that the additional allocation was to fund the erection of water-tanks and taps. One of them also claimed there was no overspending because the project was a multiyear one that did not depend on an annual budget.

But Parliament’s public accounts committee last month tabled a report calling for the Directorate on Corruption and Economic Offences to launch an investigation into the alleged overspend within 60 days.

The committee noted that in 2016/2017, the water ministry’s principal secretary (PS), Khomoatsana Tau, allegedly “committed M90-million [R90-million] without authority to contract companies for water installation, and that [the committee] had heard allegations that certain rural water supply contractors started work before signing contracts”.

One of these, it said, was a company owned by Tšabiso Tau, Khomoatsana Tau’s nephew.

“For instance, Sana Building construction, belonging to Thabiso Tau (Tšabiso Tau), the son of the then PS’s brother, was given a letter to start work on 15/08/2016 but signed the contract on 15/12/2016,” the committee states.

“(Tšabiso Tau) made a claim for payment on 19/12/2016. It was claimed that the procurement processes were breached in the engagement of companies in this project in that there was no tendering process at all.”

The committee noted that it could not absolve the former PS from the malpractices observed in his ministry [because] “he was the head of the ministry who should know whatever happens in the ministry”.

It said it heard evidence that the rural water project was one of the worst construction jobs ever funded by Lesotho’s taxpayers.

The MNN Centre for Investigative Journalism has also learned that among the 133 companies hired to carry out various projects related to the rural water programme were operations linked to the Alliance of Democrats (AD), a key member of Lesotho’s ruling coalition.

Moeno told MNN: “It was a tender where everyone was given a chance to participate. It was never handed over to us. We won it because we met the specifications and delivered what was expected from us.”

Another beneficiary was Thobok Construction, which is owned by Tšepo Mohaleroe, AD youth leader and member of the party’s constituency committee. Its contract was worth R16.2-million.

Approached for comment, Mohaleroe said: “My political affiliation is private and has absolutely nothing to do with my company or business activities.

“Go to the person who gave you a bribe to tarnish my company and ask them to help with further investigations.”

Another beneficiary of the rural water programme was Refela Holdings, owned by Mohapi Khofu, a staunch supporter and financier of the AD. Khofu told MNN that his company was engaged because it was “qualified to deliver the project”.

The accusation of nepotism and tender irregularities was echoed by former water affairs minister Kimetso Mathaba.

He said that on arriving at the ministry he had launched an investigation into the rural water saga and had Tau transferred to the energy department to ward off any attempt by the former PS to interfere with it.

In some cases, work was not inspected to verify completion, and in others contractors “had totally not completed their assignments,” he said.

More details regarding this matter dropped from an ongoing fraud trial of the water ministry’s former financial controller, ‘Mampoi Makhetha, and her two sisters Tlholohelo Makoloane and Karabelo Makoloane, in the Maseru Magistrate’s Court.

Makhetha and her sisters – one an accountant and the other an office assistant in the water ministry – are alleged to have misappropriated more than M19 000 by means of misrepresentations to the Treasury.

However, Makhetha claims that she is being victimised for resisting Tau’s instructions to rubber-stamp the M90-million allocation.

In an interview, ex-minister Mathaba said that Makhetha “had refused to authorise the additional allocation because it was unbudgeted for”.

Tau had then transferred her and changed the locks of her office, after accusing her of misusing public funds and nepotism.

Makhetha alleged in court that this was intended to cover up evidence of wrongdoing. Mathaba said that Tau “had tampered with the financial controller’s office, forcibly denying her access, and some files were reported missing”.

Mathaba said that after his arrival at the ministry, he had summoned Makhetha to give her side of the story, as he believed the accusations against her should be investigated, rather than her being subjected to an arbitrary transfer.

“She told me the PS [Tau] was on her case because he owned companies registered in other people’s names that were doing business with the water ministry,” he said.

He said Makhetha had alleged that Tau wanted her to pay rural water contractors without following procedures.

Mathaba said he had instructed Tau to reinstate Makhetha in her previous position. He added that he had contemplated appointing a commission of inquiry into the rural water saga.

In his testimony in the fraud case, Tau dismissed the allegations against him as “shocking” and “discriminatory”. He insisted that Makhetha “must shoulder full responsibility for the M90-million, as she was responsible for approving the commitment”.

“Our ministry then did not account for M90-million for the payments of 2016; this was for all contractors. The Office of Accounts shows whether there is money to pay the contractors or not, not me.

“The office of accused number one (Makhetha) is responsible to pay and show that there is money to pay contractors” he added.

“I’m shocked she is not the one who knew about the finances of the ministry. I don’t know the state of its finances,” he said.

Makhetha’s counsel, Letuka Molati, put it to him that the charges against his client were a bid to conceal the true corruption in the water ministry, namely “an over-commitment to the tune of M90-million”, and that “Mapoi Makhetha is being sued to cover up the corruption in the ministry”.

Tau replied that “it is for the court to say whether they are guilty or not”. Asked by MNN to comment on Makhetha’s claim that she is being victimised, he said: “The case is ongoing and I am a … witness, let’s not go into merits or demerits lest we jeopardise the case, please!”

He told the court he had ordered the change of locks to stop [Makhetha’s] illegal access [to her office], “as I had transferred her”.

He also confirmed that Mathaba instructed him to withdraw Makhetha’s transfer and that he had complied.

“From there, it was apparent that she was now reporting to the minister and not to the PS, as is supposed to be the case,” he said.

Responding to Mathaba’s allegations about files going missing from Makhetha’s office, he told MNN that this was the first time he had heard such claims.

Molati put it to Tau that in the over-commitment, “companies owned by your relatives were involved”. He cited one of the companies as “Piti and Sons Construction”. MNN was unable to establish the ownership of this company.

Tau responded that “these things are done [allegations are made] with hatred and discrimination”.

He said he never adjudicates on the awarding of the tenders, and has no authority to stop someone from winning a contract “because he or she is related to him (Tau)”.

Makhetha testified that the R90-million allocation was eventually signed off by a former director of rural water supply, Tlali Hlasa, who usurped her powers as financial controller.

Mathaba told MNN that this was because both Hlasa also stood to benefit. He did not elaborate.

AD spokesperson Thuso Litjobo said the AD’s funding came from parliamentary allocations and rejected any suggestion that the party had benefited from the M90-million.

Cross-examining Hlasa, Molati said Makhetha would tell the court “that you [Hlasa] made an over-commitment of government funds to the tune of M90-million after having usurped her powers as the [ministry’s] financial controller.”

Hlasa replied: “if she (Makhetha) says so, she would be lying.”

In an interview with MNN, Hlasa said the M90-million was never an over-commitment. The rural water supply project was ongoing, meaning that it drew its budget from different financial years and its implementation cost exceeded annual budgets.

He added: “I didn’t sign for this. Even the financial controller was not supposed to sign for it, because it was not overspending, but a going concern.”

Hlasa and Tau resigned from their posts and contested the Bobatsi and Mahobong constituencies in the 2017 parliamentary elections under the AD banner.

Both men lost and are now back in the public service, Tau as PS in the energy ministry, and Hlasa in the Ministry of Sport as a member of the Local Organising Committee secretariat of the SADC’s 2020 Youth Games.

Mathaba’s stay at the water ministry was cut short following the dissolution of parliament and Lesotho’s 2017 snap election, which saw him becoming a member of the opposition.

He told MNN that he had passed the rural water supply issue to the current water minister, Samonyane Ntsekele, and finance minister, Moeketsi Majoro, in the hope that further investigations would be undertaken. DM

The amaBhungane Centre for Investigative Journalism, an independent non-profit, provided this story. Like it? Be an amaB Supporter to help us do more. Sign up for our newsletter and WhatsApp alerts to get more.