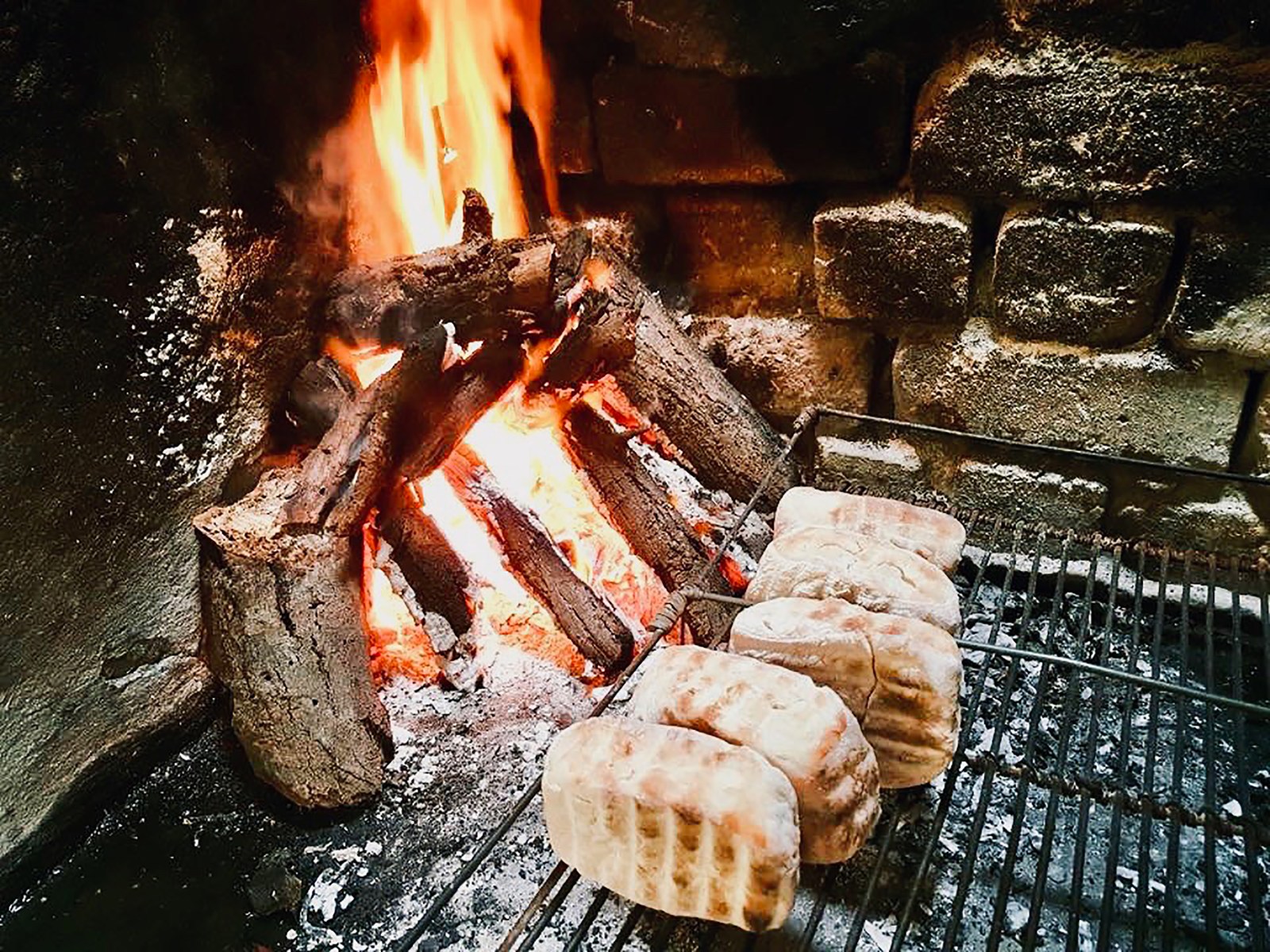 Keep your fire going while grilling your roosterkoek. It ensures a ready supply of coals. (Photo: Louzel Lombard Steyn)

My first attempt at making roosterkoek was a brave one; I had only three big blisters on my hands... but all the hairs on my forearm were singed and my face had severe sunburn, or rather, fireburn. About a third of the roosterkoek landed up in the raw coals.

South Africans are no strangers to food on fire. We love a good braai more than any other nation, I’d argue, because fire-food has been forged into our DNA since the beginning of time. For that reason, I think we boast some of the oldest recipes in the world too. Not “recipes” per se… rather food staples and methods that have stayed, engrained in our food culture since the first people sat around a fire and enjoyed a meal together.

Braaivleis, for example, hasn’t changed all that much save for the addition of salt in modern times. Mielies toasted over the coals is another simple yet highly-favoured classic all across SA, whether it be at a fancy braai in Camps Bay or a pop-up roadside stall at a traffic light in Limpopo.

And then there’s roosterkoek. Never to be confused with the other fire favourite, aka the “braaibroodjie” (braai bread roll). Albeit delicious, the braaibroodjie is more of a lovechild of the toasty-cheese and woodfire and falls in a different category to the real “fire-bread” heavyweights. I’m talking roosterkoek, askoek, stokbrood and potbrood… all recipes that require the raw dough to develop and cook over the coals.

Of all of these, roosterkoek is perhaps the most famous.

There is a definite art to making roosterkoek; it’s not simply throwing some dough on the coals and that’s roosterkoek. (That’s askoek (ash bread), actually… but more about that later.) Real roosterkoek is big and slightly rectangular, with six sides all perfectly toasted in a specific sequence on a purpose-built grill. It has a particular feel; hollow but heavy with those familiar charred lines on all sides. It leaves a residue of roasted flour when you grab it from the coals and juggle it between your hands to cool down. It must be eaten piping hot, of course.

First and foremost, making roosterkoek depends on your equipment; fire and that purpose-built grill. A roosterkoek grill might as well be added to the list of South African inventions alongside the dollos, Creepy Crawly and Pratley’s putty. Functional, effective, simple.

A typical roosterkoek grill is made with dikdraad (thick wire) that’s expertly bent and strung to create vertical lines. It has six feet reaching down into the coals, just far enough to ensure a perfect tan. Four upright sides again provide support against which developing roosterkoek can lean to toast on all sides.

You simply cannot make roosterkoek without such a grill. Luckily, every Platteland household in South Africa has one… and every Plattelandse dorpie has a skilled grillmaker who can make you one. Where I live, a legendary man known only as Kaalkop used to be the grillmaker.

“You may never, ever grill meat on your roosterkoek grill,” he used to warn whenever he sold you a new grill. Old Kaalkop has since passed away, but his legend lives on in the endless supply of roosterkoek his handiwork still enables.

Roosterkoek is ideally made with plain flour, water, salt and dry yeast. The dough is no different from any plaasbrood or potbrood. But the magic lies in the cooking. Expert hands make it look easy; fingers rubbing together, then flicking over the coals to flip the half-baked breads onto one side, then the next, creating almost identical rectangular shapes. It’s only once you try it yourself that you see how challenging it is…

My first attempt was a brave one; I had only three big blisters on my hands… but all the hairs on my forearm were singed and my face had severe sunburn, or rather, fireburn. About a third of the roosterkoek landed up in the raw coals.

Next time, I might have to resort to another fire favourite called askoek (literally translated to ash cakes). This variant of coal-grilled bread is typically made along the West Coast and in the Northern Cape, and is a favourite with the recently-voted Best Restaurant in the World head chef Kobus van der Merwe. In his book Strandveldfood, he writes:

“The humble askoek is one of my favourite heirlooms of our braai heritage. There’s something so satisfyingly primeval about cooking bread directly in the coals. The thin layer of ash that remains once the coals have been dusted off lends a delicious smokiness to this rustic bread.”

Askoek differs from roosterkoek mainly in that the latter is made on that special grill. Askoek is also less rectangularly shaped, rather odd pieces of dough slightly pressed and laid directly onto the coals. As Kobus correctly states, these types of fire-breads are “heirlooms” of our traditional South African cooking.

“The smoky taste of anything cooked over an open flame will always spark nostalgia for us South Africans.”

More than that, she says, roosterkoek is a symbol of our indigenous, ingenious African food culture.

“Roosterkoek is a favourite with many Afrikaners, but I’d like to think it does have its origins with many African communities. The first time I had roosterkoek was when my grandmother used to make it in rural Limpopo. My cousins and I would be tasked with going out to find and collect dried goat dung that she would use as fuel together with the wood and coal. She would then braai the bread over the hot coals for us to have with butter.”

Mogau says the secret to good roosterkoek is the fuel.

“The fire must definitely not be too hot – there must be no flame, just hot coals – otherwise the bread will burn and blacken, but still be raw inside.”

If made the right way, roosterkoek is perfect as is… but it is also a moreish carrier for toppings, however humble or elaborate. Roosterkoek, chakalaka and braaivleis is the classic South African combo meal. Plain, thick butter and fatty beef biltong is another all-time favourite – a celebration of not one but three Farm to Table processes, all rolled into one perfect dish. In our house, it’s casually known as a skaftien… and even this word carries so much cultural meaning in South Africa.

Legend has it that the word skaftien was first used by South African miners, who carried their lunch in a small tin, called a “shaft tin”. Later on, the word became colloquialised to skaftien. Another account says the word originated with “Skof 10” (the 10th shift), who came in after the ninth shift. Shift 10 always brought food along as it was a lunchtime shift change, hence skoftien or skaftien meant food for the miners. Another interpretation, again, states that the Fanagalo word for food used to be “skaf”, and the miners’ lunchboxes were called “skaf tins”, or food tins.

Whatever story you prefer, a skaftien means food for any hard-working South African, and more often than not, your skaftien contained either a big roosterkoek or traditional pap that would sustain you for long hours.

Roosterkoek and its other fire-bread comrades still represent that. It might be sold in posh biodegradable paper bags at fancy farm stalls these days, but it’s still a hearty staple that’s made to sustain you for long hours. Whether it be on the road, far away from home, or in your lunchbox to school.

Try making your own roosterkoek for your next braai. Remember, the magic is in the method…

1kg bread flour plus more to work with

Make a large fire with dry wood, preferably acacia or rooikrans. Have a clean grill ready. Let the fire burn out while preparing the dough. Keep one section of the fire alive, to supply coals throughout. You’ll need a lot of coals.

Dissolve the dry yeast in about a third of the warm water and let stand for about 10 minutes. Dissolve salt in the remaining water. On a clean work surface or in a large mixing bowl, make a well in the flour and add the yeast mixture. Using your hands, gradually incorporate the flour into the well. Add salt solution and continue incorporating until a soft dough forms. Form into a round shape and leave to prove in a warm space for at least 30 minutes or until the dough has doubled in size.

Knead down the dough and prove again for 30 minutes.

Sieve a layer of flour on your working surface. Divide the dough into two sections (for easier workability). Using more flour and short back-and-forth movements, roll out the dough into one long strip/sausage shape – about 10cm in diameter. Cut the strip into 7cm pieces.

Refresh coals and repeat process with the remaining dough.

Eat fresh off the coals as is, or with a topping of your choice. DM