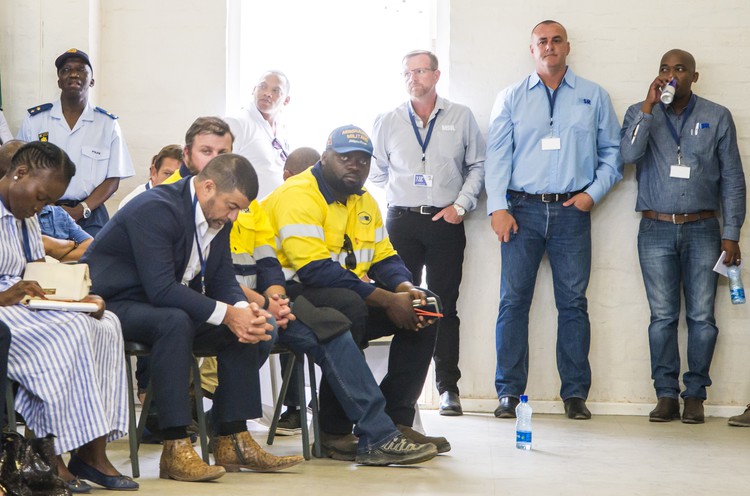 Australian mining executive Mark Caruso, in the snake-skin boots, with senior management from his company’s Tormin mineral sands mine on the West Coast to his left, and government officials, attending a community meeting with Minister Gwede Mantashe in Lutzville on 8 February 2019. Archive photo: John Yeld

More than 25% of MRC shareholders voted twice against remuneration packages for directors.

As executive chairman of Mineral Commodities Ltd (MRC), he is the only board member to survive after his four co-directors – one of whom is his elder brother, Joseph – either left, were forced out by legal intervention or were not approved for a further term. He now has three months to call a special general meeting where a new board of directors must be elected.

But the company disputes this version of events, putting a positive spin on the changes and denying that the four directors were “removed”. It says one was retiring and did not stand for re-election; another, whose term of office expired, stood for re-election under company rotational rules, although a motion for his re-election was then not passed.

Also, the company points out that some shareholders were affected by “significant voting exclusions” in terms of the Corporations Act.

MRC, listed on the Australian Securities Exchange (ASX), has two major interests in South Africa. These are on the West Coast near Vredendal, where it currently mines substantial quantities of mineral sands through its local subsidiary Mineral Sands Resources (MSR), and on the Wild Coast of Transkei, where for more than a decade it has been trying to mine titanium from the coastal dunes at Xolobeni through another subsidiary, Transworld Energy & Mineral Resources.

Currently, Caruso, MRC, MSR and one of its black empowerment partners, are collectively suing six South African lawyers and community activists for defamation relating to comments about their mining and would-be mining operations in South Africa, claiming damages totalling R11.75-million.

Their legal action is widely regarded as SLAPP (Strategic Litigation Against Public Participation) suits, deliberately brought to harass, intimidate and silence critics – a charge that MRC and Caruso deny.

The MRC board blood-letting followed voting at two successive annual meetings of the company at which more than 25% of shareholders voted against proposed remuneration for directors and senior managers.

According to ASX rules, if two successive votes of more than 25% of shareholders at annual meetings oppose the adoption of a company’s remuneration report, a “spill motion” then has to be put to the vote.

If this “spill” vote is passed, all directors other than the managing director – in this case, Caruso as executive chairman – must immediately stand down before the end of that meeting, and a new “spill meeting” must take place within 90 days where the ousted directors will have to stand for re-election.

This is known in Australia as the “two-strikes” law, designed to hold directors accountable for executive salaries and bonuses.

The use of the word “spill” is derived from Australian politics, where a “spill” is a declaration that the leadership of a parliamentary party is vacant and open for re-election.

The vote that resulted in the MRC board shake-up took place at the company’s annual meeting in Perth, Western Australia, on 30 May.

This meant the introduction of the spill resolution, which was then carried with 59% for and 41% against.

Three other resolutions – one for the rotational re-appointment of a director – were defeated at the annual meeting. “It’s very rare that this [a spill vote] actually happens, as it’s often seen as a protest vote. So investors must be pretty angry with MRC,” said Louis de Villiers, a South African lawyer and environmentalist currently living in Australia and who held proxies to attend the 2018 and 2019 annual meetings.

However, MRC company secretary and now outgoing director Peter Torre said in response to a request for comment by GroundUpthat it was “factually incorrect” to state that he and the three other non-executive directors – Joseph Caruso, Ross Hastings and Guy Walker – had been forced out by the successful spill motion.

“Mr Hastings has retired and chose not to stand for election, as clearly set out in the Company’s Notice of Meeting distributed to shareholders a month ahead of the meeting.

“Mr Walker stood for election as part of the rotational requirements set out under the Company Constitution, ASX Listing Rules and Corporations Act 2001. Mr Walker was not elected for a further term.

A further meeting would be held to consider the re-appointment of existing non-executive directors and any new directors that MRC wished to nominate, Torre added.

“At such a meeting, no voting exclusions apply.” DM