Mathane Makgatho: The woman who fought the Boys’ Club of State Capture 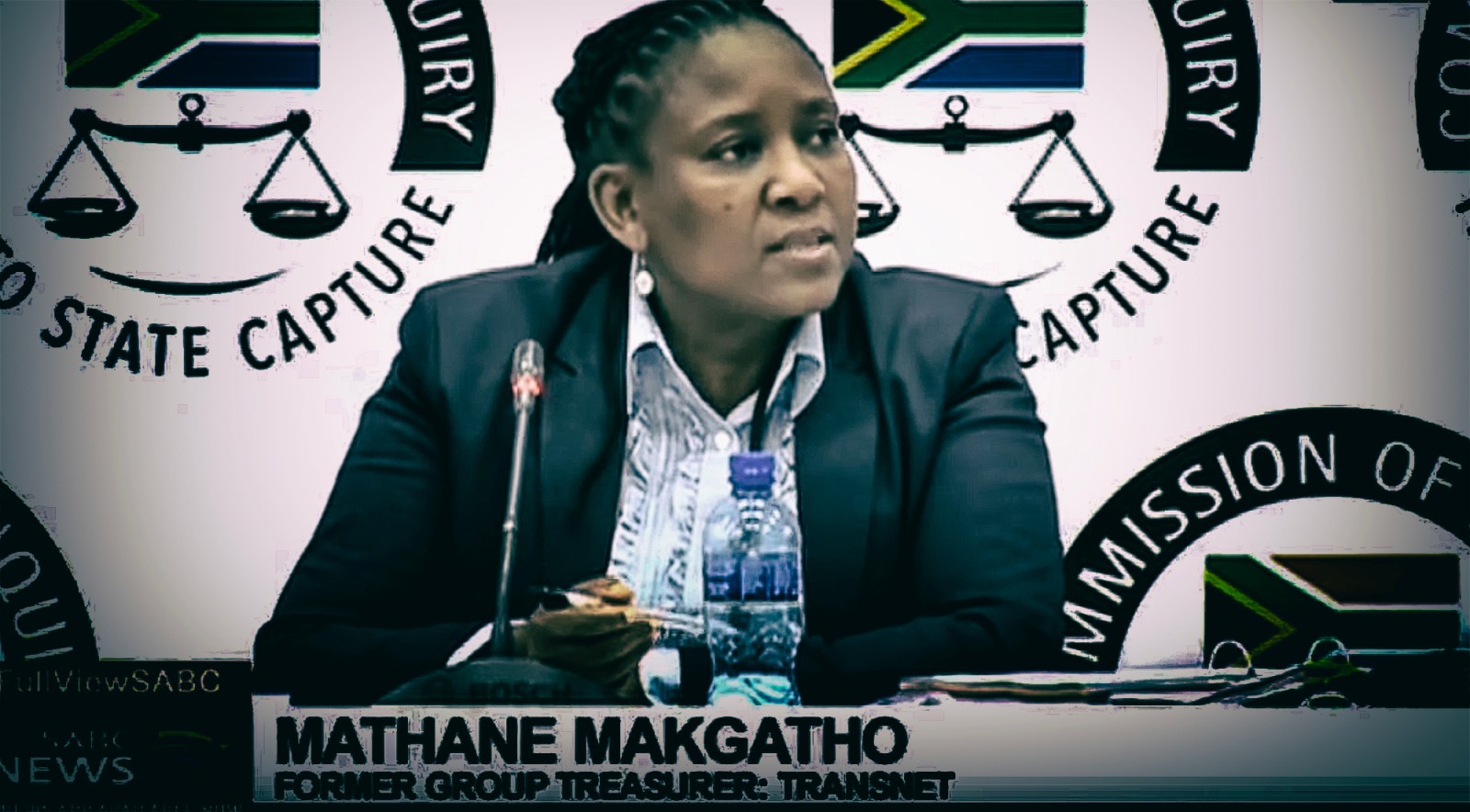 Former Transnet treasurer Mathane Makgatho never minced her words. If she thought there was no value add, she said no. If she thought it was theft, she told them so, and once, when it looked like the boss, Brian Molefe, needed more convincing that the deal was smelly, she told him straight: ‘We are going to jail if we sign this.’

Transnet has been billed State Capture Central. It is where billions of rand in deals went down under the stewardship of former group chief executive Brian Molefe and finance head Anoj Singh.

Today, it looks as if there is no question that there would have been a whole lot more had it not been for the resolve of Mathane Makgatho, a firm, a capable and resolute woman who briefly served as treasurer of the parastatal in 2013/2014.

Among deals she blocked or pushed back against was a R5-billion loan proposal at a time when Transnet didn’t need cash and a shadow credit-rating tool at R1.1-million a week pitched by McKinsey & Co while Transnet had an offer from Citi Bank to do this free.

A Fort Hare graduate with a Masters in Development Finance from the University of Stellenbosch, her CV is peppered with courses such as global executive development, financial engineering and policy formulation from renowned institutions including Gibs and Harvard.

These professional achievements, with a stint at National Treasury, no doubt served to prepare Makgatho for the days when she had to take on the Boys’ Club at Transnet along with their wunderkind cronies from McKinsey & Co and Regiments Capital.

Testifying at the State Capture Commission on Thursday, Makgatho detailed how, over the course of several deals, her bosses had sidestepped and bypassed her and a highly experienced team under her at the Transnet treasury department.

She never made it easy – especially not for Singh, who she described as a corrupt, “ticking time bomb” once when she pressed Molefe about why he had “consciously” given him so much power.

When word was sent that Singh didn’t want her in a special data room where bid documents for the 1,064 locomotives were being scrutinised, Makgatho asked the junior staff member tasked with telling her this: “Is there any other treasurer in Transnet?”

Duty-bound, she marched into the room each day for a week and reviewed stacks of lever arch files on technical, financial and operational parts of the bids — a crucial process prior to contract negotiations with bidders.

She would later realise that her bosses didn’t want her involved in the negotiations as she would be cold-shouldered at meetings with bidders General Electric, Bombardier and China North Rail and China South Rail down the line.

Makgatho testified that Singh preferred some of her more junior colleagues in those meetings because unlike her, they didn’t ask too many questions or they were too afraid to disagree with him.

Around January 2014, while teams were being assembled to negotiate the controversial 1,064-locomotive deal, Regiments suddenly submitted one of several unsolicited proposals to act as Transnet’s adviser in the deal.

Makgatho saw only a “very vague” proposal that offered no value to Transnet — and it contained nothing that her own team couldn’t handle.

She met with Regiments director Niven Pillay and asked him to revise the proposal with specifics, believing she could then reject him based on his own facts, she testified.

She then informed Singh, who was allegedly annoyed that she had requested a revised proposal and, unknown to her, Regiments was anyway appointed weeks later.

“I did not know they were so entrenched in the business, but going through the payment run, I was actually shocked beyond words,” she said.

She testified about a call from someone at Nedbank asking if Transnet was in the market for cash because Regiments had sent signals out to the market — on behalf of Transnet.

She told the caller that if Transnet was looking for cash, she would have known about it and if there was a need, a tender would go out.

“The following Monday, I received a proposal from (Mr) Singh for a R5-billion loan, stipulating the lender was to be Nedbank. This was a plain vanilla loan structure that Transnet’s treasury team could have handled.”

He allegedly gave her a proposal containing a provision for a middle-man, Regiments, that would result in Transnet coughing up an extra R150-million a year over five years.

Makgatho told Singh she couldn’t recommend the deal; that it was too expensive.

“He told me to go back and do a recommendation the same day because the GCE (Brian Molefe) wanted it the same day.”

“I told him it’s a waste of money, but he would not listen and kept referring to Mr Molefe.”

By then Makgatho says she had had enough of both Singh and his Regiments cronies. She went straight to Molefe to ask him about the proposal he supposedly wanted executed so speedily and she didn’t mince her words.

‘Are you prepared for R750-million to be stolen?’

“Are you prepared for R750-million to be stolen?” she asked him.

“I was just straight and told him: ‘If you approve this, jail time is waiting for you’.”

Molefe, seemingly shocked, told her she was right and said he would handle the matter. Asked what he had said about Singh’s claim that this was his request, Makgatho told the commission:

“I don’t remember giving him a chance to respond to whether the instruction came from him.”

But the “shocker of note,” came in the form of another unsolicited proposal, handed to her by former Regiments partner Eric Wood during a meeting with Singh.

The company sought to have Transnet use the South African Reserve Bank (SARB) as a counter-party in cross-currency swaps.

Makgatho says she knew that government had taken a policy decision years ago that the Reserve Bank would not step into this space as the financial risk to the country was too great.

“That policy shift had been widely publicised and now these ‘experts’ came in with this no-go type of proposal.”

By now Makgatho was out of patience with both Singh and Wood.

“I didn’t even want to discuss this with Anoj (Justice Zondo had to repeatedly remind her to refer to him as Mr Singh) so I went straight to Mr Molefe.”

“I was like, ‘GCE (group chief executive), your people (Wood and Singh) have outdone themselves this time around. Here is a proposal. They recommend we go to National Treasury and present that we use the SARB as a counter-party for our swaps’.”

Molefe, she said, was very decisive and immediately agreed with her.

Fed up, she confronted Molefe about why he had been giving Singh so much power. Singh, she says, was doing as he wished

“So I asked him ‘why are you giving him so much power? You know he is not a man to be trusted’.”

Makgatho says she had early on decided that Singh was reckless and “very corrupt” because he was consistent in his mission.

She only later realised that Singh and Molefe were cut from the same cloth. “The only difference is that one was rough and arrogant, the other one, just more smooth and street smart.”

She spoke of another unsolicited proposal around mid-2013, this time from McKinsey. The Transnet treasury had been working on creating a credit-rating methodology tool to help forewarn them about what position international rating agencies could adopt for Transnet at particular intervals.

Citibank had actually previously offered to provide credit rating management services free. Makgatho wanted to rejig her team to create a team to work on this plan and kept Singh informed.

Again, Makgatho said no thanks.

“I decided my team can do this, you don’t even need a degree in math.”

This time though, she says, Singh was livid and seemingly didn’t understand why she didn’t want to use McKinsey and accused her of thinking she knew it all.

“I don’t know it all but I was surrounded by highly experienced and qualified people.”

In the end, she says her own team delivered and Transnet’s internal shadow-rating tool was aligned with that of the international rating agencies.